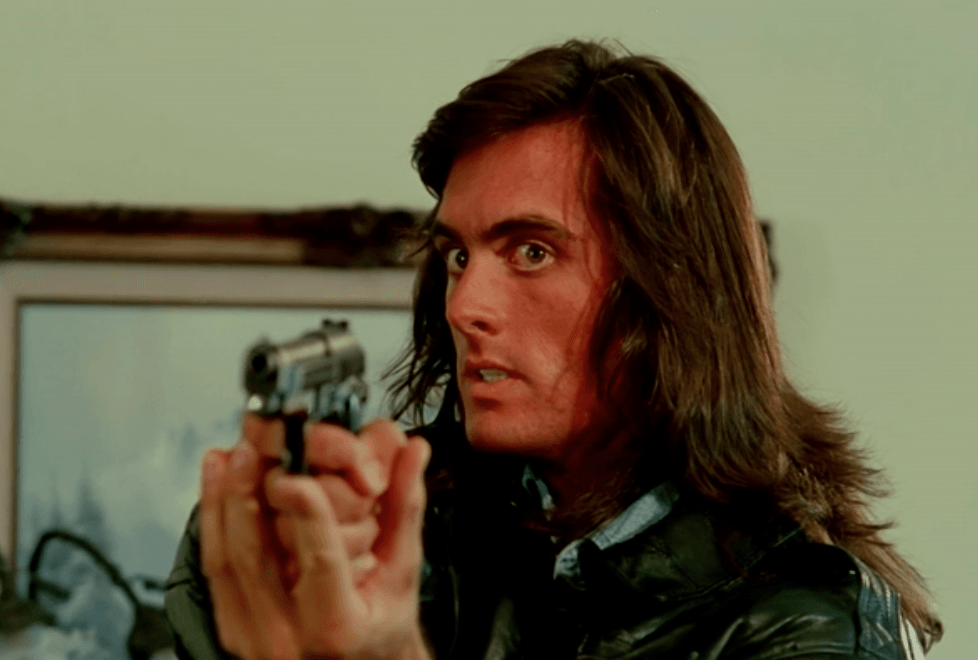 There’s a scene in Hard Ticket to Hawaii, the 1987 action flick by BBB (bullets, bombs and boobs) director Andy Sidaris, where DEA agent Rowdy Abilene (played by Ronn Moss) yells out to a girl jogging away from him on the beach: “Hey Colleen! You’ve got a great ass.” Colleen’s response? “So do you, pilgrim.”

Bad lines and action movies go together like grilled cheese and tomato soup. Some of this cheesy dialogue, like the aforementioned line, is intentional. Hard Ticket to Hawaii was always meant to be tongue and cheek, and in this case, it works. But, there are plenty of lines in action movies that fall flat, bringing the action to a grinding halt, and leaving the audience groaning.

These are some of those lines.

Synopsis: Mathew Karedas is Samurai Cop. He’s a cop, who’s also a samurai. I mean, what else do you need? The title alone sells itself.
Who said it: Robert Z’Dar as Yamashita
Quote: “I will bring you his head, and I will place it on your piano.”
Why it’s bad: In a movie filled with epically bad dialogue (like this speech) it’s hard to find a line that wouldn’t end up on this list. But the last thing anybody really wants is a rotting severed head on a white baby grand piano. That’s how you get ants.

Synopsis: Rudy (Jean-Claude Van Damme) is a thief go goes to Israel in search of his father – an archeologist on a quest to find religious artifacts. Basically, Indiana Jones with Han Solo in the lead role.
Who said it: Jean-Claude Van Damme as Rudy Cafmeyer
Quote: (answering the question: Did someone get shot?) “No. I Farted.”
Why it’s bad: Farts are funny. Fart sounds are funny. Trying to cover up a fart by coughing or asking, “did anyone see that elephant?” is funny. I the middle of a shootout, it just doesn’t work. Sorry, JCVD. Any line would have been an improvement, including something as juvenile as, “No, it’s your mom.”

Synopsis: In what could be described as the only movie co-produced by the Lifetime and Spike networks, Captain Matt Hendricks (Dolph Lundgren) teams up with former fiancée Dr. Linda Christian (Meilani Paul) to keep a dangerous chemical weapon out of the hands of terrorists. Will they fall in love again?
Who said it: Dolph Lundgren as Captain Matt Hendricks, Meilani Paul as Dr. Linda Christian
Quote: Dr. Linda Christian – “You’ve never heard of Agent Red?”
Captain Matt Hendricks – “It sounds like a bad action movie.”
Why it’s bad: You really need to break the fourth wall with a line like this, wink at the audience and give them the silent “wha whaw.” In this case, however, it was an astute observation about the quality of this movie. I really hope this line was adlibbed.

Synopsis: Sgt. Chris Kenner (Dolph Lundgren) and partner Johnny Murata (Brandon Lee) go up against the yakuza to keep a beautiful woman (Tia Carrere) alive long enough to testify again its leader.
Who said it: Brandon Lee as Johnny Murata (to Dolph Lundgren)
Quote: “Kenner, just in case we get killed, I wanted to tell you, you have the biggest d*** I’ve ever seen on a man.”
Why it’s bad: Ok, this line is pretty funny. I’d give it a pass, but the first time I heard it I was like, “wait, what?” Speaking of Tia Carrere, you ever watch her show, Relic Hunter? It was actually pretty cool. Not groundbreaking, it was basically Tomb Raider, but still worth checking out.

Synopsis: John Spartan (Sylvester Stallone), wrongly convicted and sentenced to cryro-prison, is woken up in 2032 – now a society free from crime – to help the San Angeles Police track down and capture Spartan’s old nemesis, Simon Phoenix (Wesley Snipes).
Who said it: Sylvester Stallone as John Spartan
Quote: “You, get me a Marlboro.”
Why it’s bad: Nobody in the history of smoking has ever asked for a loosie by brand name. A pack of cigarettes? Yes. And, I know, there have been hundreds of studies done on brand loyalty of cigarette smokers, but beggars are never choosers. Maybe if Spartan asked for a Winston and then sung the old Winston jingle like Fred Flintstone did – Winston tastes goooood, like a cigarette should – that would have been something!

Synopsis: Blade (Wesley Snipes) is a half-man, half-vampire who wears a lot of leather while protecting humans from a gang of evil vampires.
Who said it: Wesley Snipes as Blade
Quote: “Some mother******s are always trying to ice-skate uphill.”
Why it’s bad: In a movie with no ice, or skating, or cold conditions, or a hill, it really comes out of nowhere. It ends the entire scene on a total WTF moment. I can think of a bunch of other cheesy one-liners they could have used: No mis-stake about it. Sink your teeth into this. This is going to suck. Time to see the light. Die, you stupid vampire jerkface.

Synopsis: Jack Caine (Dolph Lundgren) is a good cop who doesn’t play by the rules. When he isn’t beating drug dealers to a bloody pulp, he’s making time for his special lady. Oh, there’s an alien drug dealer who is killing people to steal their endorphins and sell them on his home planet. He keeps saying, “I come in peace,” but does he really mean it? The answer: no.
Who said it: Dolph Lundgren as Jack Caine
Quote: “F— you, spaceman!”
Why it’s bad: This movie has the distinction of having both a terrible one-liner (this one) and a fairly clever one (when the alien tells Caine “I Come in Peace” and he replies, “And you go in pieces”) within one minute of each other. They could have replaced the spaceman line with just anything else and it would have been an improvement – even “Some mother******s are always trying to ice-skate uphill.”