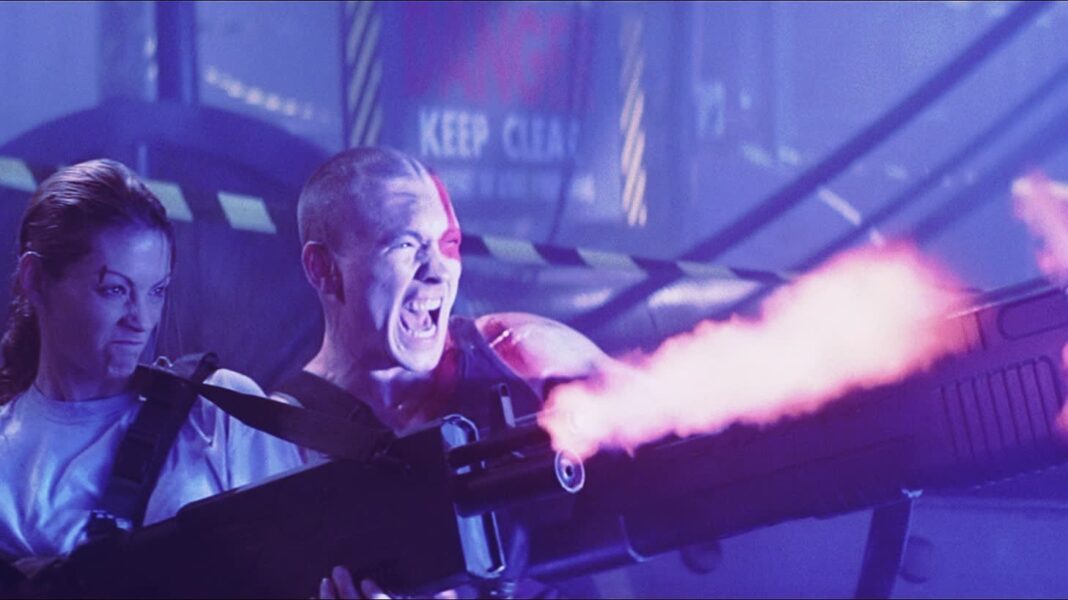 Before there was a Blade, there had to be a Death Machine! 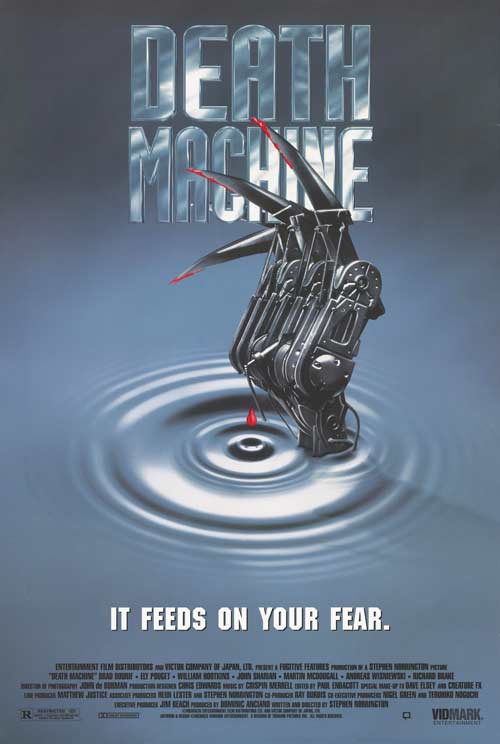 By the early 1990s, all the masterpieces of modern Sci-fi action cinema were already made, and a wave of copycats was unleashed onto video stores. Only a tiny amount of them was actually able to do justice to their source material, and Death Machine takes the pole position as far as medleys to the 1980s classics go. Stephen Norrington crashed into the scene with his debut, and he must have impressed some people with it.

Four years later he was handed directing duties for Blade, which became an instant classic, and for better or worse also relaunched the Marvel cinematic universe into modern times. His career crashed hard, though, after the seemingly frustrating experience of shooting The League Of Extraordinary Gentlemen. But with Death Machine (and Blade) Norrington left a terrific legacy for action movie fans, and in this article we will have a look at this manifestation of the creative raw energy of an aspiring film-maker.

There is a Psycho Death Bot on the Loose!

A cyborg super soldier engineered by the Chaank Armaments corporation malfunctions and goes rogue during a mission. Hayden Cale is the new CEO of the company, and is tasked to handle the aftermath of the disaster and restore the reputation of the company. One of her first orders is to get rid of Jack Dante, a deranged engineer who led the cyborg program “Hard Man”. After Hayden rejects his sexual advances, he locks her, the executive board and two human rights activists up in the corporate tower, and unleashes his latest creation onto them.

In the near future, everything looks hazy and a corporate tower becomes hell on earth, just like in real life for many people. Death Machine assembles its plot and characters from all the classics we love. It is a 6 Million USD fan film of sorts, but never falls into the usual trappings of this type of movies. The list of building blocks that are inserted from other works is long, very long indeed, but the film carries this stigma proudly.

Hard Technology for a Hard World 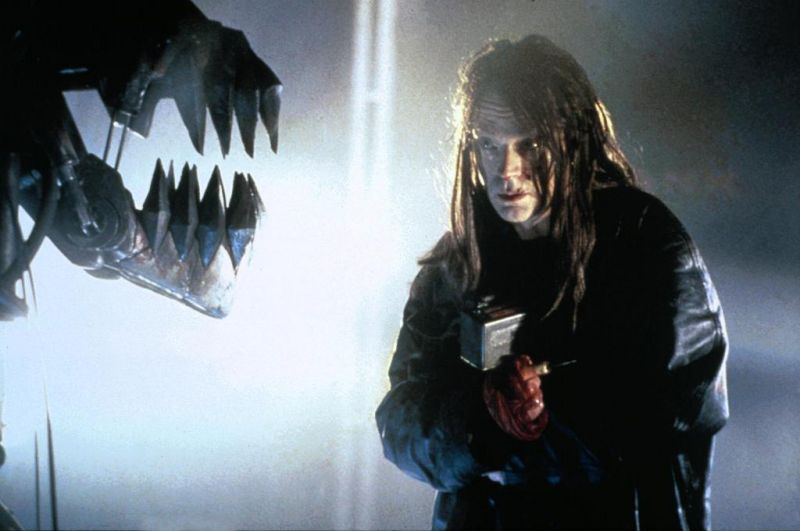 The cyborgs are taken from Universal Soldier, the cyberpunk aesthetic from Blade Runner, and the monster looks like a hybrid of Robocop’s ED-209 and the Alien. The names of almost all characters are also fairly self-explanatory (among them Cameron, Carpenter, Ridley, and Raimi). And main protagonist Hayden strongly resembles that of Ellen Ripley, a woman who is forced to take up the desperate fight against a seemingly invincible creature, after all her testosteron-soaked male macho peers have failed and died.

Death Machine also nicely implements many moments of corporate satire that are never subtle, but then what is subtle about the often chaotic and ego-driven inner workings of a corporation? The film’s visuals perfectly transport the often exaggerated sterility and inherent gloominess of a corporate office. Watching the executive board meeting will make you crave for these thugs to be disposed of in a most bloody manner. And Dante, despite being a total psychopath, is actually a rebel within the corporate system, and jokes about his well-deserved climb up the corporate ladder every time he or his monster kill off one of his superiors. 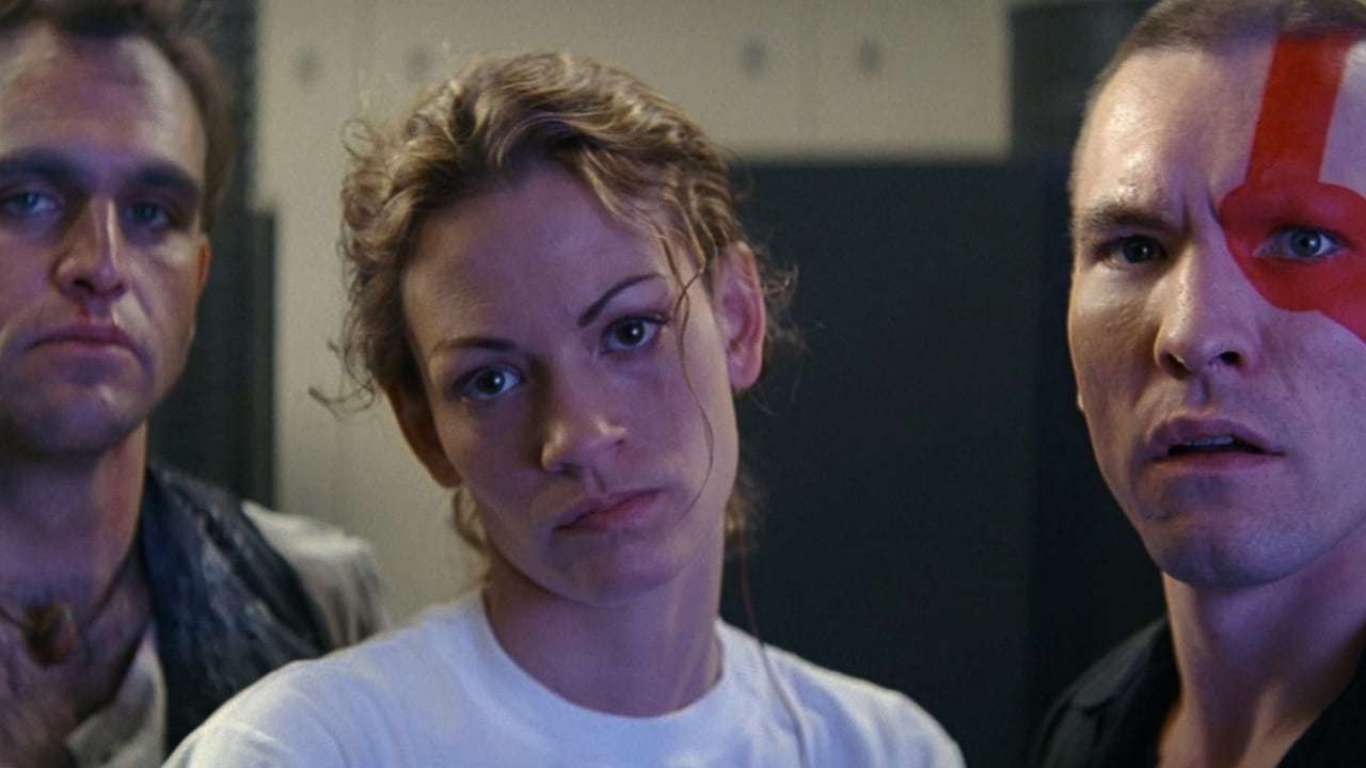 All the actors contribute their share to the cheerful hysteria, and speak their dialogues as if every sentence in the script ended with three exclamation marks. From all the characters, Brad Dourif stands out the most, in what is his easily his most entertaining role as a human (second-best if we include killer dolls). His Dante is a manic maniac with an outfit and hairstyle that would have made Kurt Cobain proud, who simultaneously watches cartoons and porn in his lair while playing with action figures, who wouldn’t want to live like this! The nerd happiness stops when he turns out to be a psycho killer with a very unhealthy crush on Hayden.

Apart from Dourif, the real star of the film is the monster, of course! Norrington worked as special effects creator for a bunch of popular genre movies in the 1980s and early 1990s, such as Aliens and Gremlins, and this expertise served him well to conceive a superb design for his “frontline morale destroyer”. Imbued with grotesquely oversized claws and jaws, it’s a thoroughly uncanny and absurd creation. The robot killcam is an LSD-infused nod to Sam Raimi’s Evil Dead attack cam, and the visual extravaganza is complemented by total terror on the audio track whenever the metal monster shows up. A clanging cacophony of whirring, beeping and grinding is guaranteed to drive you nuts.

And it’s not only the monster that looks awesome, the quality of the whole film is of a level that makes it hard to believe that this is a debut movie. Norrington spent every penny he had available very well, and delivered a stunningly coherent production with top notch set design, cinematography and editing. He also endowed the film with a big portion of cheese, awesome one-liners are forced into every scene without remorse. And just like in Sam Raimi’s Evil Dead classics, horror and comedy form a perfect symbiosis glued together by total hysteria.

Dante’s creation gets to do its fair share of bloody killing, even though we’re more than halfway into the film before all brakes come completely loose. Norrington stages the odyssey of Hayden and her unlikely allies through the building with suspense and plenty of jumpscares. The big finale is an action-packed stroboscopic nightmare, when the killbot sets out to shred the remaining humans, one of them who has volunteered to get transformed into a super soldier for the greater good. One set after another is torn down by explosions and gunfire with an almost blinding and deafening intensity.

Gloomy visuals, hysterical horror action, and cheesy jokes give us a spectacle that surpasses most A-list productions of its time in terms of entertainment value and atmosphere. With Death Machine, Stephen Norrington achieved nothing less than perfection in low-budget film-making. 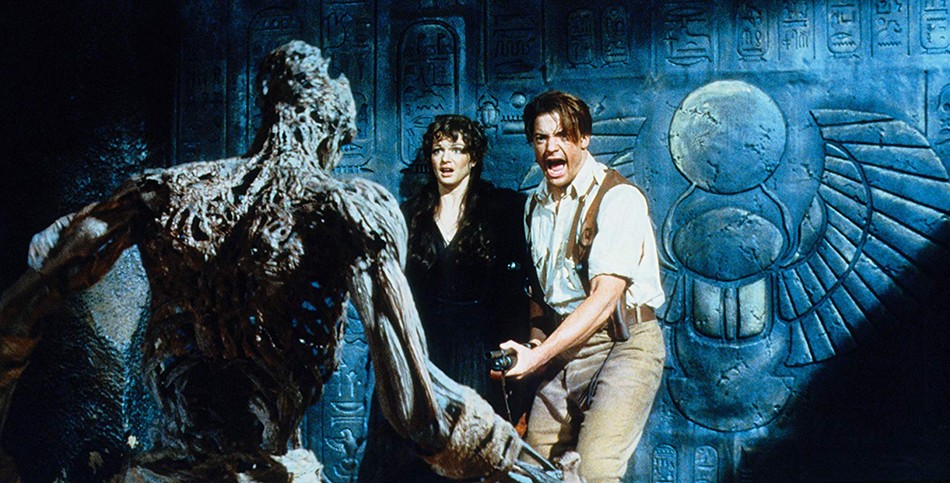