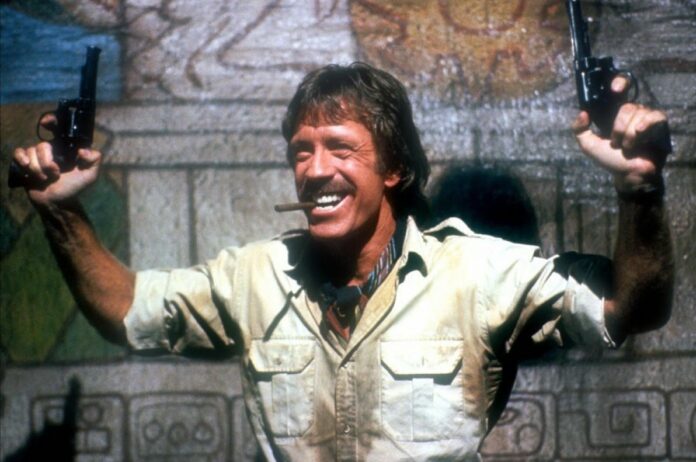 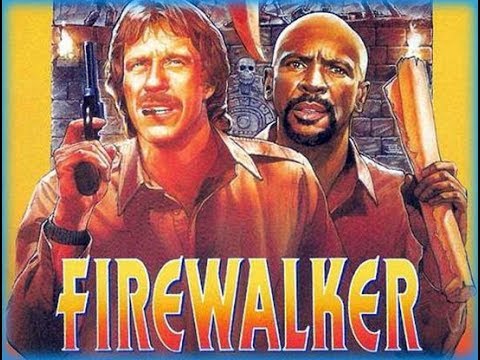 Chuck Norris, Indiana Jones-style adventure, lost treasure, buddy comedy humor, aggressive mystical Indians, an unrelenting communist warlord, what could go wrong? Firewalker has all the elements of a fun Cannon-fueled schlock fest but the would-be, quintessential action B-movie strays into an entertainment no man’s land. It lies somewhere between “best of the worst” and legit action/adventure flick.

The typical Cannon craziness and violence are throttled a bit to boost the comedy stylings of Chuck Norris, Louis Gossett, Jr., and Melody Anderson. Despite its shortcomings and attempt to play it safe, Firewalker is worth a viewing for action fans looking for some airborne butt-kicking and lighthearted adventuring down Mexico way.

Action/thriller veteran director J. Lee Thompson does a respectable job integrating comedy into the action sequences. From Chuck Norris’ Max and his inability to shoot straight to Louis Gossett Jr.’s Leo picking a fight with the wrong dude, the yuks and the kicks blend seamlessly. The characters’ precarious situations involving narco-gangs and dune buggying mercenaries are punctuated with sight gags and occasionally effective one-liners.

The attempts at humor in the dialogue and during the many scenes of downtime are another story. We all love Chuck but I don’t think many would praise his acting skills or range of on-screen emotion. This is his first comedic role and unfortunately he didn’t learn his lesson as we get subjected to Top Dog and Sidekicks later in the 90s. Max is a bold, but not too bright, adventurer who punches and kicks his way through the many obstacles in his path. The humor plays on the character’s brash, devil-may-care attitude, which leads his partners from one calamity to another. He’s supposed to be like a Jack Burton and an Ash Williams rolled into one, but it doesn’t quite work and Chuck isn’t quite able to pull it off.

He still shines in the straight-up action scenes, particularly when he takes on an entire bar during a busy Friday night. He just rips right through them with a series of choke holds, roundhouse kicks, a rare roundhouse punch, and a flurry of additional punches that send patrons flying through every available window and door. Max even has time to take a quick breather and a beer between waves of thugs. It’s understandable; all those high-flying kicks delivered with optimal precision take a lot out of you.

A Cannon-esque “Story” with a Strong Supporting Cast

The plot and narrative elements are silly and forgettable but, like other works in the Cannon filmography, there is at least one fascinating theme to keep your interest. Melody Anderson’s Patricia, who seems to be struggling with a cognitive disorder for half of the movie, approaches Max and Leo with an offer to assist in finding hidden Aztec or Apache gold (it changes from scene to scene) and the three of them can split the profits “50/50.” It’s amazing that she seems to recover from her mental condition by the third act when she becomes the love interest/damsel-in-distress.

Standing in the way of their windfall is El Coyote, played wonderfully by Predator’s Sonny Landham, who definitely needed more screen time. He’s not interested in the loot, though. He wants to acquire the unlimited powers of the ancient priest, the Firewalker, which he can summon by plunging a mystical dagger into Patricia while wearing a colorful, feathery ensemble.

Helping Max, Leo, and Patricia along the way are Tall Eagle (Will Sampson, “Chief” from One Flew Over the Cuckoo’s Nest) and Corky played by John Rhys-Davies, who hilariously tries to do a Southern accent. These are two strong performances that attempt to build a world around the events and characters in Firewalker. Tall Eagle reveals the Firewalker legend and El Coyote’s designs. He also combats El Coyote’s attempts to assassinate Max by proxy, using remote mind control powers. The Native American mysticism is an interesting thread and gives the movie some depth. We could have used more of this to ramp up the fantasy and even some horror elements.

Corky, the drunken Marine veteran expat, leads a band of mercenaries from his jungle basecamp in hopes of one day taking control of the country? I don’t know, but he has lots of booze to share and he knew Max from back in the day, so he’s good for some back story. He’s set up as a tragic, wayward figure that serves as a warning for Max’s possible future if he continues his directionless life. Again, this is another attempt at depth and character development but ultimately it has no bearing on the narrative. Great performance and an interesting character but ultimately, quirky Corky serves little purpose.

Editing, pacing, and focus hold Firewalker back from being as Ultimate as it could be. It’s two hours long(!) and it feels its length with several scenes that involve talking in the hotel, talking around the campfire, and figuring out to escape capture that involves more talking. Some of it is OK and Louis Gossett, Jr. and Chuck Norris are allowed to develop some chemistry, but Melody Anderson seems like a rusty third wheel that serves little purpose and intermittently slows things down. Added characters like Corky and plot lines like Patricia’s psychic powers, go nowhere or don’t pay off in any meaningful way. Basically 20 – 30 minutes of this movie wouldn’t be missed.

Homing in on the action, physical comedy, and mysticism would have elevated Firewalker to cult status. The audience for an action-driven, Indiana Jones parody assuredly exists. J. Lee Thompson knew this at the time, which is why he made King Solomon’s Mines a year earlier. Trying to do too much with way too little, in terms of budget, acting range, and story, led to a mediocre reception and a mostly forgotten legacy that wound up at your local thrift store’s VHS rack.

Despite its flaws, Firewalker is still a delightful romp through sets that look like they were later used in Legends of the Hidden Temple. With just enough action, laughs, and groan-inducing dialogue, this buried treasure is worth digging up and adding to your Cannon collection. Amazon Prime Video also recently released it to their streaming service, so add it to your queue. Firewalker is also one of the rare Golan-Globus productions that’s relatively family friendly. Share your love of 80s and 90s action with your kids. Get them hooked early and prepare them for more advanced material…like Ninja III: The Domination.