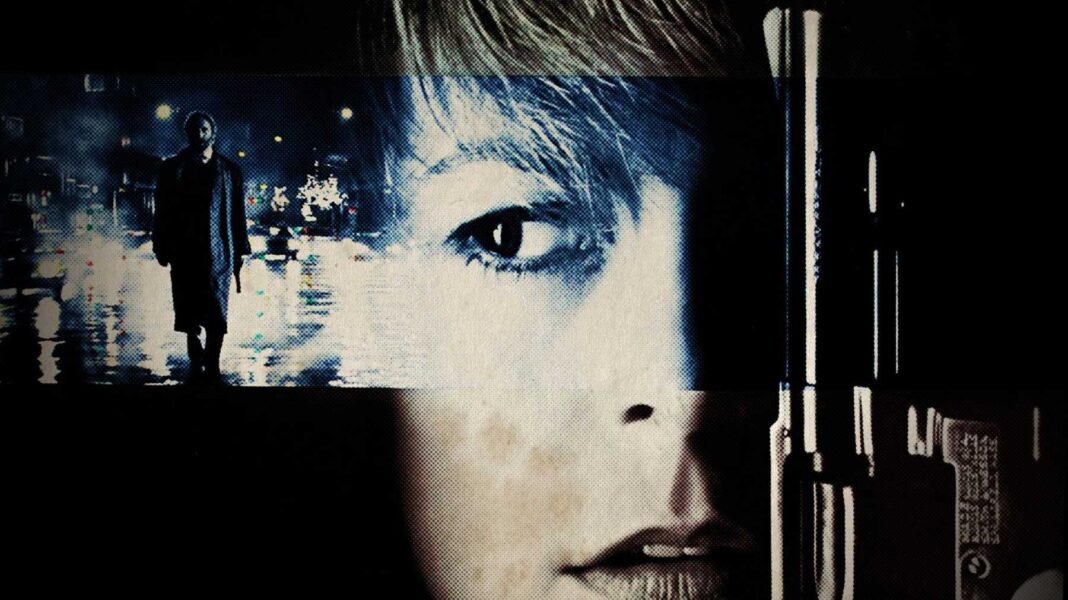 Kathryn Bigelow and Jamie Lee Curtis team up to create one of the most enthralling action thrillers of the 90s – and why you should revisit it today. 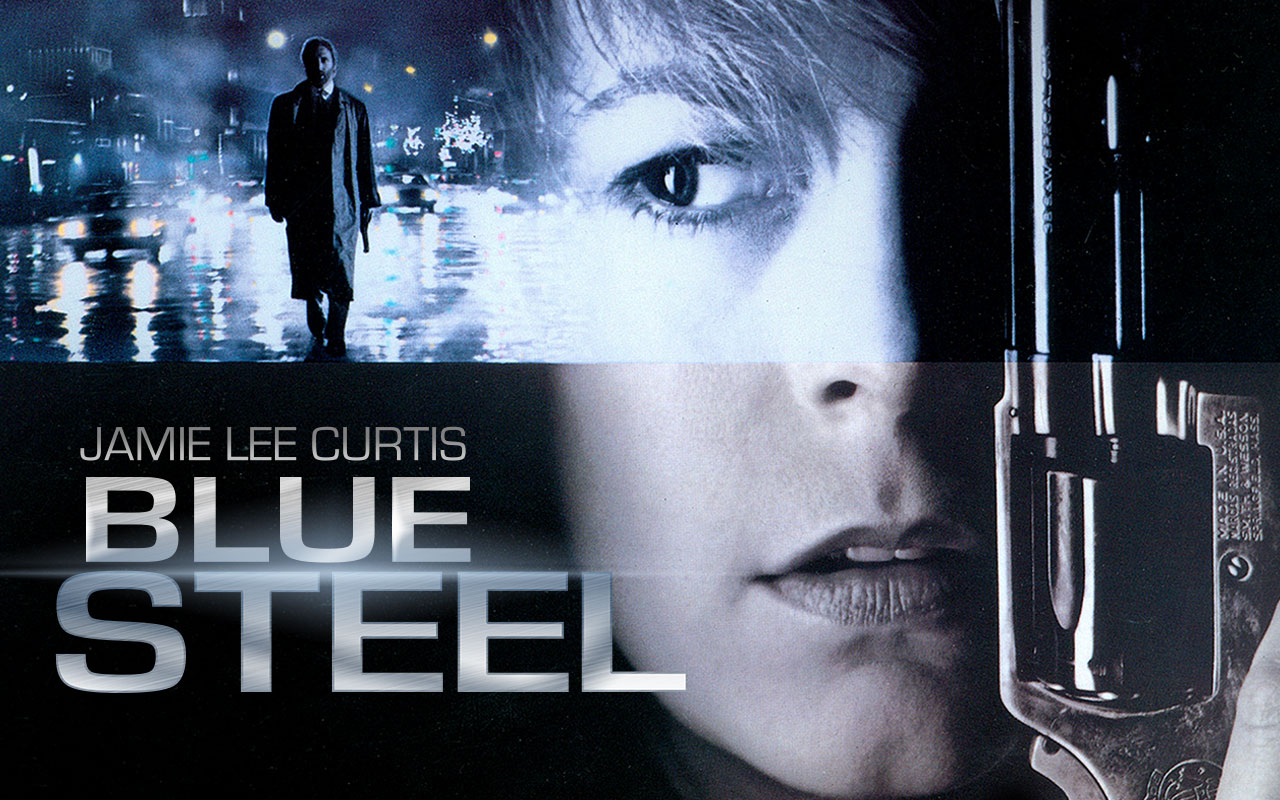 I’m not going to make one joke about Zoolander and his “Blue Steel” look. Not even one joke. And it’s not because it’s kind of a funny coincidental connection between the Zoolander shtick and Kathryn Bigelow’s serious minded 1990s action thriller, but more so just because I can’t think of one. Not a single joke. If anything the only thoughts that crossed my mind watching Blue Steel for the first time here thirty years after it first came out, and having seen Zoolander 30+ times mostly during one summer while I was in Junior High, is that somehow I felt like Ben Stiller was perhaps trying to mirror Jamie Lee Curtis with his pointed face caricature in Zoolander… but that’s not really a joke. And I wouldn’t know how to prove that either.

This review is going awfully so far… Anyway, Blue Steel was a great discovery for me personally. I love Point Break. It’s probably my favorite movie of all time. And not just action movie. Or Keanu Reeves movie. Or Patrick Swayze movie. It’s my favorite MOVIE movie of all time. I’ve seen it 1,000 times and I could literally put it on right now and enjoy the hell out of it.

That being said, it never quite occurred to me to make a dive into Bigelow’s filmography enough to try out some of her other classics. So, when I did finally stumble upon Blue Steel, a title that caught my eye both for its Zoolander name, plus a really badass VHS cover, I quickly decided this was probably a movie almost perfectly made – but expertly hidden for years – movie for me.

And… I gotta say… This movie is awesome! It’s got everything you’d want in a classic actioner – plus then some! And by then some, I mean if you also like slasher and horror films, then Blue Steel has tons of those goodies too. Overall though, it’s just super interesting to watch Bigelow hone her craft. Her filmmaking, along with Jamie Lee Curtis’ lead role, are a potent combination that probably could pull off any number of great action and horror films from the 90s until today.

So, now currency watching movies in throngs of this COVID lockdown era and the clamor for social reforms – many of which revolved around policing and the use of armed force, Blue Steel is a fascinating study. Curtis portrays Megan Turner, a NYPD patrol officer who has just joined the force. In an early episode, she’s forced to pull her firearm to take down a convenience store hold up (with a great cameo by Tom Sizemore). This encounter will shape the narrative for the rest of the film – but not necessarily for any ways you might expect. I certainly didn’t.

Sure, we get Curtis called into the chief’s office and the run of “you’re a loose cannon” speeches, as well as the interesting angle of how this plays with her being a female cop in a classically chauvinistic male-dominated police force, but the crux of the movie develops from her gun (a .44 Magnum) which she accidentally leaves behind and is taken by a bystander who develops an odd fixation with the weapon. Which leads into…

In what appears to be a passing role, or maybe even a joke along the way to her journey to be a badass cop hero, this bystander – a white collar commodities trader (Ron Silver in an absolutely terrifying role) – becomes the main antagonist of the film as he stalks, courts and obsesses over Curtis and her gun. Believe me, it’s weird. But to his credit Silver plays the creep to perfection, which provides the perfect forum for Curtis to step up and shine.

So, instead of a standard tough cop taking down a drug lord or fighting off terrorists, we actually get this odd psychological horror / slasher film as Silver goes on a serial killing spree while developing his insane stalker-obsession with Curtis. Who, unknowingly at the time to her credit, ALSO develops a romantic relationship with Silver that culminates in some very insane scenes in the bedroom – of course. 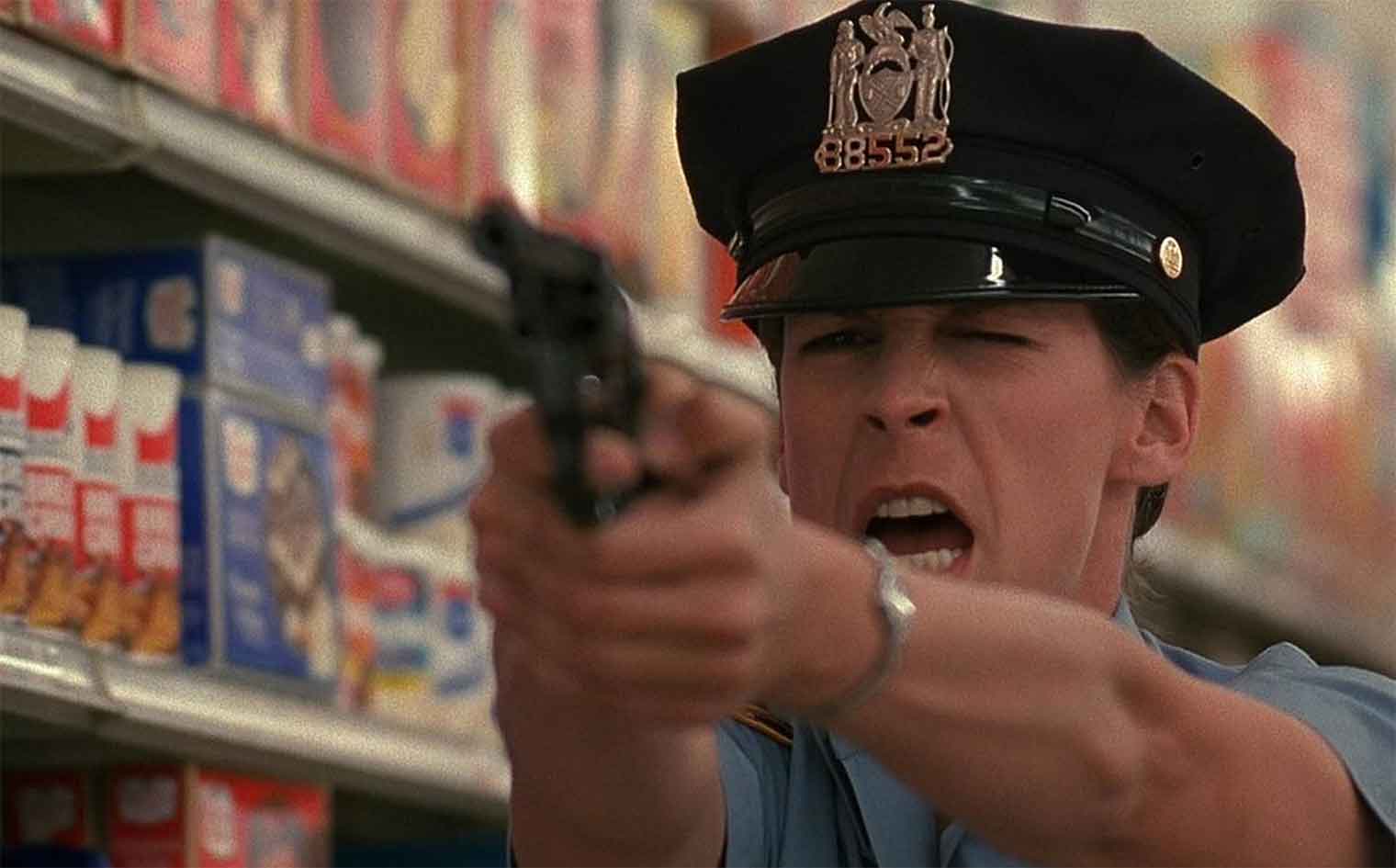 This movie is great, but sadly it didn’t do very well when it came out and was largely considered a box office dud. Even with positive reviews and Roger Ebert calling it “sophisticated update of Halloween” which could have ended up as just an iconic franchise based on Curtis’ performance, it’s not that well known. The only reason for this that I can guess is that it’s a movie that doesn’t quite fit into an exact genre box. It starts so much like a generic actioner that pits Curtis as the female equivalent to Stallone in Cobra perhaps, but then falls so much deeper than Cobra would ever dare into the psychological horror that a bad guy can actually perpetrate.

The action scenes are top notch though. I really believe that Bigelow has a mastery of action and the shootouts alone in the beginning are worth the watch. Also, I’m not a huge stalker expert but the whole psychotic killer writing your name on bullet shells story works precisely with twists and turns at every turn. Overall, if you’ve seen Zoolander but not Blue Steel, you’re missing out on the absolute banger that much more deserves the space in popular culture.