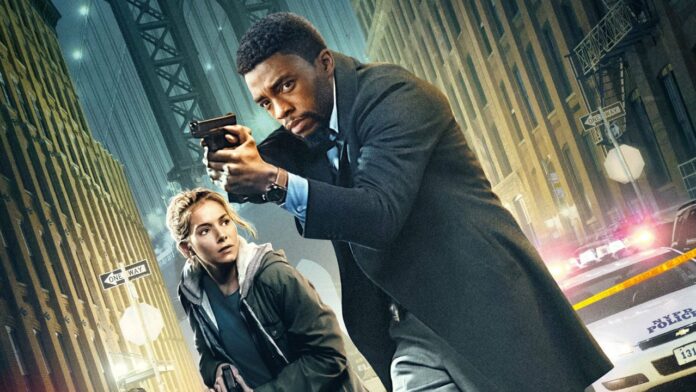 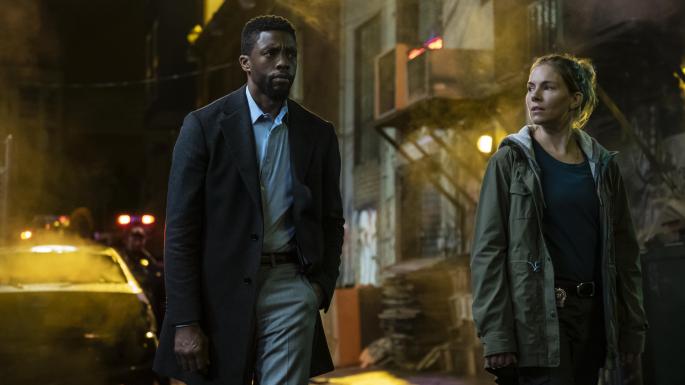 As we’ve seen from the numerous commercials and trailer, 21 Bridges tells the story of a dedicated cop, relentless in his pursuit of justice caused by the trauma of losing his Policeman father when he was young, who has been tasked with chasing down two gunman responsible for killing a handful of boys in blue during a heist gone bad.

The advertising didn’t show us anything we haven’t seen, or come to expect, from a police thriller – gritty settings, tough guys with guns, lotsa action –  but what it doesn’t show is the absolute dedication and stone cold seriousness that director Brian Kirk and leading man/producer Chadwick Boseman have taken with the material.

Yes, 21 Bridges could be called just another generic cop chase movie, but what sets it apart is the bleak tone, ominous score and real world set up. After a year of superhero blockbusters and lacklustre sequels that frankly left me cold, this familiar, but highly entertaining action film was a welcome return to good filmmaking and I left the theatre very entertained.

The pic is far from perfect and won’t likely win any Oscars come awards time, but it’s certainly a welcome return to the brutal thriller genre made famous in the mid 90’s. What worked…?

Boseman. I was underwhelmed with Black Panther as I seem to be becoming indifferent to that genre, but Boseman was quite good in the lead, it was the surrounding movie that let him down.  In this movie, he’s free of the restrictions in place that come with making a kids movie, and he lets fire with all cylinders as the embittered cop who lets nothing, and no one, stand in his way.

His lead, Andre Davis, is quite the badass. When we meet him, he’s in an Internal Affairs review board meeting, being questioned about how he feels having gunned down a cop killer. Davis likens his job to a soldiers’ in a war. Of course, the bureaucrats in suits don’t get it, but we do – Davis views the city as a warzone – and he’s the last gunslinger there to clean it up. Boseman pulls off the role quite admirably. Where most young actors try and look tough in these roles and struggle, he actually pulls it off, with his no bullshit attitude and zero f’s to give demeanor.  I look forward to seeing him in more adult-oriented roles.

The villains. Stephan James and Taylor Kitsch aren’t just paper thin cutouts waiting to be gunned down. Thanks to their chemistry, we actually almost care about their plight, even though they’re bad guys who gun down innocent people. James is very solid as the conflicted one of the two, but Kitsch is fantastic and is cornering the market on playing these unhinged scumballs after his performance in this and the underrated American Assassin. They’re two of the most memorable pseudo villains/anti-heroes to come along in ages.

Keith David makes a brief appearance as Boseman’s boss.  What else can you say? The guy is a freakin’ legend and any scene he’s in is automatically better because he’s in it! Still scary and imposing as hell, David has lost none of his touch, even in smaller roles.

JK Simmons turns up as the Captain who wants blood for the death of his men. Like David, this guy knows how to deliver a line, and he can deliver a performance with just one look. He’s that good and he gets some great insults in on the Mayor who’s been neglecting his beloved department. My only gripe with role is that I wish the script hadn’t telegraphed his true intentions so much. Keeping him more of a mystery would have been better. 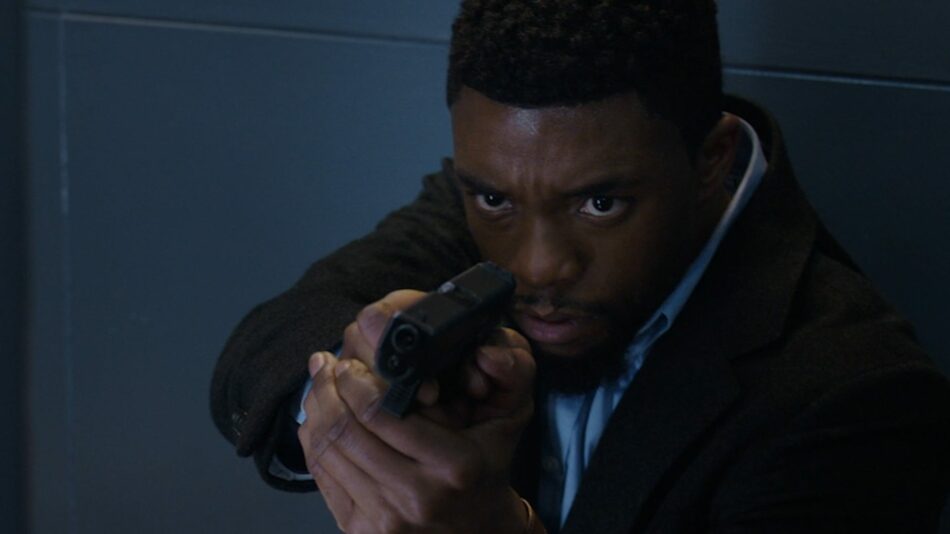 Director Brian Kirk is a filmmaker whose past efforts I’m not familiar with, having never watched Game of Thrones or Boardwalk Empire, but he, along with cinematographer Paul Cameron,  captures the rapidly moving action and story very well and avoids the pratfalls most TV directors make first time around. He shoots Bridges like a real film, not a commercial, and some of his action sequences are so well captured and edited that they beg for a second viewing. Well done.

The score by Henry Jackman and Alex Belcher isn’t some dull synth score that just fills in the silence between action beats – it’s almost another character in the film, and like the film, it’s always moving and thumping, and we as the audience are always trying to keep up. If you’re a soundtrack enthusiast, you probably should track this one down.

I can’t write this review without mentioning the action. Anyone who likes R-rated action movies will love this film. The carnage is not in the John Wick mould, but it is brutal and very final. While it’s become the in-thing to riddle people with bullets in movies of late, Bridges goes for the realistic approach and it fits the picture given we’re talking about professional cops who are trained to deliver kill shots. It’s bloody, looks painful and sounds horrible. What more could you ask for?

Will it be an ultimate classic though?

Sienna Miller. She plays a local narc partnered up with Davis to help him navigate the terrain. She really failed to be believable in this film. Maybe she’s too pretty. Maybe her fake New Yawk accent bothered me, but I didn’t buy her character, and like Simmons, it was all too obvious what was going to happen. It’s probably the only major problem I have with the film.

The screenplay mostly works and keeps things moving at a pace, but a late subplot involving dirty cops and a conspiracy seems rushed and not terribly well thought out, but having said that, the film does conclude almost open-ended on this development, and it’s better for it. We’re left to wonder what our hero will do given the tough choices he’s left to make, and the uncertain future he’s facing. The screenplay was rewritten by Matthew Michael Carnahan, brother of Joe – who helmed the sublime 2002 procedural Narc – and the closing echoes that film’s tough finale. One can’t help but wonder if it was his doing.

Overall, no rule books are being rewritten, no new gold-standard has been set, and the film likely be a blip at the box office this weekend, but 21 Bridges is a very well made, well acted crime/cop movie that is more comparable to the films of yesteryear than the soulless pulp we’re getting at the moment. I was refreshed by its skill and execution, and will be returning soon to see it again.

From a small country town where not many films played, Kent Church grew up on a steady diet of Coca Cola, horror magazines and action movies on VHS. If the movie didn’t have Chuck Norris or Eastwood on the cover, he wasn’t interested. His one core belief: Arnold Schwarzenneger must be President!! And James Woods Vice–President…