Scott Adkins would have killed in the 80s and 90s! 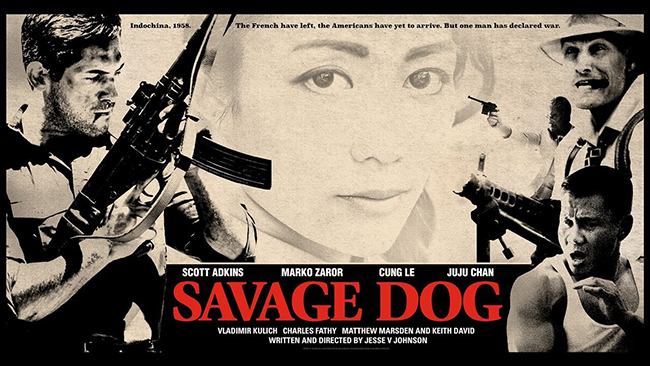 I miss Cannon movies. No other company epitomized 80s action movie cliches better than they did. Shootouts, explosions, ninjas, you name it. They gave us the goods in spades. One of those goods was bonafide action star Michael Dudikoff. The star of such action classics as American Ninja 1&2 and Avenging Force, just to name a few, Dudikoff represented a new breed of action hero who was primed to take over the action world. But unfortunately, it wasn’t meant to be, as Cannon went bankrupt, and Dudikoff’s career took a downturn after that, becoming relegated to the DTV market (Although he continued to make great action flicks there as well).

Now, in this day and age of genuine articles and great pretenders, we await the arrival of a hero & movie to save us. An epic combo package to bring back the heroic nature Dudikoff & Cannon so masterfully gave us. Alas, that combo of hero and movie is here. His name is Scott Adkins. And that movie is Savage Dog.

The Epitome of an Action Star

“In 1959 Indochina, Ex-Prize Fighter & prisoner Martin Tillman must confront the savage beast within as he seeks vengeance against the corrupt powers that be after they take all he holds dear to him…”

Now, ask anybody that knows me, they can tell you how much I looooove Scott Adkins movies. He’s just the epitome of an action star. Quite frankly, if you ask me, the guy is the most complete action star in the world (Ha). And this one is another one in a long line of action movies that proves just that.

But in my opinion, it does more than that. So much more. It quite beautifully brings back that amazing feeling you got when you watched a Cannon/Dudikoff movie. Truthfully speaking, I’ll go as far as to say this is the greatest Cannon/Dudikoff movie Cannon/Dudikoff never made. Scott Adkins as Tillman perfectly invokes the spirit of Dudikoff during the proceedings. That steely eyed look. That super cool demeanor. It’s all there. Adkins is the second coming of Dudikoff here.

Supporting him are the iconic Keith David as Valentine, the man who takes in Tillman to be the cooler at his bar and becomes a father figure to him. He’s also the narrator of the movie, and hearing that awesome voice overlay the proceedings was pure magic. You’re a legend, Mr. David. Rounding out the cast is Vladimir Kulich as Steiner, the diabolical head bad guy, badass MMA fighter Cung Le as the cold hearted soldier Boon, the lovely JuJu Chan as Isabelle, Martin’s love Interest, and the spectacular Marko Zaror as Steiner’s main henchman Rastignac, or as he likes to call himself… The Executioner.

And everyone & thing are brought to life exceptionally by the great action auteur himself, Jesse V. Johnson, who perfectly captures the look and feel of a Cannon movie. Although the fight scenes are a bit faster and more “intricate”, if you will, (more on that in a second) than the usual Cannon movie, the action sequences on a whole are pure Cannon goodness.

Now, to put it in perspective, making an action packed period piece on a low budget is no small task, but Johnson executes it all amazingly. But because it’s a period piece, we don’t get the awesome gymkata style of fighting we usually get from Adkins. You can tell he had to tone it down a bit in this one. But that’s not at all a bad thing. Because in this one, even though it’s a more grounded style of fighting, it’s more hardcore. I’m talking bare knuckle, “Hard Times” style of fighting, but with the occasional beautiful kick here and there. And it is awesome! Just brutal, hardcore beatdowns.

But it’s not just fighting in here either. Oh no. We get some awesome, glorious shootouts as well. Glorious by way of Commando and Missing in Action 3. Just Adkins running around killing countless bad guys one man army style. Just beautiful stuff. Beautiful and bloody. And when I say bloody, I mean BLOODY. 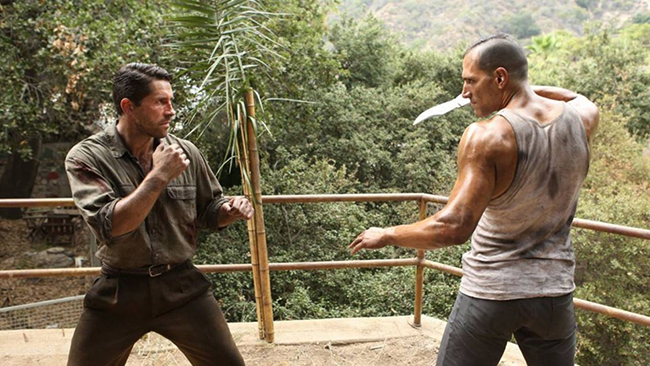 Now, here’s a fair warning for the faint of heart. This is one violent movie. VEERRRY violent. I’m talking geysers of blood, severed limbs, decapitations, exploding heads, and quite possibly one of the most brutal and disgusting disposals of the final bad guy in action movie history. I’m dead serious. Top 3 bad guy disposals. Up there with Richter’s death in Total Recall and Night Slasher’s in Cobra. I’ve seen this movie quite a few times already, and yet every time that part comes up, I’m wincing at the screen like “Ahh… Grody.”

Savage Dog. An awesome revival of Cannon style badassness. But, if that wasn’t enough to paint a picture for you, allow me to use broader strokes. When you watch this (It’s currently streaming now on Netflix) just picture:

You can’t unsee it now, can you?


What do you think about Savage Dog? Let us know your thoughts in the comments below!