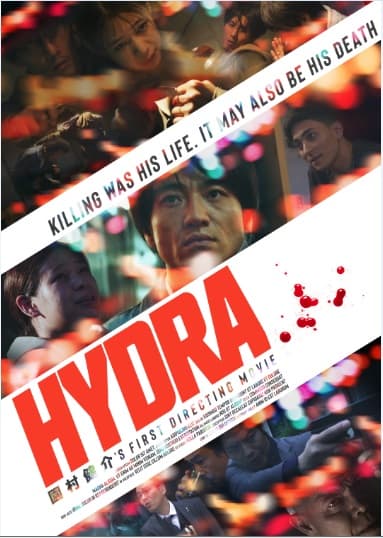 An action lover’s quest to find great new action movies may come off like a game of roulette most of the time. Sometimes, you hit big and get a new action classic on your hands, but a lot of the time you end up with a big old dud. It is what it is, though.

I know not every action movie is gonna be the next Commando or Die Hard or even John Wick: Chapter 3. But sometimes, great action may land right in your lap when you least expect it. And that’s exactly what happened to me when I was given the chance to view a new action movie from Japan called Hydra.

An assassin for a secret organization keeping Japan safe from underworld threats finds himself targeted by evil forces aiming to unleash an unstoppable criminal syndicate upon Japan.

Before I get started, I want to give a big, special thanks to Lee B. Golden over at Film Combat Syndicate for presenting me with the opportunity to watch this. When he contacted me, I had never heard of this movie, so I had no idea what to expect. But, he said he knew I would enjoy it. I guess what I’m trying to say is… Mr. Golden is psychic, because enjoy this one I did!

This was such a splendid piece of asian action cinema! Quirky and abstract, as well as dark and brutal, with a final fight that will definitely become an all timer in the years to come, Hydra left me with a genuine feeling of action satisfaction once the credits started rolling.

The reason for the success of this is totally due to the characters, especially the central one. Lead actor Masanori Mimoto, who plays the main character Takashi, interjects him with such a wonderful blending of awkward and dangerous to give us an incredibly soulful and charismatic performance.

Takashi struggles with a past life he know longer wants to be a part of, and just wants to disappear into a banal life. But is confronted with the dark forces of that past life and is forced to face it head on. Truly a remarkable performance.

The world that he inhabits is also completely immersive. Director Kensuke Sonomura (Re:Born) brings this fascinating world to delightfully morbid life. Half filled with sunny people, the other half with shadowy characters, all of it off-beat and unorthodox, this universe definitely gives the one in the John Wick series a run for its money. And I’m hoping we get to visit it again.

There are 2 extended fight scenes where I was just completely wowed. Just pure wide eyed stunned silence as I watched. I was in complete awe. The very best in hand to hand combat. When I said the final fight scene is destined to become an all timer, I promise you I was not being hyperbolic. I genuinely think it’s that great.

It absolutely takes its place among great fight scenes such as Donnie Yen vs Wu Jing in SPL, Jackie Chan vs Benny “The Jet” Urquidez in Wheels on Meals, even Bruce Lee vs Chuck Norris in Way of the Dragon. I want to endlessly go on and on about how great this fight is but there are just not enough words in the english language to help me convey just how amazing it truly is.

A Short, Sweet (and Ultimate) Actioner

Were there any issues? Sure. The aforementioned world these characters inhabit is unfortunately massively underexplored. It’s so fascinating, you want to see more, but the movie’s very brisk 77 min running time doesn’t really leave much for exploration. Maybe they’re saving that for the sequel? Who knows? But I’d love to see more.

Also, the movie isn’t packed to the gills with action, either. Although the movie is filled with tension and dread, those two fight scenes I mentioned earlier are primarily the two biggest sequences of note in the movie. I mean I didn’t have a problem with it, because I understood what the filmmakers were trying to accomplish, but I can see others having issues with that. It’s ok though, the movie is ONLY 77 minutes, so you won’t have to wait long. And trust me, those scenes are worth the wait.

But all in all, I thoroughly enjoyed this. This was definitely something I’d want to not only see again, but something I’d love to see more of in the future. Hopefully, we get a full fledged franchise out of this. I mean I hope so, because I’m already ready for Hydra 2, 3, 4, 5, 6, The spinoff, the tv series, the comic book tie-in…