Chuck Norris vs the Phantom of the Opera.

Today let’s take a look at one of the most complete, and perhaps one of the best, films from Chuck Norris’s time at Cannon Films with the grandeur-ly titled The Hero and the Terror.

In it Chuck Norris plays THE HERO, and it’s great because characters call him as such thanks to his part in taking down THE TERROR aka Simon Moon (portrayed by the man-giant Jack O’Halloran) in events which happened before the film takes place (but yet Chuck is still haunted by throughout).

To many, it’s actually an interesting action flick because it crosses over into suspense and perhaps even horror genres. But it’s also great because it’s Chuck Norris beating the crap out of a theater-dwelling Frankenstein phantom.

Chuck Norris as The Hero

Sandwiched in the middle of Chuck’s great run with Cannon Films (and released the same year as Braddock: Missing in Action III), you could say that Norris was at the top of his game. The film develops in a pretty boilerplate fashion for the most part presenting Chuck as a sleepless cop/detective who wakes up (shirtless of course) in cold sweats haunted by his previous showdown with THE TERROR.

This is in stark contrast to his role in Invasion USA when Chuck Norris sleeps like a baby whereas the bad guy, Mikhail Rostov, is the one who wakes up in a panic imagining Chuck Norris coming to kill him eventually.

And when you’re an ultimate action movie star and wake up in terror what do you do? Well of course you go meet up with your cop buddy Steve James for a heavy powerlifting workout montage! 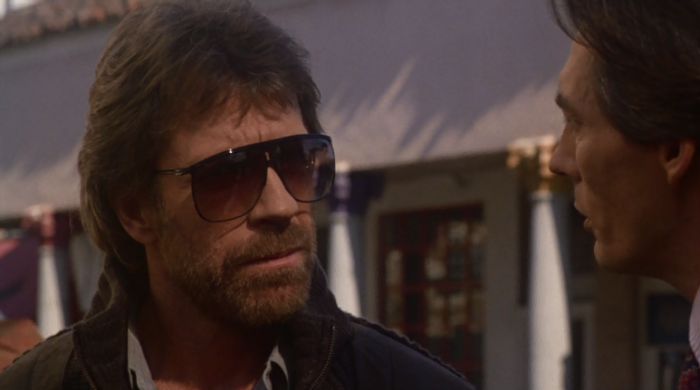 While not quite marketed or presented as a split bill feature by any means (Steve James’ name only appears on the back of the VHS which I watched), James is a great extra character in the film and would have truly loved to see him split screen time with Chuck if things had worked out different.

James provides some great humor to the film and really excels at making Chuck Norris seem to loosen up in their scenes together. Billy Drago also has a rare non-bad guy role as well as the shrink who worked with THE TERROR before he broke out.

It’s odd because you almost feel like Drago, with his perfect slimy hair and gaunt face, somehow made the guy crazier – now that would have been a twist! 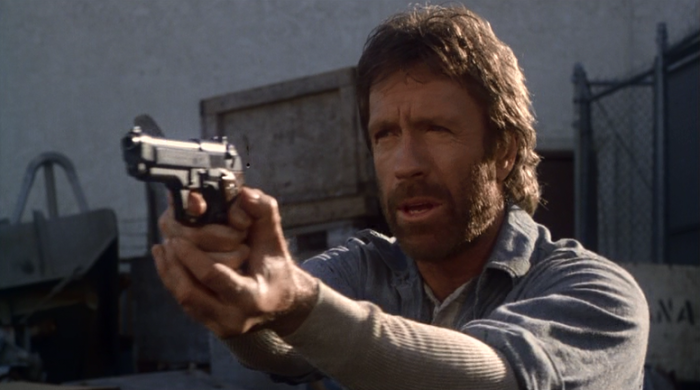 The other interesting element about the film is the love story between Chuck and Brynn Thayer as Kay. It’s a little bit more creative in the sense that they’re actually negotiating a unique relationship where Kay (who it is revealed later was Chuck’s therapist who helped him with his initial nightmares after defeating THE TERROR) is Chuck’s pregnant girlfriend. So a bit of the movie is about this relationship and how Chuck needs to finally overcome his fears and man up, so to speak.

However, to be fair, Chuck kind of Chuck’s this up royally at times, including one scene where he tells his pregnant girlfriend ON HER BIRTHDAY that she looks fat, then orders her an entire birthday cake… C’mon Chuck!

He also (either unwittingly or on purpose) takes her to the theater where he knows THE TERROR is hiding and targeting women. He then finally appropriately freaks out when she almost walks into THE TERROR’s den and is like, hey maybe we should get you out of here.

THE TERROR and the Climax

Overall I’d say the movie works quite well all things considered. I’m aware that The Hero and the Terror is not critical darling (and I believe has a 0% rating on Rotten Tomatoes), but I quite enjoyed it. From an Ultimate Action Movie Club perspective though it might be a bit low on action though.

Save for the flashbacks to the original fight, plus one great sequence that serves just to showcase some contract-appointed roundhouses by Chuck in the middle, it’s really more of a relationship story and suspense thriller. There are several sequences of Chuck exploring the old movie theater where nothing actually happens… Spoilers!

But, if you like your Chuck this is pretty much mandatory viewing and great for UAMC events and watching with friends.