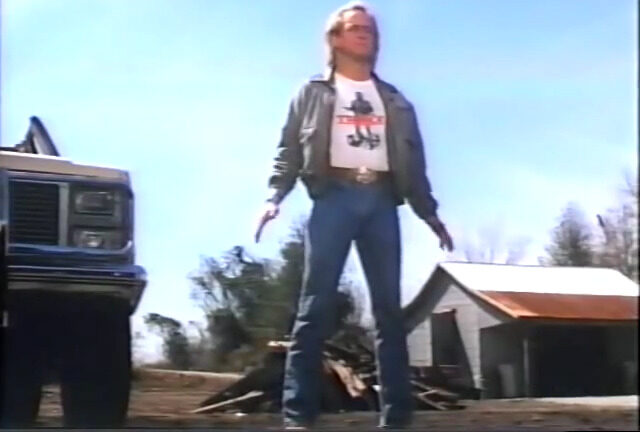 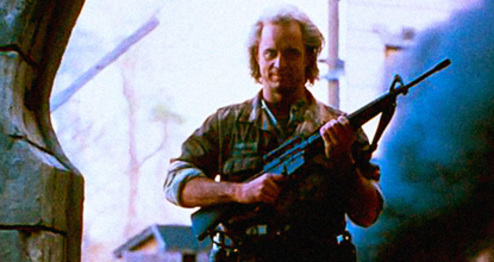 Generally speaking, I feel like with most movies – and action specifically – by about 30 minutes in I have a pretty good idea how the movie is going to go. We met the good guy, we meet the bad guy, we meet the girl and we see the obstacles that are going to be put in place before everything can come together in the end.

However, I recently watched Traxx for the first time and I gotta say… Shadoe Stevens you simply outdid yourself with this one! Also, I have to say, wtf dude?? I don’t think I’ve seen a movie more awesome, funny, confusing and frustrating since Hudson Hawk. But this was somehow much better and worse at the same time.

So, for those who have seen Traxx, or those who still need to, let’s take a look at this odd, yet ultimate action concoction that sees Mr. Stevens shines as the self-inhabiting action star who drives this movie so gloriously off of one ultimate cliff after another.

Before we get too lost in the insane world of Traxx, we have to talk about Mr. Traxx himself, Shadoe Stevens. I went in to the film knowing nothing about the movie or him, which I generally prefer. But in this case, I wish I knew a little bit about Shadoe first. As far as the action star look, ability and persona goes – he has it. But it’s how he really presents himself that is wholly unique.

From the best of my ability to research, Mr. Stevens was a popular 80s radio DJ who parlayed his charisma and creativity into a self-launched attempt to become an action star. Also, according to his probably self-written bios he was a marketing wizard responsible for some hugely popular advertising campaigns. In more recent times Stevens has found success both in radio as well as the beloved announcer of The Late Late Show with Craig Ferguson.

With Shadoe Stevens though, we have perhaps the first truly self-aware action star. And not just in the sense that the man knows he’s starring in an action movie, but he / his character is very much THE movie if that makes sense. For example, in one scene Shadoe gets the girl and while making love – as he climaxes – the film climaxes as well with papers magically flying from drawers and a water fountain erupting with him.

Great Action and One Liners 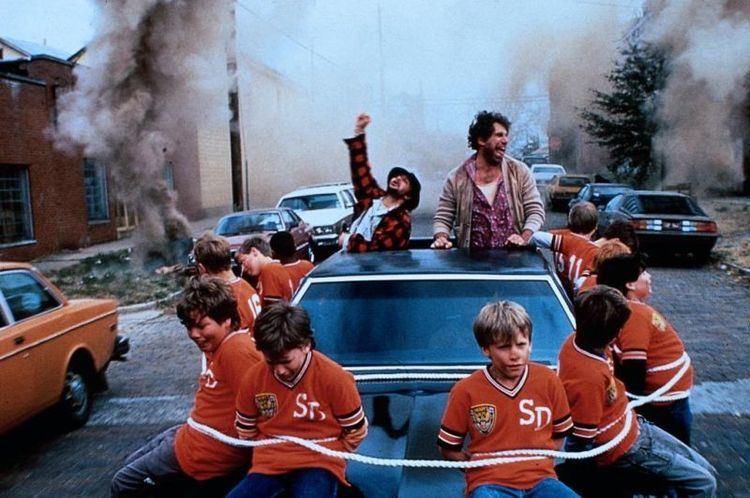 The film overall tries for an unique blend somewhere between comic parody and sincere action which I really commend for the effort. It’d be easy to say it doesn’t work because the awful awkwardness of several scenes, but in many others it’s a great juxtaposition that is truly funny and different. The best example might be one where he’s “cleaning up the town” and warns patrons of a strip club to get out. As they file out one by one he shakes their hands and reminds them that if they come back “he’s gonna kill them.”

There are plenty of other great one-liners and set pieces that are just truly killer action. Stevens looks like a solid mashup of every 80s action star himself with his Mel Gibson hair and Wings Hauser face. He looks cool on a motorcycle or behind a machine gun (as he shoots up a city, presumably, hopefully with blanks?) and clearly contains the ability to crack a joke even if they all don’t land.

We also have great roles from solid character actors like Priscilla Barnes, Willard E. Pugh, John Hancock and Robert Davi (plus a cameo from Wally Amos!?) all with memorable scenes and lines themselves. Yet, at best, it’s uneven in terms of each actor being a bit confused as to what type of movie their characters are supposed to be in.

The Barbarians: Cannon Films’ Beautiful, Awful Wreck of a Masterpiece

The question remains though, is this a good ULTIMATE action movie? By definition, all action movies are ULTIMATE if they’re simply fun to watch with friends on a Friday night, and I’d say without a doubt this certainly fits that bill. However, do be warned that it might certainly cause confusion and even frustration if you’re like me and expect to have ANY idea how the movie might work from scene to scene.

I think, however, what makes the movie truly worth watching and talking about is Mr. Shadoe Stevens himself. I’ve never seen an action star with so much command of the very movie that he’s in. I know it has a different writer and director, but it really feels like Shadoe was pulling the strings behind every single element of this production.

Shadoe is Traxx. Period. So much so that by the film’s climax he’s wearing a Traxx shirt with his likeness as the lead character! I love that so much. There’s even a few moments where his shirt appears to be clearly based on the pose he’s currently striking with his gun in hand. While Leslie Nielsen might pull this off as a gag, with Shadoe (I mean Traxx) it works on such a different – perhaps more ultimate – level.