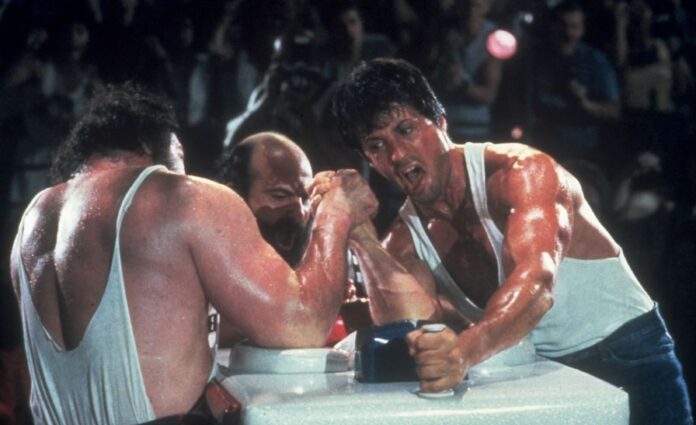 It was the summer of 2000. The school year had just ended and there was a week between the end of 2nd grade and the start of day camp. We only had one television set in the house and my older brother Marcus was in charge of the remote control whenever we weren’t outside playing. At that age, all I wanted to watch were the sports highlight reel shows. What could be better than a touchdown, a home run, or a slam dunk? Marcus, on the other hand, had other plans; he was a movie buff long before I was.

Being denied the chance to see the best plays of the day, I was forced to watch an afternoon special of “Movies for Guys who like Movies.” This was a series on network television in the late 90’s and early 2000’s that focused on action films with great fight scenes, car chases and explosions. I’ll never forget the summer afternoon when Marcus assured me that I’d find the upcoming film entertaining. He said it was a forgotten classic featuring Sylvester Stallone called Over The Top.

At that young age, my knowledge of Sylvester Stallone was limited to his portrayal of Rocky Balboa in the Rocky franchise. I honestly had no idea he acted in anything else. On the age of eight years old, on a summer afternoon Over The Top became one of my favorite films. A movie about semi-trucks and an arm-wrestling tournament was right up my alley. Without further ado, here are the top ten reasons Over The Top is a must see movie for anyone who loves action films.

Sylvester Stallone was one of the biggest movie stars of the 1980’s. His portrayals of the underdog boxer, Rocky Balboa and the Vietnam War veteran, John Rambo, catapulted him to superstar status. However, Stallone isn’t the only A-list actor from the era to appear in Over The Top. Robert Loggia had become one of Hollywood’s elites after important roles in An Officer and a Gentleman and Scarface.

His portrayal of Lincoln Hawk’s rich father-in-law was the latest in a string of box office roles he enjoyed in the 1980’s. Susan Blakely, who played Christina Hawk, had already received a Golden Globe Award for best actress in a television mini-series when she was cast for the film. These were three of the elite performers of their day and one of the reasons this film is worth seeing.

Anyone who’s ever seen the cult-classic Footloose, starring Kevin Bacon, will have the lead song from the soundtrack forever etched in their memory. “Footloose” was performed by Kenny Loggins and is as much a part of the film’s lore as the movie itself. Similarly, Loggins performed a song for the soundtrack to Over The Top that cannot be separated from the viewing experience of the film itself.

In a pivotal scene close to the film’s climax, Loggins delivers the perfect 80’s power ballad titled “Meet Me Halfway.” The song’s placement is perfect because Lincoln Hawk told his son Michael “The world doesn’t meet you halfway” in an important teaching moment earlier in the film. Although this song by Loggins isn’t nearly as famous as “Footloose,” it fits Over The Top just as well as his previous song fit its namesake.

8) Protagonist Trying to Rectify his Mistakes

For reasons known only to him, Lincoln Hawk left his wife when their son was only two years old. Although his wife, Christina, has come to terms with him, not everyone else in the family is so quick to forgive. His son, Michael, initially resents his father after learning that he is alive and wants to be a part of his life. Lincoln’s father-in-law, Jason Cutler, refuses to forgive him and even goes so far as to refer to him as a deserter. Lincoln is a man trying to right the wrongs of his past and turn over a new leaf. This is a story about failure and redemption that everyone can relate to, not just action fans.

Eventually, Michael Hawk begins to warm up to his father and dialogue ensues. Being raised by his well-to-do grandfather, Michael has been attending the best military school available to a twelve-year-old. Lincoln Hawk on the other had is a blue-collar truck driver who doesn’t quite like his son’s know-it-all attitude. When twelve-year-old Michael tells his father that it doesn’t take much intellect to drive a truck, Lincoln responds by making his son get in the driver’s seat.

Initially intimidated by the proposal, Michael leaves the experience with an appreciation for how difficult his father’s job actually is. Everyone has a different set of strengths and weaknesses and intelligence manifests itself in a multitude of ways. Lincoln Hawk teaches his son that degrees and accolades are not the true measure of an individual’s worth. It is a valuable lesson that no one should forget.

When Lincoln Hawk pulls into a diner along the highway to grab a bite to eat with his son, his reputation proceeds him. Confronted by a rival arm wrestler, he is forced to take the challenger to task in front of young Michael. After finishing the job, he is then confronted by Bull Hurley, the reigning arm-wrestling champion and the most respected man in the sport. This is how Michael learns that his father is not just a truck driver, but one of the most respected arm-wrestlers in the country whose got his eyes on the Championship tournament set in Las Vegas. This is a foretelling scene for anyone watching the movie, as it won’t be the last time Lincoln Hawk and Bull Hurley cross paths. 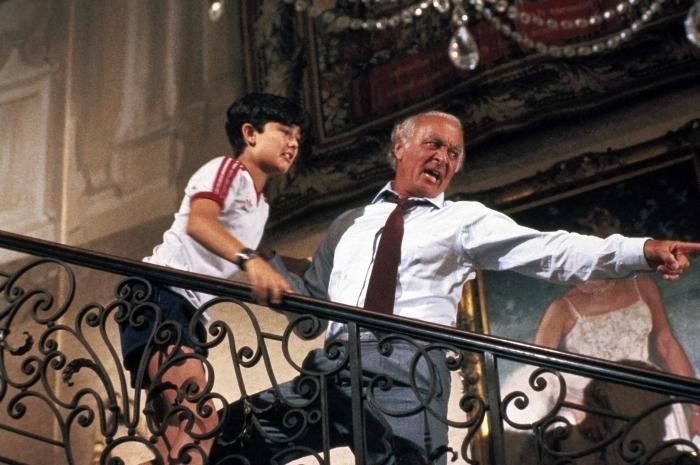 Although he initially balks at his newly discovered father’s involvement in his life, Michael Hawk eventually has a change of heart. However, his grandfather business tycoon Jason Cutler, remains vehemently opposed to Michael having a relationship with his father. After returning to his grandfather’s mansion, Michael decides to make his way to Las Vega to see his father compete in the arm-wrestling tournament. In an epic get-away, Michael sneaks out of a window, steals a pickup truck, drives to the airport, and becomes a stow away on a flight to Las Vegas. His efforts pay off and he is able to make it to the tournament in time to see his father perform.

While on the road with his son, Lincoln Hawk spots a few teenage kids having fun at an arcade. Lincoln proceeds to tell the biggest kid in the bunch that his son can beat him in arm-wrestling match and that the two of them should square, best two out of three. To sweeten the deal, Lincoln tells the kid he’ll give him ten dollars if he can beat Michael. Being at least a year younger than his opponent, Michael loses the first match and finds the experience discouraging. However, after being told he must face the challenge head on, Michael proceeds to beat the bigger kid twice in a row, winning the bet and finding new-found self-confidence.

Later, at the arm-wrestling tournament in Las Vegas, Lincoln tells Michael there’s a possibility he might not win the final match. Michael won’t tolerate his father’s self-doubt and reminds him of his own words following the incident at the arcade. Lincoln concedes that his son is right and reassures him that he will enter the championship match confident, with an expectation of emerging victorious.

3) Protagonist Who Refuses to Give Up

More than anything, Lincoln Hawk wants the chance to raise his son Michael. The winner of the arm-wrestling tournament will receive a large some of money and a brand-new semi-truck. Being a truck driver by trade, Lincoln would have the resources and the knowledge to not only start his own business but gain custody of his son with the spoils from the tournament. Aware that a victory for Lincoln Hawk would mean a reunion between he and Michael, Jason Cutler summons him to his suite in Las Vegas. He offers him $500,000 and a new truck if he drops out of the tournament and promises to stay away from Michael. Lincoln refuses. After beating up Mr. Cutler’s security guard (played by legendary wrestler Terry Funk), he storms out of the suite and proceeds to rejoin the tournament. 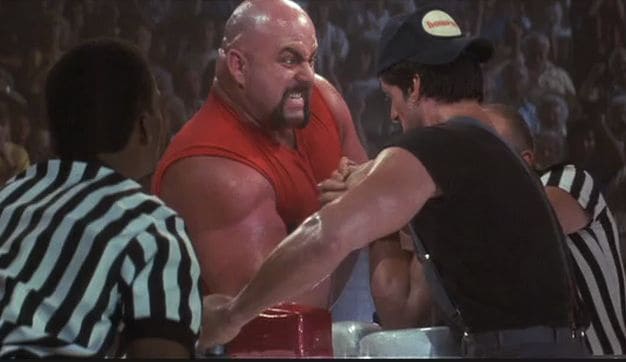 Bull Hurley, who had a run in with Lincoln Hawk at the diner, is the undisputed arm-wrestling champion of the world. He hasn’t lost a match in five years. Lincoln Hawk has made a name for himself in unsanctioned events, but in the professional ranks he is a newcomer. It is Hurley that Lincoln must face in the championship showdown. If ever there was a David vs. Goliath scenario in a sporting event, this would be it. No one in attendance believes Hawk has a chance to beat Hurley.

Bull Hurley is not just bigger than Lincoln Hawk, he’s clearly stronger. During their match, Hawk slips out of Hurley’s grasp and is almost disqualified. To ensure this does not happen again, the referee orders the two competitors to be bound together with Velcro straps. In an epic back and forth that sees Hawk almost succumb to the champion’s strength, the challenger is able to overcome the odds and gain an improbable victory.

The arena goes wild after witnessing an upset for the ages. Lincoln Hawk has done it. He’s not only the new arm-wrestling champion of the world, he also has the resources to start his own business and take care of his twelve-year-old son. Michael leaps into his father’s arms and the crowd celebrates even more. Seeing the champion lift his son onto his shoulders is the perfect conclusion to an epic performance.

This 1987 motion picture was released during the Golden Age of action movies and it captures the aura of the time. If you haven’t seen this film and you can consider yourself an action movie fan, you’re missing out. Great casting, semi-trucks, big muscles, fight scenes and an epic conclusion make Over The Top an absolute must see for action fans everywhere.