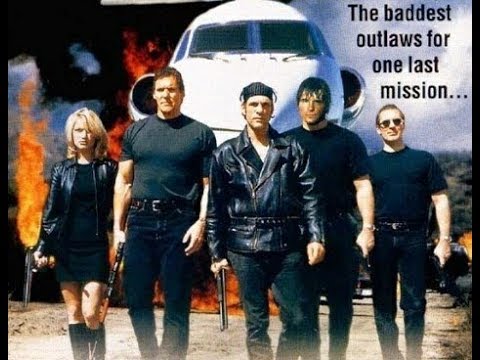 A “who’s who” of ultimate B-movie action stars!

The Bad Pack. Cool title. Cool cast. Going in, I expected this to be a 90s b-action version of The Expendables. While it did have elements of it with the general story, this left me with a bit of an underwhelming feeling. Especially with the finale. We’ll get to that later.

It certainly did not match up to the tagline boasted on the cover, saying it blows Con Air off the screen! But somehow, I still enjoyed it, thanks to the cast who rose above the lower budget they were given. Let’s dive in…

Robert Davi and the bad pack

The Bad Pack centers around a small town on the border of Mexico and Texas. A town that is being attacked, terrorized and ruled by a large militia group led by Marshall R. Teague (Road House/Armageddon/The Cutter).

The townspeople finally have had enough and want to fight back, but don’t have the means to. So a couple of them go on a quest to Los Angeles in search of some help. They get info on this former green beret who might be able to help. The problem is, they have no idea what he looks like. They are at a diner, contemplating turning back, when a group of masked thugs come in to rob the place.

In one of the cooler scenes of the movie, the one and only Robert Davi is introduced as he takes out the thugs. They then realize, this must be our guy! You can guess how the story goes from then on, after some convincing, Davi decides to help them.

Before we go any further, what can I say about the great Robert Davi (License to Kill/Action Jackson/Raw Deal/Expendables 3). So underrated as an actor! He has always had that old school, Clint Eastwood style persona to him and he brings it here in a rare turn as the hero of the film. Yes he had smaller roles in Die Hard and No Contest, but seeing him take on lead good guy duties was different and he pulled it off.

The Rest of the Rowdy Crew

Before making it down south, we see Davi recruit his old buddies. Wrestling legend turned DTV action star ‘Rowdy’ Roddy Piper (They Live/Back In Action) is introduced as a burned out race car driver. The Schwarzenegger look and sound-alike Ralf Moeller (Best of the Best 2/Universal Soldier/Cyborg) now earning chump change as an underground fighter.

They break a straight-jacket sporting Patrick Dollaghan (Kill Slade/Under Surveillance) out of a literal looney bin. Larry B. Scott (Revenge of the Nerds/The Karate Kid) is the “can do” man for the group as he hooks them up with intel and a plane ride there. The beautiful Shawn Huff (100 Mile Rule/TVs Martial Law) is a ‘cleaner’. She is also the real-life wife of the film’s director and writer Brent Huff.

On the other side of things, joining Teague is Brent Huff (9 Deaths of a Ninja/Scorpio One/Hijack) himself, who is actually revealed as an undercover agent. Teague and company leave him for dead and he eventually is found by our band of heroes and joins in on the fight for good.

A couple other cameos I have to mention – Vernon Wells (Commando/Stranglehold)! He didn’t really get to blow off too much steam or screen time here, aside from one scene as a biker. Still, always awesome to see pop up. And then we get veteran stuntman and martial artist Jeff Pruitt (Sword of Honor/Mission of Justice) throwing a few kicks in a beatdown against Mr. Huff.

Let me just say I did enjoy the movie for the most part, I enjoyed the build up and each of the actors that you would want to watch the movie for were fun and likable. But the finale – oh the finale, could have been so much better! It seems like everyone besides Davi weren’t given a ton do in the action department…aside from some shooting and aside from Shawn Huff getting a solid enough fight where she got to show off some nice moves and kicks.

Davi did build up a decent kill count, but the showdown with Teague was very quick and cut short, hand to hand wise. He just ends up shooting him a few times, before the place blew up. I will say I did like the Davi/Teague scene at a bar earlier on in the film. Teague asked him why he is doing this, why he is sticking up for these people… to which Davi replies, “I just got really bored with my day job”. Good scene.

All in all, The Bad Pack is not as terrible as some say, while not as great as the cover boasts. Still, The Bad Pack has that 90s action charm to it that I love. That certain magic that is gone from most films these days.