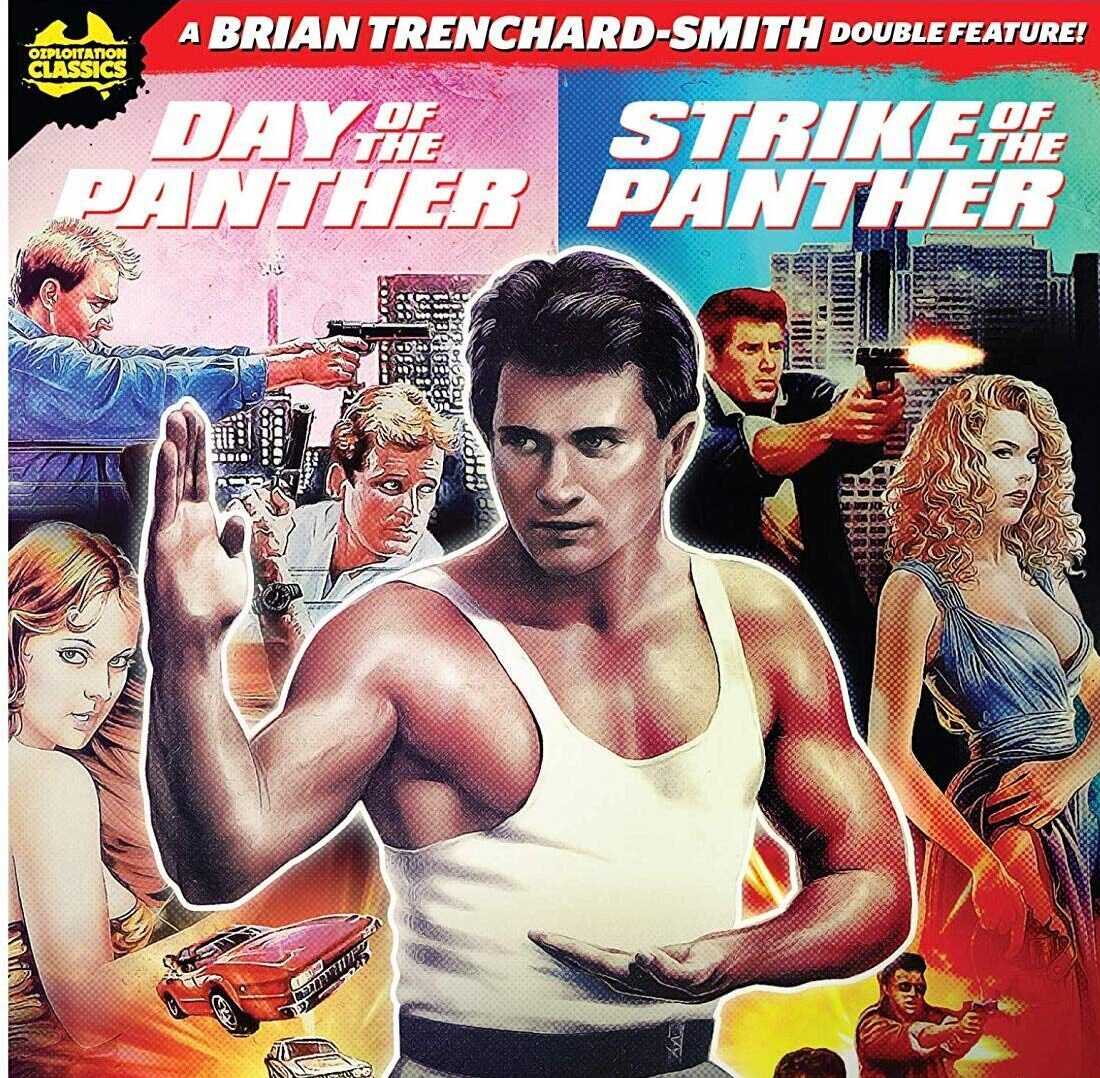 Right hooks, roundhouse kicks, and nunchucks. Fifteen-minute-long recaps, spinning elbows, and ski masks. Brothel beat-downs, a man in a chicken suit, and telepathy. You probably think I’m talking about a whole range of movies here, but no; you couldn’t be more wrong. I’m talking about one movie and one movie only: Strike of the Panther.

In what order should I watch the ‘of the Panther’ series?

Well, fanbases of big franchises often formulate specific ways in which the movies should be watched. For Star Wars some people say to start with the original trilogy and then go back to the prequels. For Harry Potter I always start on the last one and work backwards. But these are subjective orders, and you can enjoy these franchises in multiple different ways.

This is simply not the case for Brian Trenchard-Smith’s ‘-of the Panther’ series. There is only one way to watch the Jason Blade movies and that is the second one first and the first one second. The first movie, Day of the Panther, works better as a prequel that just happened to be made before the original.

You should start with Strike of the Panther.

If you want to disregard what I just said and watch it in the original, incorrect order, then read no further. One, because of Spoilers. Two: I don’t want you to read it.

What makes Strike of the Panther unique?

“Down there on the stage two gladiators were about to fight to the death. My friend, Jason Blade, was one. The other was Baxter, the thug who killed my daughter.”

Unlike many movies, the first fifteen minutes of this movie is a literal recap of the first movie. Why would you waste your time watching the first movie when you can watch both movies in one by watching the second? To add to this, when I first watched this movie with some friends, we didn’t realise this was a sequel. So, when the film opened up with a non-stop action packed ‘recap’ we truly thought we were witnessing the greatest action movie of all time.

And we thought correctly.

In terms of action, Strike of the Panther has a number of set pieces. Near the beginning we have a fight scene in a brothel and then near the end we have an even bigger, more dangerous fight scene in the middle of an abandoned warehouse.

A punch for punch analysis

After the 15-minute-long recap, the main story begins. Jason Blade has been given the task of rescuing Julia, a businessman’s daughter, from a nearby brothel.

He makes his way inside, disguising himself as a customer. This is how he gets close to Julia. Inside a bedroom with her, Jason Blade tells Julia that she ‘can kick’ her heroin problem and they he can help get her clean. He then tells her that she needs to go with him. She’s quickly convinced and agrees.

But the madam of the brothel – a harsh, blonde lady – is listening in and she doesn’t like what she’s hearing. Although it’s not explicitly said, it seems that the madam can’t afford to lose Julia.

“Security!” yells the madam. Immediately, the first of the brothels many Goons runs through the front door and heads for the stairs. It’s action time. Jason Blade, none the wiser, leaves the room with Julia, certain of their escape. But he’s wrong.

As he makes his way to the stairs, he’s tackled against the wall by Goon One. He lets out an oof and the Goon is certain that he as the upper hand. But this goon doesn’t realise who he’s messing with.

Blade responds with two vicious knees to the body to push the goon away. Once he’s pushed back, Blade follows up with two hooks, one to the body, one across to the face. Goon One stumbles away off camera. But he doesn’t look concerned. Maybe this is because he believes that he’s been saved by GOON TWO who is sprinting up the stairs toward Blade. It’s now two on one.

Is Blade in trouble?

While Blade is turned, Goon Two tries to catch him off guard and swings a wild hook. Swish, boom, pow. Blade counters with ease, knocking Goon Two out with two heavy shots.

Goon One foolishly stands back up and tries to land a shot, but Jason Blade is having none of it. Blade grabs a hold of Goon One and hurls him toward a nearby door. Goon One CRASHES through the door. Inside we see a man wearing a chicken costume, a potential nod to the Rocky film franchise.

What’s going on in this room?

Nothing good. Nothing that you or I would want to know about. Upon seeing Blade, the man in the chicken suit makes a bunch of noises more akin to a dog than a chicken. Then, like the silver-tongued devil he is, Jason Blade delivers the perfect line.

“You’re sick!” he says with a smile. He leaves the room and tells Julia to hide until this drama is over. How does he know it’s not over? Because he knows there can’t just be two goons. There never is.

Blade makes his way down the stairs where he’s met by Goon Three. Blade wastes no time. He kicks and punches Goon Three before lifting him up and throwing him over the stairs and onto a conveniently placed table. It’s possible that Christopher Nolan took inspiration from this for one of Bane’s scenes in The Dark Knight Rise. I’m not saying he did, but it’s certainly possible.

After throwing Goon Three, Blade thinks, to hell with this, and takes off his t-shirt, exposing his ripped body to all around. Swoon! As Blade goes to leave, Goon Four grabs him and, after a quick back and forth, flings him to the floor. Standing opposite Blade now is Goon Five who managed to find a baseball bat in the middle of Australia of all places.

Goon Four restrains Jason Blade preparing him to be smashed with the baseball bat. Goon Five pokes the bat at Blade like a snooker cue, but Jason Blade outsmarts the two of them. He ducks, and Goon Four takes a bat to the face and falls behind.

Goon Five then swings the bat at Blade twice, but Blade counters with a combo and takes the man out. The madam of the brothel who – up to this point was just watching on – lands a mean punch to Blade’s abdomen, but recoils, because his abs are made of steel. She holds he damaged hand and Blade lightly pushes her away, refusing to hit a woman.

One of the Goons from upstairs comes sprinting down the stairs for more. Now, it’s worth noting that they highlight this Goon in particular. While Blade is scrapping with Goon Four and Five, they show glimpses of Goon Two standing back up and getting ready to come downstairs. They set it up like a good old fashioned boss fight. This is what we call subverting expectations.

Because, instead, he runs downstairs and is immediately met with a spinning elbow to the face and a flurry of follow up punches, knocking him out. Why did he come back down? Why did he think it was going to end differently this time? And why did they emphasis this moment? There’s a lot of depth here and I’m not sure I’m qualified enough to break that down.

He’s back up AGAIN!

Third time lucky, he charges a distracted Blade and swings a heavy punch. He misses. Then Jason Blade beats him up even more so than the first two times. We switch to Julia. She’s tired of waiting in the bedroom, so she goes to the closet and pulls out a WHIP.

She leaves the room and whips the absolute shit out of the first Goon she sees, GOON ONE. She merks him so bad that he actually hides from her in the room that she had been hiding from them. Quite the twist. She comes down and she and Jason Blade together whoop a few more Goons, including the Goon who had already been beaten up by Blade THREE times.

Then, the Goon who Julia whipped to bits – Goon One – runs back downstairs for another battle. As a reminder, this Goon got beat up by Blade and beat up even worse by Julia, and then he decides – after hiding in a room – that he can take on the two of them together. Well maybe he can?

Alas, he cannot, and like every other Goon, he is near murdered by Jason Blade. With the fighting done, Blade and Julia escape the brothel. Keep in mind most of this was done without dialogue. Just pure action. Show don’t tell. Visual storytelling at its peak.

The Barbarians: Cannon Films’ Beautiful, Awful Wreck of a Masterpiece

I’m not going to break down the warehouse finale. Instead, I simply recommend you watch the movie and enjoy the ride. What I will say is that it involves ski masks, nunchucks, assault rifles, telepathy, and a 6 on 1 martial art fights, all of which leads up to a boss battle for the ages between Jason Blade and his worst enemy. I’ve given you a taster; now go enjoy the main course. 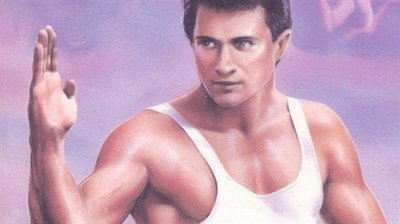 How does Jason Blade stay in such good shape?

I wasn’t sure about this at the beginning of the movie, but thankfully they explain it. He works out. We know this, because there are multiple scenes of him working out in his gym. However, he doesn’t bench press or do push ups like all of the other cliché martial arts movie. He uses the chest machine. I think it’s great that they subverted that trope and it definitely adds to the complexity of Jason Blade’s character.

How do they explain the telepathy?

Does he get the woman?

Would it be possible if you – if even only for a moment – could stop asking stupid questions? Of course he gets the women.

Where can I watch it?

You can watch Strike of the Panther on Amazon Prime. If you’d rather not give your money to Amazon Prime, then you can buy the Blu-ray or DVD on Amazon.com and give them your money instead.

Article by Seán Dalton | Author Bio: Seán is an Irishman with a love for movies of all genres and styles. He first fell in love with movies after seeing 2014’s Interstellar but grew to truly appreciate them when he first watched 1957’s 12 Angry Men. Despite attempts from Woody Allen movies to make him hate cinema, his enjoyment for movies lives on. In 2018 Seán co-wrote the book Clownbound: Take Me to the Circuits before co-writing The Absolutely USELESS Guide series in 2019. Now, for some reason or another, he’s here to give his opinion on all things movie related. Follow him on Letterboxd.