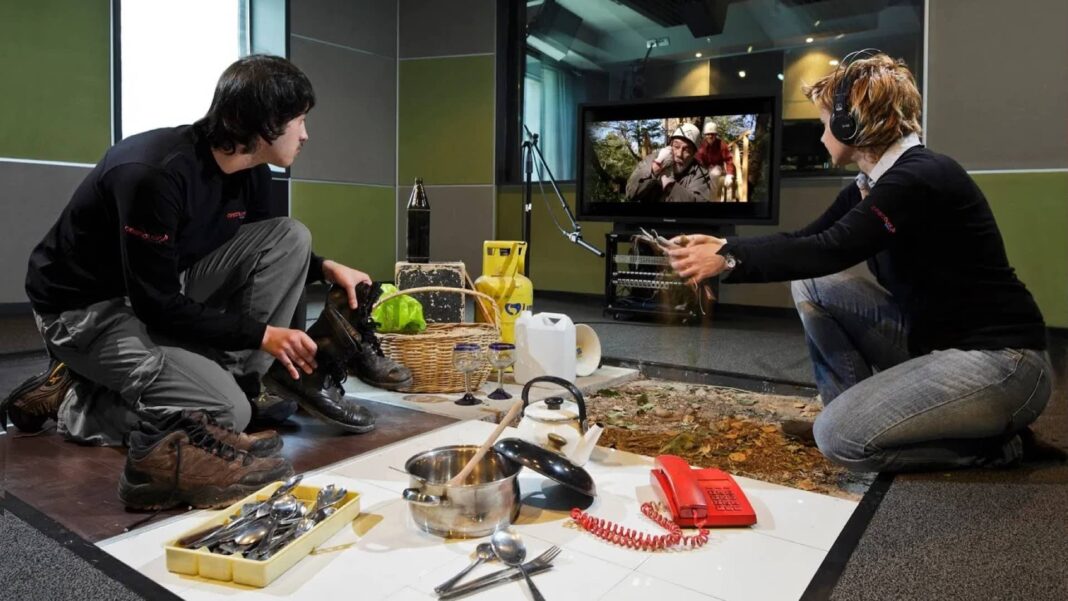 In the world of film, foley artists are charged with recreating everyday sounds on the fly to match what is happening on the screen. This contrasts with a regular sound effects editor who will usually use a variety of pre-recorded sounds they have stored in a well-organized soundbank instead. With computer storage capacity increasing every year, you might think that the days of the foley artist are numbered; on the contrary, the results produced by a foley artist are often far superior to what can be done using pre-recorded sounds.

Foley artists are not responsible for recording dialogue or music – these are handled by different departments with specific duties in each of these areas. Vocals that could not be captured perfectly during shooting will be re-voiced by their respective actors for a dialogue track, whilst dedicated musicians and sound effects engineers will combine songs, royalty free music, and foley work into a final master soundtrack.

The most common setup for a foley artist will usually include a dedicated foley stage with viewing equipment, recording equipment such as microphones and a mixing desk, and a variety of props which are used for re-creating a wide range of different sounds. At least two foley artists will usually work together with a mixing engineer on a single foley stage so that multiple different sounds can be combined to produce a larger number of effects.

When such a setup is implemented correctly, a very high-quality selection of sounds – each of the perfect lengths for each scene – can be produced. These well-recorded sounds will then be used to substitute for almost all the sounds that were captured during the shooting phase of the project. This is essential because microphones cannot always be positioned in ideal locations during filming, and instructions from people working on the video side of the project will often leak into the sound that was captured naturally whilst on set. There are many other reasons to use foley artists too, including:

The Origins of Foley Artistry

You have probably wondered by now where the term “foley artist” came from; it’s a job title that pays tribute to the creativity of a legendary soundman named Jack Foley, who worked with Stanley Kubrick during the mid-to-late 20th century. Jack is believed to be the world’s first foley artist and came up with several of the most common props that are still used in the movie industry for foley work today. Jack’s work was uncredited at the time despite his enormous contribution to much of Kubrick’s work, so the fact that an entire profession is now named after him is surely a fitting tribute to his innovation in this area.

Jack Foley broke his work down into three main areas, signifying the importance of parts of a film that you may not have considered until now:

Whenever an actor is moving around the set with only atmospheric sounds in the background, the sound of their footsteps is almost certain to require exaggerations to set the scene. Foley artists will have a variety of different shoes and surfaces available to them – a shallow pool of water, a pit of gravel, and so forth, and will also pay attention to the shoes that the character is wearing, their weight, how fast they are moving, and their general demeanor, to try and capture the correct atmosphere in sound.

When people move, they will often make noises other than their footsteps – think of batman’s cape blowing in the wind, or the sound of a leather sofa squeaking as a person shifts their weight.

Finally, specific sounds are created using props that mimic the sound of every day (and not so every day!) objects that can be seen on screen. Sometimes the prop used by a foley artist will mirror that which is genuinely making the sound – for example, a person writing a note on a piece of paper. More often than not, however, a foley artist will have a more… dedicated technique for re-creating certain sounds.

A famous example of this is the cracking of celery to mimic the sound of a bone being broken, but there are dozens if not hundreds more. A garage door being hit hard with a ball can create an amazing authentic thunderclap if the materials are correct, a fact you are probably aware of if you have both children and a garage! Foley artists can also be masters of simulating sounds with their voices too.