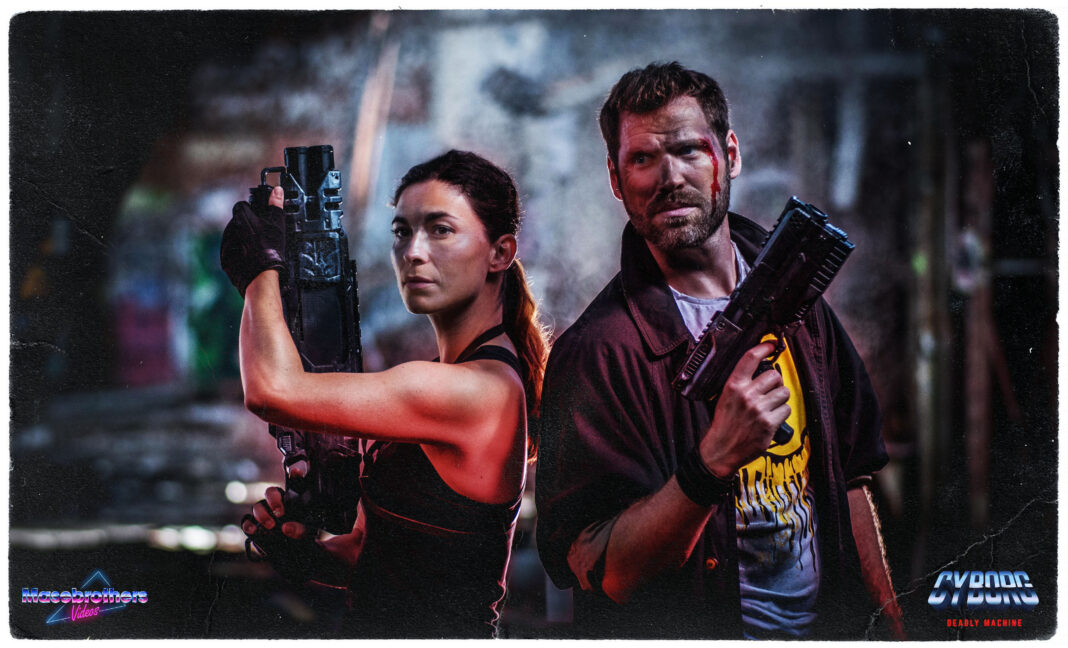 The Masebrothers are a crew of three talented filmmakers (Mathieu Cailliere, Sebastien Petitjean, and Jeremy Vazzoli) who are embracing the golden era of VHS tapes and kick-ass action movies.

Their first feature film Cyborg: Deadly Machine was a fantastic piece of indie Sci-Fi action, and with their latest production Dragon Cop to be released soon, it was the right time to sit together with Mathieu (Mat), and talk about everything Masebrothers!

UAMC: Hello Mat, thanks for taking the time to chat. Let’s jump right in! Who are the Masebrothers, and how did you get into filmmaking?

Mat: Hi! First, I want to thank you for the interview, it’s an honor for me to feature in the Ultimate Action Movie Club! We are a friends collective from France that was born six years ago, and we produce short films and humorist videos dedicated to the pop culture of the 80s/90s.

UAMC: Your video shorts series VHS on YouTube is really a blast to watch, and it seems you’re drawing a lot of inspiration from 1980s classic movies and TV series. What’s the special thing about 1980s pop culture for you, where does the magic come from?

Mat: Thanks! We launched the VHS series inspired by these famous cassettes for the VCR where everything and anything was recorded on during the 80s and 90s (movie, series, commercials, music videos etc). I was born in the 80s, grew up in the 90s and I wanted to pay tribute to the cinematographic and television landscape of those years. Which still seems to me today much more fun and creative than what we are offered today.

UAMC: What films have been most influential and inspiring for you?

Mat: I watched a lot of old movies from the 80s/90s. I was a serious fan of Jackie Chan (Police Story, Dragon Forever), Sammo Hung (Pedicab Driver, Eastern Condors), John Woo (A better Tomorrow, The Killer, Hard Boiled), Tsui Hark (Once upon a time in China, The Blade – the one with Chiu Man Chuk), all this Hong-Kong stuff for which I pay homage in my new short film called Dragon Cop.

But I admire also directors like John McTiernan (Die Hard, Last Action Hero) and James Cameron (The Terminator, Aliens). I’m not a very big fan of today’s films which rely on a lot of CGI. I call them “Cheater Movie”, I prefer watching real things, particularly for action movies, but thank god there is your website which brings to light some underrated movies from the past, and I love to (re)discover them!

UAMC: Thank you, and I think “cheater movie” is a fitting term to describe so many action movies these days! And it’s great that you stick to old-school practical effects, like in your first semi-full-length feature, the awesome Cyborg: Deadly Machine that came out in 2020. For me it is the missing part of The Terminator trilogy, but was that actually your intention, to create the ultimate homage to the James Cameron films?

Mat: I am a very big fan of the first Terminator which I prefer to the sequel. Above all, I wanted to pay homage to this film and this universe created by James Cameron, but with my child-like eyes when I discovered it back in the day. That’s also why I was naturally attracted to everything surrounding successful films of this era like video games, figurines, cartoons, and that’s why we put all these things in the movie. But we also wanted to pay homage to Sci-Fi exploitation films of the early 90s like Nemesis by the late Albert Pyun or Richard Stanley’s film Hardware.

UAMC: I really think you succeeded in that, the film has all these elements, and much more! How did you organize the work on the movie between the three of you? Who did what?

Mat: Sebastien Petitjean worked on the script with Jeremy and me, and many things on the set. He also plays a soldier at the very beginning, and animated the cyborg skeleton at the end. Jeremy Vazzoli was the cinematographer. He also worked on the VFX and plays the scientist West, a nod to Herbert West from Re-animator. Me, I was directing, editing, VFX and doing way too much things on Cyborg: Deadly Machine 🙂

UAMC: Speaking of the VFX, there are a lot of them in the film and they all look terrific, the cyborg effects, the gore, and also the 16-bit video game sequences are just a ton of fun to watch. Can you tell us a little bit about the journey of creating the special effects for the movie?

Mat: Thanks. We have worked with some great artists like Stef Fabio and Fred Wajeman to create the machines like the T-800 cameo at the beginning or the C-9000 endoskeleton at the end. We had a limited budget for the movie, so we had to do our own SFX like the gore made with real offal (not from humans, rest assured :D). Same goes for the miniatures which were done by Jeremy and me. We wanted to recreate the look of that era of Sci-Fi films when things were real, with a childly touch in it! Jeremy Vazzoli is the one who made the full retrogaming sequence and cartoon part, and he did an amazing job in two months! I was doing VFX (Guns, explosion etc).

UAMC: For the soundtrack you worked with two well-known artists from the Synthwave community, Meteor and Fixions. How did that cooperation come about?

Mat: The artist behind Fixions is a friend of us and he contributed to the success of the crowdfunding. He was with us from the very first day of shooting our demo trailer. He plays a brutal Synthwave style that was a cool way to create a fitting sound for the world of machines. Regarding Meteor, I am a fan of his music, and I used some of tracks of his past album for the score of my previous movie Rage of Fire 2. We wanted to hire him to create some epic music to give sound to the hope of the human resistance lead by Alex & Stacy!  He made a feature with NY based artist Magic Dance to write the end credit anthem called “Ready to Fight”.

UAMC: What is it about cyborgs that is so cool?

Mat: They have no pressure, respond to a single objective and are indestructible. Seriously, I think there’s a good case to make them terrifying monsters for movies.

UAMC: What is on the horizon for the Masebrothers, what are you currently working on?

Mat: We have a brand new project called Dragon Cop. It is a short film tribute to Hong-Kong action cinema from the 80s a la Jackie Chan, Michele Yeoh, Sammo Hung, Yuen Woo Ping and John Woo. We have plenty of martial arts, stunts and a cool gunfight. It’s the prequel to a movie we want to release next year, and it will feature a lot of characters we have created on Mase Brothers since the beginning! To make it we will start a new crowdfunding campaign and production to make something bigger than ever! So check out Masebrothers in 2023 🙂

That sounds exciting, we’ll check it out for sure! And hopefully the crowdfunding campaign will be a huge success! As a last question, where can people find you and your work?

UAMC: Thank you, Mat, for giving us a glimpse into the awesome retro-movie world of the Masebrothers, and until next time!

Mat: Thanks a lot Thomas for the spotlight! We will keep an eye on the Ultimate Action Movie Club to discover some movie gems!