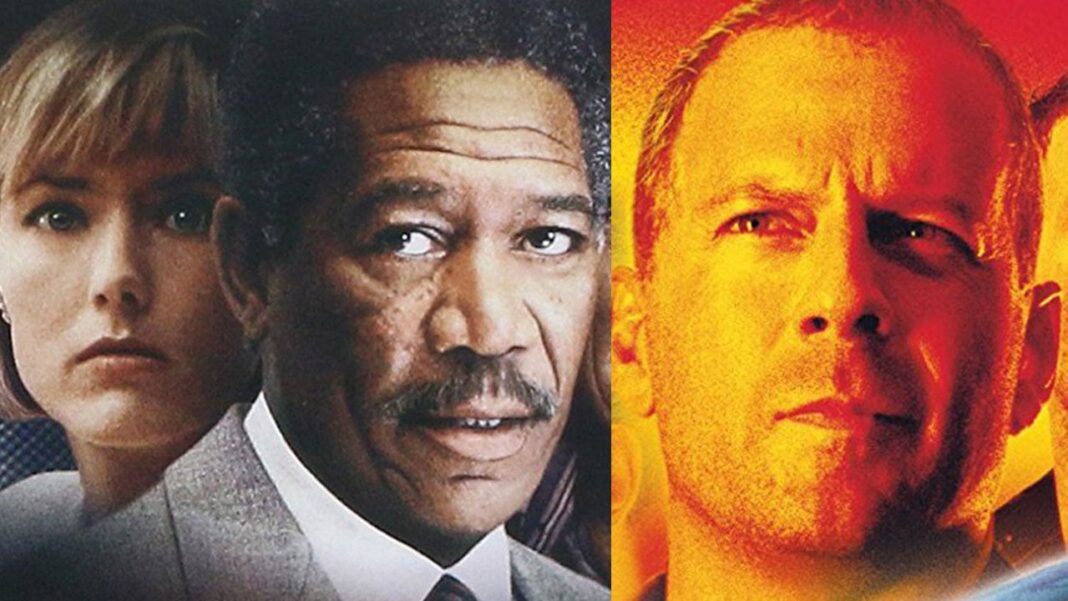 If Deep Impact is Infinity War, Armageddon is Endgame. 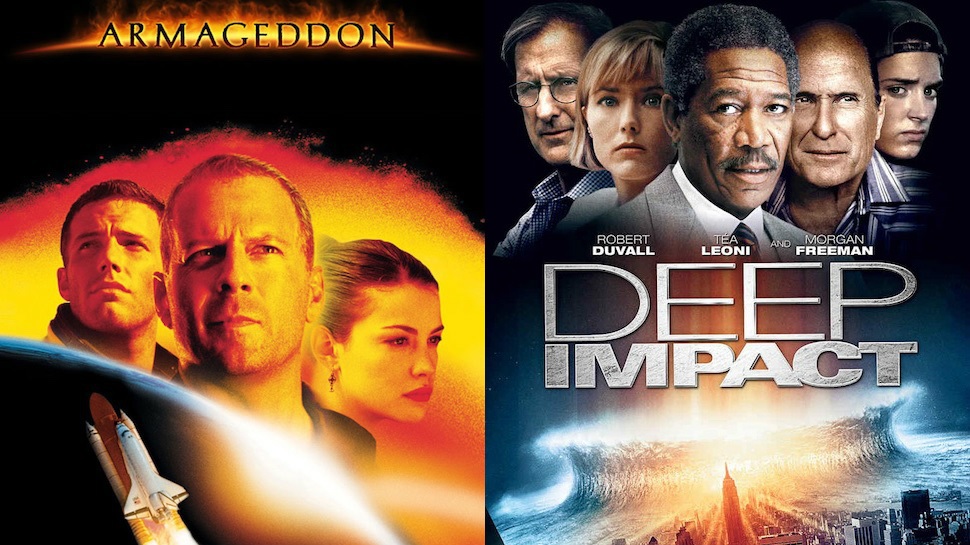 Man, what an odd year 1998 was. I might have only been 11, so my memory isn’t quite as nuanced as someone who experienced it of age. Maybe at the time, in my head, I thought: “oh this is cool, all movies that come out in the summer are about asteroids and space heroes.” And damn, how cool would that be if that actually were the case!

But no, out of happenstance and competitive studio-ing, 1998 saw both Michael Bay’s Armageddon and Mimi Leder’s Deep Impact hit box offices. Both movies had big budgets, big stars, and big special effects, as well as some big names behind the scenes with JJ Abrams penning for Armageddon and Steven Spielberg – for a time – helming Deep Impact. And to many, they’ve been sandwiched together in memory from now until eternity as two, similar, yet slightly different versions of the same tale.

Now, not that we’re in the same exact end-times as presented by an extinction level asteroid event, it’s an interesting lens to look back at these two disaster/thriller/action movies to see what comfort, insights, and just plain entertainment they can provide. Which is just what I did! So, let’s see how they’ve stacked up. 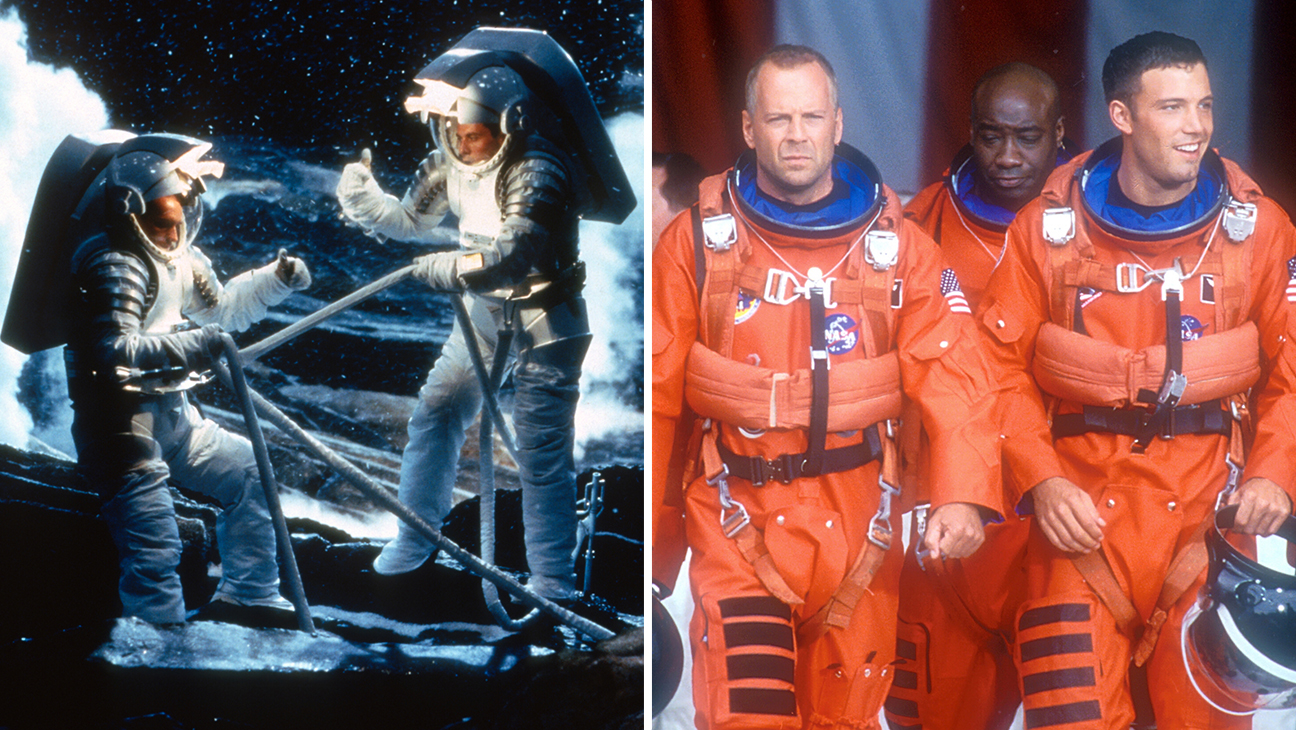 A little more research though for ya first. Arguably, when first released, Armageddon was the initial standout at least from a box office perspective. Although, while Armageddon cost $140 million to make and eventually returned $553.7 million, and Deep Impact cost $80 million and returned $349.5 million, you could make the argument that both were solid blockbusters that resonated with audiences quite well.

Critically, Rotten Tomatoes reports scores of 39% for Armageddon and 44% for Deep Impact, and as I recall from then – as well as through the years – it’s been the talking point that Deep Impact is the more nuanced and classical film, while Armageddon is the more ridiculous, style-over-substance flick.

And you can almost trace this contradiction between Deep Impact’s centermost figure of Morgan Freeman as President Tom Beck speaking calmly and poignantly in a doomsday press conference, and Bruce Willis’ Harry Stamper chasing Ben Affleck’s A.J. Frost across an oil rig with a shotgun after catching Frost sleeping with his daughter as scenes to best paint this difference.

So, when viewing Deep Impact now, I have to say that it really is a solid disaster film that is quite enjoyable. It’s a bit familiar to me just because I’ve seen Armageddon so many times, but it also felt much fresher without much of a memory of it. Also, with so many characters and narratives, it’d be hard for anyone to recall every damn scene from this movie – especially those that don’t involve Morgan Freeman.

I get the assessment too that Deep Impact is more nuanced – or at least presented as the “thinking man’s movie”. We have a great “lead” role for Téa Leoni as aspiring reporter Jenny Lerner, and we spend probably the most time of anyone on developing her character-arc as she inadvertently leads us into a doomsday disaster flick from a rather inconspicuous journalism-careerist film.

We also have a huge list of other great actors and character performances for some big names like Robert Duvall as the “old man” comet pilot, Elijah Wood as the wide-eyed budding romantic who discovers the aesteroid, Lerner’s still-reconciling-with-their-divorce parents Vanessa Redgrave and Maximilian Schell and too many more to mention because – like I said – there are a LOT of side-narratives in this.

We also get, as many critics and those from the scientific community are quick to point out, a much more realized and rational cinematic response to what would (or “could” of course) happen if such an event were to occur. Much like Freeman’s calm and deep voice explains to us, both the viewer and the nation that he is addressing, the best minds in science are on the case and we’ll be in the best of hands.

Of course, things still go wrong. And, over the course of two hours we have all these great characters thrown against each other while we’re left with short updates from the President which basically say, “it’ll be OK, but also, we’re fucked”. And, low and behold! We’re left with the only hope being these astronauts – who have already failed at one mission – that have to save the day.

And with this ending I do have to take gripe. As great as the rest of the movie was, it leaves us grasping at straws once the narrative shifts back to Duvall and his ragtag crew, who we barely know! We’ve barely met Duvall’s character to be honest. Instead, when shit is hitting the fan I’m wondering; how will Elijah Woods’ love story save us all? How will Tea Leoni’s reconciliation with her father stop a tidal wave?

Perhaps this was the point the movie was trying to make. Which could be fair. When facing uncertain times, and up against forces greater than what society can control, it’s these human relationships that matter. Which is a beautiful sentiment, but not quite that reassuring today. Especially when we have an example of a counter-narrative where there are action heroes to save us!

Basically, after watching Deep Impact, I had no option but to fire up the VCR and put in Armageddon. Deep Impact left me with a sinking feeling, much like Morgan Freeman’s Tom Beck must have felt when he had to address the nation for the last time, knowing, despite all his great posterizing, that we’re still all ultimately doomed – and all I could think is, man, I bet this man wishes he could have met Harry S. Stamper.

A lot of the – later – hate for Armageddon is most probably backlash for Michael Bay and his decades of Transformers movies and over-sexed, over-CGI, over-nonsensed mega-blockbusters which – along with a douchey personality – have made the director, to put it lightly, a polarizing figure. Back in 1998, though, Bay was merely seen through the lens as an up-and-coming commercial/music video director who had fresh, new ideas of how action movies should be: big, loud, obnoxious at times, but also fast, funny, and only at the last minute, sincere.

In one of the great ironies of the world, Armageddon (along with Bay’s The Rock) are both in the Criterion Collection, while Deep Impact is not. And in the DVD commentary we have the famous clip of Ben Affleck taking the film’s ridiculous premise to task over the montage of Bruce Willis’ and his rowdy roughnecks teaching NASA scientists a thing or two about how to build a space drill. Get ’em Ben!

But, in viewing Armageddon today, it really is entertaining as hell. The pacing is superb, the characters aren’t deep or exactly well-thought out, but the actors across the board seem to understand how to say their lines and then get the fuck out oughta the way so the action can continue on.

In the starkest contrast to Deep Impact, the NASA mission control scenes are lightyears apart. Both are set up to present the vast resources of the United States government and being helmed by the greatest minds in the world, yet it’s the Armageddon ones that are much more reassuring, even if the dark lights, needless instruments and an almost “war-room” like atmosphere is more reassuring science fiction than cold reality.

Narratively speaking, Armageddon also stands out with its decision to make the movie really only about three characters, while Deep Impact doesn’t quite appear able to decide on any one, or few, of its multiple. Armageddon’s leads include an “older” action star in Willis, an up-and-coming actioner-esque hero in Affleck and the completion of a father/daughter/boyfriend triangle with Liv Tyler. And, when the movie really gets going heading into the third act, it’s really all about these three and the singular focus of the narrative stakes which have been building solidly all movie: it’s time to blow up this asteroid.

Spoilers: they do! And it’s great. And all the characters fall into place from pre-asteroid death, to post-asteroid resurrection. We don’t have to have Morgan Freeman come back on-screen to reassure us that this ending will be better for humanity in the end (because he’s never been wrong about anything like this before), we don’t have to take our small solaces in our loved ones under the shadows of colossal tidal waves. Instead we get to take large, America-sized solaces under fireworks with the rest of the rowdy drill crew as everyone drives off cheering into the sunset.

Feel free to disagree with me on this, it’s an interesting time to review these two disaster-action classics. For some, comfort might come from a Bay-ification apocalypse, while others might desire an action Robert Altman-verse think-piece on how human demise is mutually shared. But, I’m pretty sure I know which one I’m going to watch when shit hits the fan.