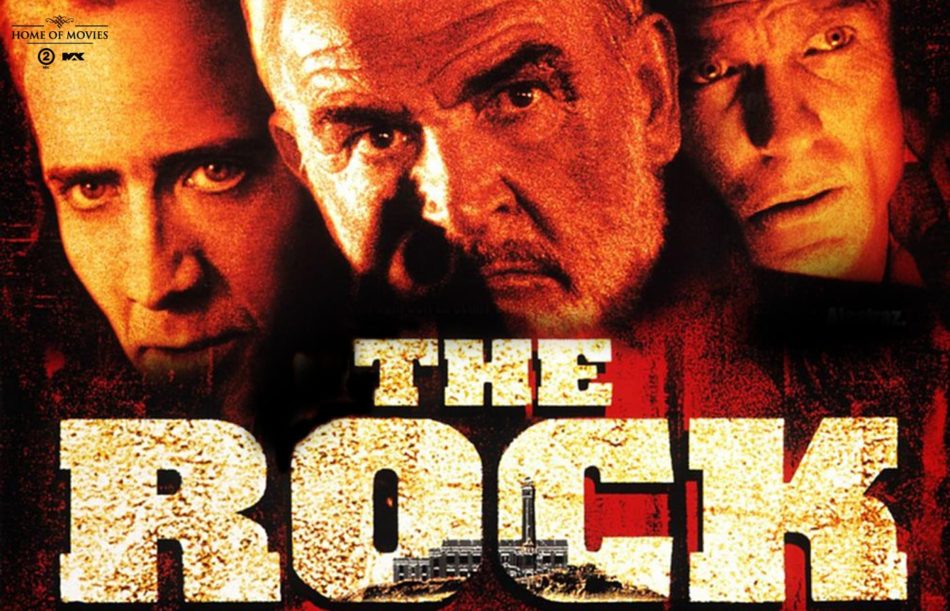 At the 1996 Academy awards, Nicolas Cage was awarded the Oscar for best actor in a leading role for Leaving Las Vegas, cementing his status, at the time, as one of the best actors of our generation. Now, most actors would have parlayed that achievement into a series of Oscar bait movies. But no, not Nicolas Cage. Cage said “To hell with that, I want to be the greatest action hero ever!”

He had tried before. He starred in the 1990 action movie Firebirds aka “Great Value Top Gun, but with helicopters”. And it failed. But he persevered. And over the span of one year, he gave us three of the greatest action movies known to man, a series of movies that have become known to the world as: The Beige Volvo trilogy. Named for the reference/appearance of a beige Volvo in each movie, this series of movies took cinema fans by storm.

And while Stallone and Schwarzenegger were slumming it in movies like Cop Land and Batman & Robin, Cage was kicking all the ass in movie theaters around the globe. Probably why they did those movies. No ass left to kick. Cage kicked it all into outer space. But I’m getting ahead of myself here. Let’s us settle down, and start with Chapter one: The Rock (1996).

The Rock was released on June 7th, 1996. It was produced by Don Simpson and Jerry Bruckheimer (their final movie together, as Simpson passed away during production.) Also, this was the second film directed by Michael Bay, released a year after his debut, also for Simpson/Bruckheimer, Bad Boys. Yes, this was directed by Michael Bay, the cinematic apocalypse himself. But, and I say this with pure sincerity, this was a time where Bay was being touted as the next great action director. And it all came from this movie. The success of Bad Boys was attributed more to the pairing of Will Smith and Martin Lawrence than it was to Bay’s abilities as a director.

The Rock was where audiences and critics first took notice of him and declared “Hey… this guy is really good!”. Then two years later, he released Armageddon, and everybody declared “Well, maybe not.”. And you know, that’s kind of a shame. Because some of his movies have turned out to be almost unwatchable, his entire filmography is considered a joke. And good movies like this one, The Island, as well as 13 Hours, have become guilty by association. And that’s just not fair. Because this movie kicks so much ass! So enough background, let’s get into the juicy bits! 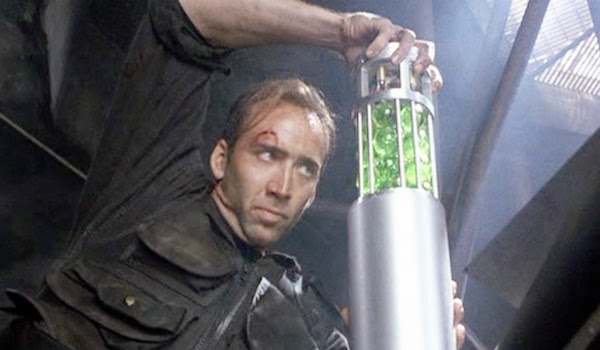 Cage plays Stanley Goodspeed (I’m not kidding), a meekish FBI agent who is recruited by the government when five star general Francis Hummel, played by acting great Ed Harris, seizes control of Alcatraz Island, along with 81 tourists, and declares that if a huge sum of money is not paid to the families of his fallen comrades that the government has neglected over the years, he will fire 15 missiles onto San Francisco that are loaded with a deadly poison gas.

Goodspeed, whose specialty is chemical weapons, is assigned to accompany a crack team of Navy SEALs to infiltrate the island so he can neutralize the poison gas within the missiles. Coming along is John Mason, played by Sean Connery, an imprisoned 60 year old former SAS agent who is tasked with leading them into the island undetected, as he is the only man to have ever successfully escaped Alcatraz. I guess the Clint Eastwood movie Escape from Alcatraz is non-canon in this universe.

Anyways, after things take a turn south, Goodspeed and Mason are the only ones left to stop Hummel and his squadron of badass commandos. Will this unlikely duo be able to band together to stop the missiles, take down the bad guys, and save the hostages? Does a bear s*** in the woods? 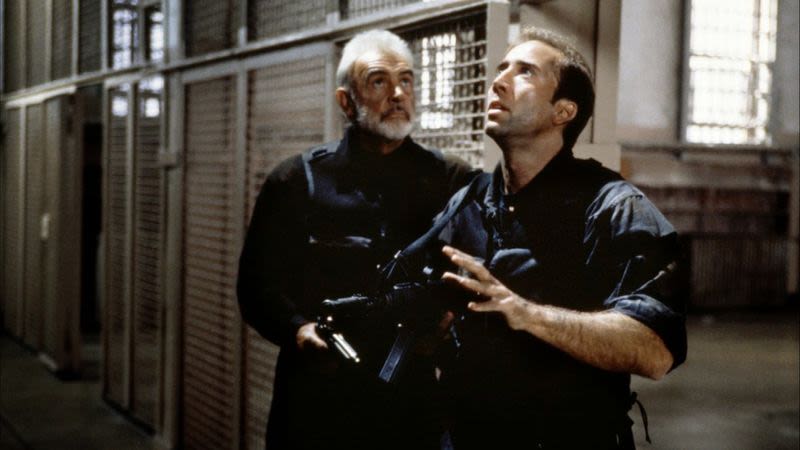 The movie has truly great set pieces to go along with its compelling story. One of the many things I like about it is how every character’s motivation is clear and understood. Especially Hummel. Although he is the main villain of the movie, you completely understand where he is coming from. And even though his actions are excessive, you can somewhat sympathize with his position.

Connery’s Mason has been wrongfully imprisoned for over 20 years and just wants his life back, Goodspeed wants to keep his pregnant fiance safe, and Captains Frye & Darrow, played by Gregory Sporleder & Tony Todd, just wants their f***ing money. Everybody is thought out. And the performances are spot on. Harris. Connery. William Forsythe. John Spencer. Todd. And Cage. Oh Cage. How I love you. Cage plays the character of Stanley like a nerd who is kind of cool, but thinks he’s much cooler than he actually is, but in reality is a nervous wreck.

I could see this role in the original script being intended to have been played more straight and narrow, but that just wouldn’t do it for Cage.  He wasn’t full throttle Cage in this, but his little “Cage-isms” seep through into the character of Stanley Goodspeed. For instance, Stanley is so meekish, that he doesn’t even curse. He’s shouts words and phrases like “Gee-whiz” and “A-hole” in place of profanity when he’s upset. And it works so well.

This is what I call “Smooth Jazz Cage”. As opposed to something like The Wicker Man or Ghost Rider, which is “Hard Rock Cage.” On the action side, most of the heavy action bits are handled by Connery, who I must admit hasn’t been this badass since his 007 days, but Cage gets to kick some ass. He’s shooting guns, punching bad guys, doing hero leaps in slow motion.

I guess because he’s more or less the sidekick, he was saddled with fewer things to do than Connery. But it’s still cool action stuff. Just think of this as a precursor to his role in– Oh. Wait. Let me stop myself right there. Must not mention THAT just yet…

But I know, I know. What about the action?? Well… The Rock is filled to the brim with amazing action. Shootouts, fistfights, car chases, and sooo many explosions. S**** gets blown up real good in here. Just some of the most beautiful, humongous orange fireballs to ever grace a movie screen. And a lot of them in glorious slow motion. Any standout sequences? Well, take your pick. There are so many to choose from. The car chase through San Francisco, which in my opinion rivals the legendary one from Bullitt.

And any scene on Alcatraz. The washroom scene. The underground tunnel. The morgue, etc etc…This is action movie heaven. Everything expertly staged and choreographed. And this is the 90s, so no shaky cam, or quick cuts. Amazing static shots. Tight editing. All of it in perfect view. That’s how I want to see my action. Crisp, clean, and crystal clear. Bay was in fine, peak form when he directed this. Definitely the best one in his filmography, in my opinion.

And major points to Hans Zimmer for writing such a incredible score for this movie. Definitely one of my favorites scores from him. It perfectly captures the epicness of the proceedings. It was this score and the one from Crimson Tide that made Zimmer one of my favorite composers working today.  Any nitpicks? Maybe two. 1. While I completely understand his stance, I’m don’t agree with the actions of Commander Anderson, played by Corporal Hicks himself, Michael Biehn.

SPOILER ALERT!!! As they’re trying to gain access into the prison, they unintentionally trigger a motion sensor, alerting Hummel and his team to their position. And when Hummel asks for him to peacefully surrender, Anderson defiantly rejects the notion. This confrontation unfortunately leads to the deaths of all the SEALs. If I can quote my uncle, who was in the military, Anderson is a “Proud Idiot”. A man who put his own pride before his men. He said that if he were in the same situation, he would have surrendered. Not out of fear, but for the safety of his team. END SPOILERS!!!

And 2. The stereotypical gay hairdresser. Although funny when it was first released, it is now seen as a sign of things to come from Bay, who has become synonymous with all things insensitive. But those are just minor quibbles.

When Blockbusters (and Nicolas Cage) Were Ultimate

So in closing, I truly think The Rock stands the test of time as a really great action blockbuster almost 22 years after its release. Man, 22 years ago. Heh. I remember when this movie came out, I was in Junior High School. And a bunch of us in school were declaring it the best action movie ever. I know what you’re thinking: We might have gotten a little carried away with that declaration.

But, even though I do admit it’s definitely not the greatest action movie ever, I still think its right up there with the best of them. And the first step of things to come from Cage on his quest to become the definitive action star of the 90s. It’s just amazing to recall. The same man who starred in movies like Moonstruck and Vampire’s Kiss went on to give us three of the best action movies the 90s had to offer. He became cooler than the other side of the pillow to me and my friends.

A Cage movie was an event after that. It had to be seen. No hesitations. I know that maybe hard to fathom these days, but Cage was the man back in my youth. I guess you just had to have been there. But… this is just scratching the surface. The tip of the iceberg. Because nothing could prepare us for the greatness of the next chapter in the explosive Beige Volvo saga. The end all, be all of 90s action cinema. Of course, I’m talking about… Con-Air! But that… is a tale for another time.

Article by The Cinema Drunkie – a cinematic alcoholic from the mean streets of Brooklyn, New York who spends his all of his free time getting drunk off the beauty of all things movie related… and vodka. You can check out his blog here. Let us know what you think about the article in the comments!