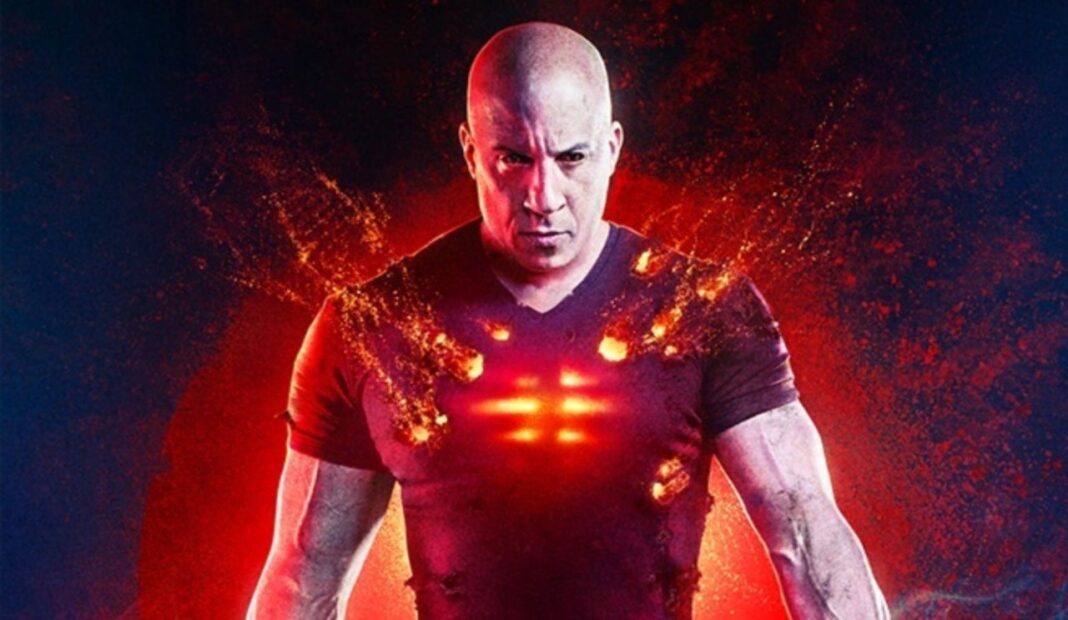 The Diesel-man delivers enough big hits to give this sci-fi superhero actioner a fighting chance to spark a franchise. 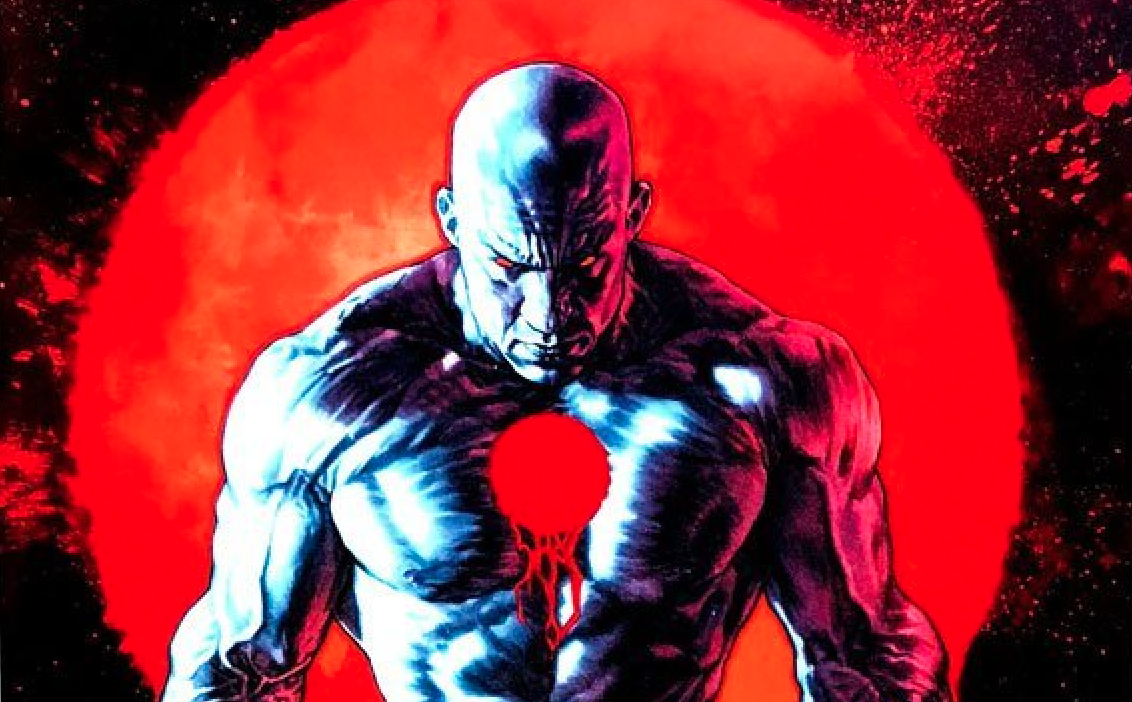 I don’t know if we’ve done a true Vin Diesel article here on the Ultimate Action Movie Club website yet, so, I’m quite honored to take a crack at it. I can’t claim to have seen all of the man’s work, but I’m pretty familiar with his classics. Although, I’m also not sure what are all the proper nicknames for Vin Diesel.

So far, I’ve personally come up with VD, The Diesel-man, Vinny D, and Flexy McBaritone. I’m also quite intrigued about just what level of action movie star that we can now classify the man. But more on that below, let’s talk about Bloodshot which is set to hit theaters here on March 13th, 2020.

If this article is ever found later, I’d probably also have to preface that this movie is facing possibly one of the largest international catastrophe’s in recent memory with the coronavirus outbreak and it will most definitely affect this film’s opening – and maybe even its overall success and legacy. I don’t make the rules, that’s just how it works.

Bloodshot is the story nano-technologically-enhanced former marine who’s been brought back to life to be turned into a killing machine. Based on a comic book, this is the first installment in what could be a new superhero franchise. And, I gotta, say: Bloodshot does have a lot of great stuff going for it. The biggest thing it has going is Vin Diesel going absolutely beast mode from pretty much the start to the finish.

The actioner starts in typical action movie fashion. Vin Diesel is a rough-and-tumble marine who doesn’t need no backup as he dives into an opening sequences that might have been scripted as the opening cut scene to the latest Call of Duty game. However, despite a beautiful post-raid romp with his girl at the sea, fate catches up with him and he’s killed at the hand of a mysterious captor… and with his dying breath he swears his revenge.

What follows is the Diesel-er waking up in a fancy lab and meeting the malevolent billionaire scientist Dr. Emil Harting (Guy Pearce who is probably my favorite non-VD character in the whole film) who explains to him (in typical Arnold in Total Recall or Stallone in Demolition Man) the crazy sci-fi plot and technologies that are literally inside of him. “Nanomites” are now Vinny’s bloodstream and he has superhuman powers of strength, regrowth and a cyber-connected mind. 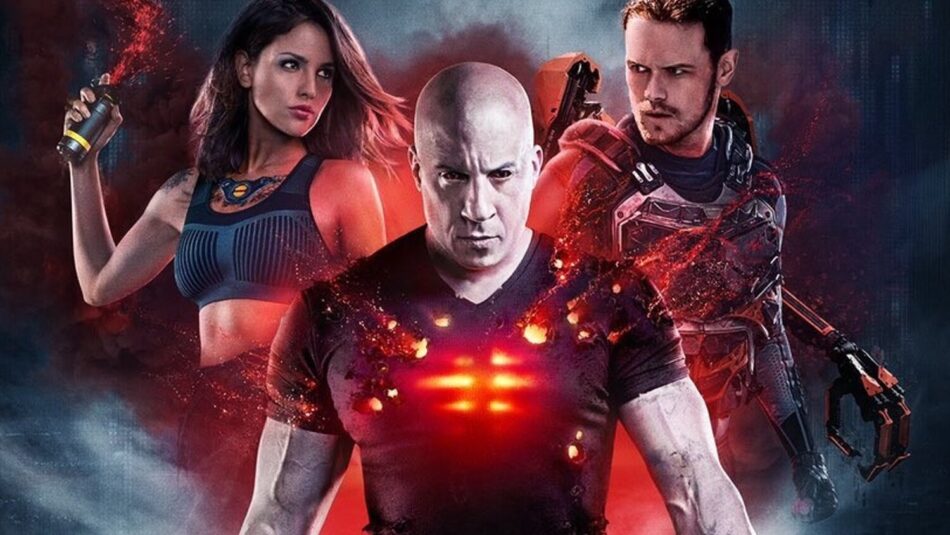 The Diesel Machine is then introduced to the rest of his “wounded warrior crew” as he puts it. We have Sam Heughan as Jimmy Dalton (a dude who lost his legs and has crazy mech ones), Toby Kebbell as Martin Axe (a guy who lost his sight so has super-sight now), and Eiza González as KT (Vinny’s eventual lady-friend who lost her ability to breath so she has a respirator… that allows for poison filtration).

All this setup happens pretty fast and is the initial crux of the film. I won’t get into any spoilers from here, but I will say that this whole first act is by far the strongest and most fun. And it ends with a plot twist (which, if you watch the trailer above it reveals, so, maybe try to avoid watching or reading anything before going in if you like plot twists…) that unfortunately doesn’t quite power the rest of the film at the same level. 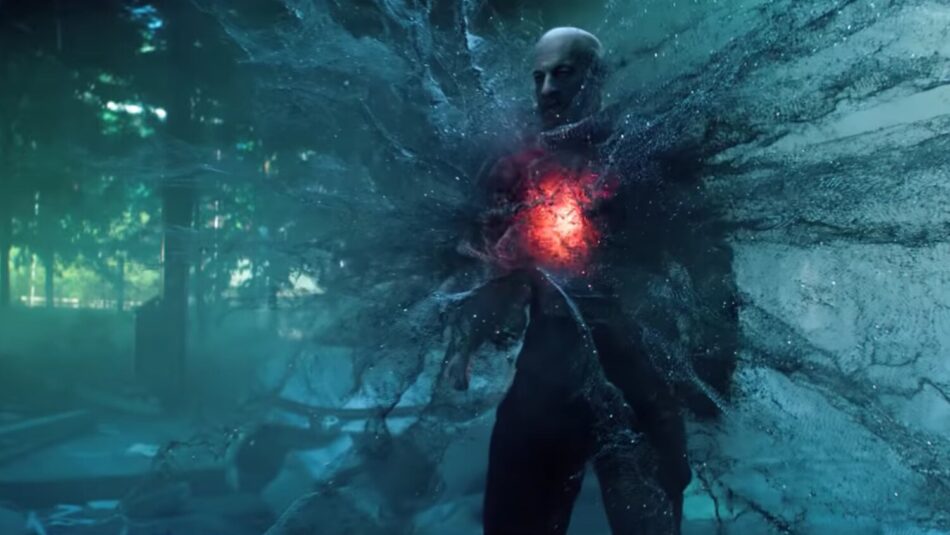 So, I will say that before the movie gets too much into the CGI-superhero mold, which it does eventually, it’s actually a quite awesome – and ultimate – action movie! Vin Diesel does a great job with the role that’s somewhere of a cross between the enlightened version of Arnold’s T-800 and his own work as Riddick.

The movie does a pretty good job of combining some of its predecessors as the Diesel does experience Robocop-style flashbacks to his previous life that spur his revenge. But it doesn’t really spend much time wrestling with any amounts of turmoil as to: should man be brought back from the dead?

The action highlights of the film might be near the middle when Vinny goes out on his own to exact revenge and single-handedly takes down an whole battalion of hired mercenaries by crashing a tanker into their convo and picking them off one by one. All while they rip his constantly-healing body apart with gunfire and explosions until VD finally gets his mark.

Eventually though, the movie does go full superhero mode and we get tons of CGI-fueled battles. I’m hesitant to compare Bloodshot, or Vin Diesel in general, to the greats like Arnold or Stallone and their over-the-top big budget blockbuster exploits because of this… but I also kind of have to because every big budget actioner these days just has to be superhero by default.