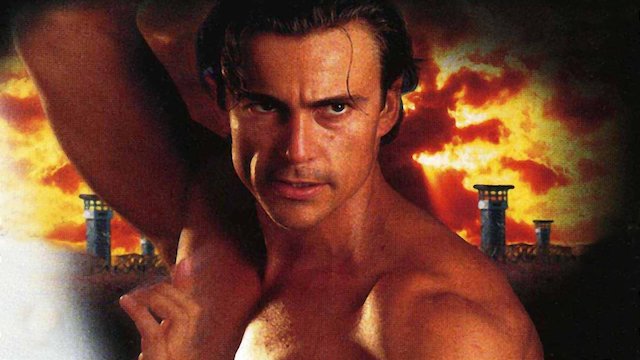 Van Damme would be proud of this final DTV Bloodsport sequel! 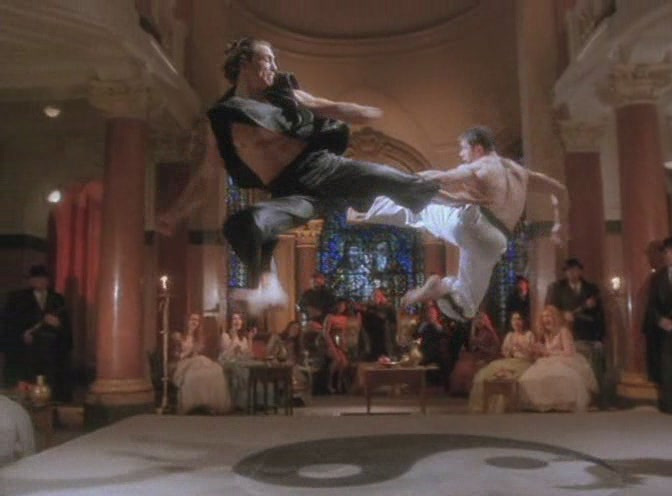 I am aware that I am on the opposite side from the majority on this one, but I am here to make a case for the fourth and final installment of the Bloodsport series, The Dark Kumite.

It is the 3rd Bloodsport entry to star Daniel Bernhardt, but one thing we can all agree on is that it is very different from the others, not to mention he plays an entirely different character.

I give them credit here, you can’t really top what was already done with the previous sequels, so they completely threw out the previous Bloodsport formula and made a uniquely dark, quirky, martial arts movie that is completely over the top.

When talking about Bloodsport 4, you can really split movie into 2 parts. The cop, prison first half of the movie and then the kumite tournament in the later parts. First things first…

The movie starts off by introducing Bernhardt’s character taking place in an underground fight. Why? I am not quite sure, as he is a cop as well. Still nice to see those signature Bernhardt kicks right out of the gate. The heart of the movie revolves around Bernhardt and his partner, played by his real life wife Lisa Stothard (Dumb and Dumber) and their long running pursuit of Schrek.

Yes the bad guy’s name is Schrek, but I can overlook that as he is played by the underrated Stefanos Miltsakakis, who was a good friend of Van Damme’s and was in several of his films; Cyborg, Maximum Risk, The Quest and Derailed, to name a few.

In Bloodsport 4 he is the main adversary and it Is nice to see him get an extended role to show off his many different styles of martial arts he is trained in. Anyway, they are able to apprehend him, but not before he kills another cop. Bernhardt ends up staging a scene where he makes it look like he kills 2 cops himself, making it look like he went crazy, just to get into this prison to find out about some shady things going on there and to go after Schrek as well. It just gets crazier from there…

The warden played by the hilarious Derek McGrath is in cahoots with an even crazier fight promoter named Caesar (Ivan Ivanov/The Hunt for Red October/Derailed) who uses prisoners for his own version of the kumite. The tournament doesn’t even really start until maybe the last half hour or so of the film, but we get some nice fights in the prison setting before that too.

The kumite itself isn’t as grand or memorable as the previous Bloodsport entries, but there are a few standout fights and fighters, along with Bernhardt and Miltsakakis, the other fighter I have to give a nod to is the imposing David Rowe (Champions/Overkill/Alien Resurrection).

The main climatic fight between Bernhardt and Miltsakakis is very solid and kind of brutal, as Miltsakakis is choking him out and Bernhardt ends up stabbing him in the neck with a pen! Blood gushing out, it leads Bernhardt’s line, “I seem to have lost my pen!”, and then with one final kick to finish him off. Yeah, we didn’t see anything like that in the other Bloodsport movies.

At a point earlier on In the film, Bernhardt’s character is thought to be dead by his cop partners on the outside. He was just drugged to be sent to where the kumite was held. So all the while Stothard is looking for him and it ends up with a final shootout with them and Caesar. Bernhardt and Stothard have good chemistry, she plays her role well and it adds a little something extra, knowing that this led to a long partnership in real life as they are still together to this day.

A Fitting DTV Ending for the Bloodsport Franchise 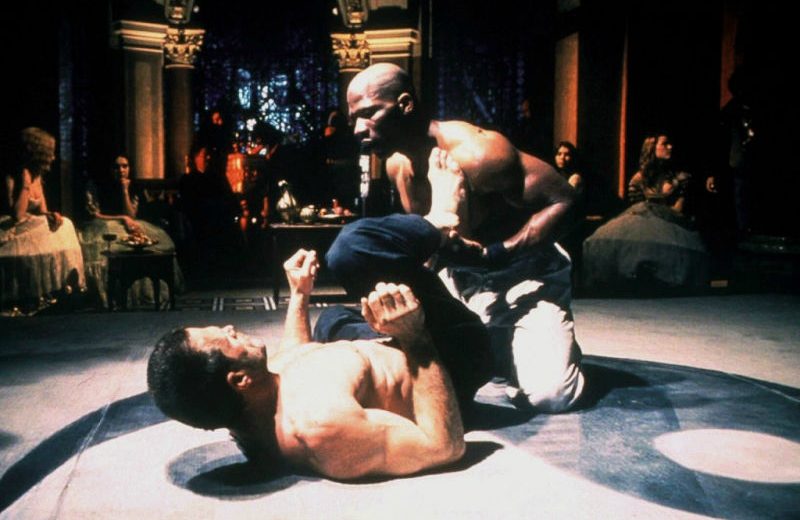 Some other interesting info on the production of this film, is that it was shot at a prison in Bulgaria, with real prisoners and guards being there while filming. The filming had to be delayed before they even got started, as someone escaped literally the day before.

This is far from my favorite Bernhardt movie (I look forward to bringing you my take on his other starring vehicles as well), but someone has to stand up for it!

Is this movie at times funny intentionally and unintentionally? Yes. Does it look like a lower budget affair than the previous entries? Sure. Does the rich kumite host look like an evil Benjamin Franklin? Accurate. But somehow, I still enjoy the hell out of The Dark Kumite, as it is fun and doesn’t try to be anything that it’s not. It delivers what you want in a prison-martial-arts-tournament film.

We really don’t get enough of these kinds of martial arts movies these days, so going back and diving into that golden era of DTV (direct to video) cinema is something I absolutely love. Bernhardt was such an underrated talent as a lead – admittedly I might be biased here, as I could watch him in anything. Even going up against cyborgs and dinosaurs, more on that later.