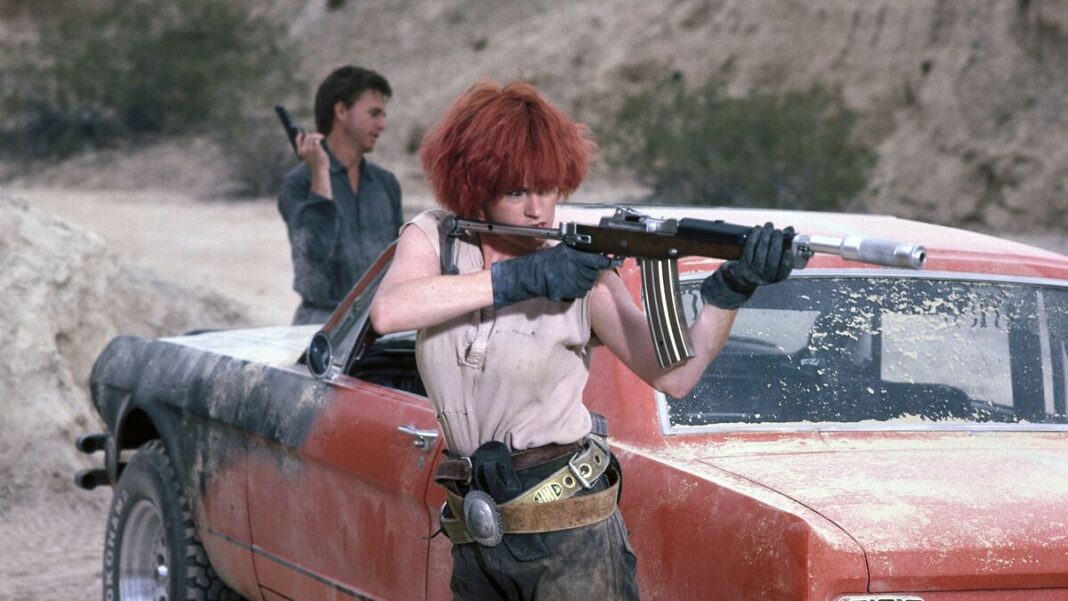 A look back at how Cherry 2000 balanced camp and ultimate action.

Director Steve de Jarnatt is best known for his masterpiece Miracle Mile, a bizarre and enchanting journey through Los Angeles at the advent of a nuclear war. The year before (1987) he made Cherry 2000 that also delivered the goods on the action and humor front. The 1980s were a great decade for goofy and action-packed Sci-Fi comedies. These days, we can only wish that studios would put 10 million dollars on the table for a film that is a crazy and inventive as Cherry 2000, so let’s jump back to this good old time and have a look at it

In the near future, US society has collapsed, except for a few big cities. Anaheim is one of them, where Sam (David Andrews) lives and sleeps with his android Cherry, that one day breaks after some soapy foreplay. Sam refuses to part ways with his beloved sex robot, and seeks out tracker Edith “E” Johnson (Melanie Griffith) to help him find a replacement in the scrapyard of Zone 7, a part of the wasteland that is ruled by the tyrannical Lester (Tim Thomerson) and his gang.

Everything that’s grim in your typical post-apocalyptic tale is fun in Cherry 2000, and despite the seemingly dire circumstances everybody seems to be enjoying themselves. The wasteland looks like Las Vegas exploded and its remains rained down everywhere, giving us plenty of colorful kitschy decorations, furniture, and fashion to marvel at! The plot moves from one eccentric set piece to the next, introducing us to many quirky characters and their slightly absurd utterances.

Writers Lloyd Fonvielle and Michael Almereyda also added some social commentary to the script that never drags down the upbeat vibe, though. Sex robots that imitate human behavior don’t exist, but we may be getting there, and there are the bizarre stories of people living with their sex doll as if they were their girlfriend. As if this escalation of romantic and sexual alienation was not bad enough, one-night stands are negotiated by lawyers in night clubs. And recycling being heralded as the key technology to turn things around for society pokes fun at our arguably obsessive relationship with recycling that has existed since several decades, which seems to enable many people to live with a clean conscience while engaging in plenty of otherwise wasteful behavior.

The movie introduces many odd characters, including our two leads. Melanie Griffith as E sports the look of a tough action hero with flaming red hair and an outfit that is equal parts pirate and gunslinger. But her attitude couldn’t be farther away from your typical Max Rockatansky impression: she speaks with a gentle voice, and also frequently seems to be daydreaming. When driving through a pitch-black night with the car lights off, Sam asks her: “How can you see?” Her answer: ”I drive by feel, mostly”.

Same goes for Sam who never seems to get worked up about anything, and passes through even the most dangerous situations with a nonchalance that borders on apathy. Both of them are extremely likable characters, and just like the whole film devoid of the usual cynicism found in most action films of the 1980s. Tim Thomerson is awesome as always as nutty leader of a cultist gang whose members are immediately recognizable by their hawaii shirts and bazookas.

The Wasteland Has Never Been so Much Fun!

E and Sam cruise through the desert in an old Mustang, and thanks to a whole bunch of unfriendly encounters there’s lots blasting, explosions and cool stunts along the way. The action highlight of the film is the legendary car dangling scene where our two heroes are first fighting off Lester’s minions hundreds of feet above ground, with the car being lowered afterwards in a death-defying stunt into a water tunnel of the Hoover dam. Cheery 2000 is worth a watch for this sequence alone, even though to this day I still don’t understand what’s really happening there.

There’s also a lot of fun to be had with rocket launcher shootouts, and E even blows up a whole plateau in the desert. I’m not sure how they pulled that off without bribing a whole squad of park rangers. Some sequences also feel like they are parodying action film conventions, such as when Griffith regularly gently and slowly moves into tough poses when getting ready to shoot. She also delivers lots of tough talk with the softest of voices, and both E. and Sam are almost casually handling all the mayhem around them. But none of this ever turns the film spoof.

Cherry 2000 is an ultimate embodiment of the fun side of 1980s cinema, and delivers campy excitement all the way. De Jarnatt’s genius gave us an upbeat trip through the wasteland, and E’s sweatshirt with the print “Dignity” should be compulsorily worn by every member of the human race.