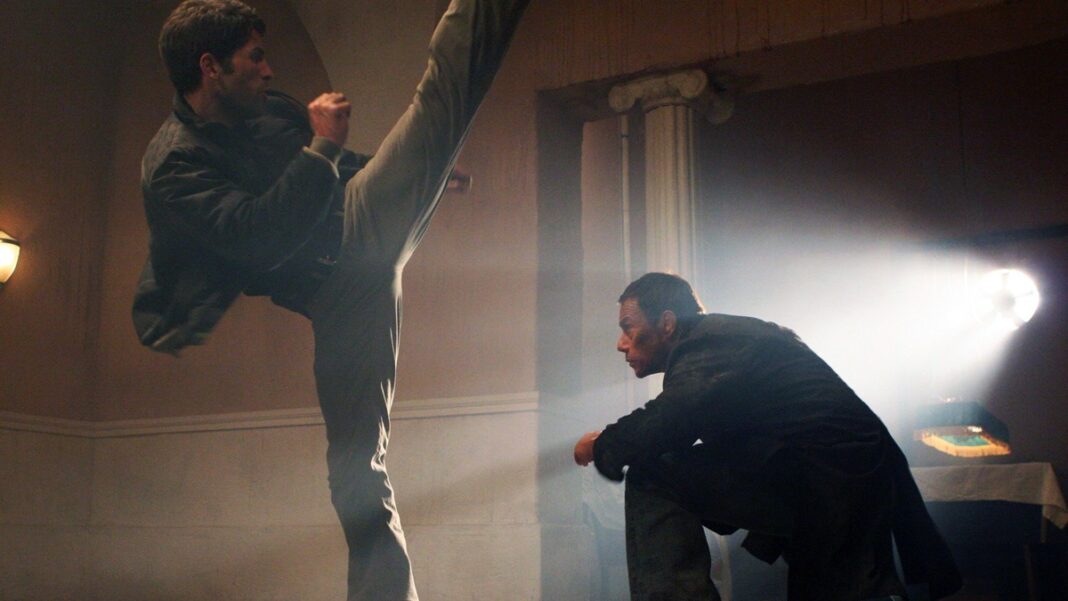 Two of the biggest names in ultimate action movie history fight it out in the same flick.

In 2008, Van Damme received much acclaim for his striking performance in JCVD, but in the same year he also made the old-school action banger The Shepherd. Martial arts action grandmaster Isaac Florentine directed, and he brought rising Scott Adkins with him. So let’s check out what the combined power of these action heavyweights did for The Shepherd!

New Orleans cop Jack Robideaux (Van Damme) joins the Border Patrol in a small town close to the Mexican border. He arrives not a day too late, as a crew of ex-Navy Seals is running a smuggling operation (among them Scott Adkins as Karp), and the over-strained police department is in dire need of a couple of extra fists for Lady Justice.

The story never goes beyond what we have been served in DTV actioners since the 1980s. The first half is a bit slow, with the usual introduction of the characters and their relationships. It’s all entertaining enough, though, and the occasional humor also helps. Robideaux’ rabbit that he carries with him almost everywhere while he is in town becomes a nice running gag.

Don’t Get Between a Man And His Rabbit

The film has a down-to-earth look, there are no huge set pieces, but nothing looks cheap. Florentine created a consistent tone and visual style, and succeeded in putting together a competent production. Van Damme also shows that he has come a long way as an actor, and does a good job with his somewhat melancholic character that has a tragic past.

After 45 minutes things really get going when the villains dress up as priests and go on a pilgrimage across the border. Passport control doesn’t go as planned, though, and their coach rapidly transforms into a war rig stacked with MGs. After this great episode of mayhem, it’s non-stop showdown time.

Florentine handles the action very well as usual, even though it is a bit more grounded compared to his greatest excesses, and the film keeps a sense of realism for the largest part. That means no over-the-top martial arts moves, wild camera zooms and swooshing sounds time, but the action sequences are still filmed perfectly dynamic and powerful.

I Need Backup Right Away, And it’s the Kind That Comes With Guns

Adkins shows repeatedly why he would become the only worthy successor to the action heroes of the old days. He is not given much opportunity to shine as an actor, but at least he totally owns his malignant character. And he does a couple of insane fights with flips, jumps and hits of almost uncanny intensity.

Van Damme also shows us why he is a legend, and delivers some cool moves with his best physical performance since the 1990s. Florentine gives both of them plenty of opportunity to do their share of roundhousing until the inevitable showdown between them, that marks a worthy climax of the film.

The Shepherd leaves nothing to be desired for fans of old-school action flicks. The first clash between Jean-Claude Van Damme and Scott Adkins on screen gave us an explosive package that is definitely worth remembering.