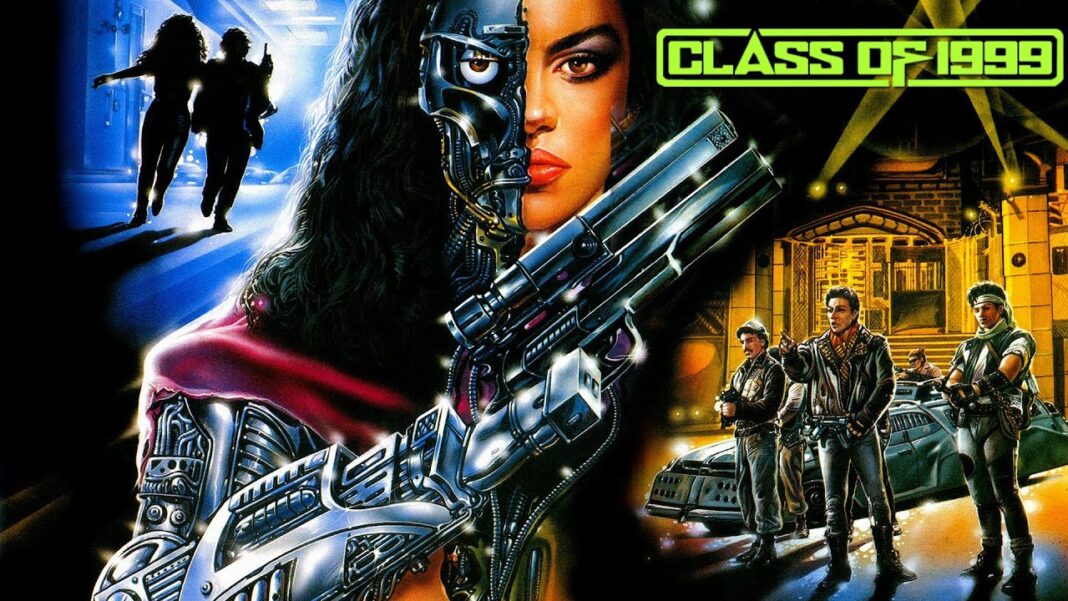 A look back at this under-appreciated ’90s ultimate action gem. 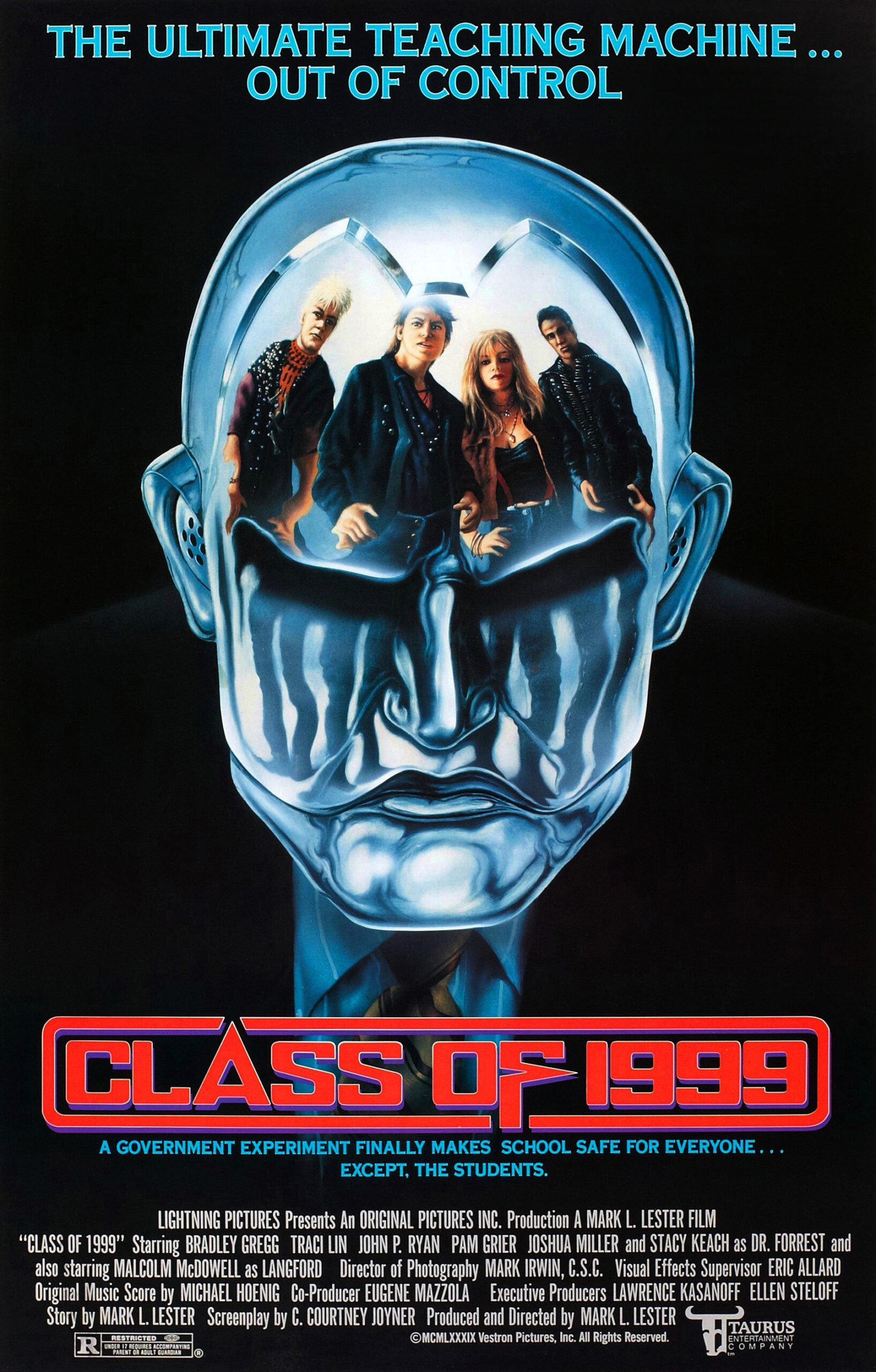 Mark L. Lester became a renowned name in the action genre with classics like Commando and Showdown in Little Tokyo, but his first big hit was the exploitation cult flick Class of 1984 about a deranged high-school gang. In 1990, he looked fifteen years ahead, and delivered Class of 1999, the sequel (in name only) to Class of 1984. Things have gotten a lot worse in the time that passed, and discipline at school can only be restored by merciless cyborg teachers!

In the future, parts of the country have become lawless zones ruled by gangs. Cody is released from jail on probation, and goes back to his high school that is located in such a “free-fire” zone. At the same time, the school board deploys three android teachers to restore order. Their hard-line attitude initially seems to work, but when their old military program is reactivated and they start killing students, Cody and his fellow students fight back.

I Operate From a Model of Absolute Zero Tolerance

In the future, juveniles spend their time in violent gangs, carrying weapons and do heavy drugs, but   they still have been raised well enough to attend school. On top of that, police dare not enter the high-school grounds. None of these are realistic assumptions but it’s a great fantasy scenario, and there are even prison cells for students on campus!

The interaction between the teenage gang members is exactly as we would expect when you’re in puberty and grow up in anarchy: hysterical and violent. On the other side, we have the Tactical Education Units (the teachers). Patrick Kilpatrick, John P. Ryan and Pam Grier nail their roles as reprogrammed killing machines that enjoy themselves by dealing out corporal punishment. Stacy Keach shows up as head of the research division that oversees the field trial of the teachers. He sports the outfit of the year with a white mullet, white coat and white contact lenses (but a black beard)!

A Wild Mash-Up of The Terminator, Escape From New York and The Principal 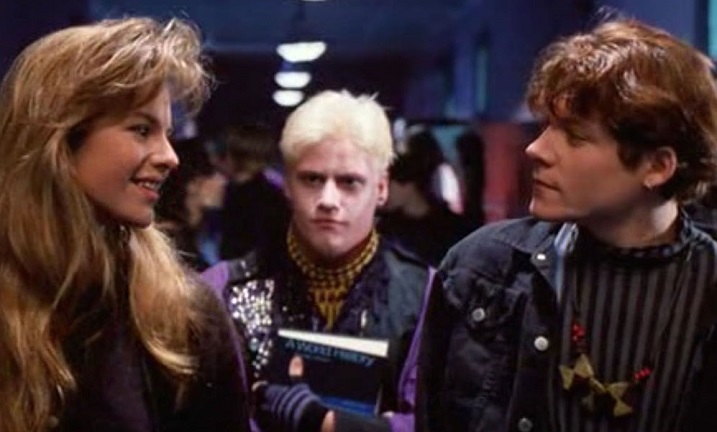 The acting is hammy by everyone, but the dialogues are actually not that bad. They also come with the occasional humor to remind us that this film is meant to be fun. The robot teacher’s kitchen shelves are stacked with WD-40, and Cody needs to show exemption papers for his shrapnel wound to get through the metal detector in front of his school. Lots of care was taken with the set design, and the run-down urban alleys and Mad-Max-style armored cars create a proper dystopic vibe. The costumes are also great, and the worst fashion offenses of the 1980s make a glorious comeback at the dawn of the new century.

The film never dwells on a plot point for more than two minutes, which helps to keep things moving at a swift fast pace. The first half establishes the characters and already delivers a few well-dosed action moments. When the teachers declare war on the entire student population in the second half, Lester does what he does best, and fills the screen with spectacle. He captures the action sequences smoothly and efficiently, and the camera always aims for maximum mayhem. The action crew delivers a pyrotechnics feast with explosion after explosion after explosion, non-stop gunfire , and a good deal of gory kills.

Learn, or be Killed! 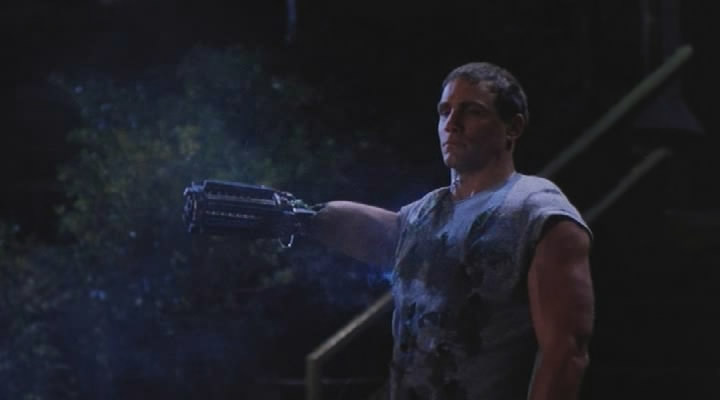 Lots of work and creativity went into the practical special effects of the cyborgs. Their transformation to weaponized cyborgs comes with some gooey side effects and looks pretty bad-ass. The three killing machines each have their own perk, such as a flame thrower arm, or a sophisticated claw/drilling machine combo.

Lester’s Class of 1990 is a wild mash-up of The Terminator, Escape from New York and The Principal, that rivals it’s A-list action peers of the time. There is no deeper moral or even anything resembling a message, this film is all about escapist fun and violent carnage. It’s everything we could ever want from an action flick, and also a great recommendation to watch for every stressed out teacher!