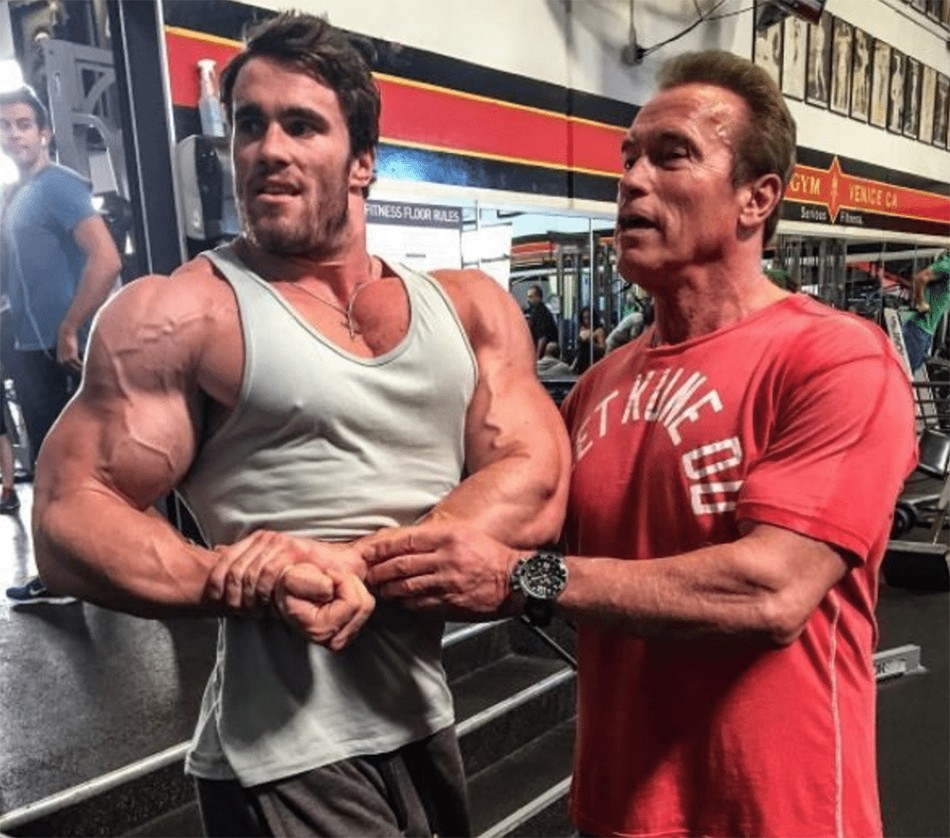 Arnold Schwarzenegger’s legacy will live on as Calum Von Moger in Bigger (2018).

Arnold Schwarzenegger’s ascent from bodybuilder to one of the biggest stars in the world is being chronicled in a new movie – and they’ve found the perfect guy to play Arnie. Bigger stars Tyler Hoechlin and Aneurin Barnard as brothers Joe and Ben Weider, the men who discovered and helped make Schwarzenegger the household name he is today.

The new film, directed by George Gallo, focuses on the Weider brothers and the story of how they were able to create a business empire from nothing, while facing abject poverty and anti-Semitism.

Hoeclin, who is known for his work on Teen Wolf and Supergirl takes centre stage as Joe, the former bodybuilder and co-founder of the International Federation of BodyBuilders (IFBB).

Joe and Ben would go on to create the Mr. Olympia contest that made Schwarzenegger famous and went on to publish several bodybuilding and fitness magazines including Muscle & Fitness, Flex, Men’s Fitness and Shape.

excited to be in Vegas for the U.S premier of the #Bigger movie tomorrow! Can’t wait to share with you the story that turned bodybuilding into the sport it is today. I was excited when producer Steve Jones called me in Jan 2017 and asked me to play the role of #ArnoldSchwarzenegger. A role that came very natural to me as I looked up to him from day 1 when I first started lifting weights. October 12th 💪 Save the date and get ready for the incredible story of Joe & Ben Weider. The brothers who turned the fitness industry into what is is today.

However, it’s real-life Australian bodybuilder Calum Von Moger who has grabbed the headlines around Bigger so far. Cast in the role of the young Schwarzenegger, he certainly possesses the necessary muscle power, and undoubtedly bears a passing resemblance to the man himself.

Von Moger doesn’t have much in the way of experience when it comes to film work. He appeared in the bodybuilding documentary Generation Iron 2 prior to landing the part of the Young Arnie.

Who’s a part of the filthy pump gang? Get ya stringer and pump on at teamvonmoger.com 💪#catchyalater #filthypumpgang

The Australian is a popular figure on social media though, with an impressive 2.8 million followers on Instagram alone. You can check his Instagram page here, or read up more about him on his personal website or Youtube channel.


Let us know your thoughts on Calum Von Moger as Young Arnie in Bigger in the comments or on our Facebook page!