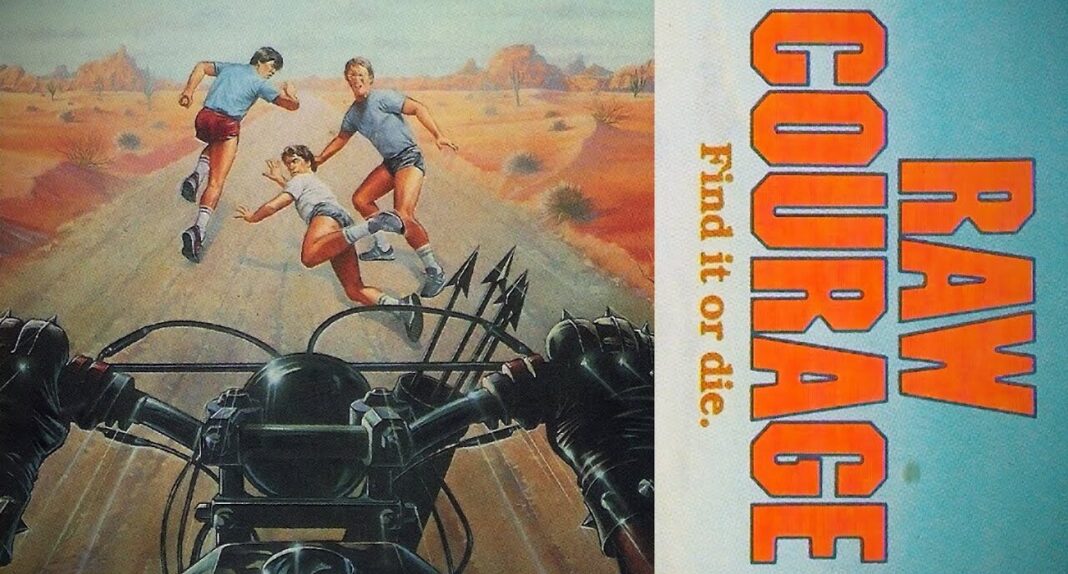 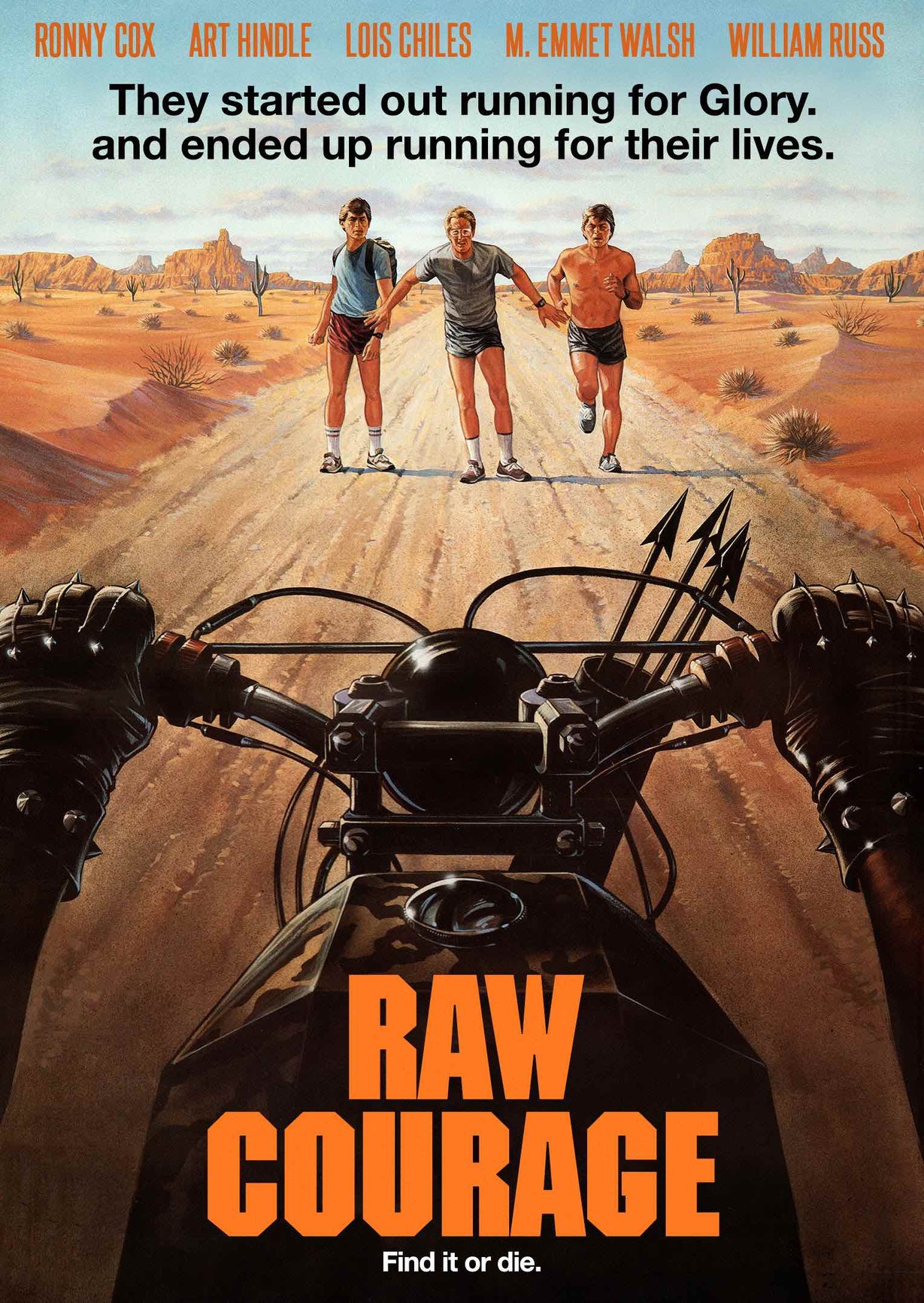 Ronny Cox had a dream. He envisioned a movie made on his terms, from screenplay to production. He was going to film it near his hometown in New Mexico with his co-writer wife by his side and a faithful crew ready to carry out his creative vision. Ronny had the opportunity to shoot his shot in 1984 and Raw Courage was the resulting airball. The thriller/action B-movie failed to find distribution and its audience. Ronny went back to acting, delivering excellent performances in such action classics as Beverly Hills Cop, Robocop, Total Recall, and, well, the first Captain America movie.

The time has come to establish a legacy for this forgotten action flick. A recently restored Blu-Ray transfer heightens the sweat-stained, raw survivalist thrills of a group of unsuspecting yuppie runners who are pitted against a platoon of witless militia dirt-bikers.

If that story concept doesn’t kick-start your interest, I don’t know what will. An unlikely trio of ultra-marathoners set out on a two-day, 72-mile run across the desert outside of Las Cruces, New Mexico, which is part of the town’s annual Pioneer Days festival. Not sure how that’s supposed to rev people’s engines but sure, run for the glory and the Land of Enchantment.

Ronny’s Pete is the older and timid one, Roger (Art Hindle) is the well-to-do playboy professor, and Craig (Tim Maier) is the young naïve college guy. Their commemorative cross-country excursion is interrupted by a shiftless militia group, led by legendary character actor M. Emmet Walsh, that’s training in the middle of nowhere. The milquetoast militants have their own problems but they are agitated and ready to rumble. What starts as an awkward encounter ends in murder and mayhem under a hot desert sun. 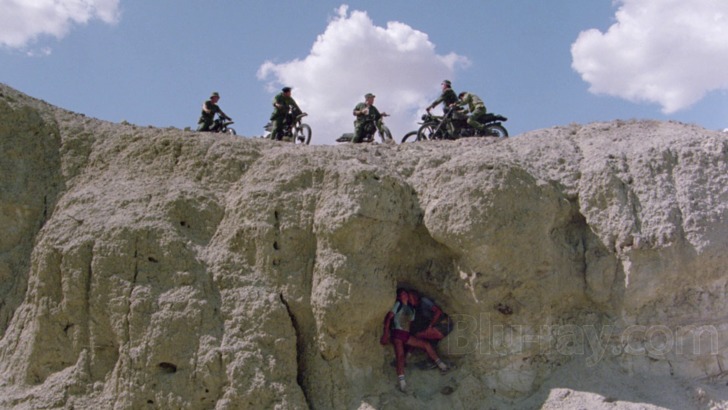 The biggest hurdle the casually astute viewer has to jump over is believing that a southwestern militia group lacks firearms and a cache of improvised explosive devices. What they do have are dirt bikes, some knives, and makeshift medieval projectiles. If you can clear that narrative obstacle, then you can really find enjoyment out of three tactically inexperienced schmo’s trying to outlast and outmaneuver a gang of deluded assholes hell-bent on covering their tracks after a bullying session goes wrong.

Despite a few flaws, Ronny’s script sets up desperate situations where you legitimately wonder, how the hell are they going to get out of this situation? Our protagonist pedestrians have already humped a dozen miles through some unforgiving terrain and now a hoard of vengeful rednecks are on their heels. Ronny and the varsity track-and-fielder manage to pick a few goons off with some heavy rocks, an assortment of sticks, and an audience-pleasing impaling. The action, chase scenes, and motorcycle stunts work well, which are greatly enhanced by the dirt, sweat, blood and grime that the characters are flung into throughout the movie.

This raw, minimalist action is reminiscent of First Blood with a touch of Deliverance, which really puts the audience in a survival mindset. We feel the exhaustion, dehydration, and constant pain resulting from the unceasing onslaught. The injuries, however minor, have consequences. The environment is a formidable foe both in terms of story and filming as they shot in Las Cruces, New Mexico… in August, when it’s 114 degrees.

The action may not be as spectacular as the traditional 80’s blockbuster fair but the authenticity makes up for it. Pete has to think on his feet, choose his battles wisely, and use whatever is at hand to defend his comrades. They make mistakes out of inexperience and the characters are allowed to fail then learn how to recover. If you’re a runner or have ever ventured out on a long overnight hike, you’ll relate to these themes and struggle along with the characters. You’re put right into their shoes and manny-panties. 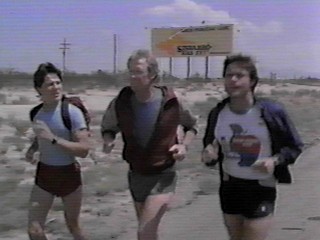 In an interview included with the Blu-Ray release, Ronny Cox has a professionally measured demeanor but you can tell how disappointed he was with the production. He really wanted to direct but thought he’d be overextending himself. He didn’t want to interfere with director Robert Rosen’s creative decision-making out of professional courtesy. Raw Courage is Mr. Rosen’s only credit as a director and given Ronny’s account and what we see in the final product, it’s easy to see why. Look no further than the opening scene where Ronny slowly slathers on a thick layer of Vaseline all over his toes. The up close and personal shots of slimy feet are off-putting and would even make Tarantino blush.

Ronny’s co-producer, Sandy Howard, also had disagreements about the movie’s direction, which were so bad that he and Rosen had to settle their differences in arbitration. Over what, Ronny doesn’t say. The combination of Ronny’s inexperience as a writer and producer along with a seemingly intransigent first-time director prevented Raw Courage from achieving mainstream status.

Also as a musician, Ronny was just about horrified at the made-for-80s-TV synth score that sounded like it was made on the Casio keyboard I had when I was nine. Yes, it’s pretty bland, and I tend to like B-movie synth soundtracks from that era. Ronny dreamt of a Jerry Goldsmith score (he did the original Trek and Next Gen movies, Rambo movies, The Mummy, countless others) but he couldn’t pony up the fifty grand to get the job done. 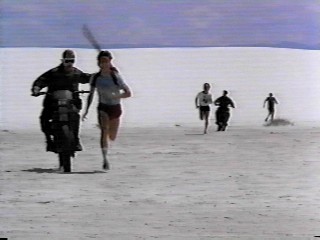 Budget and production issues torpedoed this movie before it had a chance to set sail on its own. But watching it now, without the baggage and as a lover of 80s action, it’s a refreshing take on the genre. It may be alternately titled as simply “Courage” on some releases but “Raw Courage” is much more fitting and it’s what makes the film endearing. The grit, resolve, and the love that went into making this film are translated on screen. For that, I en-“courage” you to pick up a copy (it’s Father’s Day and that’s clearly a Dad pun).

In 2019, Scorpion Releasing saved Raw Courage from obscurity and released a high definition cut of Raw Courage along with that telling interview with its star, writer, and co-producer Ronny Cox. The southwestern scenery and cinematography are gorgeous and only a few imperfections, specifically with the audio, are noticeable here and there. Kino Lorber also distributes the Blu-Ray edition and I picked it up for cheap on one of their recent sales. Find it where you can and think twice about your next cross-country jog through right-wing militia country.