Arguing about which Martial Arts style would win in a fight to the death was an essential part of my childhood. Kung Fu was the obvious choice if Bruce Lee flicks were anything to go by, but Mike Tyson was a veritable killing machine so Boxing couldn’t be discounted.

Chuck Norris proved that Karate was nothing to be trifled with and there was also that weird Aikido thing Steven Seagal was known for. Realistically though, it wasn’t until I was in my early teens and I came across tapes of the original no-holds-barred UFC I realised I was completely off track (the dude in the pyjamas won again?).

Until that time, my source of knowledge for which was the ultimate martial arts style came from B-grade action flicks. The 90’s had no shortage of movies featuring different styles battling it out but few were quite as gruesome or entertaining as Patrick Alan’s 1993 gem, Shootfighter: Fight to the Death.

The film opens in Hong Kong with two fighters duking it out in an underground fighting den. This is shootfighting, a no-holds-barred martial art where honor and respect amongst fighters is paramount. Everyone is there for one thing – to prove their worth for a chance to fight shootfighting legend Shingo (Bolo Yeung). As Shingo and the crowd watches on, one of the combatants gets a little too excited and defeats his opponent… by tearing his throat out (there’s that gruesomeness I was talking about). This act of disrespect displeases Shingo and the shootfighting gods so the offender, Mr. Lee (Martin Kove, although you’ll probably recognise him as the evil Cobra Kai Sensei from Karate Kid), is promptly disqualified and disgraced. But that’s not all. He’s also banned from ever fighting in Hong Kong again, and as a result, from fighting Shingo. 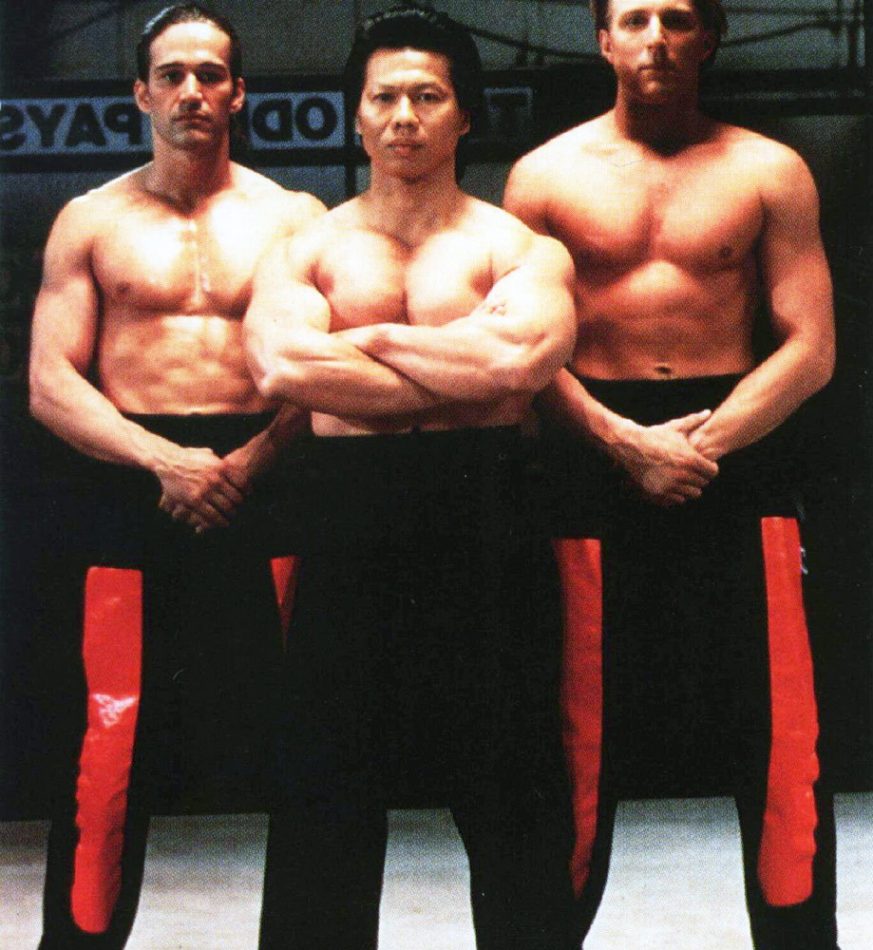 Some years go by and Shingo, no longer a hulking cage fighter, is now a hulking martial arts instructor in America. His most promising student is Reuban, a young and naïve Karate school owner played by none other than William Zabka (Karate Kid’s resident badass Johnny Lawrence). But Reuban’s in a pickle.

He owes money to some loan sharks and he’s having trouble paying it back. Cue the return of Mr Lee. After being banned from shootfighting in Japan he did what any budding entrepreneur would: set up a rival shootfighting league in Mexico. He recruits Reuban and his pal Nick to fight in the league under the pretext of earning big bucks, but really, Lee is using the boys to lure Shingo back to the ring for one final fight.

Reuban readily accepts the offer, thrilled to be able to pay his debt back and get a bit of an adrenaline rush at the same time. At first it’s all rosy. Reuban and Nick win a few fights, earn some money and have a good time. Soon enough however Nick realizes something’s amiss and bails. Reuban sticks around and reaches the finals where the true nature of shootfighting emerges. Not only must he now use weapons in the ring, but instead of just defeating his opponent, he’s required to kill them. Luckily for Reuban, Nick has spilled the beans to Shingo and now it’s a race against time for him to rescue the boys and return to the ring to face his arch rival one last time.

In the years since its release Shootfighter has become a cult classic amongst martial arts fans, and for good reason. First and foremost, the film in its uncut form (if you’re lucky enough to find it) has enough bloodshed to rival splatter films of the 80’s. Bones are broken, throats are slashed and blood is spilt in earnest. It’s not quite at Riki-Oh levels, but it’s certainly not something you regularly see in a martial arts film.

It also has the honour of being one of the few films to feature Bolo Yeung as a good guy, and despite having few lines in the film the big fella has a definite presence. As already mentioned, it also reunites the original Karate Kid antagonist William Zabka with his evil Cobra Kai sensei John Kreese which helps up the nostalgia factor. Both give good performances and it’s interesting to note that Zabka kept up with his martial arts training since Karate Kid and it’s evident in his fights. Overall the fight scenes come thick and fast and most are enjoyable if a bit on the bloody side. There’s also an obligatory training montage or two to keep you interested.

Finally, eagle-eyed viewers will also notice a familiar face in the opening fight scene, none other than Joe Son. For the uninitiated, Joe Son is a former MMA fighter, most notable for losing his first UFC match to Keith ‘The Giant Slayer’ Hackney after copping a series of eye watering punches right in the crown jewels. Unfortunately, outside the ring Joe wasn’t exactly a model citizen, I won’t go into details but if you’re up for it his Wikipedia page makes for an interesting and disturbing read.

All up, Shootfighter: Fight to the Death definitely deserves its place as an Ultimate Action Movie. It didn’t help 13 year old me determine which was the ultimate martial arts style but it certainly got a workout in my VCR. Best of all, there’s a sequel!


Article by Chris Z – let us know in the comments!