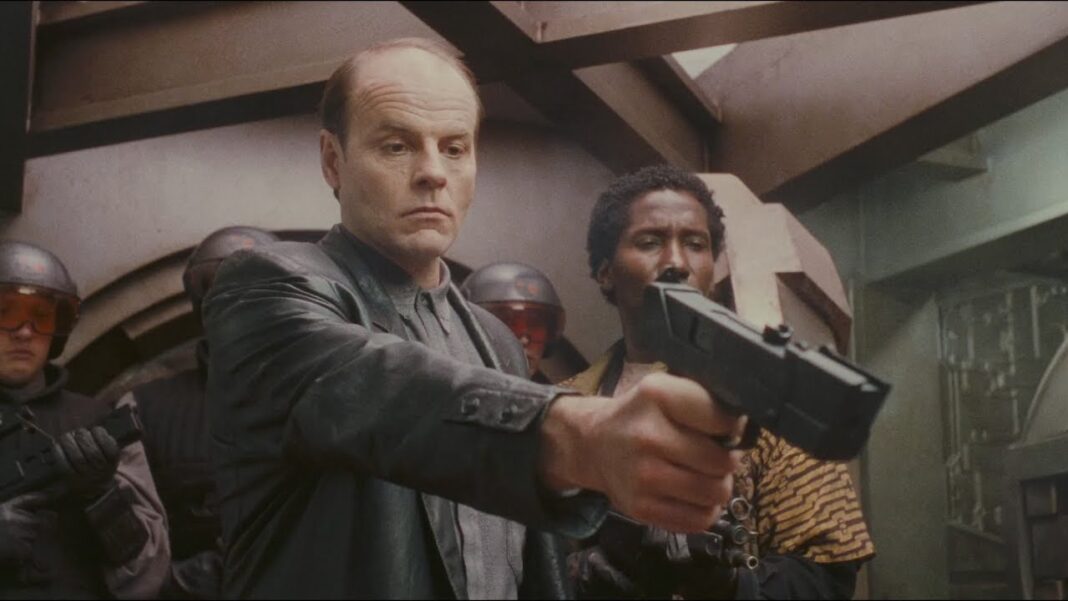 Ranking the best movies from the great Michael Ironside! 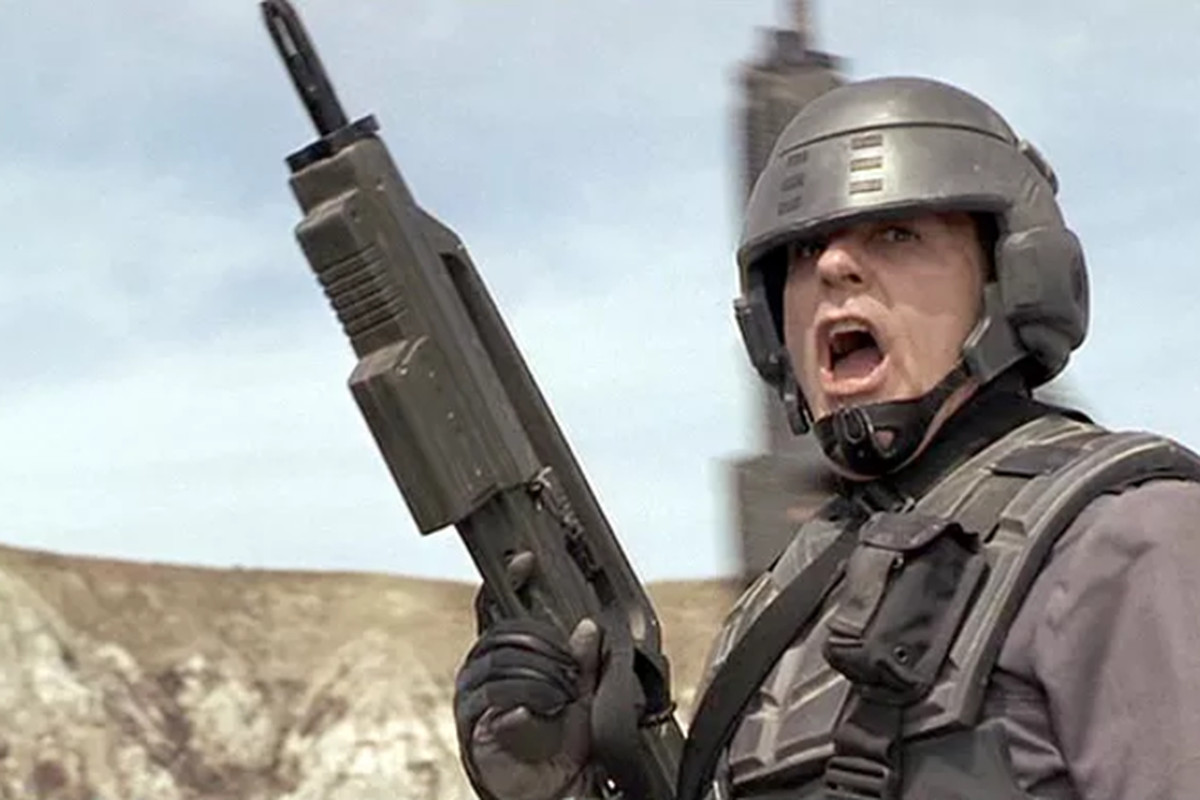 Michael Ironside can proudly look back on a decades-long career in which he contributed to many action masterpieces. The Canadian actor is mostly known for his supporting roles, first and foremost his portrayals of villain characters. Nobody can clench his teeth better than Ironside, and his growling voice and commanding physique often made him an intimidating presence. With this article, we’ll try to honor his work and present you his best 10 films in the action genre!

Beside high-profile actioners, Ironside also starred in numerous low-budget productions, and Forced to Kill may be the most entertaining from that segment in his oeuvre. Repo man Johnny gets abducted by a crazy family while on a job in a rural area. They notice his martial arts skills and force him to partake in an illegal fight tournament. Distributed by PM Entertainment, Forced to Kill is  a sleazy action-drama that feels like a blend of Bloodsport and The Texas Chainsaw Massacre at times.

Johnny is being simultaneously tortured and trained, an unorthodox approach that actually works, however. The corrupt Sheriff Wilson (Ironside) is orchestrating the whole endeavor, and Ironside seems to be thoroughly enjoying himself as sadistic and bloodthirsty villain, creating many moments of malice throughout the film. Forced To Kill is not peak PM Entertainment, but there’s enough fights, car crashes, and even a boat and helicopter chase to make it an entertaining affair.

McBain is an action inferno from exploitation specialist James Glickenhaus that mops up all the clichés from 1980s Cannon flicks and molds them into a totally brainless spectacle.  The films centers around the crusade of Bobby McBain (Christopher Walken) and his band of Vietnam veterans (among them Michael Ironside) against Colombian dictator El Presidente, after he killed one of their old comrades and starts to wage war against the local resistance. Who knows how Glickenhaus lured Walken into this project, but Ironside seems to feel at home immediately as slightly lunatic veteran Frank, who now lives the good life of a weapons dealer.

When McBain asks him to supply equipment for the resistance, he joins their noble cause, but still takes 10 million USD from McBain for his support. Happy to get back in action, he puts on his most colorful Hawaii shirt, and McBain’s private war feels like a tropical vacation for him. A great cast, corny humor and generic, but impressive action sequences with giant explosions and an enormous body count make McBain a highlight of B-action cinema.

McBain: Everything We Love About 80s Action Rolled into One Film

Thanks to his snarling voice, Ironside also collected credits as voice actor for animated series and video games, and for action fans the sequel to the 1980s cult classic Heavy Metal may be his most work. Miner Tyler is transformed into a power-hungry tyrant after being exposed to a mysterious rock. He raids a space colony and takes the girl Kerrie hostage. He didn’t count on Kerrie’s sister Julie, though, who is blasting her way through the galaxy to take down Tyler.

Lizard people, techno wizards and space battles, the film is a nice amalgam of animated Sci-Fi pulp with over-the-top violence and plenty of nudity. Ironside lends his voice to Tyler, a bloodthirsty psychopath, who leads a gang of deranged space mercenaries that are killing and raping their way through the galaxy. Heavy Metal 2000 is nowhere near as good as the original but still solid entertainment for everyone who thinks gore and sex are essential ingredients for an action film.

Ironside can pride himself with starring in one of the penultimate 1980s movies, even if it’s only a minor supporting role. Top Gun is an action drama of the highest caliber, that shows us the daily life and troubles of the elite US Navy pilots at the TOPGUN academy, a film that cemented the superstardom status of Tom Cruise and Val Kilmer.

Ironside’s Jester is a no-nonsense military instructor who wants to bring out the best from his students. His blunt approach turns out not to be the best way to straighten out the “wild card” Maverick, though. Top Gun has the perfect recipe, a bunch of cocky testosterone-laden cadets clashing with each other, and some of the most ultimate air combat action to ever make it onto celluloid!

6) Spacehunter: Adventures in the Forbidden Zone (1983)

This space action-comedy follows in the footsteps of Flash Gordon, but features a slightly post-apocalyptic vibe instead, and almost non-stop action! Three women crash on a contaminated planet and are captured by the mutant minions of the deranged cyborg Overlord. It’s up to bounty hunter Wolff and his companions to rescue them.

An almost unrecognizable Michael Ironside is the flamboyant master villain Overlord, a cyborg tyrant whose torso is welded to a moving crane, and who has two enormous claws that shoot fireballs! Spacehunter features great set and vehicle designs and plenty of goofy action sequences, it’s a great adventure through the wasteland for the whole family!

One may not expect Highlander 2 to show up on any list other than at the top of a worst sequel ranking, but this time, we’ll make an exception. The film has to endure the reputation of the most terrible sequel to an action film to this day, and it’s probably justified. In the original cut of the film, the immortals are from planet Zeist, waging war against each other. Connor MacLeod and Ramirez are banished to earth after being defeated by general Katana. Not happy with their survival, Katana decides to pay earth a visit.

Christopher Lambert sleepwalks through the film and Sean Connery shows up in a few pointless scenes. Only Michael Ironside as Katana gives it all, and his enthusiastic performance is one of the few positive things to be said about the film. Ironside was not blessed with a lot of hair, but his Katana sports an enormous mane. He wears the fashionable combination of a trench coat and medieval armor, plus a big-ass extendable sword. This diabolic hooligan wreaks havoc as soon as he arrives on earth, such as overcharging and crashing a subway train just because it’s fun.

Turbo Kid is a charming ode to post-apocalyptic cinema and 1980s pop culture. The Kid scavenges the ruins of civilization on his BMX bike. He finds the power glove of the mythical soldier Turbo Rider, and takes it up against the ruler of the wasteland, Zeus.  The film is just as much parody as it is an homage, and is right up there with other masterpieces such as Kung Fury and Commando Ninja.

It is not just cramming as much tropes and references as possible into its runtime, but tells a story full of heart, humor and gory action, all accompanied by a fantastic Synthwave soundtrack. Ironside shines in his role as tyrant Zeus. Just like everyone in the film he hams it up terrifically, and gets awesome lines such as “I like blades! I like fire! I like blades and fire!“

The story about the interplanetary war of an earthly military dictatorship against the alien race of the bugs is the darkest of satires, that cleverly embeds its message between ultra-gory action sequences,  and soap-opera characters and dialogues. It’s another masterpiece from Paul Verhoeven, and after already working together with Ironside for Total Recall, he cast him in another bad-ass role.

His Rasczak is a high-school teacher who fervently indoctrinates his students to join the war and hate the bugs. After Johnny Rico and his friends sign up for their first campaign, they are surprised to see Rasczak return as leader of the Roughnecks infantry squad. He also gets the best lines of the film such as: “Come on you apes, you want to live forever?”

Walter Hill graced action fans with many masterpieces, and his modern Western Extreme Prejudice is no exception. A border town is plagued by drug traffickers from Mexico, and a violent triangle is created between Jack Benteen (Nick Nolte) and his Texas Rangers, the drug cartel led by the charismatic Cash Bailey (Power Boothe), and an undercover government task force.

A dream cast brings their unhinged macho characters to life: Nick Nolte, Powers Boothe, Clancy Brown and William Forsythe, it’s the ultimate assembly of character actors. And of course there is Michael Ironside as resolute leader of the Zombie unit, a special task force composed of operatives who are all presumed dead. Extreme Prejudice is a mean film with tight direction by Hill, belligerent exchanges between the protagonists and frequent eruptions of bloody violence; an absolute 1980s action thriller classic!

Total Recall is one of the ultimate Sci-Fi action bangers, and the villain team has a huge contribution to why this film is so awesome. Douglas Quaid (Arnold Schwarzenegger) seeks to spice up his life, and visits the Rekall Corporation to have the fake memory of a secret agent implanted into his mind. From that point on, he finds himself caught in a violent conspiracy, and ends up supporting a rebel insurgency on Mars against the tyrannical regime of Vilos Cohaagen.

Technically Coohagen is the evil head honcho, but Ironside’s Richter does all the dirty field work, and he and his crew make life a living hell for Quaid, chasing him over two planets. Richter is ruthless and cynical, always one step behind Quaid, and barely able to suppress his constant anger. Ironside gives us the evil stare and teeth clenching at its best, making Richter one of the best movie villains of all time!