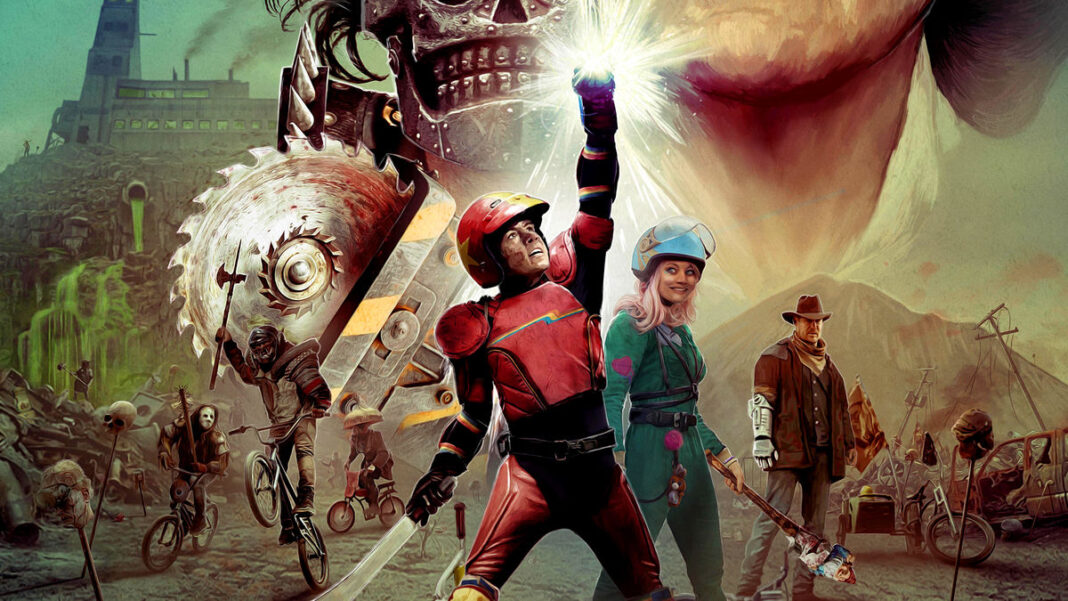 A look back at how Turbo Kid explores the child-like appeal of bloody action and ultimate hyper-violence. 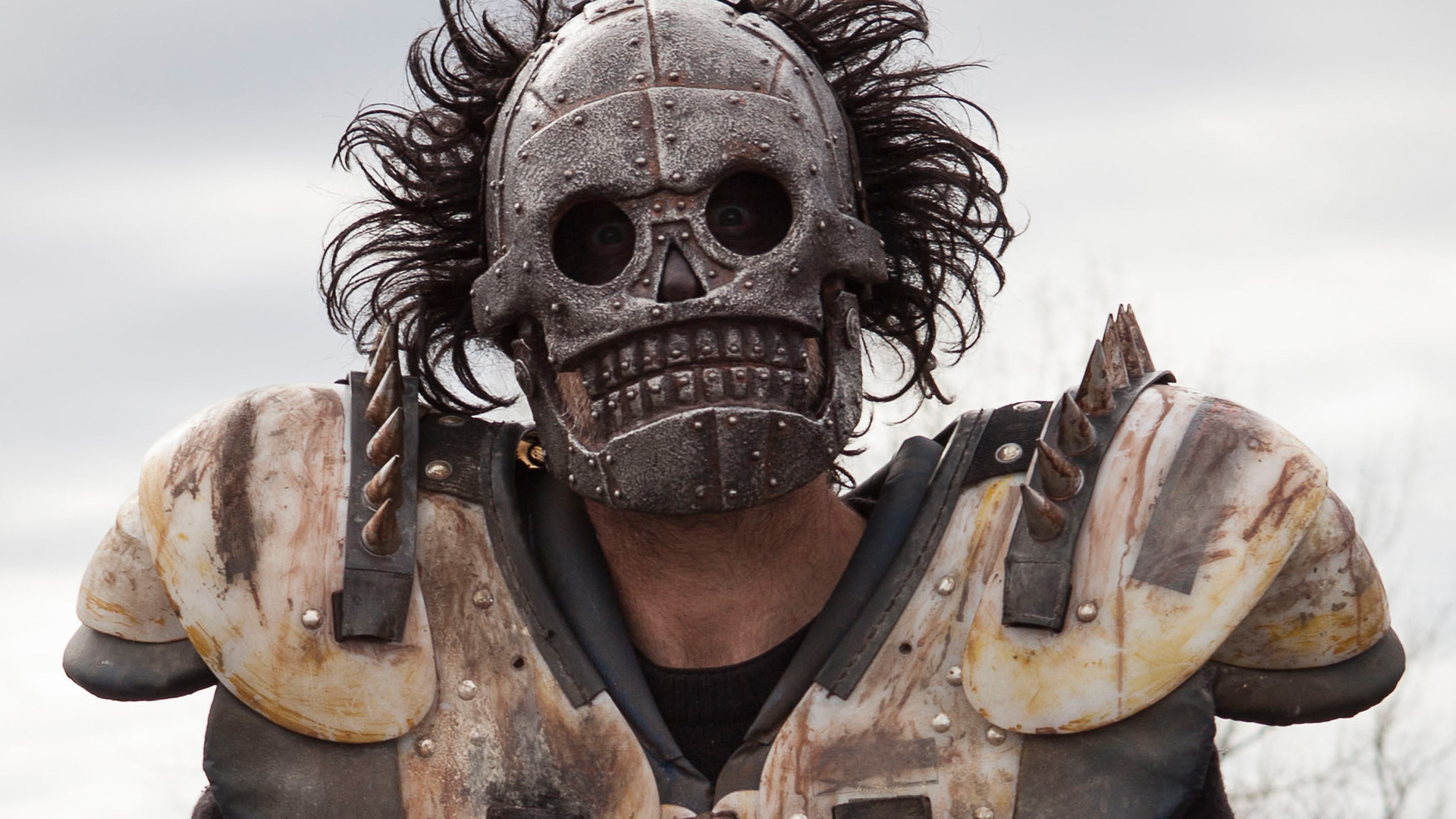 Parodies on the action genre took off in the 1980s and 1990s with classic movie series like Naked Gun and Hot Shots that were awesome slapstick versions of the time’s hard-boiled action flicks. In more recent years, a new wave of films hit action movie fans, that mixed their spoofing with sincere homages to our beloved genre. Kung Fury, Commando Ninja and Manborg excelled in compressing the essence of old-school action cinema into their runtime, and were loaded to the ceiling with insanity.

There’s a fourth entry to that list that took a slightly different route. Roadkill Superstar (aka RKSS) is a Canadian trio of filmmakers that garnered attention in the 2000s with a series of great short films parodying the action and horror genre. One of them was T is for Turbo, and in 2015 RKSS produced their first full-length feature Turbo Kid based on it.

After the apocalypse, The Kid scavenges the ruins of civilization for food, comic books and action figures on his BMX bike. One day, he finds the uniform and power glove of the mythical soldier Turbo Rider who fought in the war that destroyed civilization. With his new weapon and two mighty friends at his side, The Kid takes it up against the ruler of the wasteland Zeus and his army of sadistic killers.

In the world of Turbo Kid, there’s no more fuel to power cars. Everyone travels around on bicycles instead, and a flat tire can mean instant death by radiation or raiders. This is only one of the simple, but ingenious ideas Turbo Kid brings to the table. Even the most intimidating villains are sitting on BMX bikes when chasing after The Kid, and the front yard of the bad guys’ headquarter looks just like a middle school entrance with a long row of bicycles parked in front of it.

Turbo Kid is not just Mad Max on bicycles, though, but actually looks like it drew plenty of inspiration from genre entries such as Steel Dawn and Stryker. These trashy Mad Max copycats are a very fertile ground for a parody with their cheesy characters and dialogues, ridiculous outfits, and ultra-cheap action scenes. Turbo Kid exploits these treasure troves of B-grade post-apocalyptic cinema to the fullest, and also throws in a load of references to 1980s pop culture for good measure.

The kid goes on scavenging runs and returns with audio tapes and comic books to his cozy bunker where pink flamingos and bubble gum await him. The retro vibe is pushed even further with a killer synth-wave soundtrack, one of the best ever to make it into a movie. Turbo Kid excels at creating a sentimental nostalgic atmosphere, and not only for people who grew up in the 1980s. Even in a post-nuclear world, life is simpler and a lot more fun at times for kids than it is for adults. 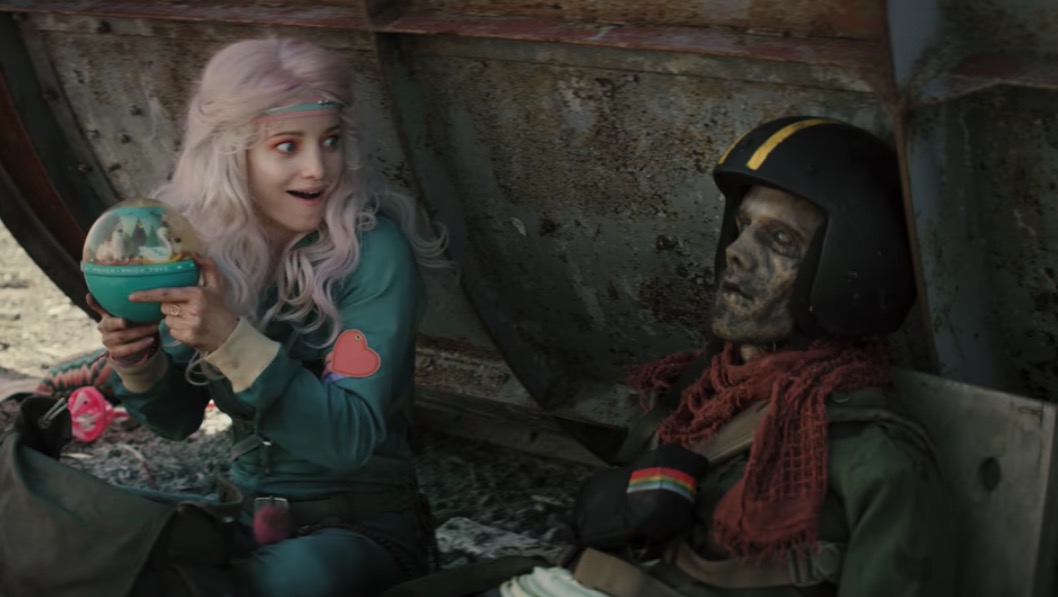 The film was shot in an abandoned asbestos mine. This already sounds like a creepy enough place, but it also looks the part with ruined buildings and giant piles of rubble put on display. Add to that a couple of skulls on pikes and decaying bodies lying around, and we get ourselves a perfect post-apocalyptic setting.

Turbo Kid may deliver slightly less action than its peers Kung Fury and Commando Ninja, but it still has its fair share of spectacle. A trademark of RKSS’ short films was their love for gory slapstick sequences, and in Turbo Kid they stayed true to this style without compromise. Actions classics like Aliens or Predator had their share of bloodshed but Turbo Kid stands a lot closer to all-out splatter films like Peter Jackson’s Braindead in its approach to the action scenes.

Everyone who takes issue with over-the-top violence may want to avoid the film, there’s plenty of heads being chopped off and fountains of blood spurting frequently. But if you can tolerate (or even be entertained by) crazy kills such as people getting their intestines unraveled out of their bodies while attached to a spinning bicycle wheel, stay tuned! The big finale is a colorful and upbeat massacre like you’ve never seen before, and reminds us of the ultimate survival rule for close combat: Eyes! Throat! Genitals! We also must mention Zeus’ skull-faced champion Skeletron, a worthy inductee into the action movie villain hall of fame, who really enjoys using his saw-blade bracers to paint the ground red whenever he gets the opportunity.

Despite the desolate setting and occasional outbursts of extreme violence, Turbo Kid is really a heart-warming affair, even if that may sound hard to believe. The spirited and goodhearted characters contribute a lot to this impression, and there’s zero cynicism in the whole film. Even Michael Ironside as uber-villain Zeus comes across as happy and relaxed most of the time when doing his evil business. And Laurence Leboeuf arguably delivers the most charming performance of the movie as Apple, The Kid’s enthusiastic and slightly weird companion, who looks like a fairy in a neon shell suit.

Even if you didn’t grow up in the 1980s, chances are Turbo Kid will make you smile more than once. It may even bring out your inner child mixed with an adults’ taste for bloody action and violence. Turbo Kid is is a skilled and charming homage to our favorite post-apocalyptic films, and a crazy good time!