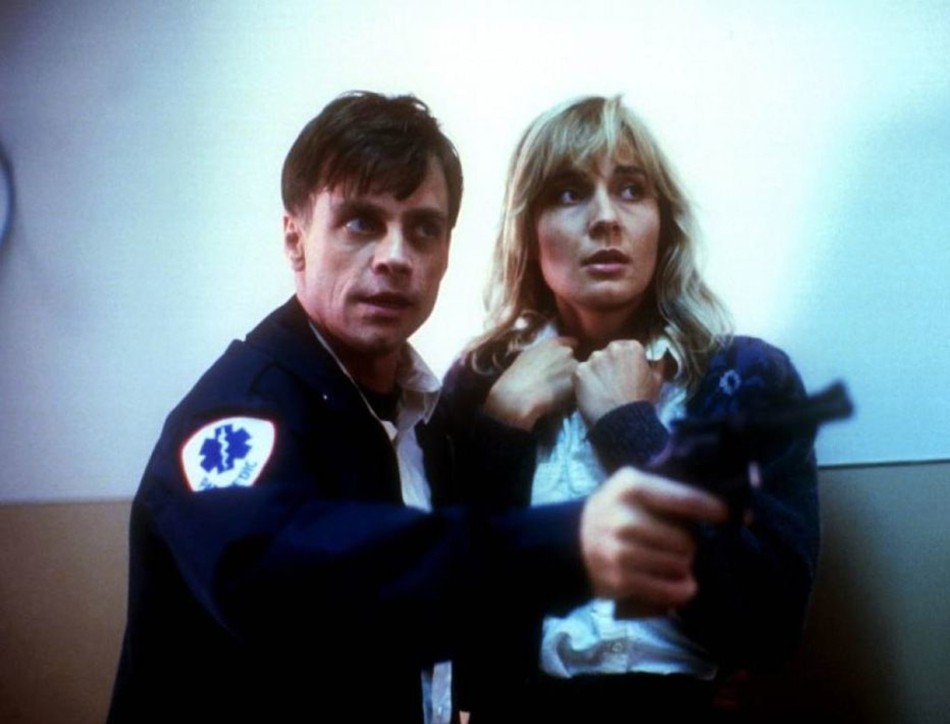 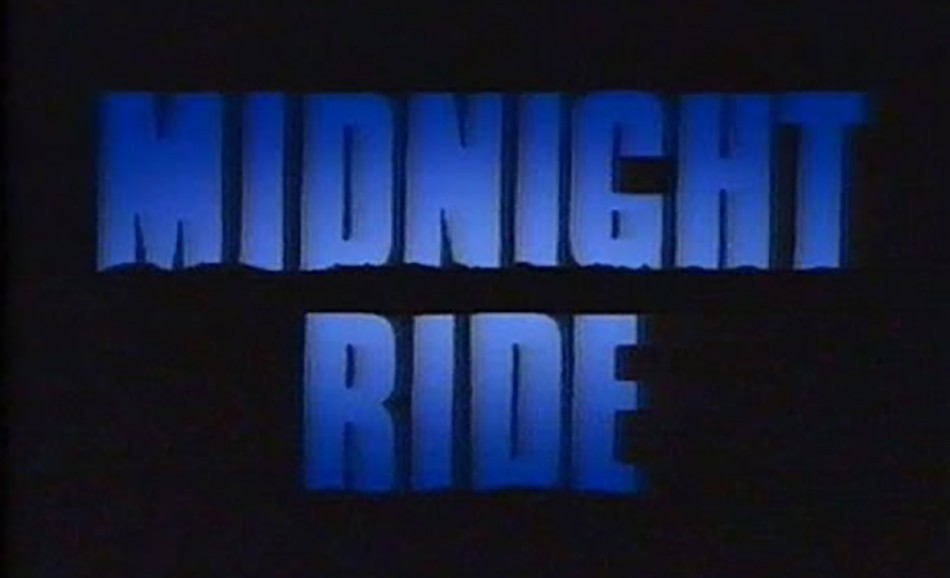 Housewife Laura (Savina Gersak) has had it with her cop husband Lawson (Michael Dudikoff). More devoted to his work than their relationship, she takes off in the middle of the night, intent on bunking with a friend until she can decide whether she wants to make their separation final. Meanwhile, despite having an injured leg, Lawson isn’t taking his abandonment lying down and pursues Laura in his own fashion, hoping for reconciliation.

On her way out of town, Laura encounters Justin McKay (Mark Hamill), a photography-enthusiast looking for a ride.Charmed by his boyish manner, Laura lets him in the passenger’s seat, unaware she’s set herself up for a night of madness and terror.

Justin is a mental hospital escapee, traumatized by memories of his homicidal mother and enamored by Laura’s similarities to his murdered sister. He wants to talk with his psychiatrist Dr. Hardy (Robert Mitchum), kill a few people on impulse, and win the terrified Laura’s heart before the night is through. Can Lawson rescue Laura and stop Justin’s rampage? And more importantly, will their cat-and-mouse game blow up every vehicle in town?

Imagine a hybrid between Friday the 13th and Duel. That’s a broad description of Midnight Ride. Produced by Cannon Films, it’s a fast-paced delight from start to finish, clocking in at a lean ninety-minute run-time and featuring all the slasher-style killings and car explosions your little heart could ever desire. Somehow, it has never amassed much of a following despite its immense entertainment value.

Part of the appeal comes from just how over-the-top and strange the movie gets. Laura’s ordeal with Justin includes a number of bizarre episodes. Early on, Justin rips a sleazy motel owner’s glass eye out of her head so he can make a necklace for Laura with it. (He proceeds to suck on the eye in subsequent scenes when distracted and bored—a little detail that gets me every time.) Later on, Dudikoff gets tied spread-eagle to the hood of a truck, with Hamill laughing wickedly behind the wheel as he powers it down the road at high-speed. 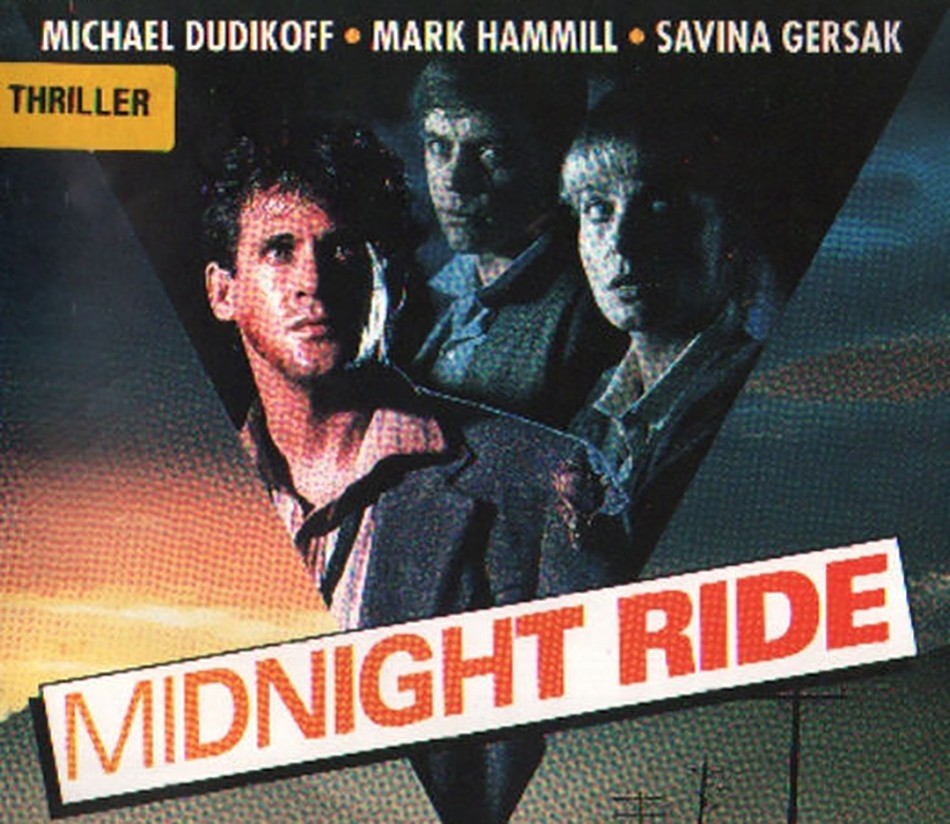 Midnight Ride is peppered with such moments. Justin’s body count grows as he slashes throats and guns down the authorities. He dons more disguises than Inspector Clouseau as he stalks Laura when she briefly escapes him. Cars explode one after another, to the point where it almost becomes a running gag. The action set-pieces grow in insanity as the story rushes to its climax, a bombastic showdown in a hospital where Hamill uses a conveniently-located four-wheeler to chase down Dudikoff after they square off with a bone-saw.

Hamill’s eccentric performance is the chief delight of the film. Put Norman Bates’s mother issues and the Joker’s gleeful sadism in a blender, add a little of Mad Max’s road warrior flair, and you’ve got Justin McKay. Hamill steals every scene with his mad cackling, compulsive nail-biting, and childlike enthusiasm for violence. His line deliveries are delicious too, whether he insists he get a photograph of Laura in a sing-song voice or disappointedly chides her for trying to bribe him with sex.

At one point, when Dr. Hardy tries to get Justin to remember how therapy used to stop the voices in his head from convincing him to murder, Justin says with a shrug, “Cut the crap, doc. I’m still killing people!”

Though Hamill leaves the biggest impression, Dudikoff is no slouch as the square-jawed hero. Like Hamill, he seems to be aware of how seriously to take the material and has a great deal of fun delivering lines such as, “I’m tired! I’m pissed! And I’m ready to kill!” His character does have a dark side—his unwillingness to give Laura some space is a bit creepy, to be honest—but in the end, he’s the perfect hero to Hamill’s villain.

The film has some weaknesses, though how much they affect your enjoyment will vary. The editing is awkward during the later chase scenes, more confusing than exciting. Savina Gersak’s performance is often flat and emotionless, even when the leering Hamill has a knife in her face.

Hollywood legend Robert Mitchum seems to be here solely for the paycheck, all but sleeping through his scenes. Like Gersak, he regards the peril he’s in with a casualness most might find unintentionally comical. However, these elements just add to the charm. 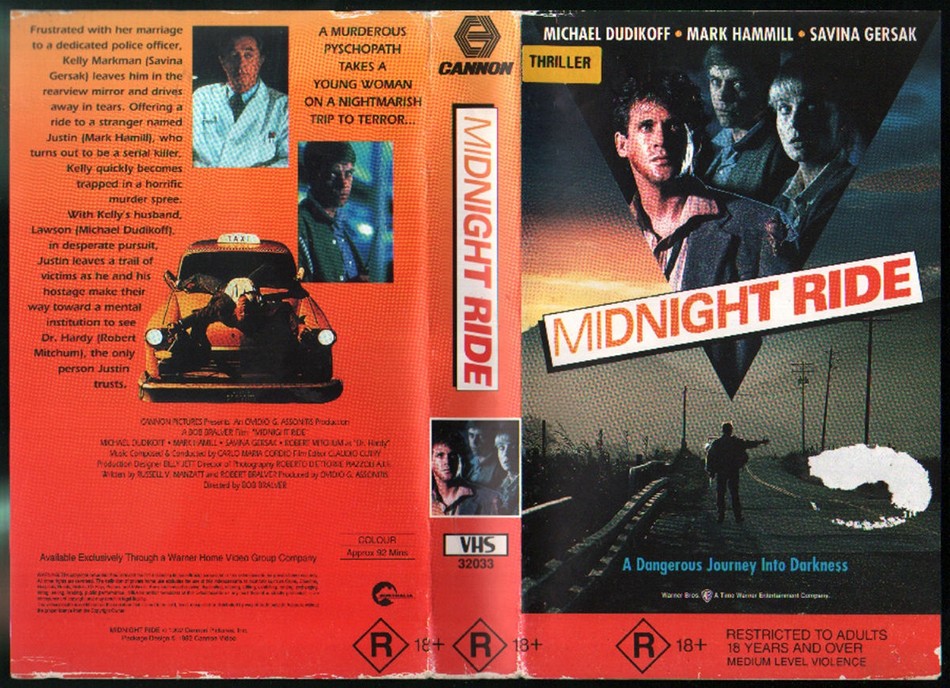 Despite its campy delights and the presence of Luke Skywalker himself, Midnight Ride remains underseen. Those interested will have to satisfy themselves with a VHS copy. In a perfect world, this movie would have a DVD release stateside (dare I dream of a Blu-ray edition?), perhaps including a short interview with Hamill, who as far as I know has never spoken about this movie. A media upgrade would be welcome in any case, since the horror movie-style lighting’s effectiveness is often undercut by the blurred presentation on video.

I would call Midnight Ride a guilty pleasure, but so great is my love for it that I just can’t. I love every overcooked moment unabashedly and would not have it any other way.

Do you remember Midnight Ride (1990)? Let us know your thoughts in the comments or on our Facebook page!