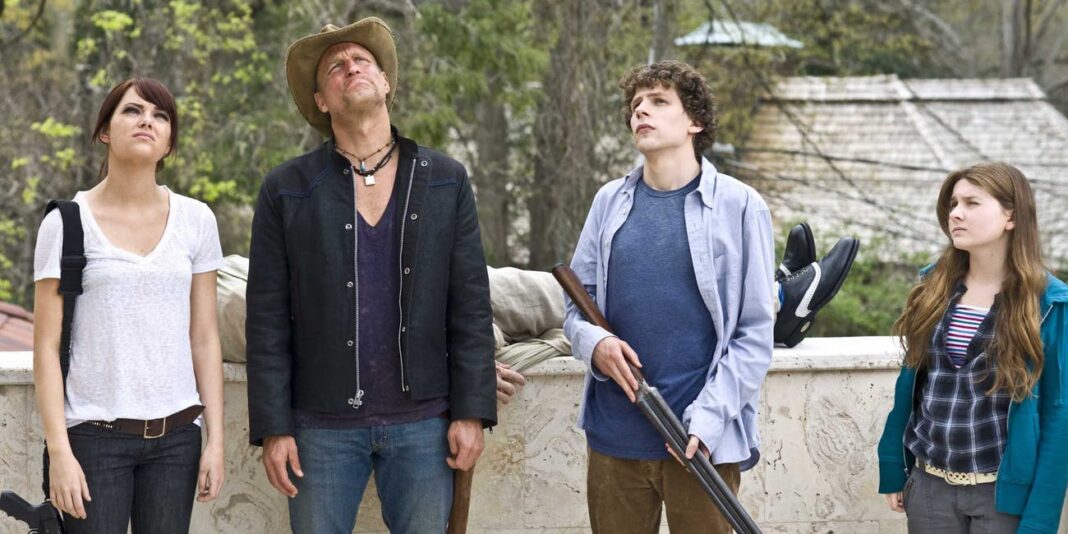 Beginning in the 21st century zombie fever only begun to simmer. Audiences familiar with the elements (slow walk, a hunger for brains, humanity falling apart) had yet to dive full into the trend that launched shows like The Walking Dead to stardom.

In the vein of cult classic Shaun of the Dead Ruben Fleischer’s directorial debut Zombieland took the done tropes of the zombie genre and reinjected it with plenty of self-reflective humor. Zombieland’s self-aware style of humor paired with a creative display of gun violence, several up-and-coming actors, and Woody Harrelson made a memorable classic out of an otherwise paired down film.

Jesse Eisenberg plays Columbus, Ohio. While out traveling from his college in Texas he encounters the carefree wild man Tallahassee. The two strike an uneasy friendship as they travel east stopping along the way to get conned by Wichita (Emma Stone) and Little Rock (Abigail Breslin). The four strike an uneasy family and in the midst of a full blown zombie apocalypse they struggle to form the root bonds of what they consider a family.

Woody Harrelson as the Macho Star

Eisenberg drives the film as its central protagonist. His character’s hypochondriac approach to surviving the apocalypse matches Eisenberg’s caricature to a tee. Stone and Breslin turn in performances clearly delighting in playing with other actors. Harrelson anchors the film as Eisenberg’s antithesis.

His brand of macho harkens back to WWE wrestlers and Nicholas Cage in Con Air. Thankfully the film takes time to poke fun at Eisenberg and Harrelson’s characters with their polar opposite approaches to defeating the undead. In this movie there’s no one right way to kill a zombie (although there is a kill of the week!)

Rhett Reese and Paul Wernick’s script joyously pokes at all the holes audiences have found in previous Zombie movies. Why not just outrun a zombie? Always shoot them in the head, twice. It’s the same Max Brooks’ level obsession with logic that drives their anarchical script. It’s not enough to shoot a zombie. Woody Harrelson has to play the tune from Deliverance on a banjo before bashing a creature’s head in. More on the zombie kills in a second. 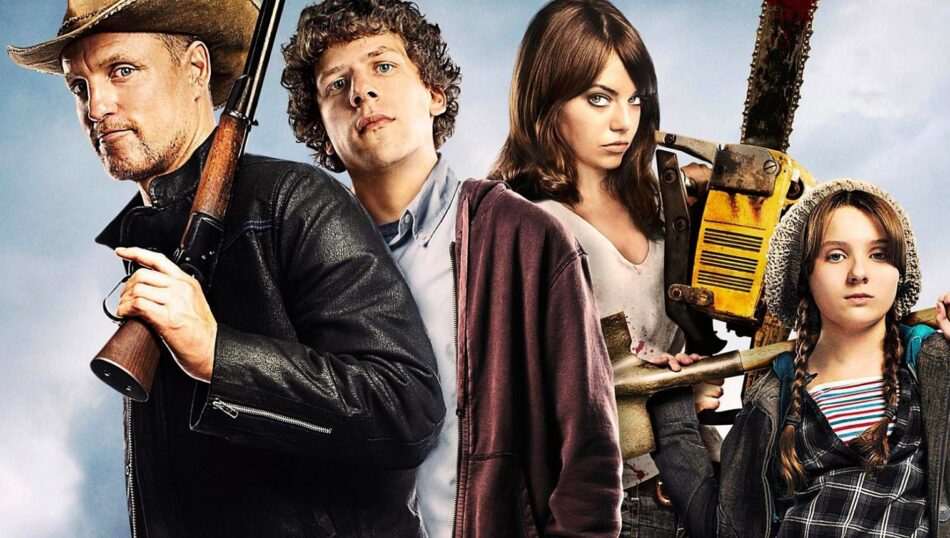 Zombieland delivers on its jokes, sure but shines when it hones in on the “family” at the heart of this story. Each character plays a role in this dysfunctional family slowly earning your affection not only for each one individually but also for the family unit. It’s the end of the world, but that doesn’t mean you have to go it alone. The movie moves past it’s humor to focus on the humanity at the core giving us just enough to worry when Eisenberg runs into a zombie-infested fun house. You care about them, even if they’re painfully aware of the trope that is their world.

Fleischer’s direction guides the film through it’s more complicated set pieces. Originally conceived as a tv show, Zombieland planned to offer a ‘Kill of the Week’ with elaborate traps. Retooled for a movie it gains bigger set pieces earning us a guns-blazing finale. The title of the film comes into play just as Stone and Breslin travel to a theme park (forgetting the population of Undead just outside.)

The two girls launch up into the air then plunge down, zombie hands waiting for them. Even though Eisenberg fights to rescue the girls Harrelson gets to have all the fun. Watch him hang on to a theme park swing set while blowing ungodly amounts of bullets into a crowd of undead. His pump-action shotgun blows pellets into every rotted face he finds on the roller coaster. He makes the shooting gallery his last stand by dual-wielding pistols and firing indiscriminately into the undead horde. You can’t get more ridiculous zombie murder than this. 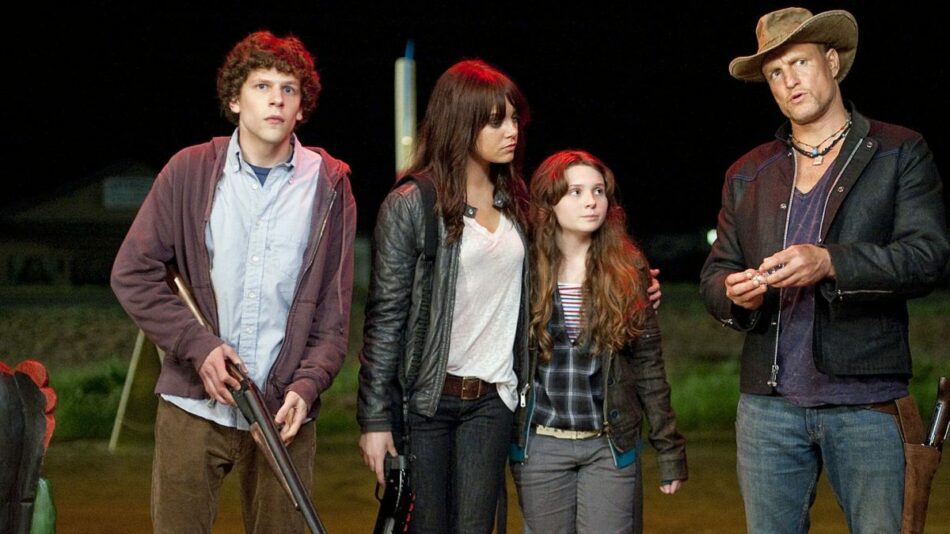 Zombieland makes its mark in the canon of zombie cinema by poking holes in the common themes of previous films. Like it’s heavy rock soundtrack it shreds apart hordes of undead (unafraid to splatter some digital blood on the camera.) Harrelson gets all the jokes while Jesse Eisenberg drives the film forward. Emma Stone and Abigail Breslin are just along for the ride.

In a day before the zeitgeist of Zombie-mania one movie dared to answer those nitpicky audience questions of ‘what if’ by unloading limitless bullets into classic zombie cinema tropes. Zombieland’s gleeful anarchy never strays far from it’s emotional core and in that sense it packs both a punch and a punchline.

Zombieland: Double Tap – Not Quite as Ultimate as the Original