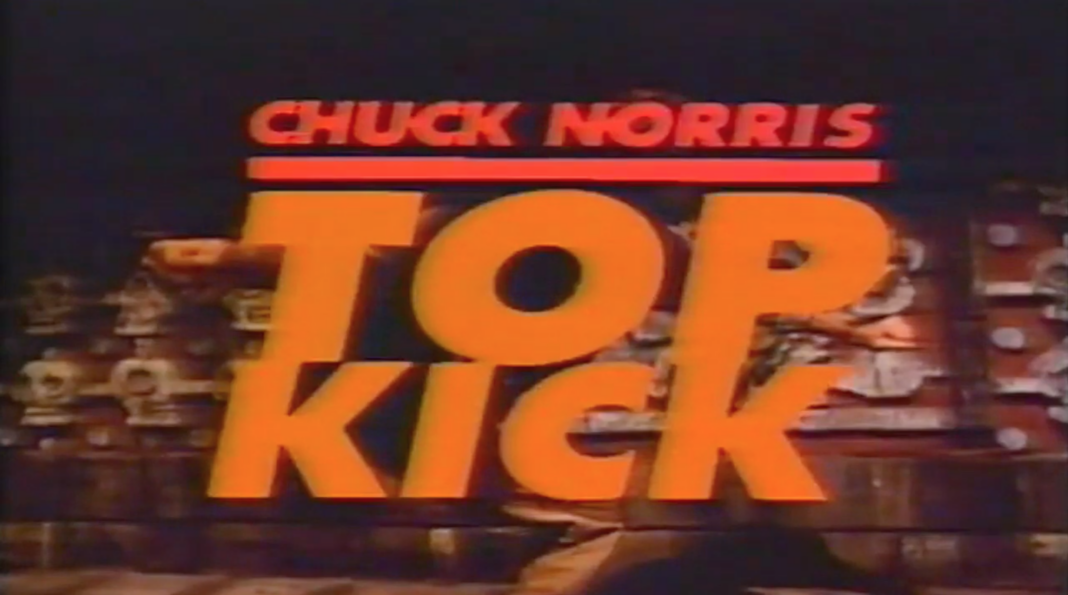 Check out this cool perspective trailer for a never-to-be Cannon Films classic!

For many fans of Chuck Norris, his days collaborating with the late / great film group Cannon Films were the pinnacle of the Chuck’s action movie excellence. From awesome titles like Invasion USA, The Hero and the Terror and Firewalker, to ultimate franchises like The Delta Force and the Missing in Action films, Chuck’s time with Cannon can be called nothing short of prolific – and, well – very ultimate.

However, as was also very much the Cannon way, movies were constantly being conceived, pitched and even financed on the fly (resulting in many going into production with barely a title, much less a script on paper) and the duo of Menahem Golan and Yoram Globus were always shopping around new features. One of these concepts apparently even produced a short teaser trailer featuring Chuck Norris in the lead role of a new actioner called “Top Kick” – check it out below!

At only 19 seconds this is clearly just a spec trailer (and no word yet on its actual authenticity, but it certainly looks like it could have been produced from the era). It also sounds like this would have been somewhere in the very late 80s which again, would have been peak era for the Cannon Films and Chuck Norris partnership.

It also appears that Top Kick would have been a collaboration with Chuck’s son Mike Norris and was also shopped around under the spec titles “Tough Kick” and “Cold to Touch”. Many Chuck Norris fans will also be quick to point out that Chuck would go on to eventually star in an action/comedy called Sidekicks in 1992 (which was another collaboration with Chuck’s brother Aaron Norris) as well.

Regardless of how it came about or what eventually happened to this shelved project, it certainly looks like it could have quickly become another instant Chuck Norris classic which I’d personally love to discover as a VHS one day and pop in the old VCR.

It’s also cool to see the different Chuck Norris clips from his previous Cannon Films work spliced together to give the sense that the man could have kept this up for decades if he so chose, and if his partnership with Cannon had lasted just a bit longer.