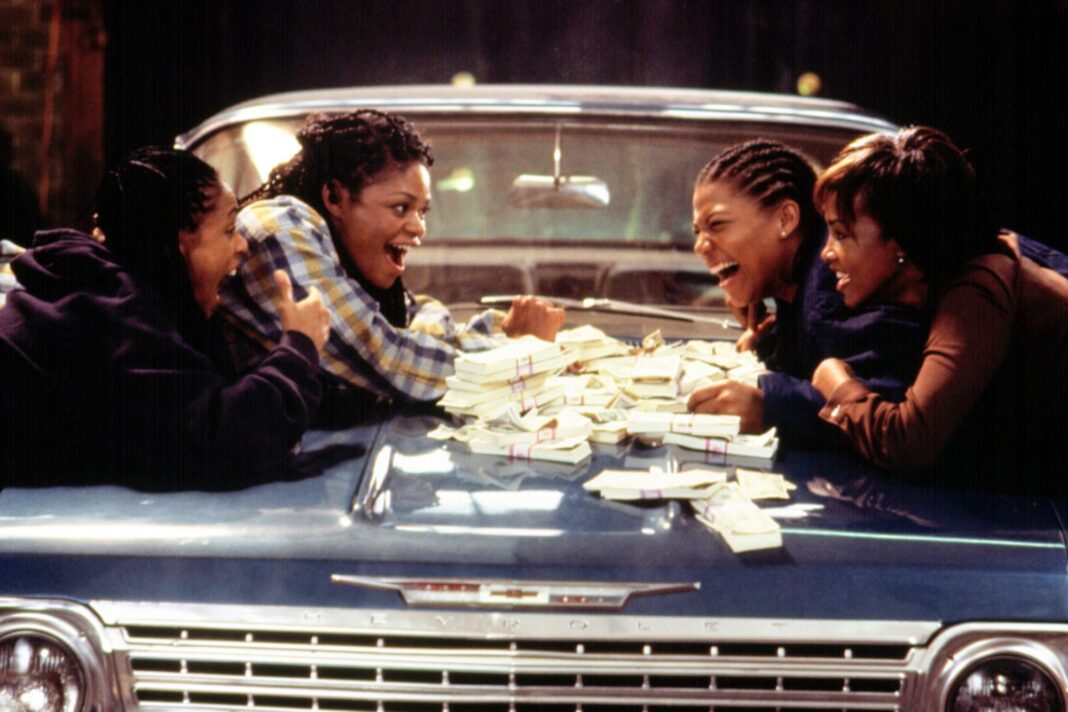 Or, maybe you’ve seen it. I don’t know you. But it’s awesome and here’s why! 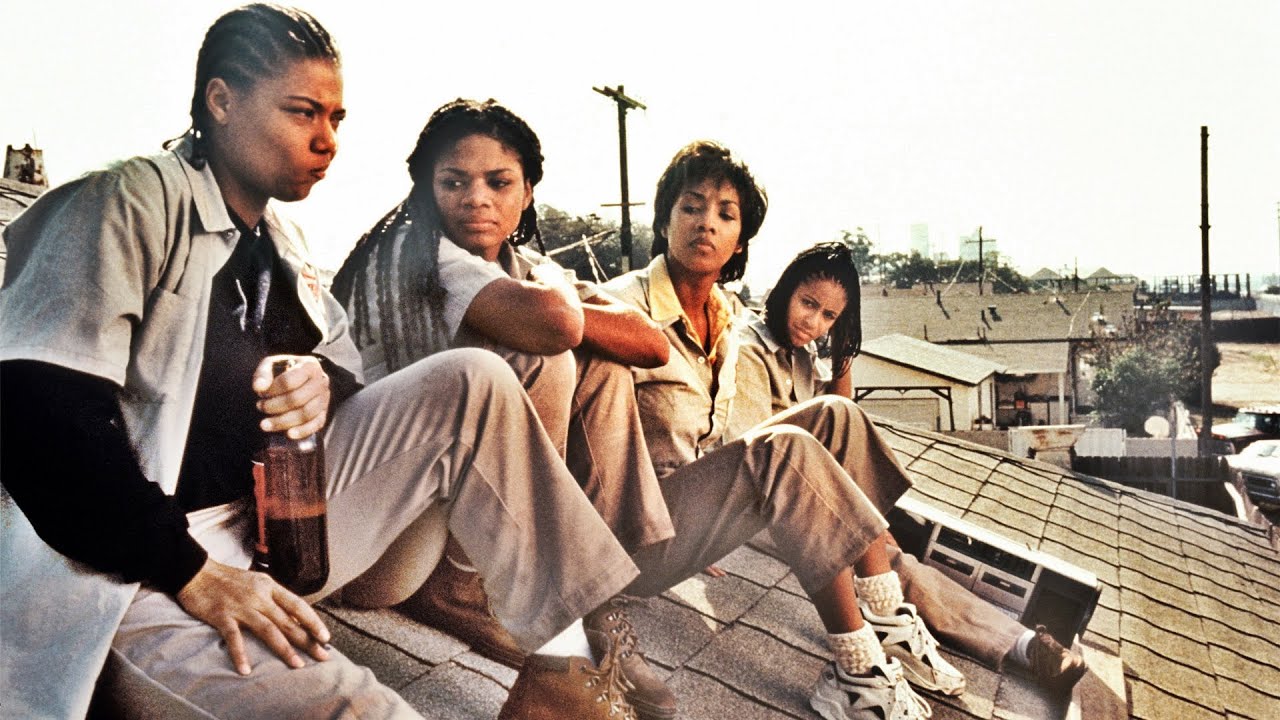 Starting off with a bank heist so daringly stupid, so poorly performed and so disasterly undertaken (editor’s note: is it undertooken? No, I guess that’s right) you’d think this movie might be a mess. Except, of course, it’s not.

The opening heist sequence is one of the best pieces of cinematic storytelling that I’ve ever seen. Seriously, it rivals some of the best set pieces of Kathryn Bigelow’s Point Break with Bodhi and gang and those of Micheal Mann’s Heat (which themselves were heisted by Christopher Nolan in The Dark Knight). It also sets things up for what Set it Off is about – four best friends, struggling to get by, but always sticking together while they watch the dumb world around them constantly make a damn mess of itself.

Directed by F. Gary Gray (great name, great resume with Friday, The Italian Job, Law Abiding Citizen, The Fate of the Furious), written by Kate Lanier and Takashi Bufford and starring an ensemble main cast of Jada Pinkett Smith, Queen Latifah, Vivica A. Fox and Kimberly Elise, we have one of the greatest heist movies ever made… and if you haven’t seen it, here are all the reasons you need to right now!

The Leading Ladies of Action

We’ll get to the action and the heist scenes in a bit, but off the bat this was a great vehicle for featuring a new and diverse cast taking on the tried and true tropes of the standard back robbing escapades of American cinema. Every badass action scene that you’d expect from the initial injustice that serves as the impetus, the planning and the emotional high experienced after that first heist, and the inevitable fall due to pushing to go too big ends with a great showdown that hits every point along the way – all led by some phenomenal performances.

They all have different reasons for going in on their heists. Vivica A. Fox’s “Frankie” is spurred by the initial botched heist pulled on her while she’s working as a bank teller, her bosses find out she knew the assimilate from the neighborhood she grew up in and immediately fire her on the spot for any perspective involvement, Jada Pinkett’s “Stony” watches her brother gunned down by police mistaking him for a gang member, Kiberly Elise’s “T.T.” has her son taken away from her due to her low wages from the cleaning job they all work, and Queen Latifah’s “Cleo” joins up because she’s awesome and the majority of the comic relief for the whole film. 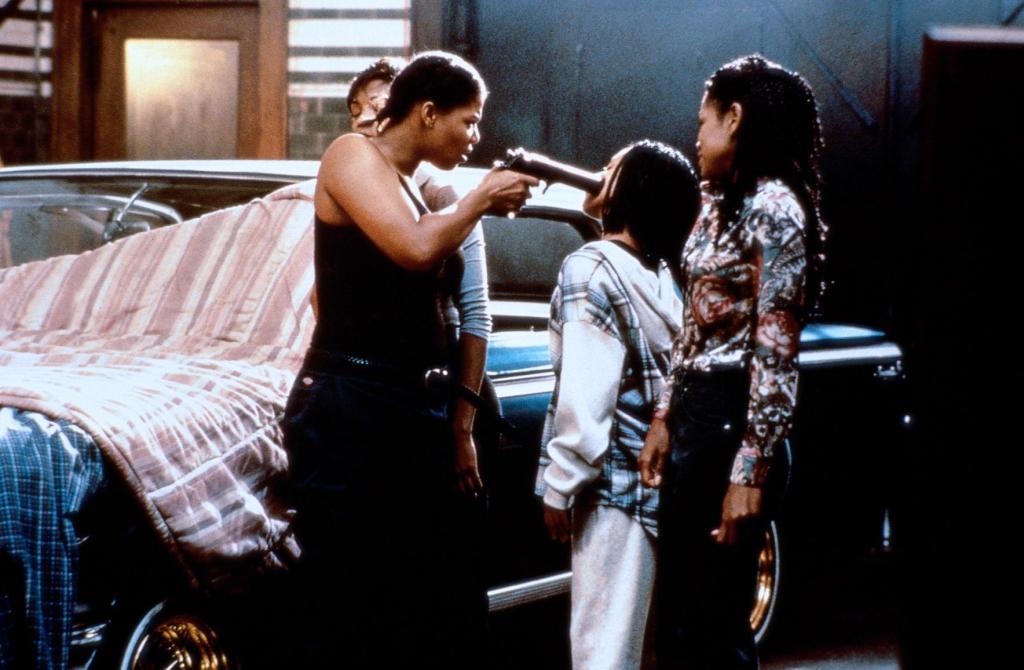 So, I’m sure plenty of people have seen this one actually. It didn’t get released in a vacuum. It came out in 1996 to solid reviews and did quite well at the box office grossing over $40 million against a budget under $10 mil. But this was a year that saw some big draws for action titles like Independence Day, Mission: Impossible and The Rock, but those were all summer blockbusters, the only real challenger for action in the late fall release of Set it Off was Mel Gibson’s Ransom – another solid actioner – that perhaps over-performed with $300 million.

However, while Set it Off might not have had the same familiar male action star fire power, it’s core cast included three women bursting onto the scene along with one who was actually making her feature film debut (being Kimberly Elise). And what we get feels almost like a real life portrayal of these four women bonding together, sharing their lives and ultimately plotting to turn into back robbers. Which is awesome.

Let’s Talk about the Ultimate Action!

Alright, so now for the goods – the action! Set it Off is HUGE in its action pieces. Like, I haven’t felt this much spine-tingling in an action scene since Terminator 2. I don’t know how this movie was pulled off for under $10 million with some of the chases and shootouts which are indiscernible from Cameron or Bay stunts. The ladies pull off some very well-crafted heists that are full of all the style and suspense you’d expect from a French New Wave film, then blast out of the banks by ramming trucks through windows and executing high octane shootouts in the lobby.

And while there’s certainly a solid love story thrown in with Pinkett’s Stony and Blair Underwood’s “Keith Weston” (who, fittingly, is a bank executive at the large bank the group plans to rob for their final score), we’re going to let you enjoy those moments while we head straight onto the ultimate action.

Plus we get one of the best counters to these four leading women with the shrill, whiny agitated voice of John C. McGinley (also fitting in pretty much the same role he played in Point Break five years earlier) as their foil detective on the case. And for extra comeuppance sauce for the ending, McGinley’s “Detective Strode” is both Frankie’s firing and the mistaken shooting of Stony’s brother. So, by the end when he gets his final word – and does actually attempt to recognize who they are and why they’re obviously justified in their actions – it makes for quite a satisfying and high stakes ending.