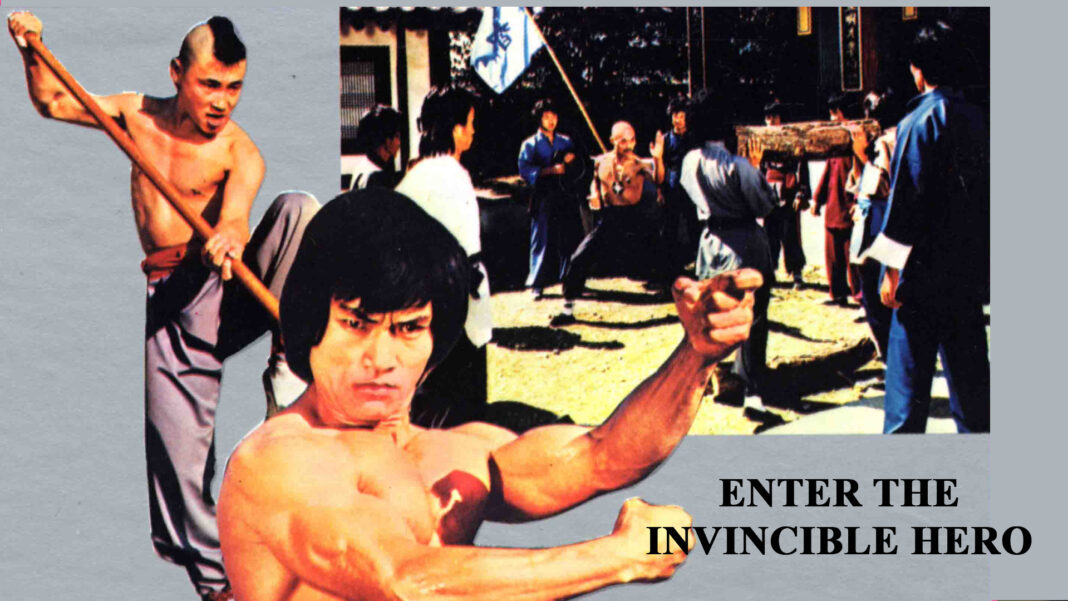 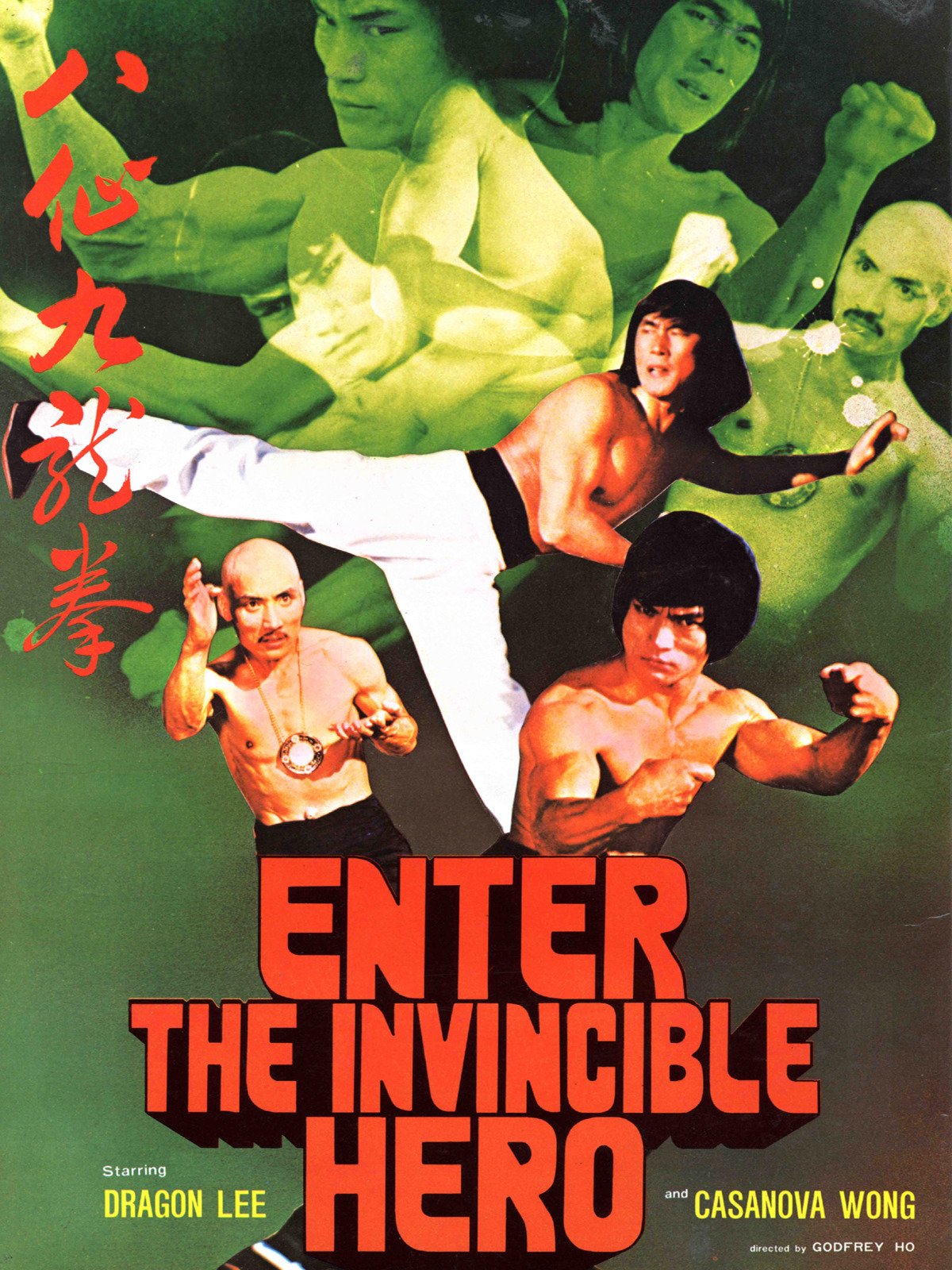 After enjoying The Dynamite Shaolin Heroes (1977), I took a chance on Godfrey Ho’s next Kung Fu movie. This time I watched Enter the Invincible Hero (1977) [Original Chinese title: Heugpyobigaeg]. The team behind it is starting to look familiar: Godfrey Ho as director, and producers Joseph Lai of distributor IFD Films and Arts Limited and Tomas Tang of production company Filmark International Ltd.

An Introduction to Godfrey Ho and ‘The Blazing Ninja’ (1973)

Godfrey Ho Continues to Cash in on Bruce Lee

Enter the Invincible Hero turned out to be in the Bruceploitation category of Kung Fu because of it’s blatant cashing-in on Bruce Lee’s popularity. It stars Dragon Lee, Casanova Wong and Min Kyu Choi. Korean martial artist Dragon Lee was given a Bruce Lee haircut; a stage name combining Enter The Dragon and Bruce Lee; and cast in films like this one. One hopes he had a say in those decisions. Also Korean is Casanova Wong. A fact that segues into something I’ve come to realise about Godfrey Ho’s films.

They’re not from Hong Kong. This whole time I thought I was watching Hong Kong Kung Fu movies. And why wouldn’t I? The team behind them are from Hong Kong. The films themselves are presented as being Hong Kong Kung Fu movies. And there’s almost nothing on IMDb to suggest otherwise. But no. They are at least as much Korean as they are Hong Kong in origin. The stories may be set in China with Chinese characters, but the filming locations are Korean. As are most of the actors, actresses and crew. Often credited with Chinese stage names. Italian and Filipino action movies later used the same tricks to appear American.

The setting for this story is historical. When that is exactly, we’re never told. At first it looks like it’ll be about bandits robbing people. Instead it develops into a story of crime, treachery and double-crossing. Fine, but how good is it? Or to put it another way, how ULTIMATE is Enter the Invincible Hero?

There’s a lot to enjoy about Enter the Invincible Hero. First and foremost is the quantity and pace of action. It fits a lot fight scenes into the film’s 85 minute runtime. More so than either The Blazing Ninja (1973) or The Dynamite Shaolin Heroes (1977). The quality of the fight scenes here is also much higher. Even I can see that the fights are technically well staged and performed. At least compared to what I’ve seen before. As well as kicks and punches, there are swords and sticks. Some of the fights are more intricate and have a Jackie Chan style whimsy. Then there’s the classic era Kung Fu clichés. I’m not supposed to enjoy these, but that’s not going to stop me. Here is my checklist of endearing Chopsocky clichés for Enter the Invincible Hero:

It’s not all good for Enter the Invincible Hero. Like The Dynamite Shaolin Heroes before it, this one suffers in the story and plot department. I spend half the film struggling to figure out what’s happening and why. It gradually becomes clearer, but it could be spelt out more clearly to dummies like me. The first scene has a group of townspeople being attacked by bandits. The leader of those bandits was a hunchback wearing an eye-patch. You’d expect him to be the main bad guy. But no. He is instead a low level henchman. Missed opportunity there, I think. Then there are plot points that aren’t explained at all. Such as the bad guy’s deformed belly button and his medallion which inexplicably makes a “boing” sound effect. Or the strange dots on another bad guy’s fingers. These things should have been explained, but never were. 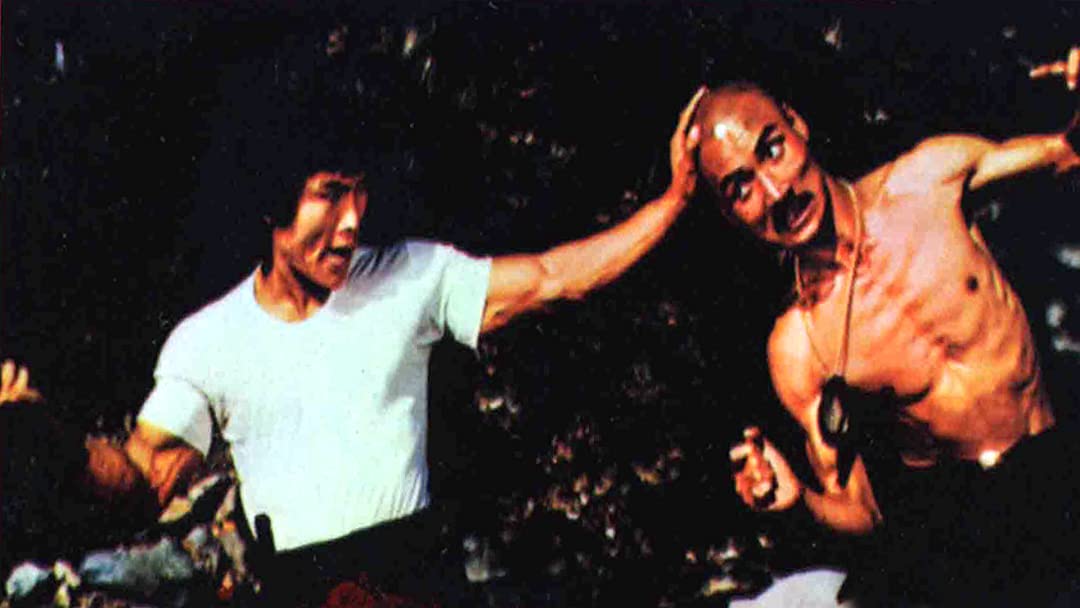 Overall, I enjoyed Enter the Invincible Hero. I’m happy to recommend it if you either like classic Chopsocky or are open minded enough to try it. It’s perhaps the cheesiest, most clichéd, most entertaining example of the genre I’ve yet seen. The story isn’t as good as The Dynamite Shaolin Heroes, but it compensates with more and better Kung Fu fighting. And that is what we came here for.

Article by: Hywel Price-Evans who specialises in terraforming for The Company. His hobbies include re-establishing contact with the colonists on planet LV-426 and discovering obscure action movies from the home video era.