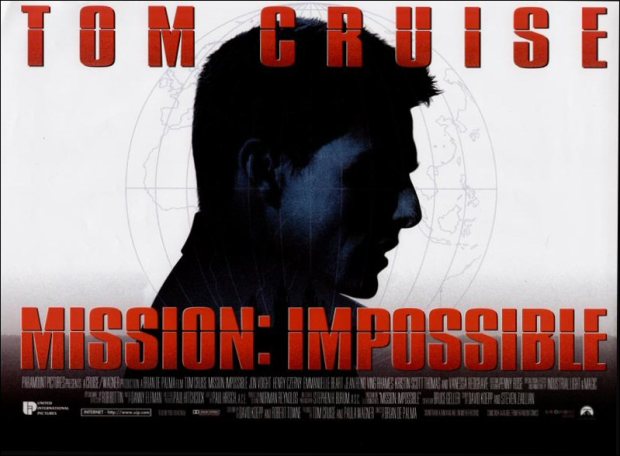 The year was 1996 and the action movie was in not in good shape. At the box office all the great action franchises seemed to have fallen silent. The great action movie titans seemed to have had their heyday. The Die Hard franchise starring Bruce Willis was, for a time at least, finished. Stallone – although staring in great action movies in the early 1990s like Demolition Man (1993) – couldn’t seem to land on a hit franchise like he did with Rocky and Rambo and the massively underrated Judge Dredd (1995) was unfairly destroyed by critics and that in turn hurt at the box office.

Schwarzenegger was making movies like Kindergarten Cop (1990) that appealed to a more family orientated audience and the VHS market had changed massively. Low budget movie makers like the awesome Cannon Films were largely out of business come half way through the decade and the video distribution  business model was more focused on distribution of successful blockbusters like Disney films and big summer films like Jurassic Park (1993) than offering a wide variety of cheap action movies. Being an action movie fan in the mid 90s wasn’t a whole lot of fun until…

Back with a Bang

Mission Impossible came to the public’s attention in a big way. Based on the television series of the same name, which was already pretty iconic around the world. The story follows a team of the IMF (Impossible Missions Force) who are in Paris to apprehend an enemy spy with an incredibly sensitive list of secret information. The operation goes incredibly badly and we follow the story of Ethan Hunt (Tom Cruise) and his mission to uncover the mole who has framed him for the murders of the Impossible Missions Force (IMF) team.

Mission Impossible was released to great fanfare. Unlike now where publicity for a movie starts before it is even in production those pre Internet days of movie promotion meant that there was an assault on the senses, magazine, radio and television adverts, interviews on chat shows and the news all a few weeks before the movie came out. Mission Impossible was supported by a range of merchandise, a tie-in novelization, action figures and the promise of a cutting edge computer game plus two members of rock band U2 putting together a surprisingly listenable remix of the famous Mission Impossible theme tune. As well as all this the movie had a 15 million dollar promotional deal with Apple computers. The hype was real… the high octane advertising definitely got the attention of this action movie fan. 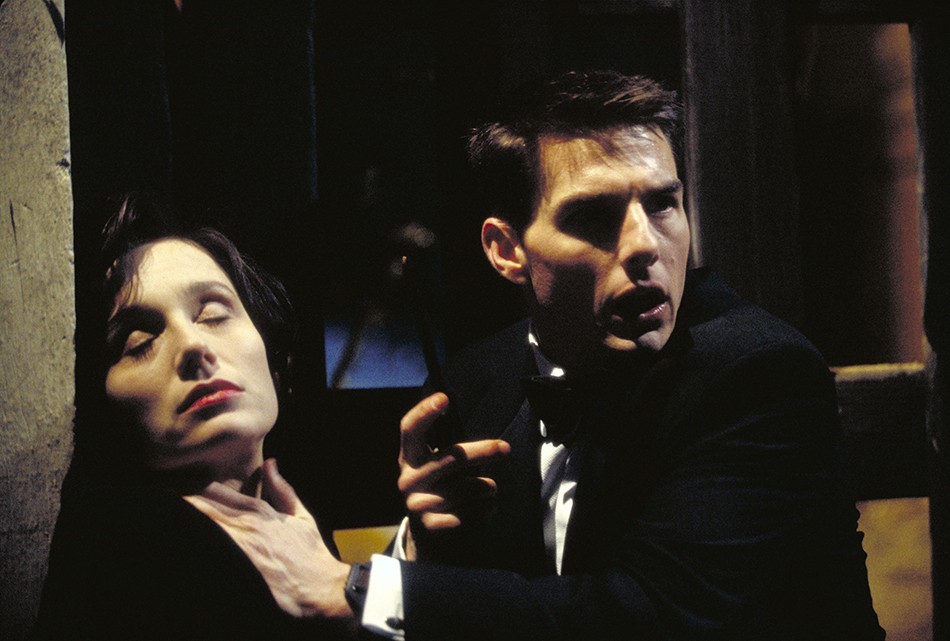 Paramount Pictures had the rights to make a mission impossible movie for some time but couldn’t develop anything. That was until iconic Hollywood star of the 80s Tom Cruise, who had been a childhood fan of the T. V show growing up, grabbed the opportunity to make a film version. It was the first project for his new production company and he negotiated with Paramount on a budget of 70 million dollars.

It’s increasingly easy to forget how radical, fresh and revolutionary adapting an iconic TV series into a big budget movie was in an era where audiences almost expect franchises to have sequels, reboots, spin offs and second lives. It was only the most venerated franchises with cult followings like Star Trek that would get the silver screen treatment. It was a huge risk bringing Mission Impossible to a new generation and Cruise would need to assemble the best of the best in Hollywood to make this mission possible. (Editor’s note: an ultimate pun!)

In many ways Mission Impossible could have been a by the numbers, mid budget, largely forgettable chapter in action movie history but Cruise genuinely wanted to create the best possible movies he could. The foundation of creating a franchise that redefined the action movie was to pick a great director. Cruise hired Hollywood legend Brian De Palma. De Palma was a perfect choice to direct, with a reputation for producing classy, tension filled, complex action films such as Scarface (1983) and The Untouchables (1987). Da Palma had problems with the script when he came to Mission Impossible and would actually devise many of the action sequences that go into the movie.

He expertly navigated the shady world of espionage with great ease. His direction creates a hyper reality where every shot of the movie is full of atmosphere and European class. Location filming in Paris and London give what would have been quite a unique setting at the time for a big budget action movie. In typical Da Palma style he ups the tension and for film that could of had quite a complex plot everything is explained to the audience in a way that draws you in. The cast are also framed beautifully and you really feel every part of Hunt’s quest for justice. 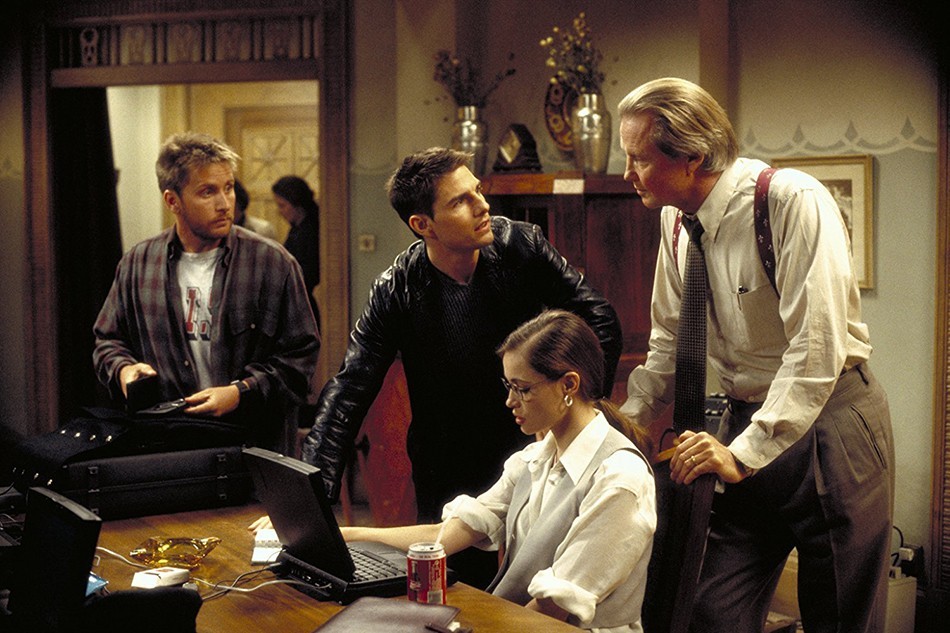 The other real merit of this movie is its cast. One major criticism of action films of the 1980s and 1990s was a lack of character development and emotional connection with the audience and  that the action movie stars of that era gave wooden performances (which is massively untrue). Mission Impossible could not be further from those critical accusations. The cast assembled for this move is almost perfect. Tom Cruise’s performance is maybe one of his best, absolutely commanding the screen, communicating with the audience. His foil Jim Phelps (the only character to come from the original series) is played by Jon Voight, a veteran of action thrillers such as the Odessa File (1974) who plays the role with cunning and skill.

The supporting cast is excellent including Emilio Estevez who gives a fun performance, the stunning Kristin Scott Thomas who has made a vocation of playing sophisticated and shady powerful women and was last seen doing just that in Tomb Raider (2018), great performances from Jean Reno and Ving Rhames and a particularly entertaining performance from acting veteran Vanessa Redgrave. The only really weak link in the chain is Emmanuelle Béart, although she smolders as a femme fatale she maybe doesn’t deliver the same level of performance as the rest of the cast. Interestingly the kind of performances on show here define the kind of acting that can be found in action movies to come.

Your mission if you choose to accept it

All in all Mission impossible was a huge success. Grossing over $457 million worldwide at the box office, it smashed box office records set by Jurassic Park (1993) and Terminator 2: Judgement Day (1991). It got generally positive reviews from the critics and had action sequences that caught the popular imagination.

It changed the way action movies could be presented. It helped, with Goldeneye (1995), to bring back the high octane action espionage movie to a mainstream audience, a genre which had been out of favor for some time. Its legacy is massive and the movie has aged remarkably well. A sequel will of course follow but that is for part two.

How That ‘Top Gun 2’ Trailer is Tom Cruise’s Ultimate Tower...