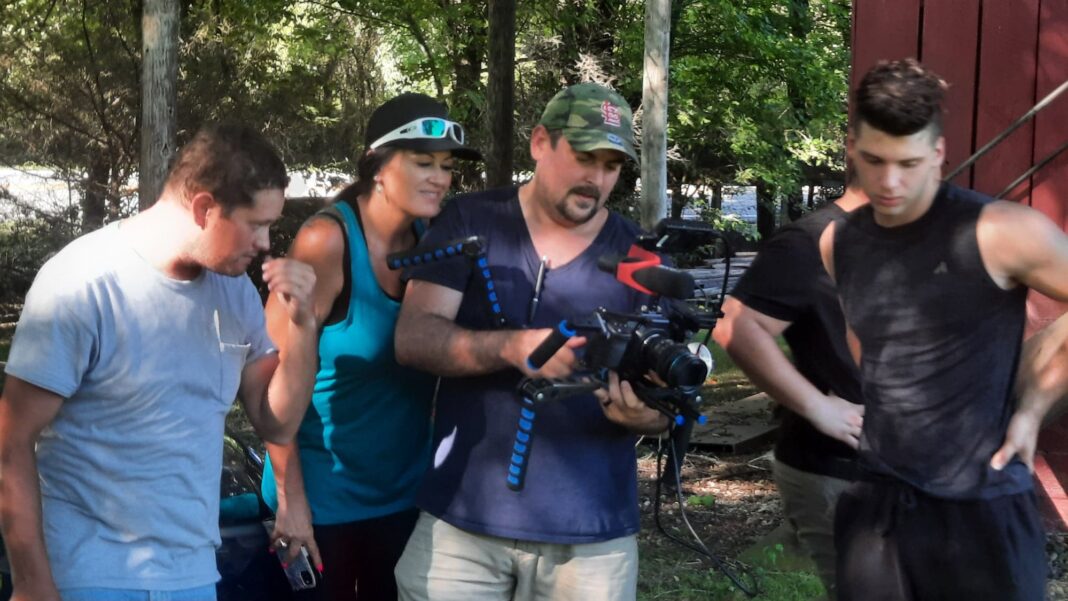 The Director of my upcoming feature film, Double Cross, David H. Ferguson (affectionately known as “Fergy”) was gracious enough to allow me to interview him. Our schedules didn’t align well enough to have a one-on-one interview, so I sent him a list of questions and he answered them in a timely manner. Without further ado, here is our interview about our latest film!

BW: Hello David! Thanks for taking the time for this interview!

DHF: No prob, thank you for having me.

BW: How long have you been making movies and what got you started?

DHF: Well, I’ve been making movies since I could lift my mom’s old VHS camcorder. I was probably 8 or 9 years old. But, when I officially started making movies I was finishing up High School, going into college. The reason that I started making movies was because when I was really young like 4 or 5 I watched all the Arnold Schwarzenegger and 80s movies with my grandpa. I loved the stories and action that was in Arnolds films. That’s when I knew I wanted to make movies and be a Director.

BW: What drew you to direct “Double Cross”?

BW: Did you have to adjust your directing style for the film?

DHF: Not much. I’ve done a few action comedies and fight scenes before, so that helped me with directing “Double Cross” while learning how to film the bigger fight scenes for the film on the spot. Plus, Braden liked my style of film making and that’s what drew him to ask me after he watched my film “Kick Hard 2”.

BW: What was it like directing all of the fights and action scenes?

DHF: Exciting and fun. It really was exciting to see professionals choreograph every fight and then make the fights look so good. I enjoyed every second of each film block from the fights to the dialogue. The shootouts were fun too and that raises the action bar.

BW: What can action fans expect from this film?

DHF: Action fans can expect everything. This film has fight scenes, shootouts, a good villain, the good guys winning and kicks. Lots of kicks from professional martial artists and Carl Rhonin, the stunt and fight coordinator. If you’re a fan of action, this film has it and more.

BW: Do you think working with legitimate martial artists (including a world champion) makes directing the action easier?

DHF: Yes. So much easier because these professionals didn’t only bring it they knew how to make it look epic and they knew their stuff. Like, knowing what the moves were called to how it needed to look. It was easier being behind the camera simply pushing the record button and not worrying at all during the shoot.

BW: Are there any more collabs between you and TKO Productions in the works?

DHF: Yes. FergusonFilmz and TKO Productions have a few collabs in the works after “Double Cross”. The next project is called “Dark Deal” and that film will be a bit darker than “Double Cross”. Super excited to start that one.

BW: Any projects of your own in the works?

DHF: Yes I do have several of my own projects in the works as well like my Resident Evil parody “Citizen Evil” and my fantasy comedy “BattleMage 2”. I’ve got a few short film projects as well called “Lady in the Chair”, a thriller horror.

BW: What was your most memorable moment while filming “Double Cross”?

DHF: Well, I really enjoyed the fight scenes, every fight scene was memorable to me along with the stunts from Carl Rhonin. Also, the stunt he did at the bunker where he fell down the stairs. Last thing I have to say was the ending of the film when filmed in a huge warehouse. I almost got lost in it a few times.

I want to thank David H. Ferguson for his time in doing this interview with me. For more updates on Double Cross and all other things action, Keep it loaded here on UAMC!