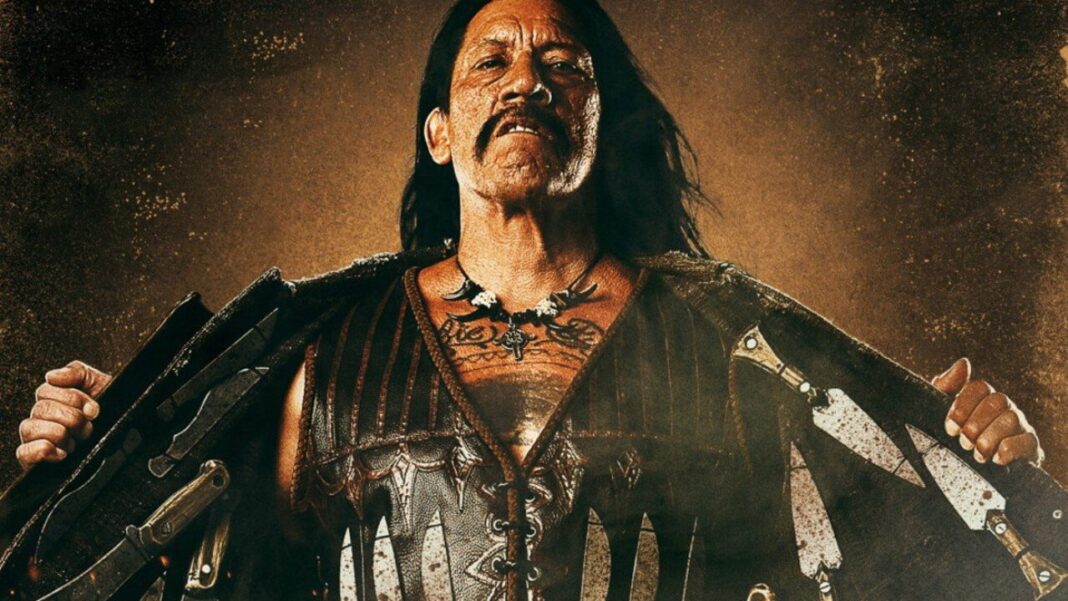 An ultimate ranking of the best Danny Trejo action films of all time!

Danny Trejo became a cult actor in the action movie world and beyond. After he spent a part of his early years in the criminal circuit, he turned his life around and got into acting. A couple of small roles in classics like From Dusk Till Dawn and Con Air put him on the map as a legitimate bad-ass.

Trejo seems to be non-stop working, and he is known for photobombing covers of a seemingly endless number of films where he usually delivered only an extended cameo. Our list is not about those films, but the ten best action bangers that gave Trejo the spotlight he deserved, and allowed him to shine as an ultimate action hero!

As so often in his career, The Night Crew saw Trejo in a supporting role, but it’s a pretty awesome one. A group of bounty hunters sneak into Mexico to bring Mae, who is on the run from Cartel boss Aguilar (Trejo) carrying a dangerous secret, to the US. Aguilar’s henchmen besiege the motel where the group is hiding, and the inevitable bloodbath follows.

It’s a simple setup, and while the siege scenario is not as suspenseful as in classics like Assault on Precinct 13, it manages to keep up the tension between the shootouts. The film looks good with gritty visuals, a desolate atmosphere, and a good cast besides Trejo that includes Luke Goss and Bookem Woodbine. The action hits hard with fierce gun play, and lots of blood being spilled. The Night Crew is a more than solid entry to the indie action realm.

Bad Ass wins the award for best title for a Danny Trejo flick, and demonstrated that no one wears a fanny pack with more style than Trejo. War veteran Frank Vega rises to fame when he defends bus passengers from a bunch of hooligans. Shortly after, his best friend is murdered, and Frank embarks on a search and destroy mission. Loosely based on a real life incident that went viral at the time, Bad Ass spins the story further, and becomes a light-hearted Death Wish clone.

And this vigilante – who beats the daylights out of every evil person he comes across – truly is a bad ass, but also a nice and caring chap. The film has some surprisingly moving moments, and simple, but effective humor. The finale is a serious WTF moment, when the bus chase from Red Heat is used as stock footage. But apart from this misstep, we can still enjoy the adventures of the “freaking geriatric kicking everybody’s asses”.

Traveling revenger Steve Austin takes it up against Danny Trejo and his biker gang. Ryan (Austin) arrives at the small town of Hope that is terrorized by Drayke (Trejo) and his goons. When Ryan kills Drayke’s brother, a rapist and murderer, the biker gang declares war on Ryan and the townsfolk. Even John Rambo was more talkative than Austin’s Ryan, but he pretty much nails the stoic loner trope. Trejo again is at the top of his villain game, as merciless tyrant with a hobby for torturing people.

Wherever Austin and Trejo go, violence goes with them. The action comes as raw hand-to-hand combat, we get a couple of nice explosions and a good old bar fight. The film does not try to hide its financial constrains by flashy visuals or hectic editing, but is calmly filmed, with a good flow and tension buildup, even though we know from minute one how it is all going to play out. Recoil is a simple but entertaining old-school actioner.

Robert Rodriguez’ treat for the youngest action fans molded the spectacle and excitement of classic genre flicks into a kid-friendly template, and introduced the world to uncle Machete (Trejo). Carmen and Juni embark on a quest to find rescue their parents – who are master spies –  from evil TV show host Fegan Floop and his army of Ninja Thumb robots. The children turn to their uncle, spy gadget inventor Machete, to gear up. But before borrowing his spy plane they need to endure a meaty meal with yummy pig intestines as the main course.

Spy Kids is vibrant and creative with fantastic set design and cinematography. The humor is great, all the actors seem to be enjoying themselves, and the action is colorful and totally over the top. Trejo shows some comedic talent, and his character was put center stage in the not so kid-friendly Machete films, that have become action classics for the parents!

The world’s toughest fanny pack enthusiast is back with his next entry into the geriatric action genre, and teams up with another Danny (Glover). Frank Vega (Trejo) runs a boxing gym, but one of his best students gets killed by drug pushers. Vega and Bernie (Glover), who owns the convenience store next door, go on an investigative rampage through town.

Trejo and Glover are pretty awesome as action buddies, they crash a college party, struggle with cell phones, and hook up with women one third of their age. They also kick ass like they are 30 years younger, dealing broken ribs and noses aplenty. The great Andrew Divoff indulges in another villain role, being meaner to his son and henchmen than to Frank and Bernie. The two Dannys even teamed up for a third entry to the saga: Bad Asses on the Bayou, a great finish for this awesome trilogy!

In 2008, the Death Race remake hit cinemas, a fun flick even though it was a tad too tame for its own sake. But with the sequels going straight to DVD the need to compromise on violence and sex was lifted! And with Trejo on board for part two and three of the saga they became modern B-movie masterpieces. All films have the same plot: car races to the death are organized inside a prison, each time at a different location and with different villains.

Trejo is the trusty mechanic of masked driver Frankenstein, and also knows how to take out the trash off the track. This wild mix of Mad Max, Escape from Alcatraz and Carmageddon delivers plenty of car action, dismemberment and nudity. The Death Race sequels are sleazy fun at its very best!

The Wild West got weird in this explosive shooter that saw Danny Trejo in another ultimate role as hellish avenger. Outlaw gang leader Guerrero is betrayed and killed by his comrades. He is sent to hell, and Lucifer offers to bring him back to the realm of the living for 24 hours to take his revenge. Trejo completely owns his role and goes into full bad-ass mode as merciless killer, piling up an enormous body count before his inevitable return to the pits of hell.

The film is aptly directed by B-movie specialist Roel Reine who gives his films a grindhouse vibe with a grim atmosphere and bloody violence bordering on splatter. The action comes almost non-stop in great style and variety. Chaos and carnage rule supreme in this high-octane actioner on a budget!

In the 1990s, Trejo’s best roles saw him in the bad guy camp, just as in this ultimate DTV gem. A group of prisoners escapes from a transport, and they barricade themselves in a shopping mall. Rudy (Mickey Rourke), former special operative and brother of convict leader Joe is sent to sneak into the building and take out everyone. This Con Air ripoff assembles an impressive group of mean people.

Trejo is part of this evil ensemble, and the most intimidating of ‘em all, a coke-sniffing, sadistic pervert and psycho killer. There’s tons of awesome action filmed in stylish slo-mo shootouts, and the camera always chooses a good angle to capture the damage done to humans and their surroundings. Point Break has no complications and no logic, it’s just all-out madness and a great throwback to the testosterone-laden classics of old!

Machete don’t text, Machete don’t tweet, Machete Kills! The first Machete film was already an explosion of action and slapstick humor, but Machete Kills is in overdrive mode every minute. Machete is hired by the US president to find a terrorist aiming a nuclear missile at Washington. During his search, he faces trigger-happy prostitutes, a many-faced assassin, and a clone army of martial arts warriors.

Machete Kills bears all the trademarks of the first movie, but this time we don’t get a cohesive plot, but just crazy action that comes almost non-stop. There are many glorious moments such as Machete hanging on a rotating helicopter blade while chopping off his enemies’ heads. Machete Kills is another blast from Trejo and Rodriguez, and we’re still waiting for Machete Kills Again – In Space!

With Machete, Robert Rodriguez built a monument to Danny Trejo’s bad-assery that secured him everlasting cult status among action movie fans. Mexican Federal agent Machete is betrayed during an operation, and left for dead. Some years later, he is hired to kill a Texas State Senator. Things go terribly wrong, and Machete needs to free himself from the web that his enemies are spinning around him.

Machete is a charming bad-ass that calmly eats a burrito while crushing an opponent in a fistfight, and is also pretty good at escaping through windows using his opponents intestines as a rope. He cuts everyone to pieces who gets in his way, and makes love to every woman he comes across. Despite its crazy escapades the film has a pretty good plot that revolves around the many problems occurring at the US American/Mexican border, and does not shy away from taking sides. Machete is a riot of a movie and an ultimate action classic!