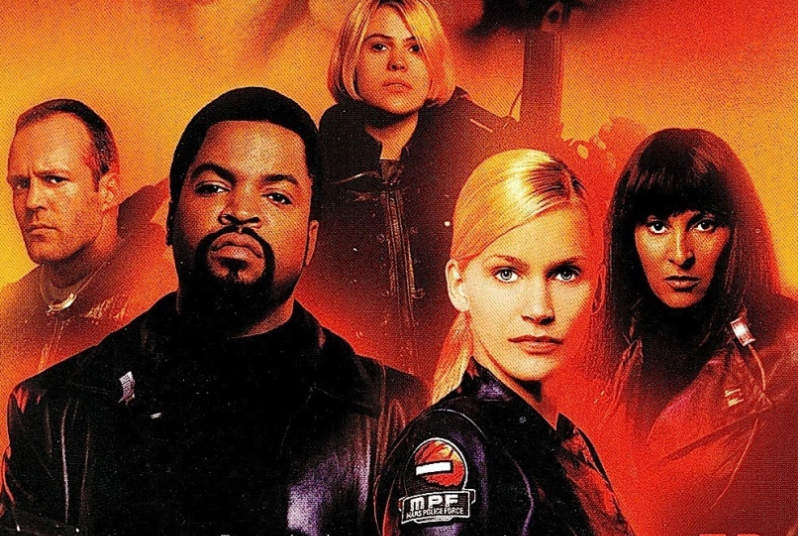 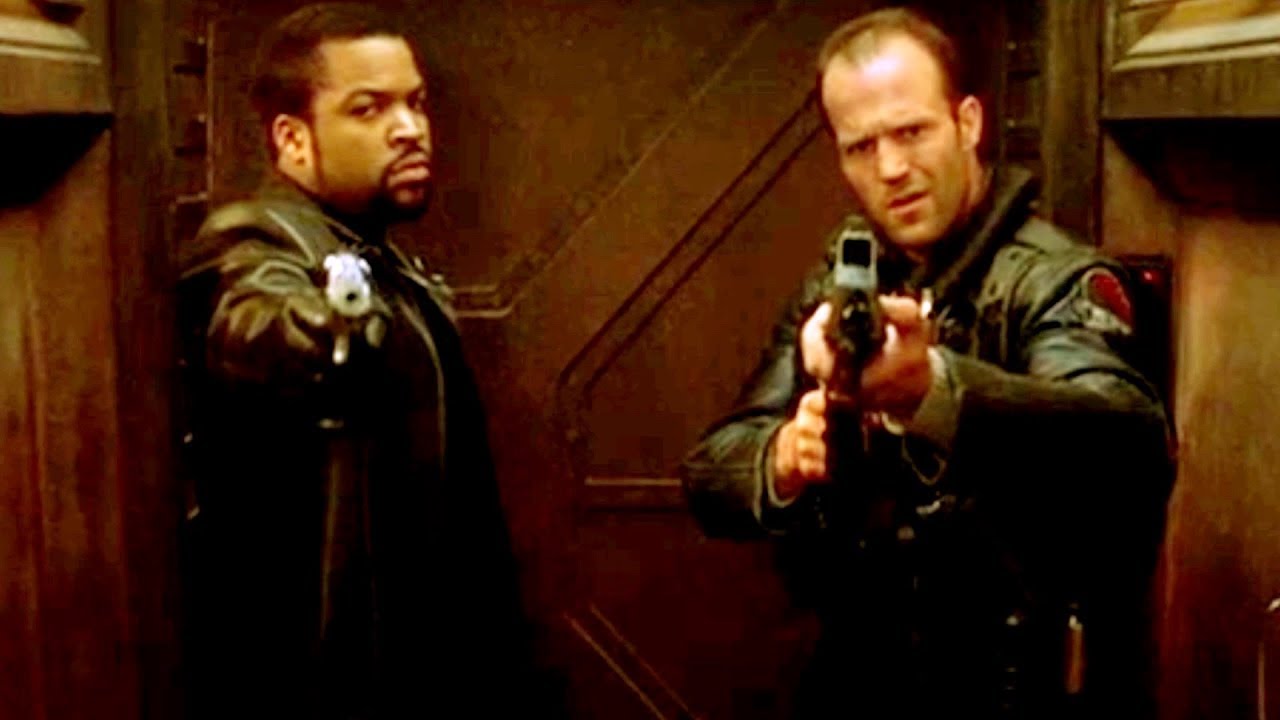 John Carpenter is one of the undisputed ultimate masters of modern genre cinema. His career as a director spanned four decades, and in 2001 he created his preliminary swan song Ghosts of Mars (even though he took a few small jobs in the years after). He stated that he got burnt out, and decided to stop making movies, “happily playing video games and enjoying myself”. Together with Escape from L.A. and Vampires, Ghosts of Mars could be seen as the final part of a farewell trilogy of sorts with a lighter and more campy tone than many of his previous works.

Ghosts of Mars was originally planned as a sequel to Escape from L.A., but after that one did not do well at the box office those plans were scrapped, and a stand-alone movie was conceived. Ghosts of Mars unfortunately also was a financial flop, but I’ll argue in this article that it has a lot to offer for action fans and should not be overlooked!

In the future, Mars has been colonized by humans. Melanie Ballard is member of a police squad that is own its way to a Martian mining village to pick up “Desolation” William, a high-profile criminal. The town seems deserted upon arrival, but soon they realize that the new inhabitants are ghastly creatures with a thirst for annihilation of all humans.

The film is filled with “Carpenterness”, and many themes from his previous movies make a return. A group of cynical anti-heroes (Escape From New York) are under under relentless siege by a violent mob (Assault on Precinct 13) in an isolated place (The Fog) with an invisible enemy in the midst of the group (The Thing). And just like in many of his other films, there are a few hooks that could have expanded into social commentary territory, but which are not pursued further this time.

The setting features a Sci-Fi dictatorship of the more unlikely kind (a tyrannical matriarchy), so there’s no political context this time. Other aspects such as the capitalistic greed of digging too deep, a drug epidemic, and heedless occupation of frontier territory are touched upon, but stripped of relevance for the largest part. It may be easy to say Carpenter failed in this respect compared to films such as Escape from New York and They Live that had a strong political sub-theme. But maybe he just wanted to put some uncomplicated fun on the screen this time. In Ghosts of Mars, subversion gives way to silliness, and there’s plenty of awesome and crude one-liners going around.

The story is straightforward, told without much fuzz at a good pace, and Carpenter succeeds in creating an interesting world that gradually reveals itself. He also managed to drum up a nice ensemble cast, a badass soldier gang with badass weapons who love to shoot things and exchange profanities. Species star Natasha Henstridge leads the pack and is pretty awesome, as are a pre-superstar Jason Statham, and a hard-as-nails Ice Cube.

The film has simple, almost minimalistic sets that ooze the vibe of both 1950 Sci-Fi flicks and Wild West ghost towns. A couple of scenes were made with miniatures, and some backgrounds look so coarse as if they were matte-painted, it all looks old-school awesome! The editing, especially in the action sequences, seems a bit off occasionally, but it just enhances the B-movie feeling. And Carpenter created a killer soundtrack once again (at least if you like shredding guitar sounds) this time by collaborating with Heavy Metal legends Anthrax and Steve Vai. 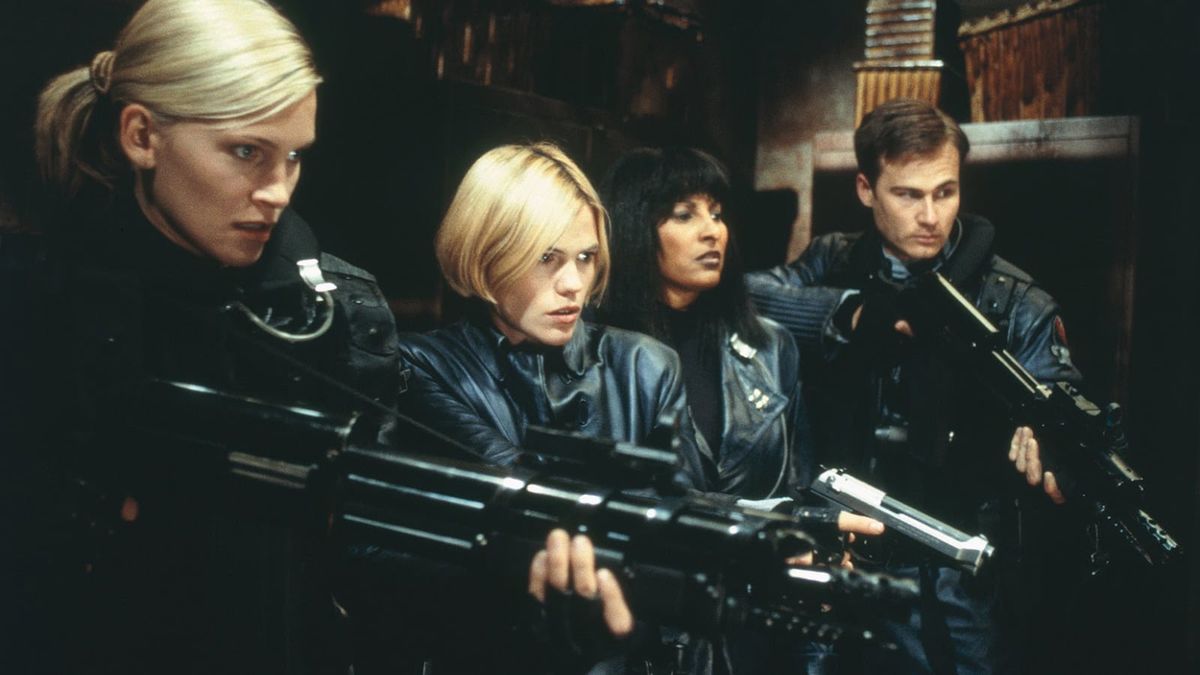 With the action, Carpenter takes no prisoners and may have created his most violent film, at least the body count is well above that of any movie he made before. Enlisting the (in)famous KNB EFX group for the practical effects results in an overabundance of blood and body parts being thrown around. Self-mutilations of the possessed miners are frequent, as are beheading by thrown saw blades, and subsequent display of the severed heads on pikes.

The unfortunate police squad endures a few skirmishes in the first half against both human and inhuman adversaries, but chaos and mayhem completely take over the second half. The savage mob of disfigured and possessed miners burns everything to the ground, and every two minutes something explodes. For the action sequences, Carpenter drew plenty of inspiration from classic Western themes, with shootouts on Main Street, a jail sequence, and a showdown in a running train with a crate of dynamite.

Ghosts of Mars earns the “100% Carpenter” quality seal, even though it may be fair to say that it is one of his lesser achievements. But even a half burnt-out Carpenter was still able to create a film full of excitement, a wild genre mashup that never fails to entertain. Carpenter himself stated that the film was intended as a parody of sorts, and that may explain why some scenes feel as if they are missing the mark, but the whole film may actually be one giant practical joke he’s playing on the audience. As far as films go taking place on Mars, it’s no Total Recall, but in the genre of Sci-Fi action horror Westerns Ghosts of Mars takes the top spot!