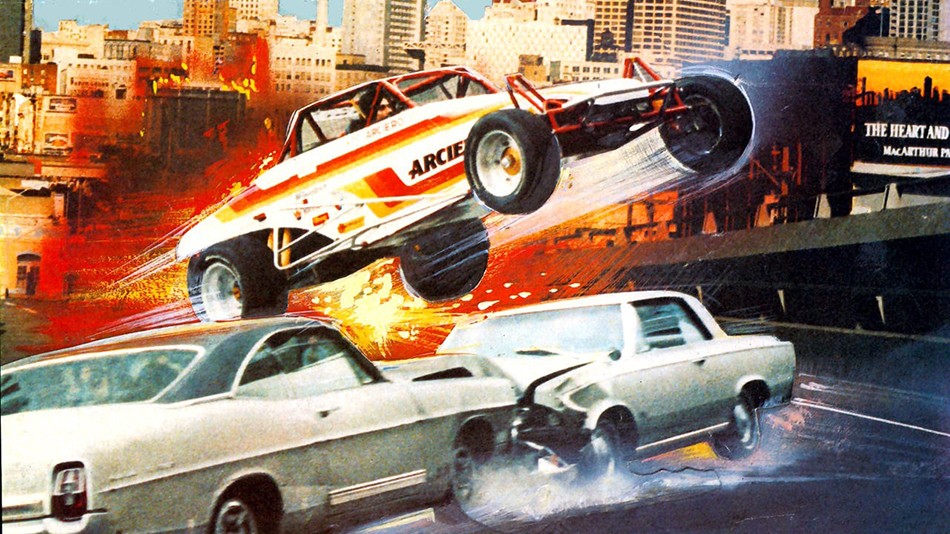 It only happened once, folks. One of the greatest practitioners of Italian action cinema, Enzo Castellari, teams up with master thespian Erik Estrada (CHiPs) to bring us the criminally underseen gem of action that is Light Blast.

In an isolated railyard a van with a broadcasting antenna pulls up and points a laser gun at a large digital clock. The laser beam destroys the clock, and the heat from the explosion is so intense it melts the chain link fence and rail cars near the clock, including a young couple who made the unfortunate choice of climbing into one of those cars to have sex.

Across town, a pair of psychopaths have rounded up the employees of a bank and are demanding money, safe passage, and food. And to let San Francisco Police know that they’re serious, they shoot a security guard dead right in front of the news cameras. The passage and money are going to take some time, but the food arrives fast enough.

Ronn Warren (Estrada) arrives in his underwear, as per the criminals instructions, to make sure he’s not carrying weapons, and holding a tray with a cooked turkey and fries. Suspicious of poisoned food, one of the psychos orders Ronn to taste the food. Ronn reaches into the turkey, pushes a hidden gun through a slit in the turkey meat, and shoots the psycho in the forehead.

And just like that, in a matter of minutes, Light Blast has established our protagonist and antagonist in their respective habitats, and the narrative cuts back and forth between them, moving them closer to each other in a final confrontation. The narrative moves along like a police procedural, but has an ending that feels very much like a Western showdown.

Enzo Castellari had been to San Francisco a few years before–briefly–to shoot some establishing scenes with Franco Nero for Day of the Cobra before taking the rest of the production back to Italy. (I’ll cover that movie soon.) Light Blast is entirely shot in San Francisco, and the city is as much a character as Ronn and Dr. Yuri Svoboda (Ennio Girolami.) Through a number of scenes we see the Oakland Bay Bridge and Coit Tower in the background. And a crucial action scene takes place in Mare Island’s drydocks, featured many times in the show Mythbusters.

Watching this film I’d say Castellari not only has a keen eye for action–and possibly no concerns over consequences from dangerous stunts–but good casting instincts. Erik Estrada ably carries this movie, giving his all in the action sequences, and owning the scenes of Ronn’s investigations with an easy charm and screen presence.

I can’t remember how I discovered this film, but I was blown away by the fact that Castellari had made a movie with the guy from CHiPs. But the time Estrada spent in that show paid off. He’s very believable not just as a police detective, but as a spiritual descendant of Dashiell Hammett’s Continental Op. A line of errant knights of justice that continues through Sam Spade, Philip Marlowe, Mike Hammer, Popeye Doyle, and Travis McGee. (And a more recent descendant is Jack Reacher.) 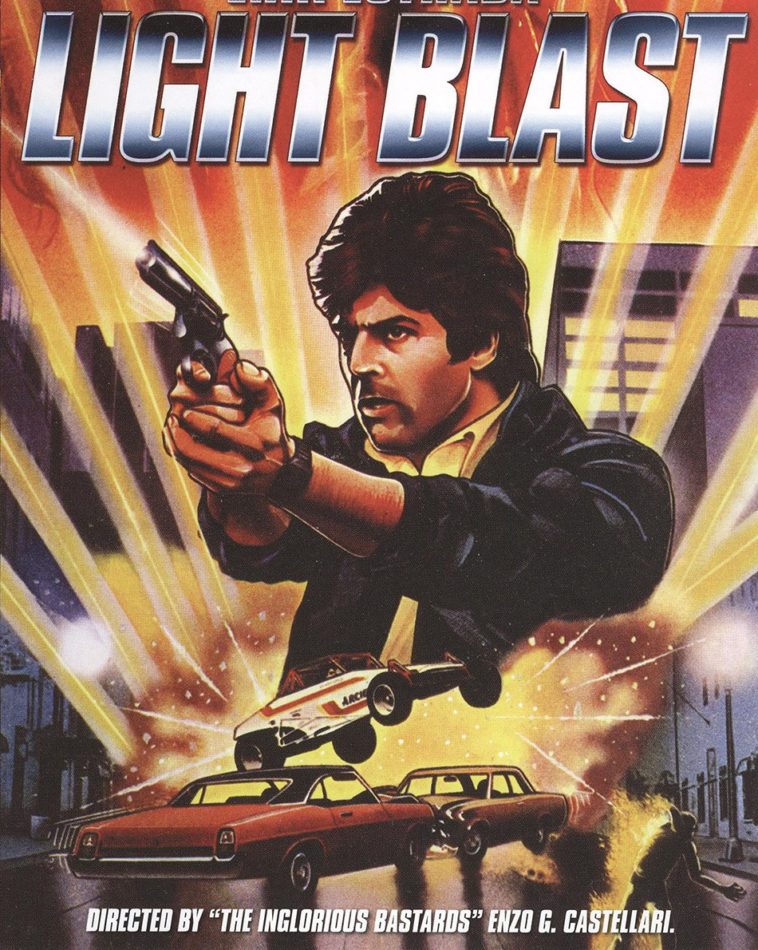 Ronn lives on a boat, and has a devoted wife, but he always looks most natural when he’s on the hunt for something or someone. At the crime scene he ponders the evidence the lab boys share with him, but it’s not until a second attack from Dr. Svoboda’s laser and a demand for 10 million dollars that Ronn can see a pattern to start working from. The film balances the story aspects of the police investigation with incredible action sequences in a way that feels effortless and natural.

Clues lifted from the crime scene lead Ronn to a place, where action happens, where more clues are found that take Ronn to a new place. In a smooth and efficient manner we learn about Svoboda’s doom ray, and the Doctors intentions with it. (A high frequency laser that excites the molecules in the liquid crystal displays of clocks, releasing enough energy to melt the entire city of San Francisco, which Svoboda will do if his demands aren’t met.) And we learn of the Doctor’s past as a brilliant but reckless professor and researcher, embittered over his dismissal from the University of San Francisco following an accident in the laser research lab.

From these pulp elements Castelli and his co-writer Tito Carpi craft a lean story that is supported by a solid performance by Estrada, and skillful camera work and editing. When it’s time to investigate, we learn new things along with our hero without being weighed down with info dumps. When it’s time for action, we are treated to some spectacular action sequences, complete with car explosions and shootouts.

The IMBD entry for this film states that no less than 8 stuntmen were injured making this film. After you watch the movie, you’ll believe it. There’s no visible character development, but Ronn is more archetype than character. He moves through a landscape he’s very familiar with, acting as a shield against the forces of chaos through a defined set of characteristics. Though Light Blast is shot in the United States with an American actor as its star, it has the vitality that is distinctive of Eurocrime.

Italian genre films are known for their soundtracks, and this one is no exception. Horns, percussions and synth scores fade in and out through the movie’s running time as the action peaks and dips in intensity and we roll to the final showdown, where Svoboda makes the fatal error of wearing a Casio wristwatch. (Understandable. A methodical, calculating man like Svoboda would use a reliable watch, and who didn’t own a Casio back then?) 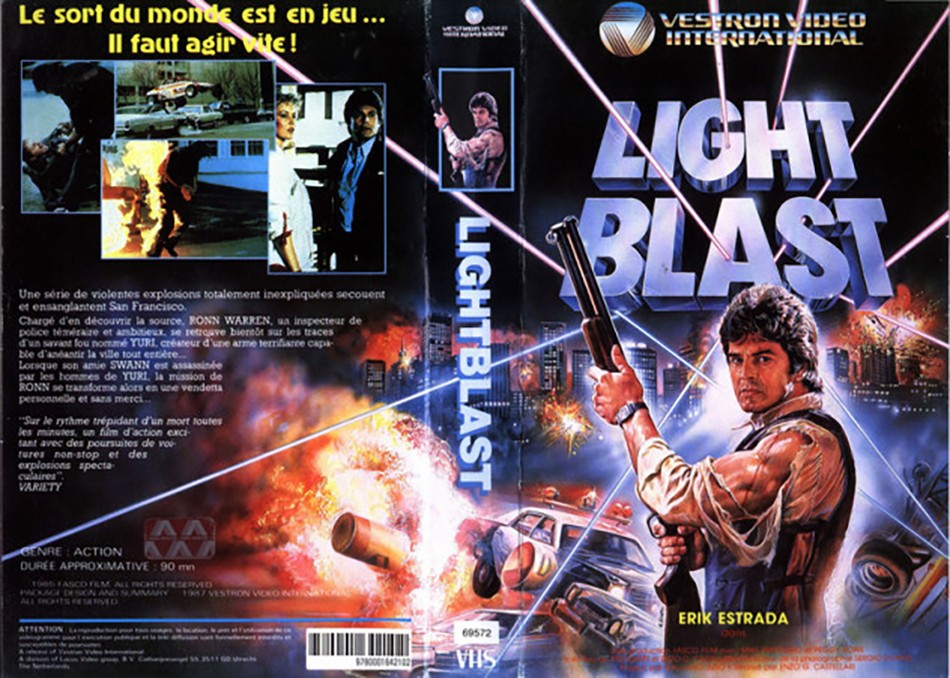 Light Blast is an entertaining and suspenseful film, featuring a propulsive score, and face-melting practical effects approaching the quality of the ones seen in Raiders of the Lost Ark. But I get the feeling that not enough people have seen this film, and that needs to change! If you still need another endorsement, the VHS cover art for this film that I found on the internet shows the Vestron Video logo above the art. 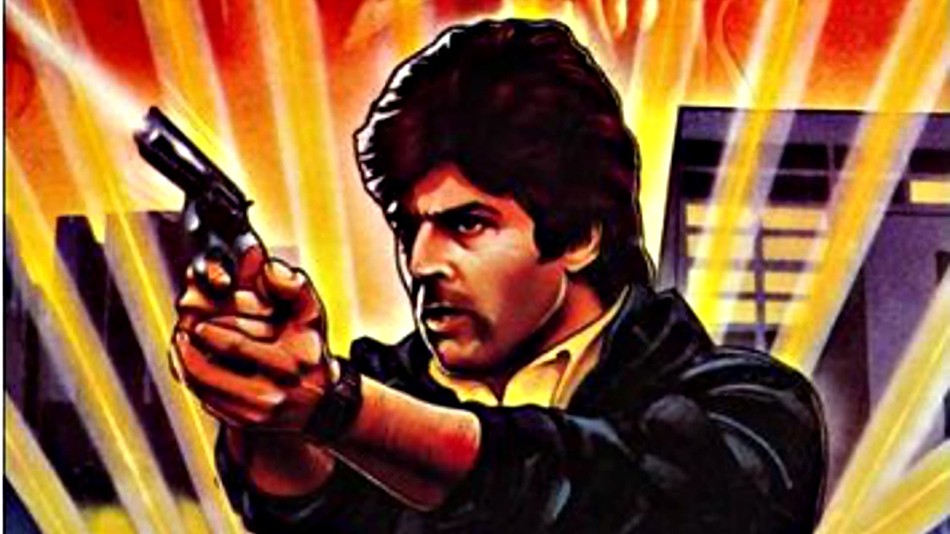