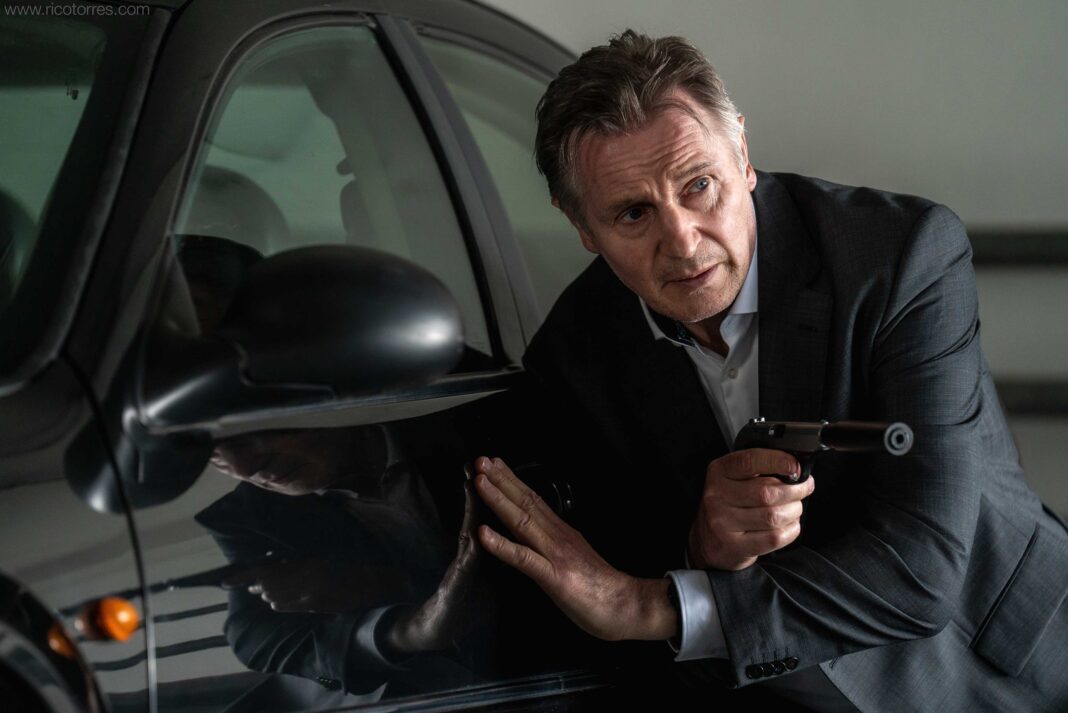 Another Liam Neeson film takes us to the inevitable “Do we need yet another Liam Neeson action flick?” question. I don’t dare to answer that question because, while I am well aware that theatres have been bombarded with these kinds of productions lately, I can’t say I don’t enjoy them although I never saw anything out of this world with them. Until now.

The fact that Memory is directed by the man behind GoldenEye (1995) and Casino Royale (2006) makes it special, along with the fact that the Irish actor is not playing just another action hero but an Alzheimer’s sufferer, which gives an interesting twist to a story Dario Scardapane has adapted from the 2003 Belgian production The Memory of a Killer, itself based on the 1985 book by Jef Geeraerts.

The story was moved from Antwerp to El Paso, Texas, with brief scenes taking place in Guadalajara and Mexico City. This way, assassin Angelo Ledda became Alex Lewis, played by Neeson; and police officer Eric Vincke became FBI agent Vincent Serra, played by Guy Pearce and sharing most of the film’s protagonism with the assassin. Far from a cat-and-mouse game, the paths of Serra and Lewis will cross when Lewis decides to call off a contract: Beatriz León (Mía Sánchez), a 13-year-old victim of sex trafficking exploited by her father (Antonio Jaramillo). Serra, on the other hand, was one of the three agents who rescued Beatriz from the claws of her father and made sure she was relocated from a processing facility to a safe house for witnesses.

Turning against his employers, Alex avoids bullets and explosive devices below his car and goes for the head of William Borden (Daniel De Bourg), eventually getting to get to the person who wants Beatriz dead: Davana Sealman (Monica Bellucci), a real estate tycoon trying to put away anyone who could link her son Randy (Josh Taylor) to a ring of child prostitution which involved the abuse of this girl. 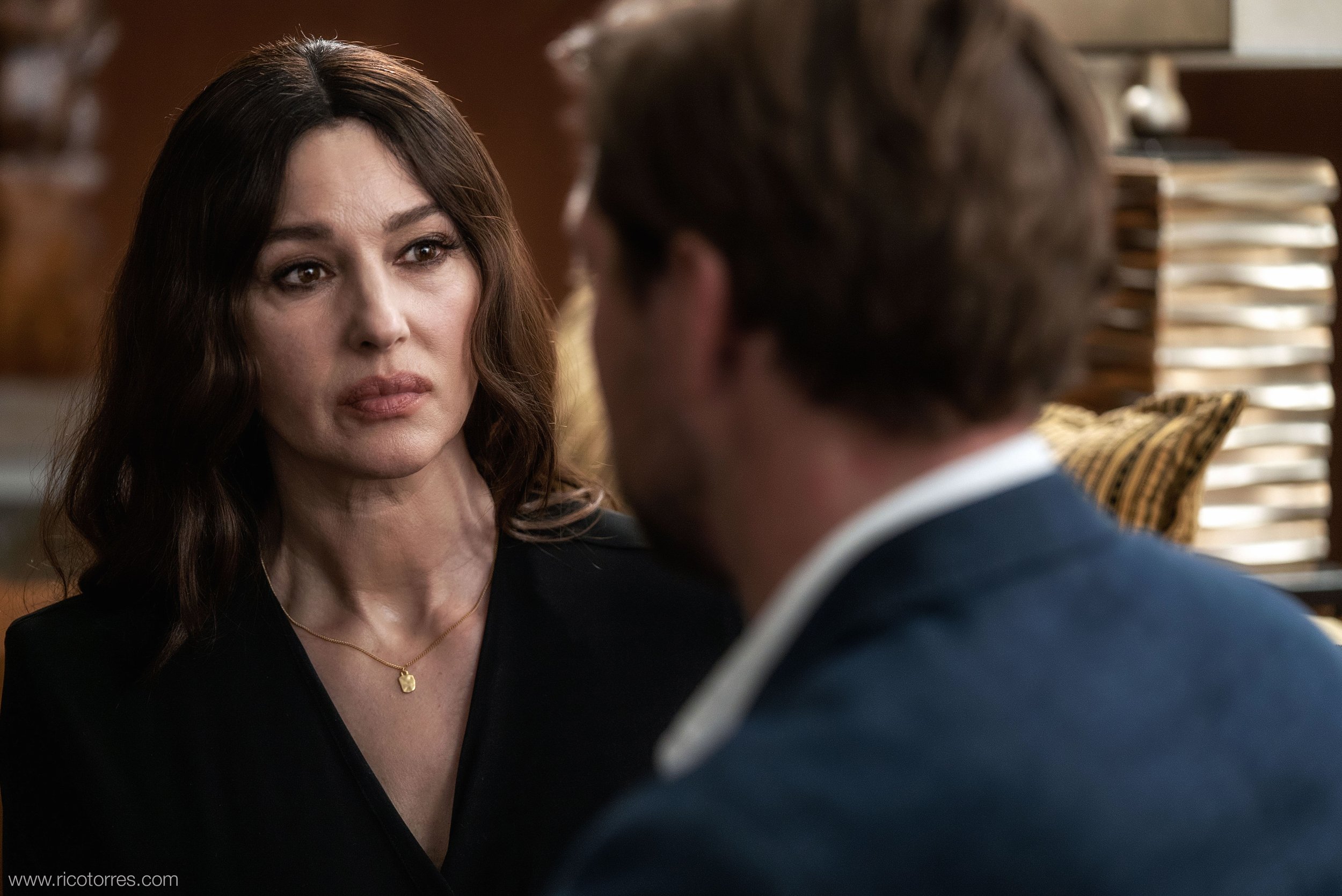 Apart from being the remake of a previous production, Memory shares many things with the 2010 film Edge of Darkness: the most obvious one is the setting in the United States and the elements of the crime genre that Campbell handles very well since the days of Criminal Law (1988) and Defenseless (1991). Both Mel Gibson’s Detective Craven from the Warner Bros production and Lewis are characters (in different sides of right and wrong) with a bidimensional life which abruptly changes after a tragic event makes them seek justice by their hand, particularly when justice is too slow or turns a blind eye when it comes to dealing with powerful people. Both are tragic heroes affected by illnesses: Craven was irradiated, Lewis’ memory loss is every day increasing, but both of them want to make the guilty party pay before their time is due. In another connection to Edge of Darkness, Bellucci’s character is a wealthy, powerful woman with a hidden agenda much like Danny Houston’s Jack Bennett was in the 2010 film.

Neeson plays the role of an Alzheimer’s sufferer brilliantly, going from his slight omissions like ordering a cold tea that has been just served to life-and-death situations like forgetting to ensemble the firing pin on his handgun or where he left evidence incriminating his handlers. The occasional stammering as his character evolves (or devolves) is also touching enough to make us feel sorry for him, even when he is a contract killer and clearly on the wrong side of the law: “I want to think you’re a good man, Vincent. I’m the bad man, I’ve been for a very long time”, he tells the FBI agent who goes after his clues slowed down by the impediments of his superiors Nussbaum (Ray Fearon) and Mora (Ray Stevenson), wary of touching Bellucci’s character.

Pearce’s greasy hair, tired eyes and grizzled moustache are the perfect testimony of a man who has seen too much in the line of duty, in contrast to the much younger, fresher police officer from the Belgian production. Monica Bellucci plays to perfection the role of a humanitarian who, in the words of La Rochefoucauld, uses humility as the biggest form of conceit: we see her on the phone insisting that a donation she is making must not be publically credited as she passes a framed picture of herself with African kids shortly before discussing a contract to kill a little girl. Her obsession with ageing also gives her a flair of grandeur, a link to Sharon Stone’s character in Catwoman (2004) combined with the self-sufficiency and contempt for others that Meryl Streep had in Devil Wears Prada (2006) only that with a bigger sense of perversion. The fact that Bellucci’s face looks particularly wrinkled in this film helps to accentuate the idea of a woman who resists getting old and envies her Abruzzese grandfather who lived to be 104. 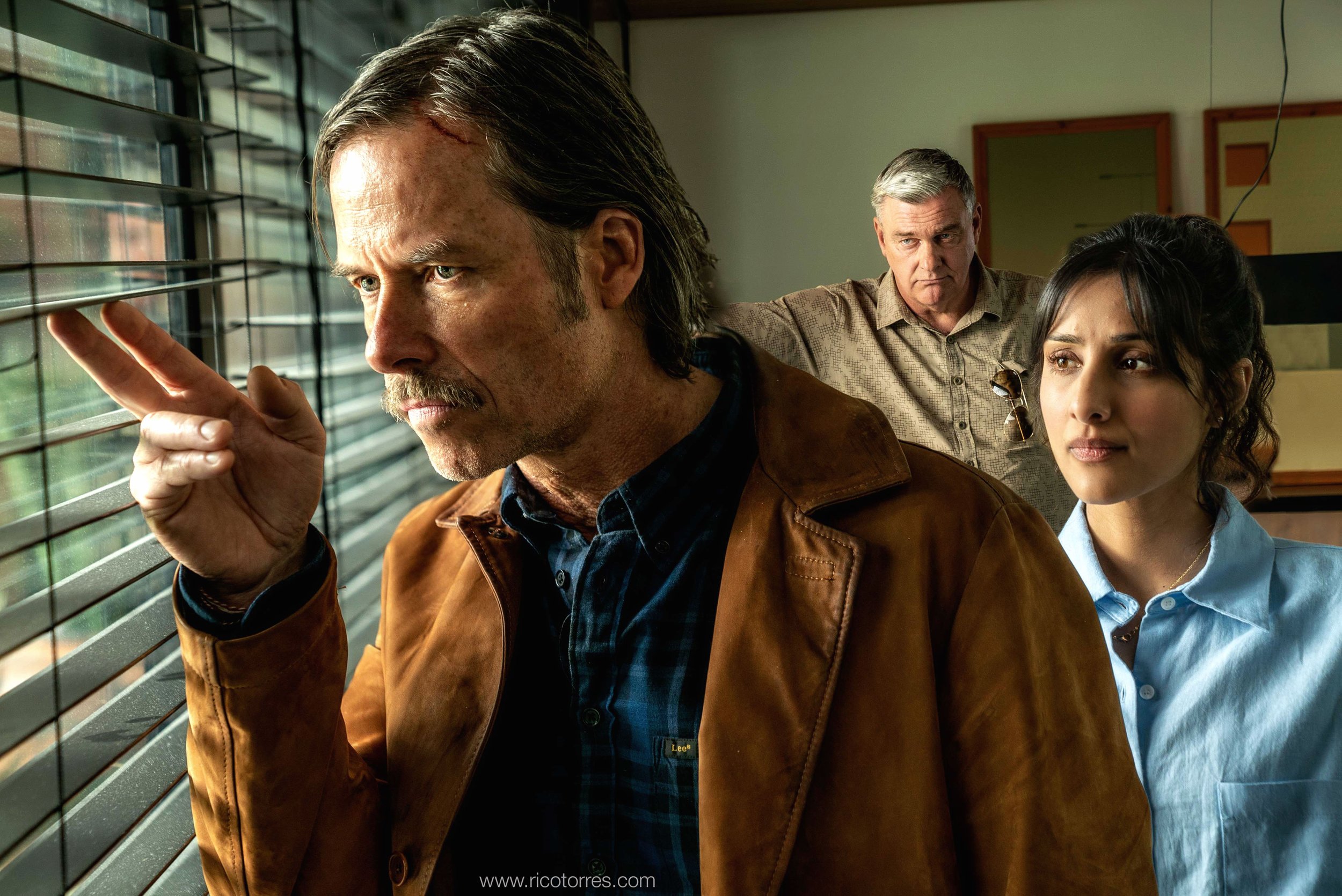 The rest of the cast also stands out, particularly Harold Torres as Mexican police liaison Hugo Márquez, a young officer concerned by the situation Beatriz went through and the one character that will give us a surprise that will leave us with our mouths open before the end credits roll. Natalie Anderson’s short screen time as the playful, devil-may-care Maryanne Borden is also worth mentioning, for her facial expressions and sweet voice. Mía Sánchez makes a captivating performance as the young, fragile Beatriz, caught in the middle of a past of abuse and trafficking, a web of bureaucracy and the hope for a better future. A look from her pleading brown eyes as Lewis has her at point-blank with his weapon is enough to make the assassin change loyalties. 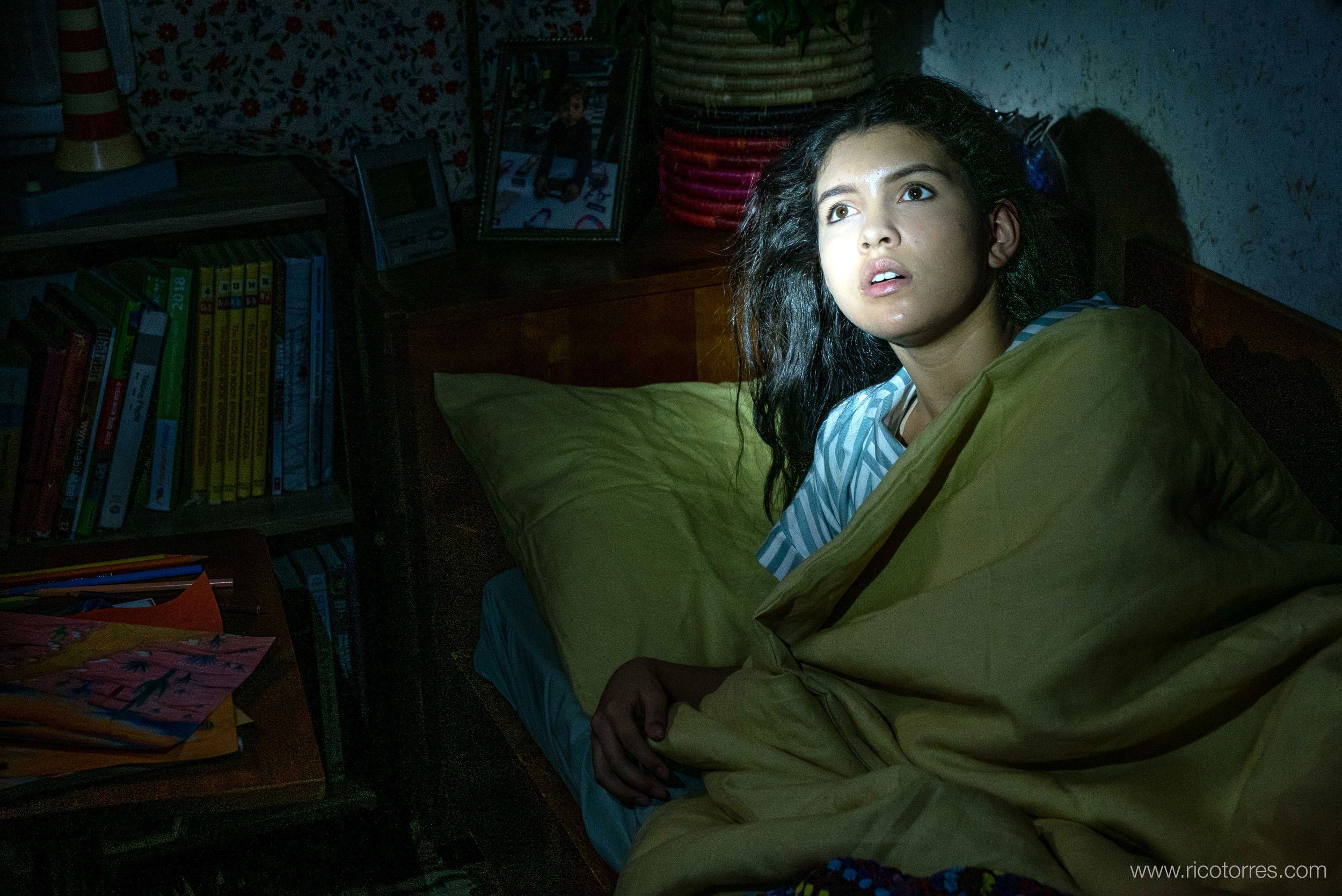 Memory has swift pacing and it goes to the point, something The Foreigner (2017) and The Protégé (2021) lacked at times. Under Campbell’s instructions, editor Jo Francis checked the footage with him every day to look for things to be shortened or polished. The result was the symmetrical balance between drama and action, something lacking in most movies today.

Alex’s background story concerns a murky relationship with his father and an older brother who can’t even speak under the effects of Alzheimer’s, a situation where he’s basically looking at his future self when he visits him in an El Paso hospice; Vincent is affected by the loss of his wife and child, which has given him a sense of duty few officers have. There is also the case of Márquez, still hurt by the myriad of countrywomen that got murdered by local gangs he couldn’t save, and even the antagonist herself, Davana, who tries to protect her perverted son from the hands of justice at all costs. All these stories are explained in a way they can sink into our minds and hearts and they never get to cloud the current events of the film with unnecessary distractions.

Cinematographer David Tattersall, in his fourth collaboration with the director, brings back his trademark panoramic tracking shots, particularly as Alex travels from Mexico to Texas in his car. There is even a slight nod to his work on Die Another Day as the camera flies through a waving American flag to take us to an establishing shot of El Paso, resembling the camera movement he did in the 2002 production with a North Korean flag in the scene where James Bond and Zao are exchanged at the Demilitarized Zone. Campbell usually pays a great deal of attention to colouring and lighting, and Tattersall delivers: examples of this are a shot of Neeson holding his silenced weapon as he watches a videotaped act of abuse against a minor, with sheds of light illuminating his horrified and angry face in the darkness of his hideout; or the beams of light illuminating the swimming pool of Maryanne Borden which gives the scene a sensation of peace and luxury, or the bright golden tones in Sealman’s offices at night, with a window letting us see the Texan skyline. 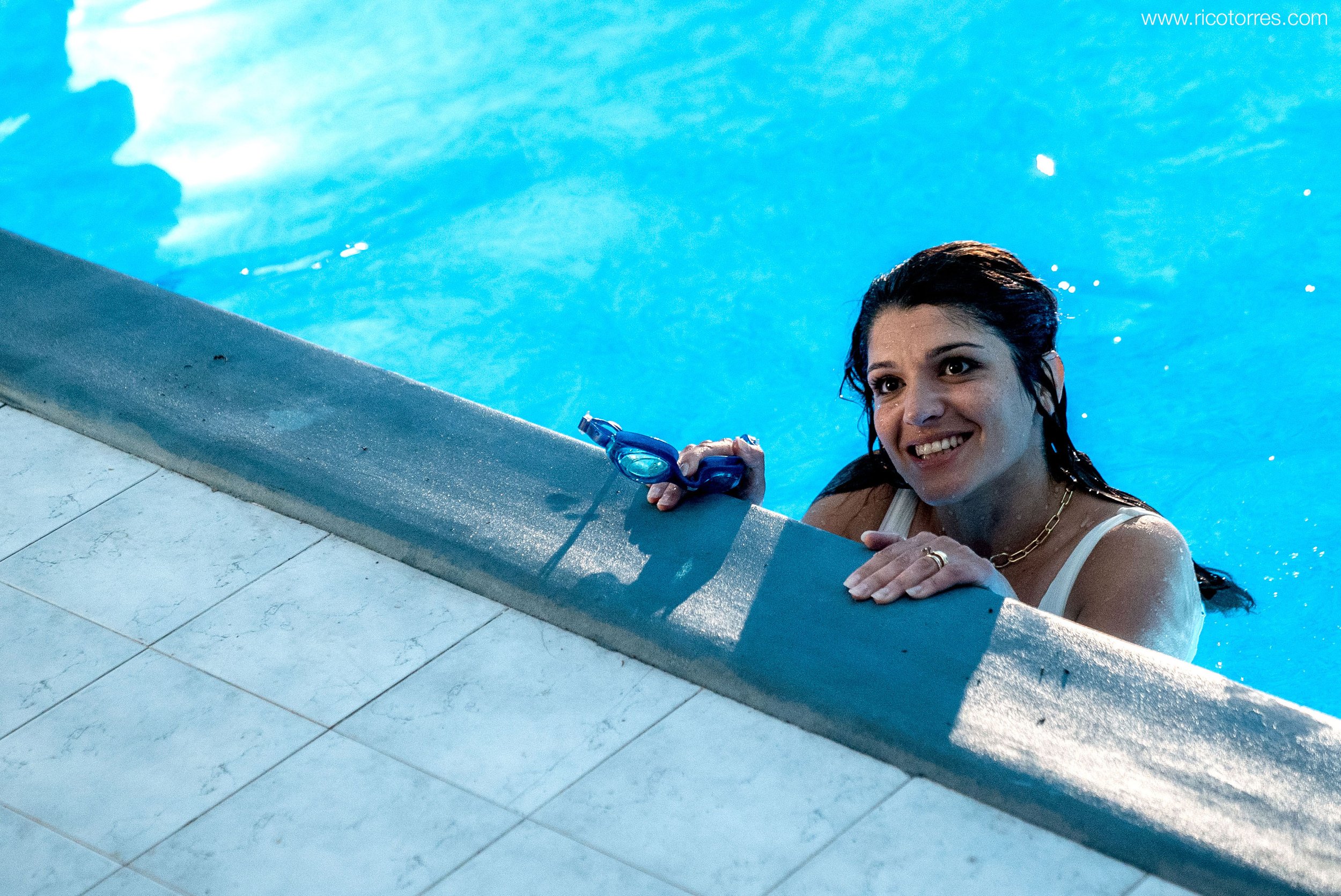 Another of Campbell’s frequent collaborators, production designer Wolf Kroeger (Beyond Borders, The Protégé), makes a stark contrast between two different worlds taking place in the same region: from luxurious hotels, offices and chalets to run down brothels, darkened and dirty abandoned stores and the coldness of a police interrogation room. Coming back from The Protégé, composer Rupert Parkes (Photek) combines industrial, downbeat sounds with notes of Spanish guitar for the scenes set in Guadalajara or to underline the emotional weight of Beatriz’s story.

Memory follows the guidelines of “a Liam Neeson action flick” with big twists and an already interesting premise, but the fact that Martin Campbell is directing it gives it a special flavour: it is exotic, compelling and dark at the same time. Alex Lewis is no James Bond, but one can swear many of the shots of him holding a silenced gun are clearly Bond-inspired along with the fact one of the characters orders a Vodka Martini. The fact that the film’s title for this version was shortened from The Memory of a Killer to simply Memory may sound commercial, but on second thought it invites the viewer to discuss how important is that word in the plot of the film: the leading character is losing his memory, saves valuable evidence on a memory drive, and the detectives depend on the assassin’s memory to bring the guilty party to justice. It is even more fascinating the fact that Serra tells Alex that “memory is a mother*cker” when it comes to identifying suspects, something (perhaps involuntary) tied with the earlier minutes of Criminal Law where Gary Oldman’s character, a pedantic lawyer, saves his murderer client by alleging the witness’ recollection of facts may not be accurate and end up sending an innocent man to prison.

In the end, Memory is a solid cocktail of action, drama, fury, justice and redemption where every portion is blended with the precision of a filmmaker whose name is already a synonym of quality.

Memory is now playing on theatres and at home on demand. Visit memorymov.com for more information. Read my book The Films of Martin Campbell: Bond, Zorro and Beyond (2020), available on Amazon.