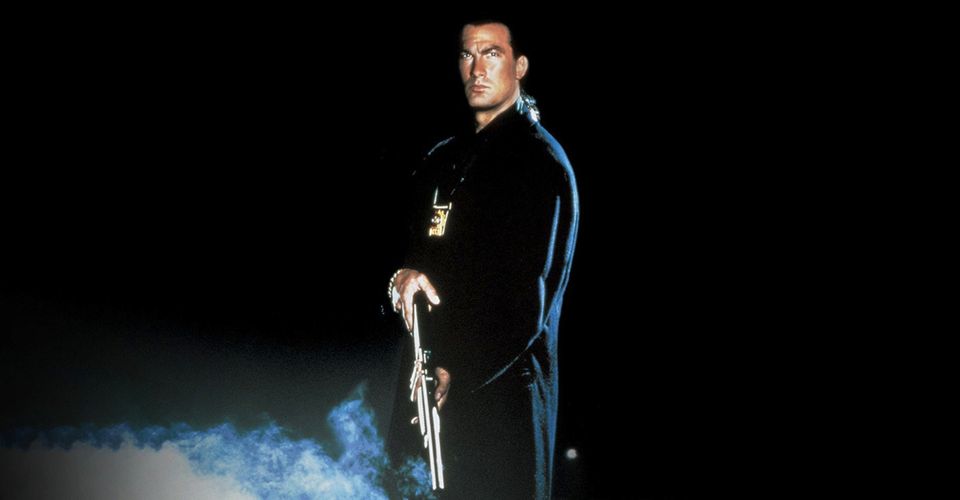 The high water mark for Steven Seagal’s ultimate action movie career is without a doubt OUT FOR JUSTICE (1991).

Steven Seagal had a successful career in the crowded market for action movies in the 1990s. He distinguished himself from other action stars by being an expert in the Japanese martial art Aikido. When watching it on the screen it seemed to be a more elegant and seemingly effortless way of defeating opponents compared to the impact-based fighting techniques in most American action movies. In addition, he created an on-screen persona that remained unchanged in almost all of his movies, which is characterized by an attitude of constant superiority and righteousness, and complete invincibility when engaged in combat.

Currently he is mostly being known for making one bad movie after another, eccentric behaviour and numerous accusations of sexual misconduct against him. I really want to put these things aside for this article, and go back to a time when a new movie starring Steven Seagal was something to look forward to. And I will argue that from this period Out for Justice (released in 1991) was his best movie.

In Out for Justice, Seagal plays Gino Felino, a Brooklyn police detective. One day the petty criminal and drug addict Richie goes mental, and embarks on a rampage together with some of his goons. When his partner Bobby is killed by Richie in broad daylight, things get very personal for Gino. His manhunt for Richie is framed by a sentimental journey through his neighborhood that includes childhood memories and reconciliation efforts with his ex-wife.

Out for Justice was Seagal’s fourth movie, and he was moving towards the height of his career at the time. His first two movies, while being more than decent, were still a bit clunky both in terms of direction and how Seagal presented itself. These things improved considerably with his third movie Marked for Death, while also cranking up the amount of carnage significantly. Then he made Out for Justice.

After that came the Under Siege movies and On Deadly Ground, which were his biggest productions. In those movies he had to share considerable screen time with the villains, and the display of his fighting skills had to take a back-seat more often to shoot-outs, explosions and other large set pieces. When taking all these things into account, Out for Justice and Marked for Death can be considered to hit the “sweet spot” for Seagal’s movie career, I believe.

Seagal in all his Aikido Glory 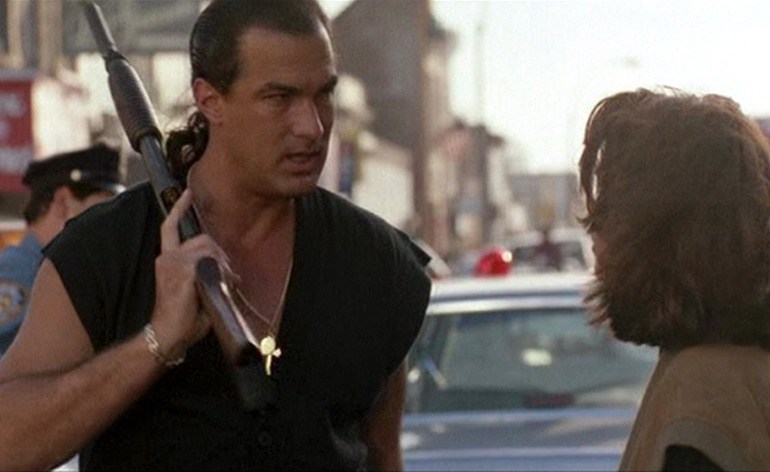 Out of Justice is completely focused on Seagal, he is in almost every scene. If he’s not, then we get to follow Richie’s exploits. Seagal’s character Gino is pumped up all the time, even when trying to talk friendly to his son and ex-wife. In between intimidating and beating up people he gets to play the emphatic macho with his heart at the right place. He likes to play baseball with his son, but duty gets in the way, of course. He also tells a couple of colorful stories from his childhood when growing up in Brooklyn.

He is extremely patronizing to everyone he interacts with in the movie, and sometimes one may wish that he would just shut up. It never gets really irritating, though, and his larger-than-life behavior only helps to elevate the entertainment level of the movie, and I mean that in a good way. One other noteworthy item is Gino’s outfit when on duty. His guerilla-style shirt and cap may be his take on being an police officer in the urban jungle, that’s the best I can make of it.

The action scenes is where the movie really shines, of course. They are mostly contained to small skirmishes where Seagal cripples his opponents with his Aikido skills. The combat sequences are quite brutal occasionally, and Gino creatively uses his environment and improvised weapons to maximize the damage done to people. There is also a bar fight scene, and I believe it is one of the best action sequences you will find in a Seagal movie. It’s not very fast-paced or even overly violent. He just walks around, pushes and punches people, throws insults, and owns the place with his ego in overdrive. The choreography and editing of all the fights is done really well, and contributes to the intensity of the movie. There are no pyrotechnics or elaborate stunts in Out for Justice, but the movie works just fine without them.

The Brooklyn setting and Gino’s relations with the local community (including the mafia) add a lot of atmosphere, and are an important component of why the movie functions so well. The setting is full of cliches, but director John Flynn captures the ambience and livelihood of the Italian-American working-class neighborhood convincingly. Out for Justice also wouldn’t be as good without William Forsythe’s performance as Gino’s antagonist Richie, who has become a drug-addicted psycho-killer that terrorizes the neighborhood. And he certainly does it well! Whenever he shows up on screen, someone ends up being killed. Apparently Seagal even insisted of having some of Richie’s scenes removed, as he was concerned that Forsythe would steal the movie from him.

Out for Justice is overflowing with adrenaline and brutality, great hand-to-hand combat scenes, and a vivid depiction of the Brooklyn neighborhood. Due to the sole focus on Seagal’s violent escapades and eccentric manners, and a striking performance of William Forsythe as Gino’s antagonist, Out for Justice takes the top spot of his movies in my book, and is one of the movies Seagal deserves to be remembered for.