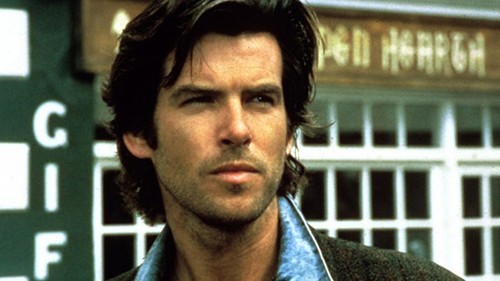 Before he was James Bond, Pierce Brosnan was Mark Taffin. 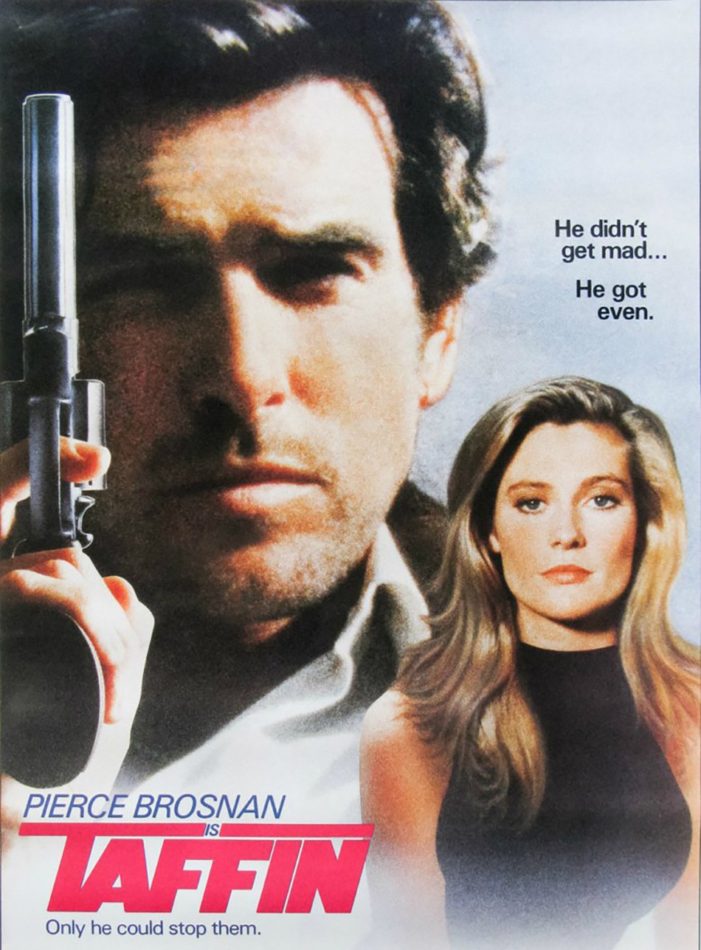 For many people of a certain age, Pierce Brosnan is their James Bond. Racking up an impressive four outings as Britain’s most famous secret agent, he truly made the part his own in the 1990’s. Being tall, dark and handsome, combined with an intimidating presence and some Irish charm, meant he was pretty much tailor made for the role of 007. There was a long roe to hoe before he was cast as everyone’s favourite martini drinking sex-pest however. Many movies had to be made first. Before his comedic turn in Mrs. Doubtfire, before his venture into the realms of sci-fi in The Lawnmower Man (which is a much, much better film than you remember it being), Brosnan returned to his home country of Ireland to make a sadly forgotten action-thriller. The name of that forgotten movie? Taffin. 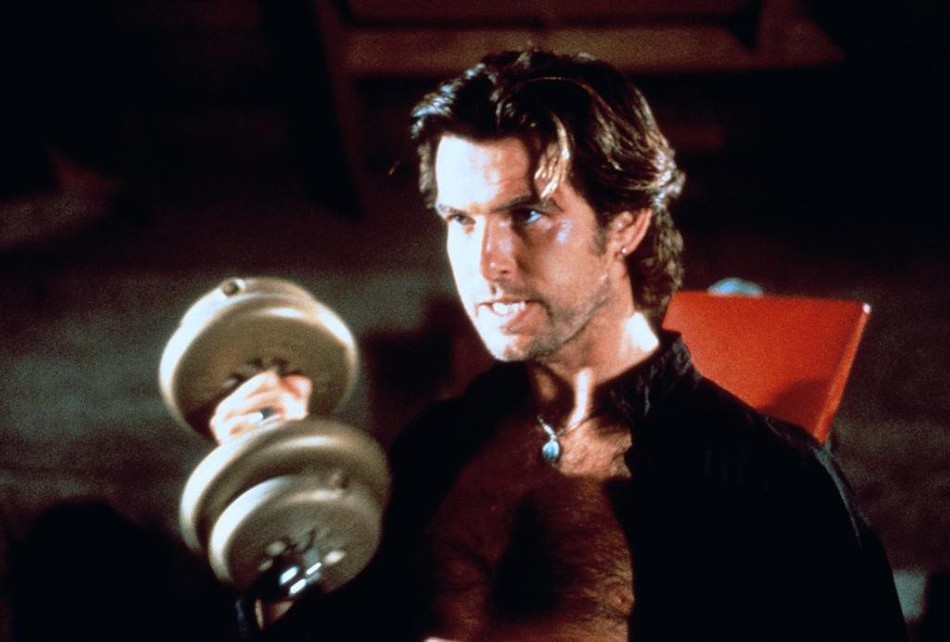 Before we go any farther, please allow me the indulgence of a brief history lesson. 1987 was a year of highs and lows for Pierce Brosnan. The highs came from the fact that his TV series, Remington Steele, had recently been cancelled. Brosnan had no real issue with this as he found the show to be quite stifling and restrictive to his acting abilities. The lows meanwhile, came from the fact that this very same TV series had cost him the chance to portray James Bond in the rather excellent The Living Daylights. As the story goes, Remington Steele had been cancelled after its fourth season, and so Brosnan was promptly cast as Bond to replace the ageing Roger Moore. Don’t feel too bad for Roger though, folks. He would go on to star in 1996’s martial arts epic The Quest alongside it’s writer, director and star, Jean-Claude Van Damme.

Anyway, the fact that Brosnan was the new Bond caused a late surge in popularity for the axed TV series, and so at the eleventh hour, a clause in the Irishman’s contact was activated and he was forced into doing a fifth series. The role of Bond then went to Welshman Timothy Dalton, my own personal favourite 007. Brosnan wasn’t the only one to miss out on a major role because of this kerfuffle. His Remington Steele co-star, Stephanie Zimbalist, was forced to relinquish the role of Anne Lewis in the 1987 masterpiece RoboCop to Nancy Allen. A tough break there for both Brosnan and Zimbalist. Once Remington Steele was eventually cancelled after its brief fifth series, Brosnan was now free to forge his own path once more. Freed from the confines of TV, one of the first films Brosnan would make was Taffin.

In Taffin, Brosnan takes the lead role as Mark Taffin, a tough guy debt collector in small town Ireland. The film starts in traditional action movie fashion, with a dynamite fight scene. Taffin, accompanied by his fantastic head of hair, enters the restaurant of a gang who have no intention of paying off their debt to the local butcher, and swiftly beats the tar out of all those present. It’s a nice way to start the movie, and shows us right from the get go that Taffin is a no nonsense type of guy. Don’t mess with him or his trendy haircut. Seriously though, late 1980’s Pierce Brosnan has the best head of hair I’ve ever seen on a man.

Anyway, the character of Taffin pretty much set, things soon escalate in the small Irish town. An evil syndicate has plans to build a big chemical plant right on the outskirts of the town. Of course, the townspeople aren’t too happy about this, and so, with no other option, are forced to turn to local hardman Mark Taffin to save the day. It’s really pretty standard stuff and the type of story we’ve see in a dozen different movies before. One man standing alone against an evil gang. Taffin acknowledges its influences pretty early on for the more eagle-eyed viewers amongst us as a High Noon poster can be seen in our hero’s trendy attic conversion home. High Noon is a quality movie no doubt, but can the same be said for Taffin? Well, yes and no. 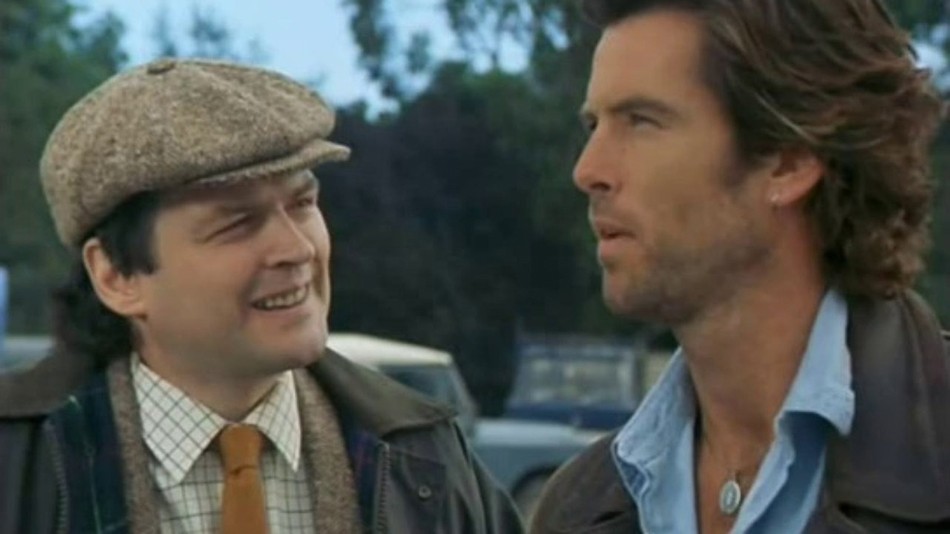 Taffin certainly had a lot going for it. For a lesser known film, it boasts a good few well known faces. Granted, none of them, bar Brosnan, had make it big yet, but they’re still there nonetheless. Taffin’s love interest is played by Alison Doody, an actress who would find fame the following year by playing the misguided Dr. Elsa Schneider in Indiana Jones and the Last Crusade. Taffin’s brother meanwhile is played by Patrick Bergin, an actor best known to you for his roles in Sleeping with the Enemy and Patriot Games, but who is best known to me as Dr. Benjamin Trace from Lawnmower Man 2: Beyond Cyberspace (a movie which is much, much worse than you remember it being).

They’re not given a whole lot to work with here, but they do a good job with what they’ve got. Another big name involved here is composer Hans Zimmer. Everybody needs to start somewhere I suppose. Unfortunately, the music here isn’t up to the epic standards of the scores he provided for such classics as Gladiator and The Last Samurai. It’s pretty much a barrage of up-tempo, stereotypical Irish music. They add a bit of levity to action scenes, but grow old pretty fast. 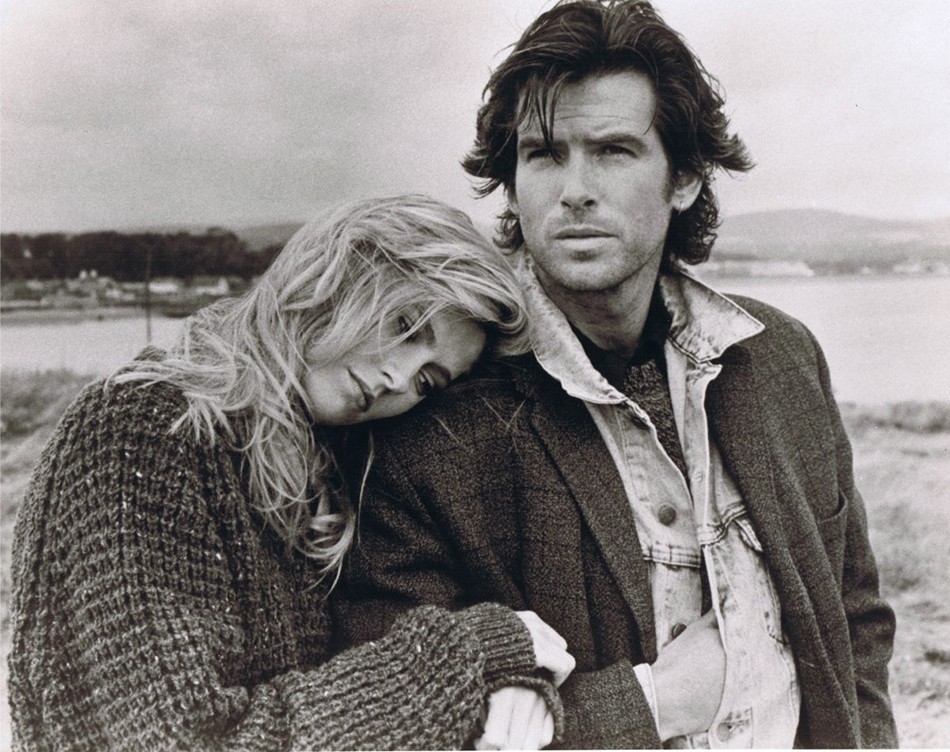 The actual character of Mark Taffin himself is actually pretty interesting, which is a nice change from the cookie-cutter heroes us action fans often get landed with in our movies. Sure, he ticks a lot of the classic action hero boxes with his martial arts skills, and his bananas hot girlfriend and his red convertible, but, like a Transformer, there’s more to him than meets the eye.

Taffin was studying to be a priest, you see, but dropped out when he realised that the only way to truly change the world for the better was by dispensing ass whoopings. It’s a neat enough backstory, and it differentiates Taffin nicely from other gung-ho action types. He can often be found lazing in his crappy office and reading books on morals and ethics, trying to justify how he lives his life. Good for him. He also goes home every Sunday to have dinner with his elderly mother. What a stand-up type of guy!

Not Quite Bond Action 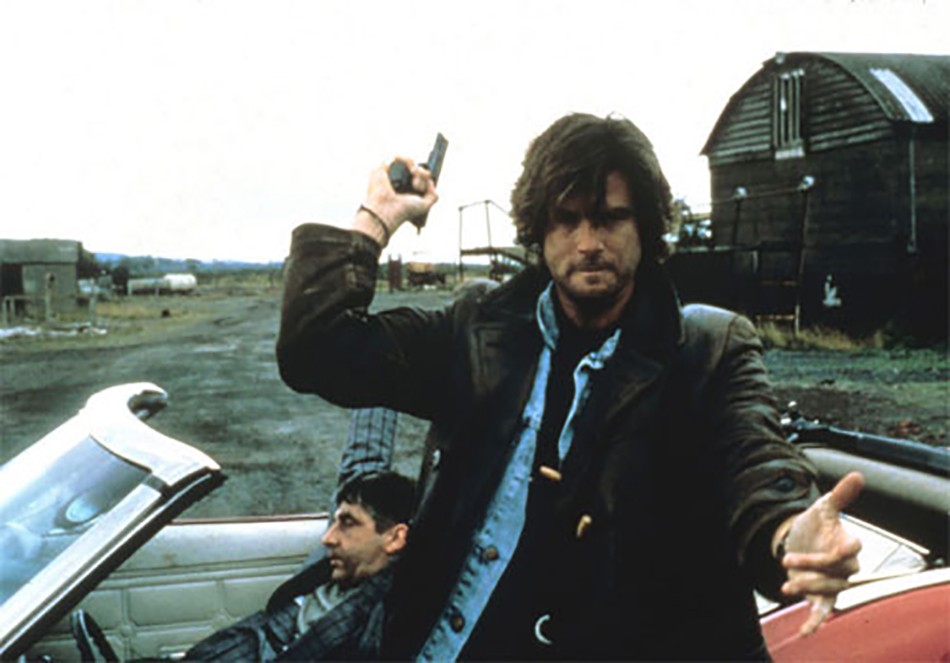 But, what of the action scenes? This is an action movie after all. Taffin has got you covered here, but again, it’s a bit of a mixed bag. This movie has bar room brawls, car chases, gunplay, and explosions. They’re not done particularly well, but they’re there. The car chase in particular is quite poor. I had no idea that a 1971 Ford Mustang could be driven so slowly. Also, tractors have no business being involved in high speed chases. Fear not though, as there’s enough unintentional comedy here to keep you going between action scenes. Take the rural Irish setting for example. The small town has everything you’d imagine a small town in Ireland to have. Shops. A church. A bar. And an absolutely massive strip club. I got a good chuckle out of that one.

The fact that the local townspeople would be complaining about a big chemical plant opening near them is quite silly too. Ireland was going through a massive recession in the 1980’s with people leaving the country in their droves in search of work. No way would anyone have objected to the opening of a big business in their locality back then. Also, much has been made of Brosnan’s delivery of the line “Then maybe you shouldn’t be living here!” to his girlfriend in the movie. The was he says it is absolutely ludicrous and has become both a meme and a popular radio soundbite in England. Curious about it? Check out the video below and see for yourself. I’ll be waiting for you in the next paragraph.

So there you have it. It has its faults, but Taffin is a fun little movie. Based on a novel of the same name, its writer famously had major issues with the casting of Brosnan. He envisioned Taffin as an overweight and unattractive man. Brosnan, with his flowing locks, is neither of these things. Despite this, he still manages to get the toughness of the character across.

Much is made of in this movie of Taffin’s wasted potential. He is a well educated and ambitious man, so why is he wasting his time as a thug in a small village? I feel the same could be said about this movie. There’s a real sense of wasted potential here. It’s good, but it could have been great. As it stands, it’s still a good movie for any lover of action cinema to watch. The setting alone differentiates it nicely from other action movies of the time, and makes it worth the price of admission alone. Check it out.

A childhood spent watching Jean-Claude Van Damme kick people in the face led to Dan Shanahan becoming the well-adjusted human being and all-around nice guy he is today. Having spent the majority of his twenties kicking ass, taking names, but mostly teaching English in Japan, he now resides in his native Ireland. He lives in constant fear that a team of ninjas may have followed him home and now secretly share his house with him.