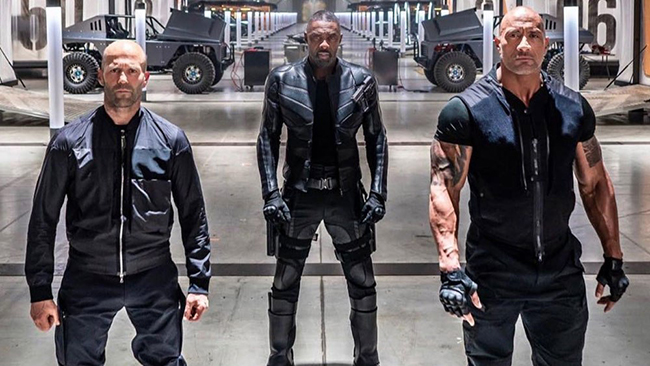 As a child of the 80s & 90s, I’ve been spoiled by some of the best action movies those glorious decades had to offer. Most notably the movies of Sylvester Stallone and Arnold Schwarzenegger. Those 2 icons of action molded the minds of many action fans around the world, myself included.

Unfortunately, we never got the team up movie we so desperately craved from them until 2013 with the prison action thriller Escape Plan. And while the movie itself is very entertaining affair, it is somewhat disappointingly a far cry from their heydays. Like it’s not bad at all. I think it’s a really good action flick. But it wasn’t what we were expecting. What we were expecting was a balls out, non-stop, slam bang, pun heavy action epic.

Needless to say, what we were expecting was something like Hobbs & Shaw.

“After a cybernetically enhanced super soldier makes an attempt to steal a deadly virus, DSS agent Luke Hobbs must team up with his former nemesis, british spy Deckard Shaw to stop him from getting his hands on it and threatening the fate of the world…” 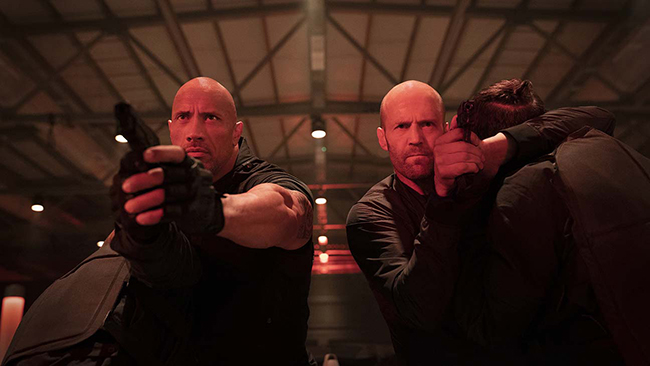 And they picked the 2 best people to lead this. Nolte & Murphy. Gibson & Glover. Schwarzenegger & Belushi. Stallone & Russell. Those are the names that are synonymous with buddy cop action. And Johnson & Statham perfectly carry on that tradition. Their back & forth banter is easily the best part of the movie. I could’ve watched them roast each other for hours if that was all the movie was. Real hilarious stuff.

Elba is equally great as the (literal) supervillain Brixton. The man is the epitome of supercool and is one of the best villains to grace the F&F franchise since… well Statham. Some people may be put off by just how ridiculous his character is (they literally show him having a Terminator spine and cyborg Equalizer eyes), but after watching Hobbs shove a torpedo out of the way with his bare hands in the last F&F, I think he fits right in.

He also brings levity to the character as it’s revealed that he was once a partner of Shaw’s and was actually executed by him, leaving him to be “revived” with cybernetic alterations. His feelings of betrayal by his former friend and partner is conveyed subtly but very well, giving this over the top to the point of cartoonish character a bit of solid ground. I know a lot of people wish he would play James Bond, but I think he’s too cool for Bond. In fact, screw James Bond. He’s Black Superman! 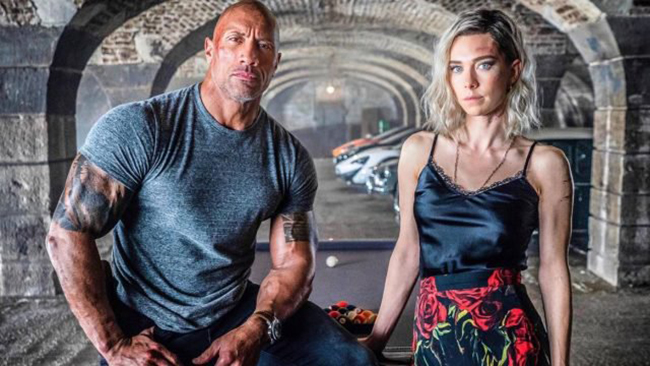 But the scene stealer among the cast is most undoubtedly Vanessa Kirby as Hattie Shaw. Man, I was not prepared for the ultimate action badassery that she would provide for us! This woman is a walking, talking death machine. After her impressive performance in last year’s Mission: Impossible – Fallout (which coincidentally starred actual Superman Henry Cavill), I walked out of this wondering if producers were already figuring out which action movie to put her in next. If I were one, I’d be looking for projects right now. She was awesome! Complete and total badass!

And everybody comes off looking great thanks to the amazing direction by Leitch. Man, is he really coming into his own as one of the best action directors out now. He keeps the movie moving at such a fast pace that its 135 min runtime just breezes by. And his sense of style and staging of scenes is impeccable. It has already come to the point in his career that within the first few minutes of the movie, I was saying to myself, “This is definitely a David Leitch movie.” The man has a vision that he communicates so well and thoroughly, and it brings me immense joy to watch a filmmaker I’m a huge fan of come into his own as a true auteur of action cinema. Bravo, Mr. Leitch. Bravo.

But is it true ultimate action??

And speaking of action, we get a full course meal of superhuman action theatrics. Wanna see Dwayne Johnson send guys flying across the room with a bitch slap? Wanna see Idris Elba catch a car with his hands, then flip it over? Wanna see Statham beat up 10 guys all at once without breaking a sweat? And non-stop car chases, fights, shootouts and explosions? Then you have come to the right show, because all of that is featured here in spades. The level of ridiculous action put a big fat grin on my face. It felt like being a kid again sitting in that theater.

For example: Remember in Captain America: Civil War when Captain America held onto a helicopter with one hand while holding onto the landing pad with the other? I guess Johnson took that as a challenge, because he one ups Steve Rogers himself by holding onto a chain attached to a helicopter while riding the back of a truck doing 100 mph! It’s that kinda movie, folks. And I loved it!

Any nitpicks? The cinematography of the big brawl between Hobbs‘ family and Brixton’s goons slightly bordered a little too close to shaky cam. Like I could see what was happening, but the camera got somewhat “energetic” for a second there. But it corrected itself soon enough for the final chase and fight scene, so no biggie.

But all in all, this was a great throwback to the glorious 80s for me. It may not be the Stallone & Schwarzenegger epic that we wanted, but it sure was the awesome Johnson & Statham epic that we never knew we needed. Just don’t keep us waiting too long for the sequel. Can’t have you guys making the same mistake Tango & Cash did. I need at least 5 more of these, pronto!


What were your thoughts on Hobbs & Shaw? Let us know in the comments below!