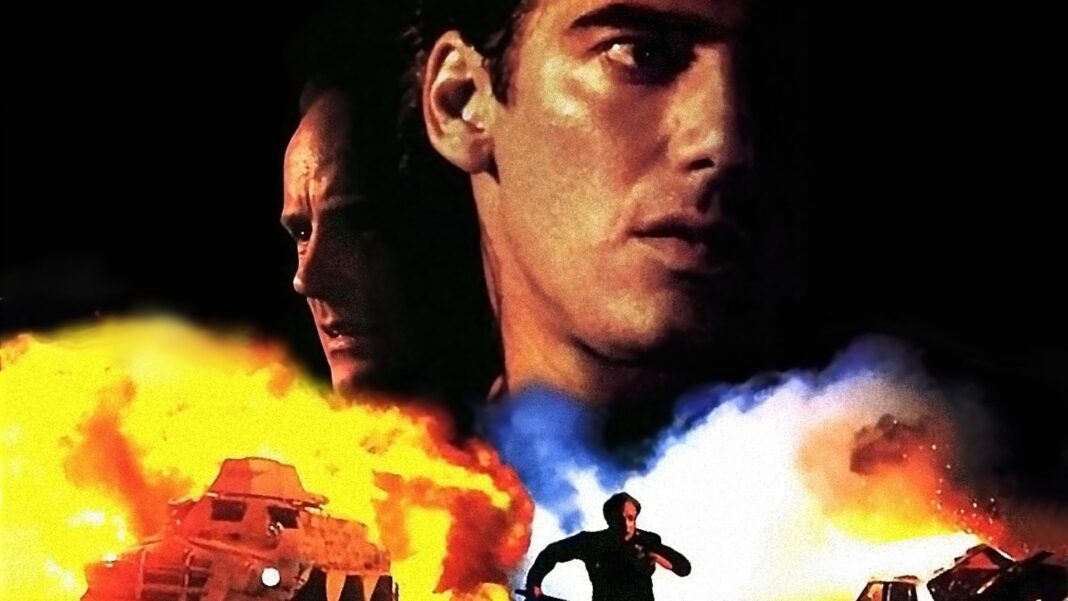 Remembering the cheesy humor and ultimate action of this nearly-forgotten buddy action classic! 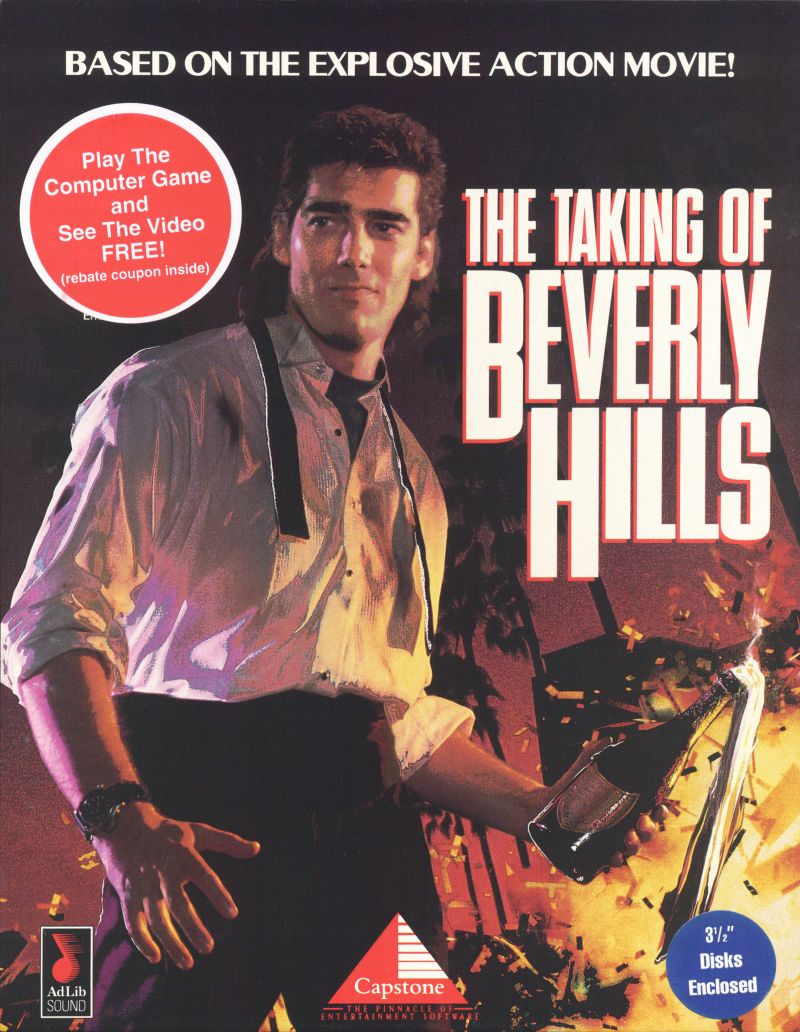 Some of the greatest action flicks blended light-hearted silliness with kick-ass action sequences, and this can be an irresistible combination if done right. Schwarzenegger’s Commando is a prime example, and in the late 1980s and early 1990s the formula was successfully applied to films such as Rapid Fire, Showdown in Little Tokyo and Tango and Cash.

The Taking of Beverly Hills did not reach the popularity of these classics. This may have been due to the absence of an established action star or martial arts expert in the main cast, and the bankruptcy of its original distribution company Orion pictures also did not help, as it led to a delayed release without much promotion. Thanks to digital media it’s not been forgotten, and in this article we’ll have a closer look at this awesome piece of old-school action cinema.

A truck spills a chemical on a street in Beverly Hills, and the entire neighborhood is evacuated. The supposed accident is the beginning of an elaborately staged heist by a bunch of disgruntled ex-cops to rob the houses of the town’s rich inhabitants. Only football star Boomer misses the call for evacuation and stays behind. Together with the slightly deranged cop Kelvin he takes on the small army of robbers.

Let’s take a deep breath and meditate away all disbelief about the setup of a heist organized around the evacuation of a complete town without anyone else from the outside noticing. It’s an unlikely scenario, but as all action movie fans know, if the plot isn’t set up in an outlandish way, we wouldn’t be able to enjoy all the mayhem that follows. What works well in the benefit of the film is that doesn’t really give you even a minute to think about any of the abundant oddities of the story, as we are either marveling at the corny jokes or the massive display of urban destruction director Sidney J. Furie puts on display.

The scenario of robbing Beverly Hills may sound like the film sticks it to the decadent rich folks, and the old rallying call “Peace to the hovels! Death to the palaces!” is taken quite literally when a couple of luxury mansions are turned inside out during the course of the film. But it’s probably not going to become your new favorite Socialist action movie, as the people behind the robberies are all a bunch of sleazy villains who just want their share of the pie, and all aspects related to social tensions are treated rather superficially to not ruin the upbeat vibe of the film.

Buddy Up with Ken Wahl and Matt Frewer 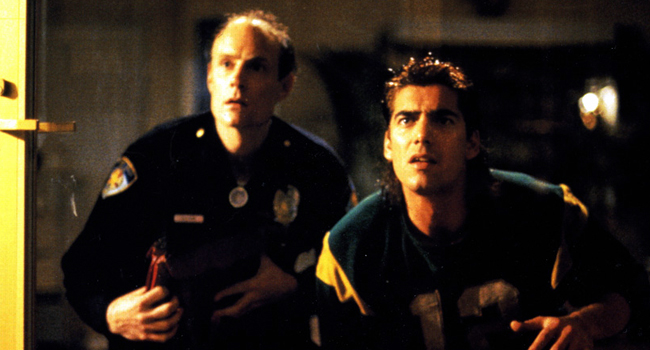 Ken Wahl as Boomer and Matt Frewer as Kelvin are not the most famous buddy couple in action movie history, but they make a good team with a solid on-screen chemistry. Wahl, who was mostly known for the TV series Wise Guy at the time, is not given a very demanding role but makes the best out of it, and delivers a charming portrayal of fearless macho quarterback Boomer with the mullet of the decade. Wahl suffered a serious injury in 1992 which forced him to retire from acting, and this made The Taking of Beverly Hills his last big moment in the movie spotlight.

Matt Frewer of Max Headroom fame plays Boomer’s sidekick Kelvin with his trademark crazy hair. In the beginning of the film he comes across a bit like that uncle where you’re never sure if he’s funny or creepy, but ultimately he turns out to be a decent guy with his heart at the right place. The bad guys also pack a serious punch, most prominently the great Robert Davi and Branscombe Richmond (who people may remember from the Renegade TV series).

Davi plays football club owner and Boomer’s boss Masterson with his trademark mix of sleaziness and elegance. He keeps hitting on Boomer’s love interest Laura on multiple occasions, who defies him every time (“You’re just a genital obsessive.” “Aren’t we all?”). He also starts to sing randomly in one scene, and picks a crossbow as weapon of choice for the finale, it’s Davi in top form! Hitman Benitez (Branscombe), who seems to engage in a mullet contest with Boomer, does the field work for Masterson. I really liked that his character is not introduced in any way or given even a single line of meaningful dialogue, he just shows up with a SWAT tank and angrily starts destroying things.

After the exposition, the film settles into a rhythm where every two minutes something is on fire or explodes to light up the night. Half of the movie is a relentless pursuit through the houses, streets and parking garages of Beverly Hills. All the action scenes are delightfully over the top, everything explodes rather easily, and car crashes and flips are abundant, as it should be.

The SWAT tank is at the centerpiece of the mayhem in many sequences. Benitez takes diabolical pleasure in destroying a couple of city blocks all by himself while plowing over luxury front yards, tennis courts and even entire mansions during his frantic chase after Boomer and Kelvin. Later in the film he goes for a more compact tool of annihilation and chases after them with a flamethrower mounted on the back of a pick-up truck.

Frewer and Wahl are not your typical action heroes, in fact they couldn’t be further from the usual trigger-happy buddy couple. Both realize that they’re outnumbered and outgunned all the time, and decide the only sensible choice is not to become a two-man army, but to run! They sure do a lot of running in this film, and when Boomer realizes that he has no clue how to fire a gun, he decides to rely exclusively on his throwing skills as a star quarterback to engage with his adversaries. This gives us many awesome and slightly absurd moments when rocks, Molotov cocktails made from 200 $ bourbon bottles and Shurikens are reliably hitting their targets.

The Taking of Beverly Hills gives us a healthy overdose of classic action tropes and cheesy humor. If you’re looking for easy-going R-rated fun without seeing the usual faces in the lead role of an action flick, you’ve found it!