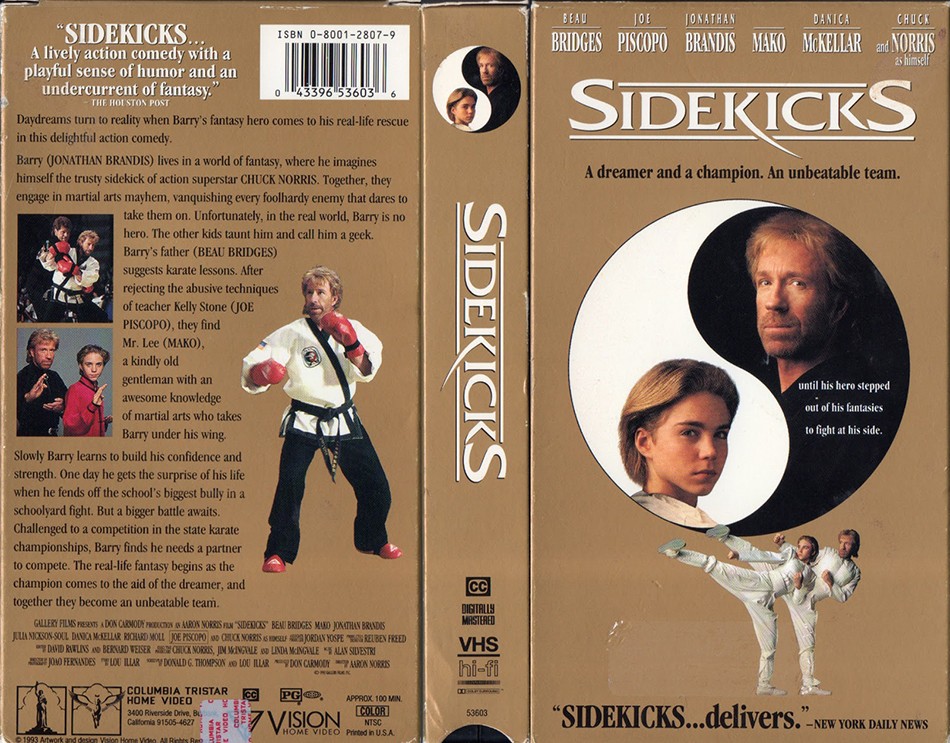 The Ultimate Action Movie Club reviews the ultimate kids action movie classic Sidekicks starring Chuck Norris. While not one of the most critically acclaimed Chuck Norris movies (although by UAMC standards of being enjoyably bad it comes in as a top 10 on one list – but not on another), Sidekicks is notable as one great of the great performances in the career of the later actor – Jonathan Brandis. 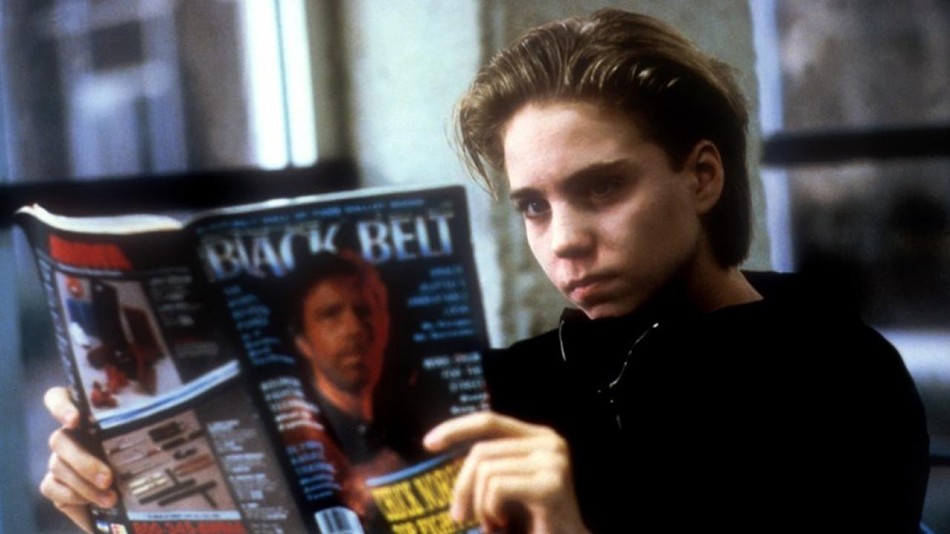 Jonathan Brandis’ tragically short career boasts plenty of memorable credits. There was his starring role in the underrated TV adaptation of Stephen King’s IT, the gender-swap soccer comedy Ladybugs and the underwater adventure series seaQuest DSV to name but a few.

But if you were to ask any action movie fans growing up in the early 90s to name their favourite Brandis film, you might find a few mentions of Sidekicks.

On the one hand, Sidekicks wasn’t an especially original premise. A film about a loner high school kid learning martial arts under an Asian mentor sounds suspiciously similar to the plot of an earlier effort, Karate Kid. In fact, it’s exactly the same.

However, Sidekicks was elevated above such mediocre status thanks to a charismatic central turn from Brandis, coupled with a clever storyline that weaved the action stylings of a certain Chuck Norris into proceedings. 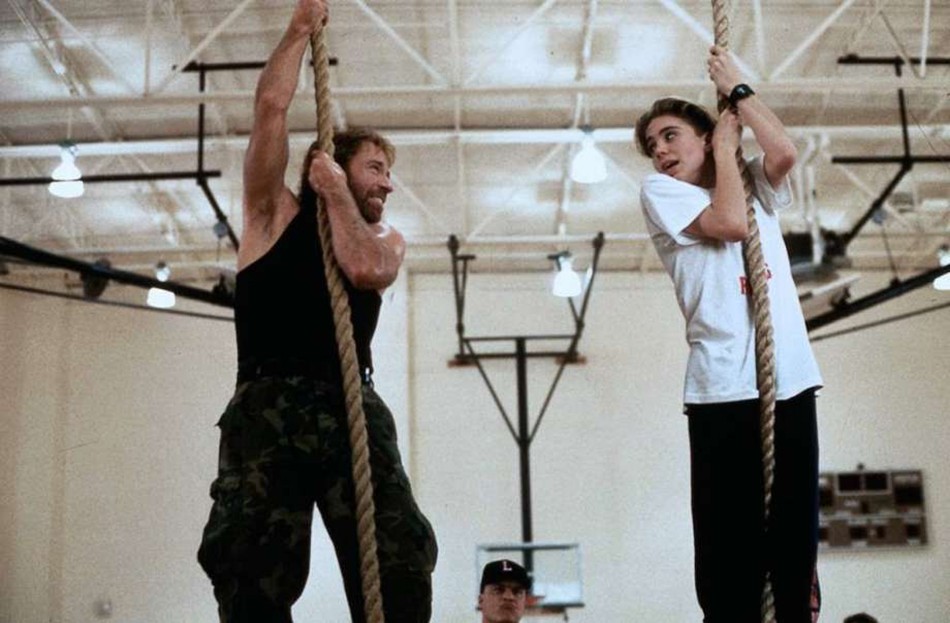 A worthy rival to Macaulay Culkin as one of the best child stars of his time, Brandis played Barry Gabrewski, an asthmatic and lonely kid living out in Houston, Texas with his widowed and father Jerry (Beau Bridges).

Bullied at school where he’s something of a loner, Barry escapes his reality through vivid daydreams that see him teaming up with his hero, Norris, to dispatch his enemies using Chuck’s familiar brand of high-kicking, gun-slinging justice. 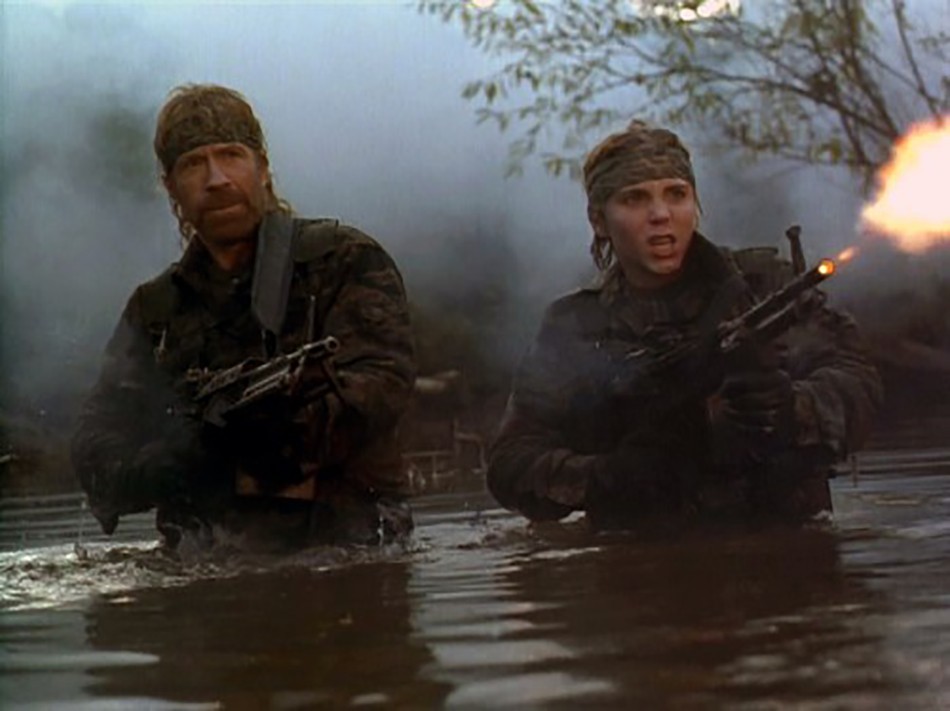 Directed by Chuck Norris’ movie-producing brother and stuntman Aaron Norris, at its heart Sidekicks was your standard against-all-odds karate story.

Eager to take up karate and emulate Norris, Barry path to glory is fraught with problems that begin when Joe Piscopo’s Kelly Stone refused to let him train at his dojo, deciding he is too weak for the world of martial arts.

It takes the belief and mentorship of Mako’s Mr. Lee to give Barry the impetus and belief required to make it in the sport, with Mr. Lee successfully channelling Barry’s love of Chuck into a training regime that feeds his body as well as his imagination.

Mako audited for the role of Mr. Miagi in Karate Kid, narrowly losing out to Pat Morita and was evidently keen to put his own spin on the familiar character archetype.

A familiar enough narrative, Sidekicks’ strength came with its ability to not only lampoon the familiar cinematic efforts of Norris in a family-friendly way but also incorporate of a positive central message.

Barry starts the film as a distant daydreamer but through inner-strength and determination, spurred on by his hero, ends the film as the karate champion he always hoped to be.

The Chuck Norris Thumbs Up

Where once he needed to escape to the world of Norris and his movies to find his strength, the film’s conclusion sees him thanking Chuck for his support before the action movie legend disappears with one of his trademark thumbs up.

The action, meanwhile, is plentiful and while there are firefights and fisticuffs, the bloodletting is minimal though not to the detriment of the film’s overall action vibe.

This, after all, was a time when filmmakers still felt they could expose children to ‘proper’ action. The kind of action noticeably absent from the film efforts of Dwayne Johnson and the like these days.

“Sidekicks is No Citizen Kane”

Let’s be clear: Sidekicks is no Citizen Kane. There are better action movies, better Chuck Norris movies and better karate movies – Karate Kid, being one of them.

It’s simplistic in places, follows a clear structure and doesn’t rock the boat too much in terms of characterization or plotting.

But there’s also a lot to enjoy here in a film that pokes fun at Norris’ star persona while encouraging youngsters new to Chuck to check out more of his work.

Fans evidently agreed too, with Sidekicks scoring a solid $17,180,393 at the box office, where it peaked at no.2 – not bad going for a kids’ film. In some ways, Sidekicks as ahead of its time too.

The idea of spoofing the on-screen efforts of an action movie hero would later be lampooned again, to more biting effect, in Arnold Schwarzenegger’s Last Action Hero. Jonathan Brandis should be remembered for so many different things and undoubtedly will.

But 15 years on from his passing, Sidekicks still holds a special place in hearts of a select few action movie fans who grew up on a strict diet of karate movies and are old enough to remember a time before they knew about the magic of Chuck Norris.


What are your thoughts on Jonathan Brandis / Chuck Norris / and Sidekicks? Let us know in the comments or on our Facebook page!