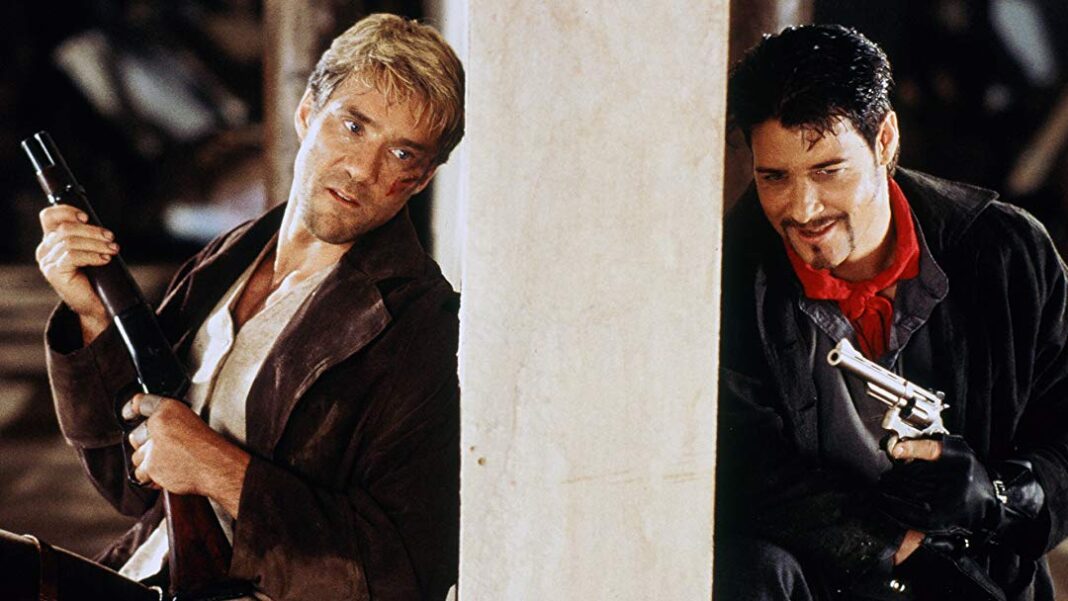 Cold Harvest – what an awesomely unique gift from the action movie gods! It brings me great pleasure to bring you this review today UAMC readers. This Nu Image offering from 1999 was helmed by martial arts action maestro Isaac Florentine, who was in the director’s chair. If that wasn’t good enough, they also brought in a couple of the biggest names in the DTV (direct to video) action world. Gary Daniels and Bryan Genesse.

Yes sir, the ingredients were all there and does it ever deliver! It would be awesome enough to have those 2 in a normal setup for these kind of movies, but Cold Harvest is anything but normal. It is a post apocalyptic western, with a healthy amount of martial arts added in for good measure.

The plot isn’t too complicated. It is set in a world where a comet has destroyed much of the earth. There is no sun, so it’s always night time. Daniels plays a bounty hunter who returns to his old stomping grounds after some time away. He intends to reunite with his estranged twin brother (yes Daniels in a duel role), but unfortunately he is too late. His brother was just shot down and murdered by Little Ray (Genesse) and his gang.

He ends up saving and protecting his brother’s wife played by the lovely Barbara Crampton (Trancers II/From Beyond). The other aspect of the story is that there were a handful of people that carried a rare gene that could be used to help save mankind, and Crampton may or may not be one of the people that had that gene. 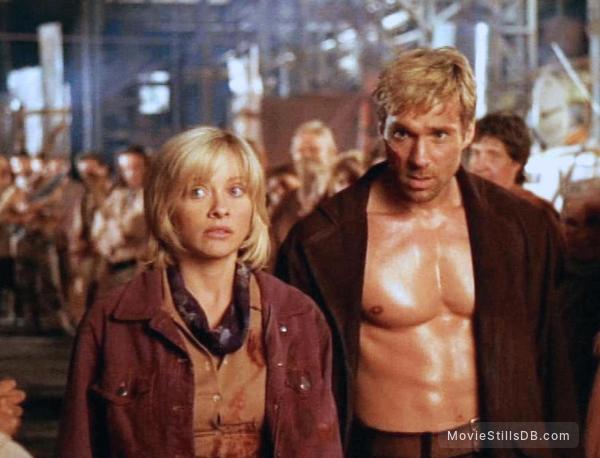 The set pieces and scenery make for a really cool atmosphere for the mayhem that ensues. In some aspects, the movie tries to be a western, complete with revolvers, cowboy hats and saloons.

And then at other points, it also has the Mad Max/Cyborg, post-apocalyptic feel with dirt bikes, dune buggies, rocket launchers and machine guns. Daniels kicks not one, not 2, but 3 bad guys off of dirt bikes throughout the film! Not to mention kicking guys through windows and making an awesome kill with a pitchfork!

Barbara Crampton looks great and turns in likeable performance, shooting some baddies herself. One of the funniest scenes of the movie comes when she is cleaning herself with a washcloth, while Daniels is simultaneously cleaning his gun, looking at her in a mirror.

There are some cool old west style shootouts and duels, especially at the end, but I have a feeling I know what most are watching the movie for and that is the martial arts! The fights are crazy and expertly choreographed as you would expect from a Florentine directed film.

Genesse, usually playing the good guy in most roles like Street Justice, Live Wire Human Timebomb and Death Train, has a ton of fun playing the cocky bad guy here. The final throwdown with Daniels and Genesse is one for the record books and one of my personal favorites of the genre.

Cold Harvest is one of Daniels’ finest hours and just might be the best martial arts post-apocalyptic western of all time! Change my mind.