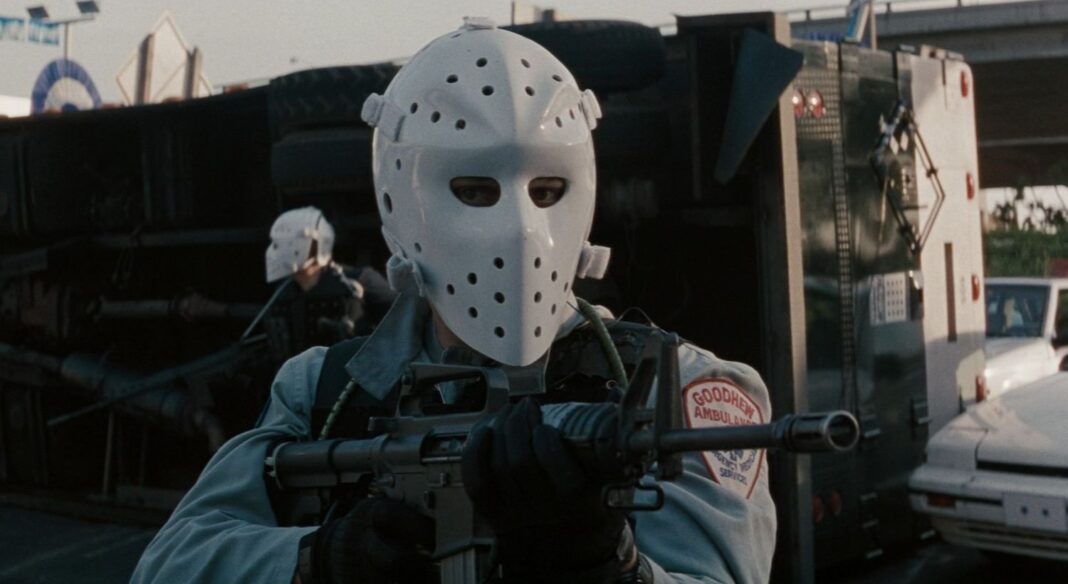 An exploration of one of the crowning achievements in ultimate classic cinema action with Michael Mann’s ‘Heat‘ (1995). 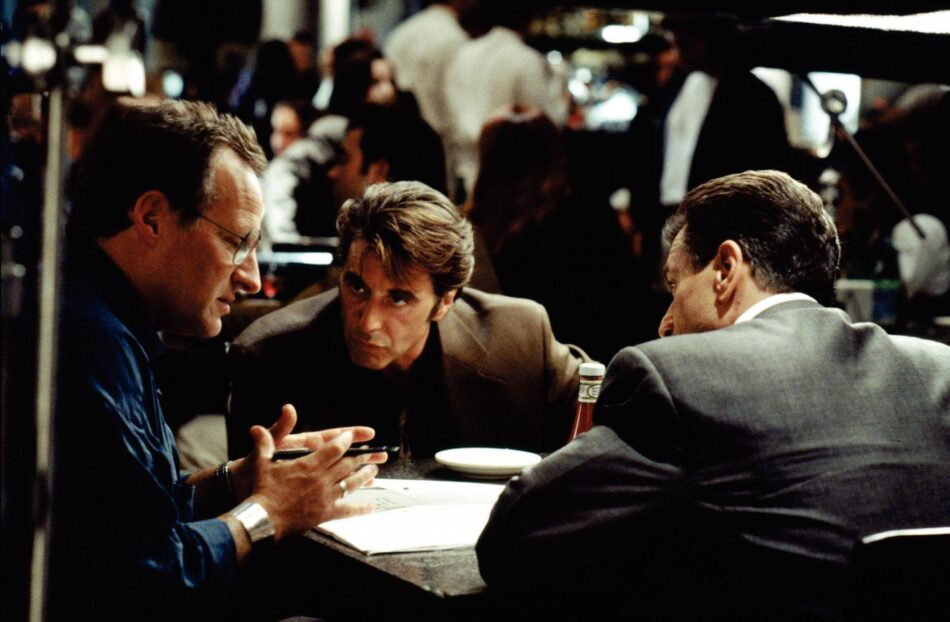 It was the night of March 27th, 1995 when the classic score of The Godfather played as Robert De Niro and Al Pacino entered the stage of the Shrine Auditorium in Los Angeles to announce the Best Picture at the 67th Academy Awards (the honor went to Forrest Gump). Although reminiscent of the Francis Ford Coppola generational second-parter, where the former played a young version of Vito Corleone on his way to become a mafia boss while the latter continued the legacy in much somber ways as his son Michael, the pedigree of both acting titans presenting that evening wasn’t coincidental. They were on a quick break from a production that was shooting all over town.

Not just any production. It was a motion picture that on the surface had the double task of pairing them onscreen for the first time in a contemporary fashion – no separated timelines this time around – and pitting each other on opposites sides of the law and approach to acting (one being the theater guy, the other the all-time methodist) later that year. That movie was titled Heat. 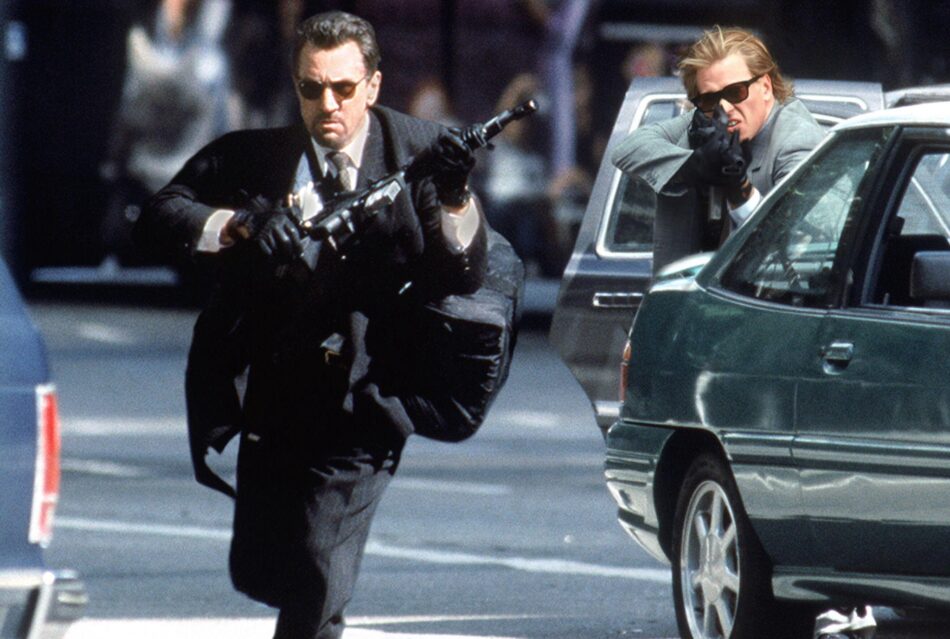 Whether at the old Ziegfeld theater in New York City or at Teatro Roxy in Maracaibo, Venezuela, everyone with a cinema sixth sense went to see the three-hour film upon initial release expecting two freight trains on collision course. Pacino (who finally won an Oscar for Scent of a Woman a few years prior) played seasoned cop Vincent Hanna while De Niro (double-punching audiences with Casino around the same time) portrayed Neil McCauley, a professional thief who lives by the creed: “Have no attachments. Allow nothing to be in your life you cannot walk out on a thirty seconds flat if you spot the heat around the corner”. Heat, as in police or impending gunfire.

Boy, did this Los Angeles crime saga (as the tagline read on the poster) made an impression on this viewer in his late teens. Sure, today is mostly regarded for the epic showdown outside of a bank in downtown L.A. in broad daylight. The best action sequence in history, some would say, solely in terms of authenticity. It is widely known that the footage where Val Kilmer’s Chris Shiherlis reloads his weapon during the shootout is shown in military trainings (“If a Hollywood actor can do it this fast…”).

But there was something deeper, more meaningful to the experience. You suddenly realized that even though Pacino and De Niro shared a couple of scenes together – finally! – they never appeared face to face within a single frame (the closest one is a blurry shot from inside of McCaulley’s car as Hanna pulls him over and invites him a cup of coffee). What follows is “the” magnificent diner scene. No death stares, no threats or unkempt violence. It’s just two civilized men that happen to be on different sides of the spectrum. A game of cat and mouse. They pause, talk about what they are good at. They even share some recurring dreams they have. They become existential. Nevertheless, they know next time their path will cross is not going to be pleasant.

At this point, when the audience understands each man’s drive and personal dramas, you don’t know who to really root for. Could it be the obsessive cop who is on the brink of a third divorce or the disciplined sociopath who recently met the woman of his life and dreams of a getaway in Fiji? (Everyone I talk to about the movie to this day always lean towards De Niro’s side, myself included). Perhaps Neil and Hanna could be friends in an alternate world. But in the asphalt jungle of L.A., along the interminable highways and incandescent neon lights at night, in the imperfect gravity of law and justice, inside the dead tech post-modernistic bullshit houses and art deco offices, there’s not a minimalistic chance for these counterparts within the frames of life. Whose ideas are these? And why?

The mastermind behind it all is Michael Mann, aided by cinematographer and frequent collaborator Dante Spinotti. Believe or not, back then Mann was mostly known on TV for executive producing Miami Vice and the criminally under-seen Crime Story. Internet was barely a thing and the only way to find out about a director’s filmography was through media articles or Best Movie Guides & Review books. It didn’t take long to find out that Mann’s career was in a renaissance of sorts after a six-year gap between Manhunter (1986) and the much better-received The Last of the Mohicans (1992), a project that without a doubt hit the accelerator in Hollywood thanks to the success of another Native American revisionist epic: Dances with Wolves (1990).

Mann knew the real cops and crooks from his native Chicago. He didn’t treat them as good or bad guys like in most movies, he delved into their humanity albeit their lives are dictated by questionable codes of conducts. You wouldn’t want to meet them in real life. His first film was the formidable Thief (1981), where he used real life inspirations as technical advisors and even actors playing their opposite self. He knew the world and the men in Heat. In fact, he took a swing at the story and main characters before in the under-budgeted TV movie L.A. Takedown (1989), that’s basically a blueprint for the grandiose that came after. There’s not much of female counterparts or side characters battling their inner demons. I firmly believe that it was Reservoir Dogs, in 1992, that gave the new adaptation a push (trivia: actor Kirk Baltz who played the deformed Marvin Nash also appeared in Wolves). While Quentin Tarantino cleverly constructed his independent movie around a jewelry heist that is never played onscreen, Mann steered the crime genre not necessarily in the opposite direction but to a whole different level. The robbery had to be precise and big scale, it had to show how the McCauley and his crew operated like the professionals they were before and after the fact. There was research within the tension.

The Complicated Psychology Behind Heat 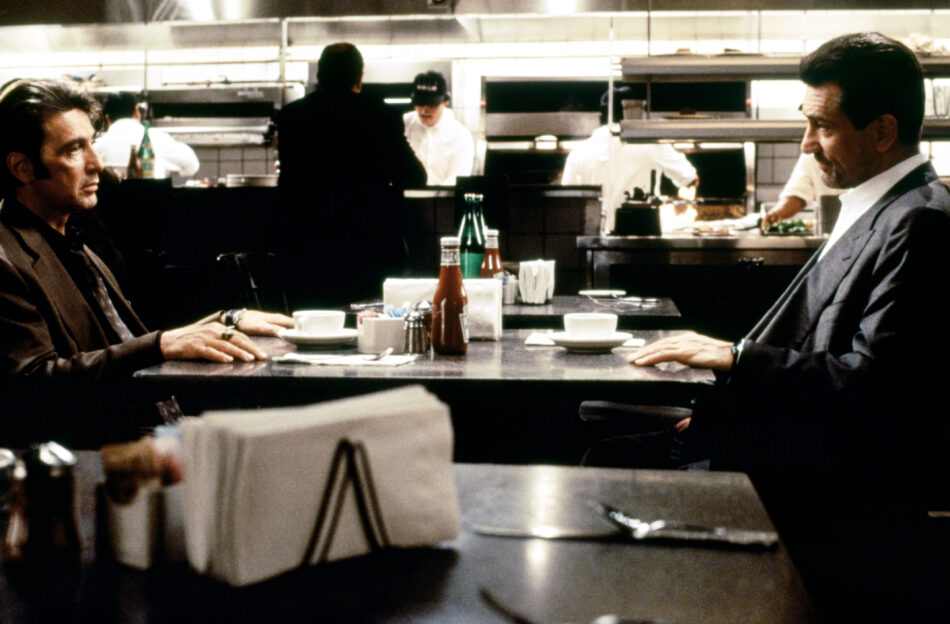 In an earlier scene De Niro’s character arrives home to an empty living room and gazes at the ocean in front of a window wall. Moments like that are an imprint in the Michael Mann oeuvre. James Caan’s character does it after cracking a safe in Thief, so does William Petersen before taking the serial-killer case in Manhunter, Russell Crowe before giving a deposition in The Insider (1999), Jamie Foxx uses a photograph in his cab between shifts in Collateral and Colin Farrell does it as well while persuading an informer in the movie version of Miami Vice (2006).

I had the opportunity to meet Mr. Mann in 2015 while promoting Blackhat and ask him about that recurring and introspective moment these men clearly reach. “Every criminal who I’ve met that has been released from prison after spending so many years behind those walls have confided in me that their first impact upon getting in the outside world is the assault of colors. I wanted to capture that”, he said. I think he was referring to Chris Hemsworth’s cyber hacker in particular, who as Johnny Depp in Public Enemies (2009) only gets the chance to stare at dry land. The ocean, I believe, has a more philosophical meaning. Specifically in Heat, De Niro’s McCauley seems to be thinking about drowning in his sleep as to not have enough time to do what he does. Or could be he is aware humanity that has come a long way. Call it the retrospective Hardy/Morgan hypothesis. You can even throw some Darwinism in it. Life at sea looks more simple and peaceful. Why did we ever bothered moving away from it? We as a species of intellect have complicated our surroundings with rules and order, bad and wrong.

So Why Does Heat Remain Ultimate Today?

There were some objections at the time Heat came out that didn’t look beyond its spectacular shootouts. Heck, it didn’t ever score a single nomination at the Academy Awards the following year. A reviewer at Premiere Magazine questioned why both New York thespians had to finally meet on the West Coast, cinematically speaking. At a random conversation I just happened to eavesdrop at a resort in Aruba, a guy (an American) was commenting to his lady friend and another couple about the very last scene with a hint of irony: “… and then he reaches out to shake his hand after he shot him. Yeah, I would totally do that!”.

That very finale when McCauley is bleeding near the runway of LAX and Hanna approaches shook me to the bone. At first I thought he was about to make a move and shoot back. Turns out he wasn’t. It really was a handshake… of honor. Tragically, the criminal materialized his mantra when the heat was indeed around the corner and he had to abandon the woman he loved. Then we get a close-up of Pacino about to end up all alone and his victory-less face speaks volumes. The eyes of his prey are turning into eight ball hemorrhage, just like he described in his dream. He doesn’t like what he did (and so do we), but he had to. It is who he is, it’s what he does.

Both men had a profound respect for each other and in that solemnly conclusion, abridged by Elliot Goldenthal’s score mixed with samples from Moby, the movie transcended into something very else. It’s poetic. Most action movies that followed seemed pointless and an exercise in futility for a while. Good guys, bad guys, gun shooting and explosions… it got tiresome. Heat took the classic elements of the noir detective story and turned it into a landmark of conceptual dualism, of yin and yang. Mann became the master he is known for today because of this. And as for De Niro and Pacino, the architectural design of their pairing delivered past the premise. It was a reunion of a lifetime. Like particles of Dog Day Afternoon and Raging Bull coming to meet in movie heaven. One of those magic gifts captured on camera. 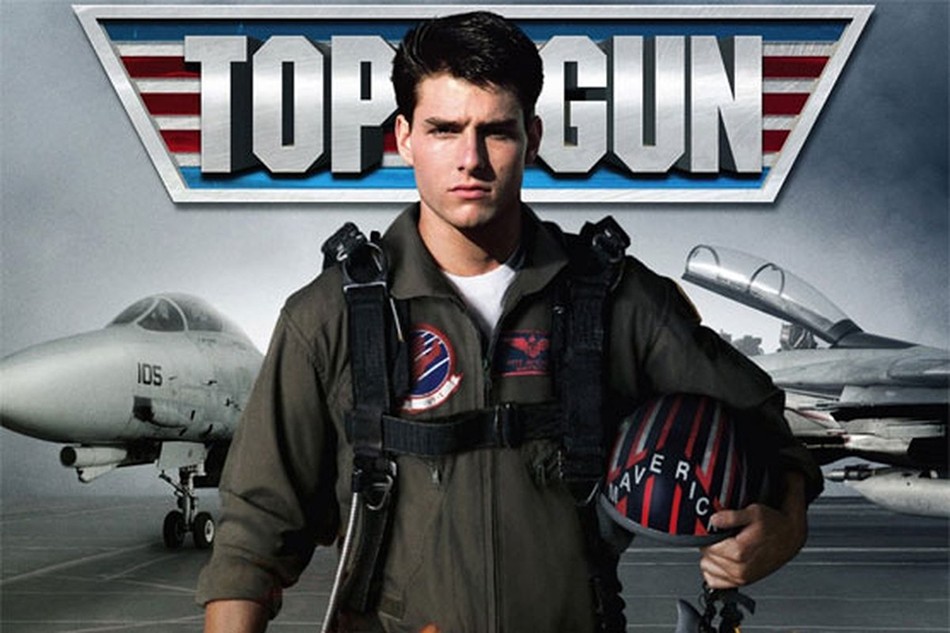