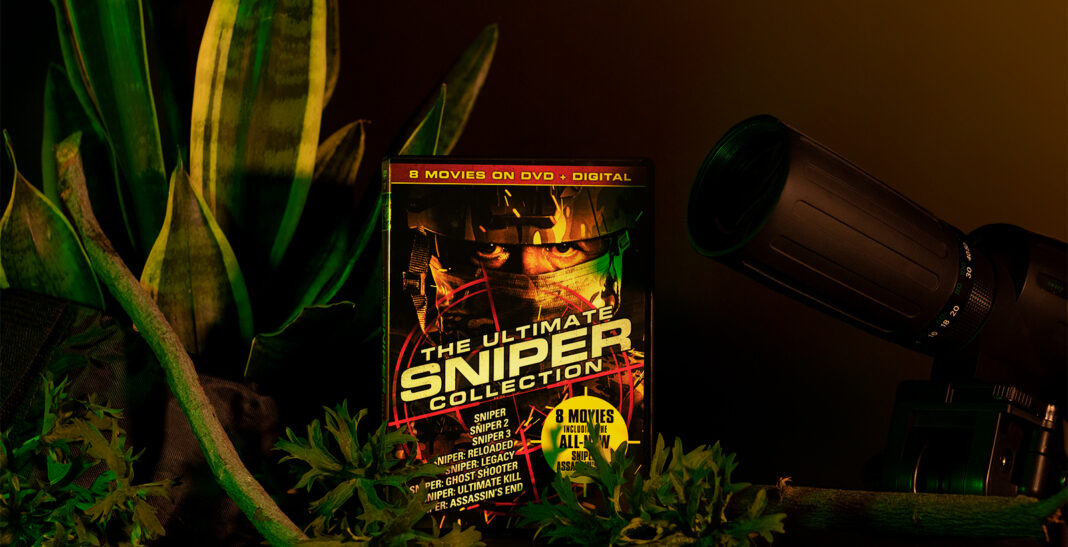 Rating and ranking all the Sniper Franchise Movies based on their Ultimate-ness!

Over the past 27 years they never stopped making Sniper movies. It may be hard to believe but so far, eight have been produced and released somewhere, either on cable or straight to DVD. I found the most recent one, Sniper: Assassin’s End, at my local Redbox and later discovered a complete set of them at Walmart (where all great movies eventually end up). Shockingly, it had yet to be completely buried in a $5 bin, so I bit the bullet and binged them all in a week.

I discovered a mostly unseen legacy of action and international intrigue that always involves a rival sniper and a convoluted government conspiracy. From Tom Berenger and Billy Zane to Chad Michael Collins and interchangeable female sidekick, the Sniper franchise has been trotting the globe and racking up quite a body count for nearly three decades. Strap on your ghillie suit and spot me as I go deep into the dark B-movie jungle to pick these sequels off one-by-one.

Down and Dirty: The first and the best installment has withstood the test of time with its battlefield melodrama, multiple games of cat-and-mouse, and unique bullet-POV action sequences. It hits the mark in terms of capturing the hunting aspect of sniper warfare along with the sound design that lets you hear and feel every expended round. Berenger’s Beckett is burned out from the get-go and harbors some obvious trust issues with his partner Miller (Billy Zane) and the mission in general. After this exhausting Charlie-Foxtrot in the jungle, how much more jaded and cynical can Beckett get?

Ultimate Action Greatness: Beckett uses a snoozy Miller as bait to out the rival sniper and delivers the coup-de-gras right through his enemy’s scope. Is it any wonder that Miller further developed his own trust issues after that episode? It demonstrates how tension-filled, character-driven, and action-packed a scene can get while only firing a single shot. There are other entertainingly worthwhile action sequences but this more minimalist action feels more intense.

Down and Dirty: Nine years later and Beckett hasn’t softened his outlook on life one bit. He’s brought back in to eliminate a problematic terrorist in the former Yugoslavia, or so he thinks. Federal inmate and occasional marksman Cole (played sufficiently by Bokeem Woodbine) is his new partner and presents another reason not to trust anybody. There’s so much double-crossing, it’s hard to sort through what’s what and who’s who but hey, the filmmakers could afford a tank and some decent action sequences with production value despite its estimated $5 million budget (it was filmed in Eastern Europe, so it makes sense).

Ultimate Action Greatness: Although there are plenty of explosions and shockingly bloodless gunfights to keep you interested, the convoy jailbreak scene is well executed and delivers a competent mix of traditional action and sniper goodness that make it seem too good for a straight-to-video title. No bullet cam in this one though! Disappointing but the rest of action sequences more than make up for it.

Down and Dirty: Beckett is called into action yet again even though he now has the early stages of the palsy in addition to lacking a complete trigger finger. This time he’s headed back to ‘Nam to hunt down a former brother-in-arms who’s gone rogue. The Apocalypse Now homages are plentiful in this lackluster thriller/spy adventure that’s a bit light on action. Beckett gets a lady friend, which as we all know, only serves to further develop his character and backstory. He’s still a cynical old bastard but we see a more caring, fatherly side to the Gunny who is way past his retirement date at this point.

Ultimate Action Greatness: While he and his local cop partner are monitoring some baddies at a hot Vietnamese night club, Beckett and co. are ambushed as a highly adequate firefight breaks out on the Saigon—sorry, Ho Chi Minh City—skyline. There’s a decent mix of gun-fu and sniping, as well as some counter-sniping for good measure. Beckett delivers another through-the-scope kill shot but with a handgun this time?! It’s still cool but it just doesn’t seem right at all.

Down and Dirty: Sgt. Beckett gets some well-earned leave in this soft reboot of the Sniper franchise. We learn that Beckett has a son named Brandon (Chad Michael Collins), who also enlisted in the marines but as a grunt. He has some issues with his Dad and he thinks being a Sniper is a chicken shit way to fight. Perhaps a returning, and sorely missed, Billy Zane can convince him to learn to love the scope. This time, the action is in the Congo and baby Beckett’s unit is on a UN mission to protect white farmers from militant rebels, or something. We actually get blood and a fair amount of firefights in this more stylized and faster-paced installment. The standard issue rival sniper and back-stabbing conspiracy tropes continue the Sniper tradition in this serviceable direct-to-video war/action sequel-boot (or is it reboo-quel?).

Ultimate Action Greatness:  Some particularly ruthless rebels are about to practice their machete skills on some poor war orphans when Brandon introduces them to his latent sniper talents. He starts dropping thugs one-by-one and empties about six rounds into one super-charged goon that just won’t take the hint. A ghillie-suited Billy Zane provides some additional cover from the brush as they start freeing child slaves a la Temple of Doom. Collins strongly resembles Berenger in this scene as he calmly destroys a small battalion with an old school Lee-Enfield bolt-action rifle.

Down and Dirty: The sequel to the soft sequel-boot delivers the anticipated Beckett reunion with a war-torn Syrian backdrop. This mission is more focused on smoking out the bad sniper. He has been picking off members of his former unit, including Thomas Beckett, which was deployed to Afghanistan and seriously FUBAR’d an op in 2004. Chad Michael Collins returns as Baby Beckett and teams up with his formerly MIA father to deliver sniper justice and wade through another supposed and convoluted government conspiracy. Papering over any emotional father-son issues, Collins delivers a mostly adequate lead performance as Berenger becomes a tired-looking and rusty supporting player. It’s a relatively straight-forward, no-frills follow-up. If nothing else, it features a Major League reunion with Pedro Cerrano (aka Dennis Haysbert).

Ultimate Action Greatness: Echoing the bad sniper’s deadly impetus for revenge, the good Snipers and the coalition fire team foul up their own mission to take out a terrorist target. Luckily for us, it results in a sprawling urban gun battle with machine guns blazing, snipers’ brass hitting the deck, and RPGs exploding rubble into additional bits of rubble. This sequence holds up as an impressive action set piece given the scope of the production.

Down and Dirty: Berenger takes a nap while Zane pinch hits as one of several father figures for Collins in a mission involving a pipeline in Central Asia and a few sniper teams full of fail. The trans-Georgian pipeline and its CEO must be protected at all costs while an ISIS tactical team of terrorists try to disrupt regional energy stability. It’s an OK plot but it’s set against a snowy mountain backdrop, so that’s kind of visually interesting. Pedro Cerrano returns as the Colonel who operates predator drones that provide over-watch but the terrorists find a way to exploit the technical advantage. Baby Beckett can’t quite seem to step out of Papa’s shadow in a mostly disposable entry into this rebooted franchise.

Ultimate Action Greatness: Sgt. Beckett and his rag-tag group of Georgian snipers are attacked in their mountain hideout with explosive and titillating consequences. Waves of winter-ready insurgents descend on a cabin only to be met with volleys of sniper rounds and mentor-saving head-shots. Again, it’s a competently filmed action sequence filmed in an otherwise forgettable direct-to-DVD release.

Down and Dirty: This is an unexpected breath of fresh air that reinvigorates a flailing 2010’s DTV franchise. They even brought back the bullet point-of-view shots from the original film. From the ultimate opening sequence involving opera, full frontal nudity, and an exploding head-shot to Berenger actually trying to deliver an admirable performance as an operations commander, this sequel really hits the mark. Berenger and Zane finally reunite to support Collins who’s on a mission to take out El Diablo, the mercenary sniper employed by the most Irish-looking Colombian crime boss of all time. Zane shines as a flippant field commander as Collins takes out the drug-smuggling trash.

Ultimate Action Greatness: This movie tries to reintroduce sniper battlefield ethics in a scene involving an allied priest turned informant who hangs from a tree in front of his church. The ethical dilemma is palpable: shoot the rope and reveal your position or let him choke while you desperately search for the counter-sniper. This type of choice never ends well but this scene reminds the audience of the stakes involved while getting us to actually care about the characters a bit more.

Down and Dirty: The filmmakers seemingly forgot about the last movie and went back a few installments to cast Master Gunnery Sgt. Beckett as a woodland recluse who’s hung up his rifle. Baby Beckett is framed for murder as father and son reunite once again to come to terms with their fractured relationship, escape the law, and foil a murderous enemy plot. The rival sniper is a Yakuza-trained badass with a past who goes by “Lady Death.” The Becketts do their best to fight against international conspiracies and domestic intelligence investigations in a more grounded narrative that doesn’t throttle the high-octane action.

Ultimate Action Greatness: A triple sniper showdown commences when the bad lady Sniper encounters the Becketts in the woods. Basically, it’s Mortal Kombat meets Metal Gear Solid as a sniper standoff turns into hand-to-hand combat. Eventually, the Becketts come out on top but for how long?

Where do they go from here? I’m sure there are a few more rounds in the magazine or at least one more in the chamber for 2023, which marks the 30th anniversary of the Sniper franchise. Although there have been some forgettable installments, the Sniper movies deliver consistent and competent action at a decent value.

Even if Berenger and Zane finally retire from the series, Chad Michael Collins has been adequately carrying on the mission for nearly 10 years. Future Sniper movies could use a shake-up though, maybe introduce some genre-crossing. The thriller vibes and gore effects in the later sequels would play well in a horror-action narrative. Whatever they come up with, I’ll be sure to scope it out at Redbox next to my grocery store.

In case you’re wondering, here is the best to worst ranking of the Sniper movies to date:

And special shout-out to the Internet Movie Firearms Database for identifying the rifles used in each movie except for Assassin’s End (but I know they’ll get around to it eventually).