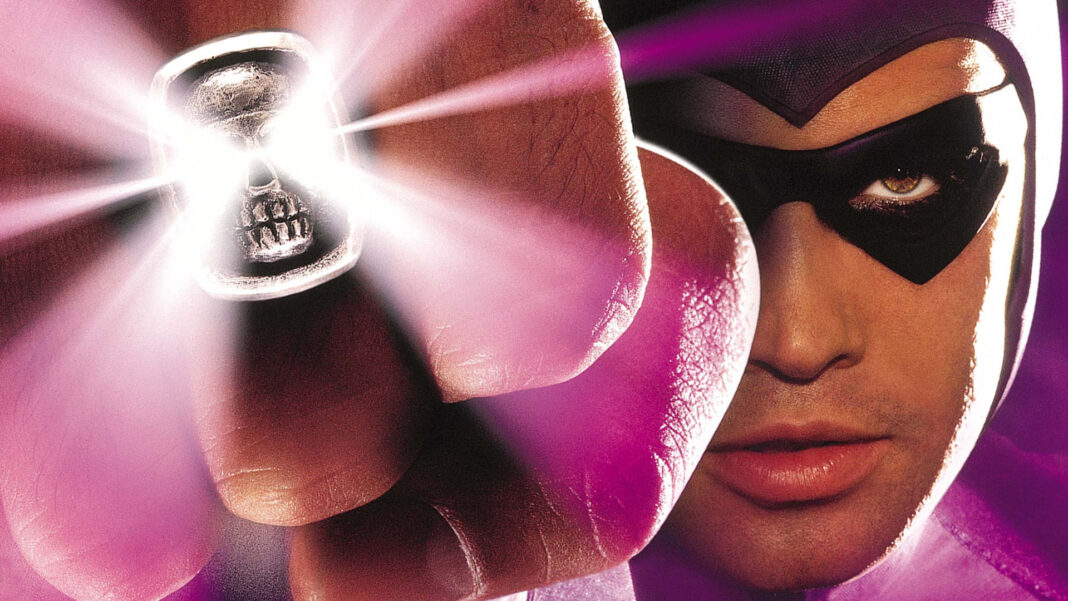 Remembering the off-beat, pulp-inspired ultimate mayhem that was The Phantom! 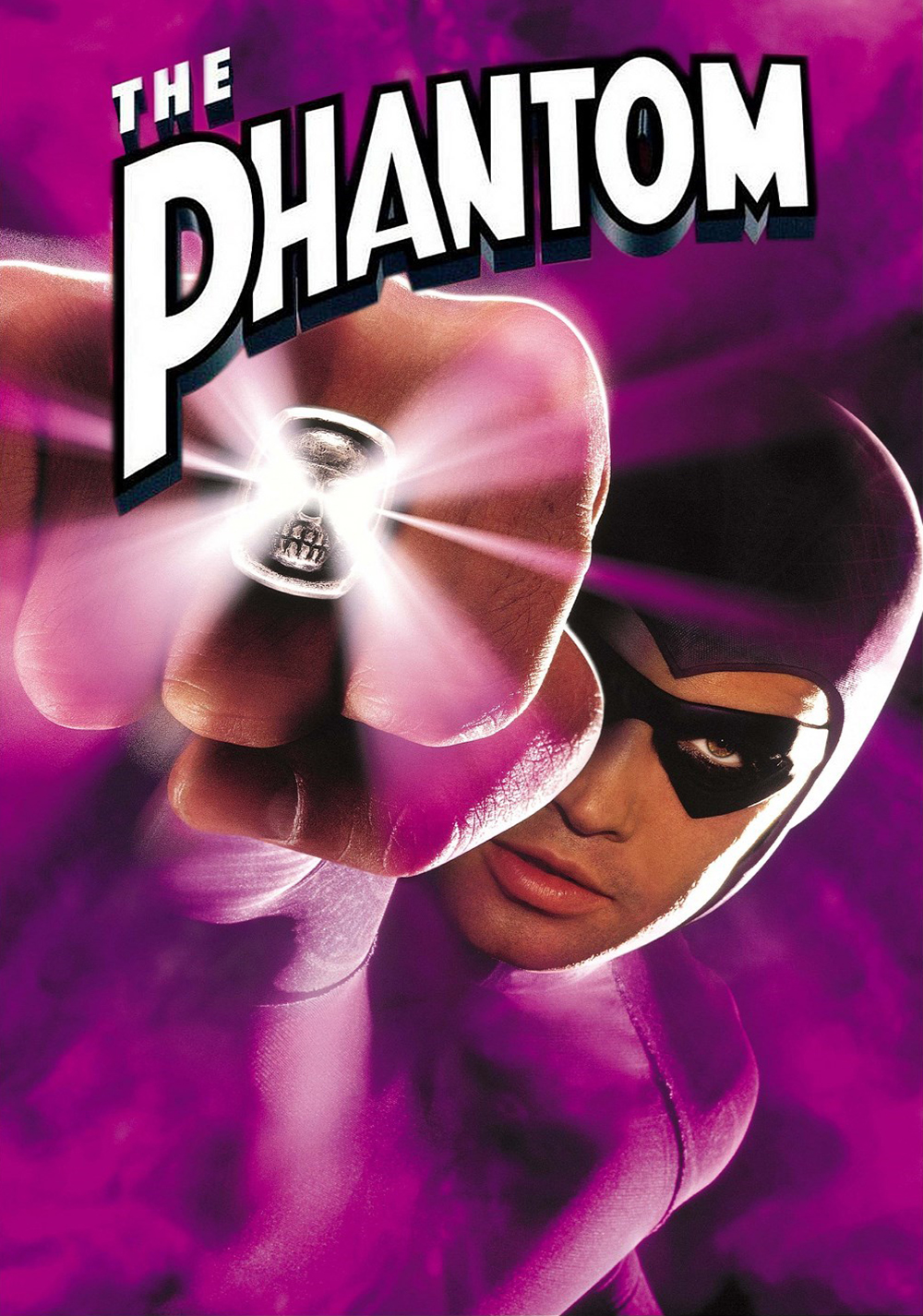 The Phantom was the best action movie that resulted from 1990s Hollywood’s brief love affair with the pulp and comic heroes of the 1930s. The studios at the time must have been trying to crossbreed two cash cows to guarantee lasting success: Indiana Jones and the rising appeal of comic book movies. The Phantom came in towards the end of this sub-genre’s popularity and audiences had already been there, done that by 1996. Still, the legacy of The Phantom lives on for action-adventure fans who love old fashioned practical stunts and a fun, well-paced story. Could the time be finally right to return to Skull Cave and help Billy Zane find the 22nd Phantom?

Well, yes of course it is! But first, let’s rewind and discuss what kicked ancient pirate ass and what almost flipped over a rickety rope bridge.

Also, why is it when our heroes roam around South Asia or Sub-Saharan Africa, there’s always an unstable bridge of planks and ropes that was engineered sometime in the mid-19th century that they feel compelled to cross?

Anyway, what primarily makes the Phantom and his criminal, piratical, and assorted exotic foes so endearing is that they were not only the first modern superhero/supervillains but the scope of the world has a time-tested, international appeal.

The Ultimate Power of The Phantom

Although the Phantom technically doesn’t have any superpowers in the general sense, he relies on his strength, endurance, dual pistols, animal sidekicks, cunning, and even diplomatic skills to fight injustice wherever it may be. His secret hideout is in a cave where he stores his knowledge and vast riches…remind you of anyone? When I saw this movie as a teenager, I admittedly knew nothing of the decades-long run of The Phantom comic strips, books, or TV shows, so naturally I assumed the movie was a rip-off of Batman and Indiana Jones with a smattering of James Bond. Little did I know that The Phantom pretty much started it all. Oh, and he has proto-force powers that allow him to talk to past Phantoms for guidance. There’s something for every fandom to appreciate in the grand-daddy of all pop-culture franchises.

With a fleshed-out backstory and legend combined with a volume of source material, there is a wealth of resources to make both interesting characters and engaging, action-packed storylines. Billy Zane’s likability and zeal for the character shine through, Treat Williams as the cheesy arch-villain is just having the time of his life, and Catherine Zeta-Jones has an interesting and underutilized femme fatale role. Even the other supporting characters are memorable and have their moments like James Remar’s Quill and Shang Tsung himself, Cary-Hiroyuki Tagawa who needed a much bigger role as the chief pirate of the Sengh Brotherhood. Kristy Swanson plays love interest Diana Palmer (basically Lois Lane) – but, eh.

These charming characters see their fair share of action in a relatively fast-paced, globe-trotting narrative. Ok, who doesn’t like a good rope bridge scene? I’ve seen it a dozen times but it still works in this movie. Car chases, horse chases through the jungle, plane chases that wind up back on the horse, which are supplemented by plenty of punching, shooting, mystical laser beams, and even some light third-act swashbuckling keep you engaged throughout the 100-minute runtime. The set pieces are well crafted and have an old-school charm, which complement the practical stunt work and effects. This type of action and style lend well to the ultimate drive-in experience, which is one of my all-time favorite cinematic memories growing up.

An Unfortunate Mix of Story and Tone 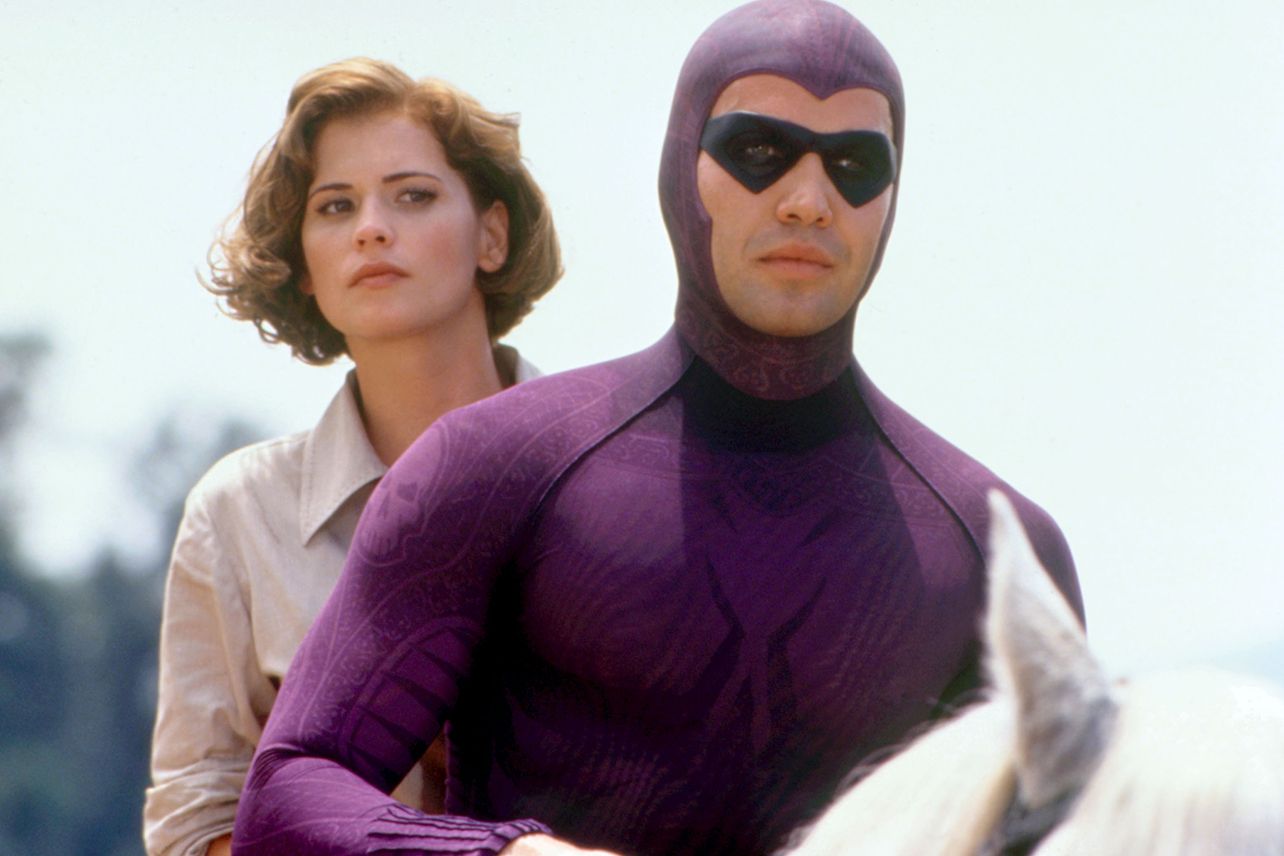 The overall story and tone is what likely put a lot of general audiences off and ended up killing the proposed sequels. Billy Zane was on board for Phantom 2 and 3 but it bombed hard making only $5 million of its $45 million budget on opening weekend. There was no more talk of sequels – that ghost had walked.

As far as tone: is it supposed to be an over-produced campy B-movie? Is the dialogue supposed to be that corny? Originally yes, and it was supposed to be a parody according to Joe Dante (Gremlins, Innerspace) who developed the first screenplay along with writer Jeff Boam, who coincidentally wrote Indiana Jones and the Last Crusade. In an interview with The Den of Geek, Dante was shocked that the filmmakers took many elements of the first spoof-y script and played the movie mostly straight. Honestly though, this is what makes The Phantom fun. These whacky, throwback elements feel like you’re watching a movie that was made in the 30s or 40s. The light-hearted feel and goofiness make this a highly entertaining and re-watchable summer flick today with a big bowl of popcorn and a sugary drink.

The Rocketeer: The Fun Love Letter to Pulp Action That Failed

What Does the Future Hold for The Phantom?

The Man that Cannot Die is bound to have a long-lasting legacy and perhaps in these dour times, we need him now more than ever. Forget the SyFy Channel’s stillborn attempt at a TV movie and series. For years there has been talk about a reboot with a writer at the helm but The Phantom: Legacy never seemed to get off the ground. From what little is known, the reboot would have been a character-driven father/son tale about Phantom 21 training up Phantom 22 to take his place. No word on ancient criminal organizations or air pirates. No wonder this lackluster logline never galloped out of the Bangalla jungle. That core character element is fine but we need equal amounts of action schlock to balance it out. How about this teaser:

The Phantom’s wife, Diana Palmer, and their two children died years ago under mysterious circumstances while he was in another country pummeling smugglers.  It’s now the 1950s and The Ghost Who Walks carries on his mission, and his guilt, but his age is catching up with him after he barely busts up a crooked mining operation near his jungle home. One of the goons escapes into an awaiting sea plane and the Phantom catches the tail markings.

He tracks down the owner of a fleet of planes with similar marks: Catherine Zeta-Jones’s character Sala. You better believe they have a secret love child who may or may not be tied in with Phantom’s arch rivals, the Sengh Brotherhood. Along with the corrupt leader of Bangalla, I’m pretty sure they had something to do with his family’s deaths too.

Can the Phantom save his son from a life of petty piracy, recruit a ragtag Air Force led by Sala, and organize a makeshift tribal navy to stop the Brotherhood’s explosively evil nuclear-related plans? Can he grow into this new family and carry on the Phantom legacy with his wayward son? Find out when Billy Zane dons the black and purple again in his next thrilling adventure!