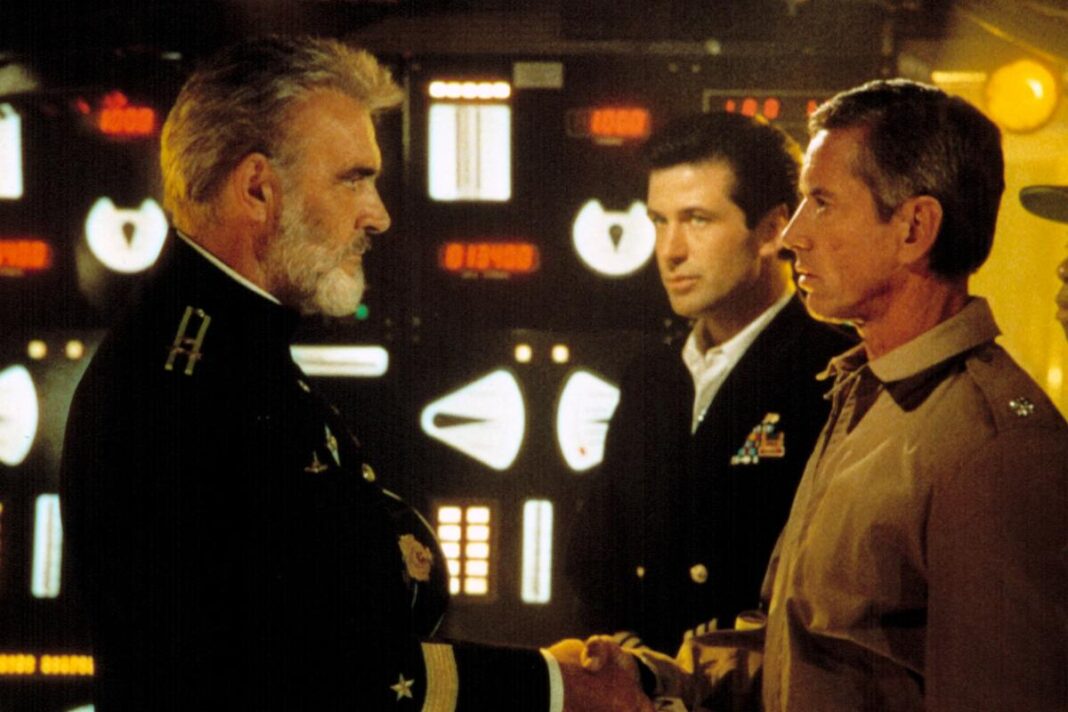 “They all lived in a red submarine.” A look at the famous action thriller as it celebrates its 30th anniversary. 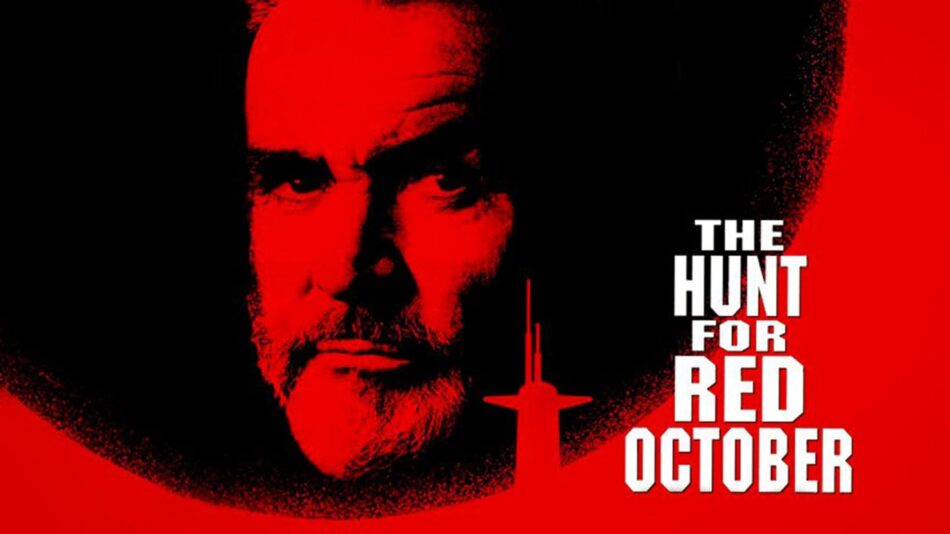 Director John McTiernan was on a hot streak. He wowed audiences with an Arnold Schwarzenegger instant favorite: Predator (1987). One summer later he re-teamed with Silver Screen Partners IV but instead of an elite commando squaring it off with an alien hunter in the Central America jungle he set his sights on a glass-y L.A. high rise seized by thieves (posing as terrorists) and gave the world Die Hard, solidifying Bruce Willis‘ career for his portrayal as lone cop hero John McClane in -simply put- the best action picture in the history of action or pictures.

So in many ways McTiernan’s next adventure, The Hunt for Red October, released in theaters exactly three decades ago (March 2nd, 1990), was a tough act to follow. First, it was the adaptation of the Tom Clancy best-seller, a book so technically complex in its storyline and accurate in its depiction of the United States Naval Intelligence that many thought it wouldn’t translate well onto the big screen.

Not only that, the map and politics around the globe were changing at the time. The fall of the Berlin Wall sealed the Cold War’s final chapter and sworn rivals like the US and the former Soviet Union now became friendly allies. Hence, the “red threat” was gone and a nuclear holocaust was less and less likely to happen. Post-Glasnost spy thrillers were melting away too, so to speak. Even Ian Fleming’s creation James Bond was facing its own validation date after 1989’s License to Kill and until 1995’s Goldeneye. 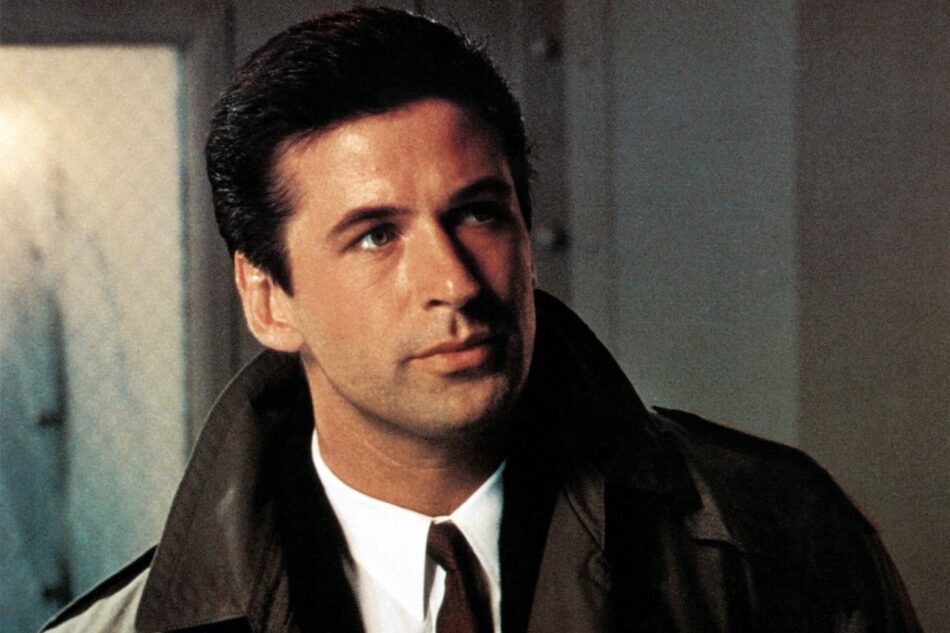 In-between that period audiences were greeted by a different type of war savior: Jack Ryan, a CIA analyst and family man who’s more at ease in government facilities and/or monitoring satellite feedback inside classified boardrooms. He doesn’t employ any advanced gadgets, just his intelligence. Lots of viewers nowadays identify John Krasinski as the face of the titular character in the TV series, but it was Alec Baldwin who had the honor of bringing dimension to that role first, although short-lived when Harrison Ford assumed the lead in Patriot Games (1992) and Clear and Present Danger (1994), two subsequent adventures that kept its own distance as they delved with IRA rebels and Colombian drug lords, respectively.

In Red October we meet Ryan catching the red eye from London to Langley to show some photographs obtained by British Intelligence, a typhoon class submarine with peculiar doors on its front sides. “Big son of a bitch!”, exclaims Admiral Grier in perfect James Earl Jones “bosso profondo” trademark. It appears the soviets have designed a nuclear ship with a silent propulsion system that makes it undetectable in enemy territory.

Why was the audience engaged then and has its admirers even today? Because McTiernan and screenwriters Larry Ferguson and Donald E. Stewart pulled a trick right out of the Dr. Strangelove’s playbook. The movie, produced Mace Neufeld and Robert Rehme, begins with an electronic transcription that informs you it’s 1984: “Nothing about what you are about to see… Ever happened”.

The filmmakers are not interested in lecturing history or bringing the same good against evil routine. This is a game of chess and they use the political context as mere background. We already know there won’t be international catastrophe, but boy does it dangle with the idea that any other turn of circumstances could have actually given the last century a whole different destiny. All within the reach of a red button.

But, A Torpedo is Still a Bullet 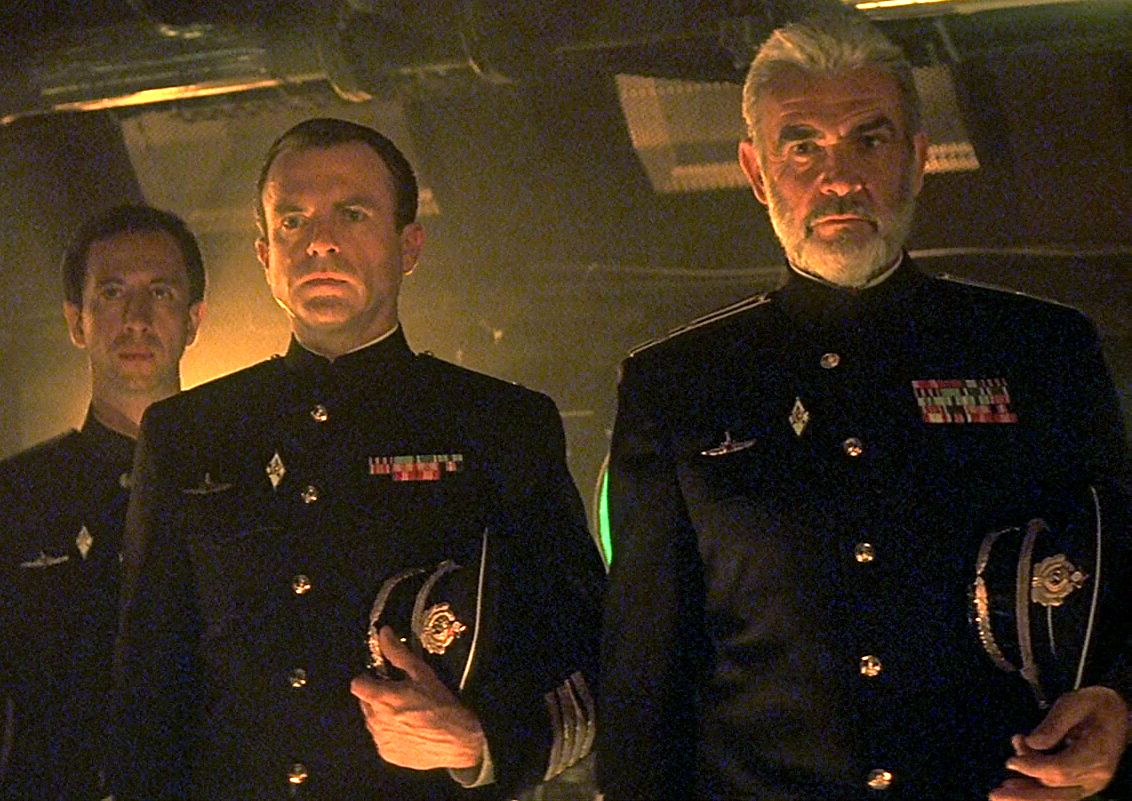 Granted, The Hunt for Red October is not a satire and doesn’t go for gags like Kubrick did back in 1966 (interesting fact: Ryan’s daughter has a teddy bear who she names Stanley). It’s not an action movie per se; nevertheless, the men behind the camera -McTiernan and his Die Hard cinematographer Jan De Bont- are men of action. They only want to avoid the gunplay at all costs. A thorpedo is still a bullet… of bigger proportions. Keep in mind these characters are confined within the weaponry chambers in the last line of military defense. This clearly happens at the climax when Ryan goes full McClane in the sub’s warhead room, looking for the saboteur (in a Clue-like reveal moment: it turns out to be the cook!).

McTiernan was the perfect choice to direct this and make it feel pulse-pounding to its very end. The ship becomes as silent and invisible like Predator. Later on, both fleets from the Americans and Russians are ordered to search and destroy the ship. Submersibles, supercarriers and helicopters become sort of Nakatomi buildings where Ryan has to infiltrate, fly and even jump off into the high tides after facing a plethora of bureaucrats and authority figures to prove the theory that could ultimately prevent World War III: Marko Ramius, the captain of the rogue sub, may be trying to defect.

Forget that Sean Connery cannot do the accent. He’s a movie star. He graces the screen as Ramius. Everybody minimizes the fact that this legend of an actor who portrayed the suave secret agent 007 with license to kill communist-like megalomaniacs back in the 60’s was now portraying… a Russian (well, not technically a Russian, Ramius was Lithuanian). What’s interesting is that in 1990 Connery also starred in The Russia House from John Le Carre’s novel, as a british publisher who obtains the manuscript of a soviet author and possible informer. In some formidable different ways, Connery was still exploring the world that has given birth to James Bond.

So How Does it Ultimately Stack up Today?

I had to watch The Hunt for Red October multiple times (once in theaters, many times later on home video) to grasp the abundant scenes and multiple sequences. How can anybody come up with a scope this big and keep the technicality and procedure so tight? Even the camera movements inside the submarines are carefully choreographed and lit to give you a sense of space and guidance. You believed the assemble until you never felt lost. Details like the transition between one language to the other is obtained through a simple close-up that is clever as it is ultimately poetic.

When Red October is originally detected by the USS Dallas before it disappears (Scott Glen also stands out as Captain Mancuso) you are clearly watching movie submarines. They’re spacious, colorful, and clean. For realism, where seamen can barely move but sweat closely to one another, and gradually grow a beard and come to terms with existentialism and claustrophobia, you go to see to Das Boot (1981). Here you will learn about terms like Crazy Ivans, when to answer with “On Ping Only” or how can a watercraft is ultimately capable of dodging a missile underwater and make the opponent its own target.

How can I leave out the outstanding score by Basil Poledouris that sounds like a hymn of stirring chorale voices? Great supporting actors and memorable dialog also abound: one of my favorite is Richard Jordan (“I’m a politician, which means I’m a cheat and a liar. And when I’m not kissing babies I’m stealing their lollipops”), Courtney B. Vance (“A whale, Beaumont, a whale. A marine mammal who knows more than sonar than you do”), Sam Neill (“I would have liked to see Montana”) and Fred Dalton Thompson, who also had the distinction of appearing in Days of Thunder and Die Hard 2 that same year!

It amazes me that to this day there was never a talk to make a direct sequel to this movie. Sure, there was Patriot Games but that story wasn’t even close to a Conn-Sonar, much less a periscope. At the end the Red October was left hiding in the shores of Maine, Ramius was on his way to political asylum and found a great friend in Ryan. Could the US Navy have replicated the caterpillars and remodeled a new sub with modern features for possible silent training exercises or even battles? I guess we’ll never know. McTiernan took a breather and went on to make Medicine Man (1992) before reconsidering what testosterone cinema meant altogether and his career would never the same. At best, we can always take solace in Tony Scott’s equally electrifying Crimson Tide (1995). Because deep down inside, all men of action somehow, sometime belong at sea.