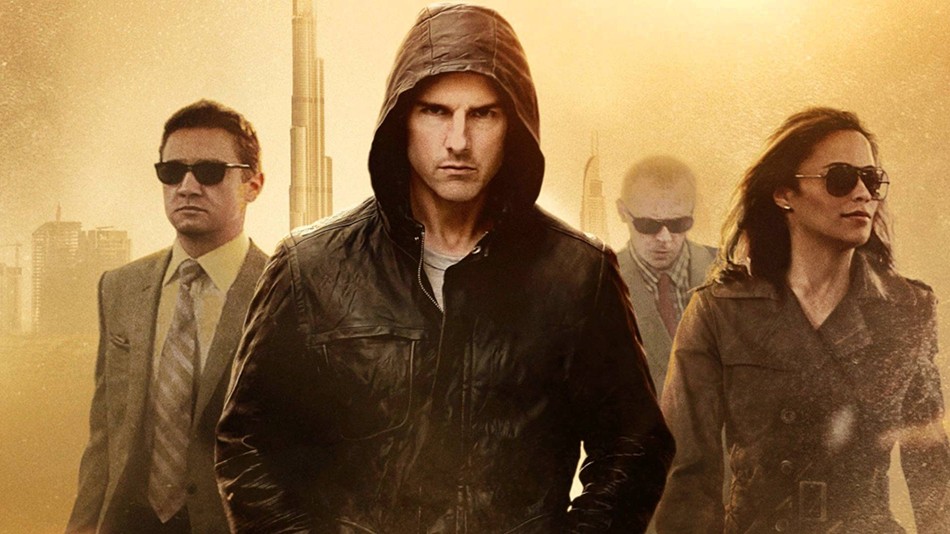 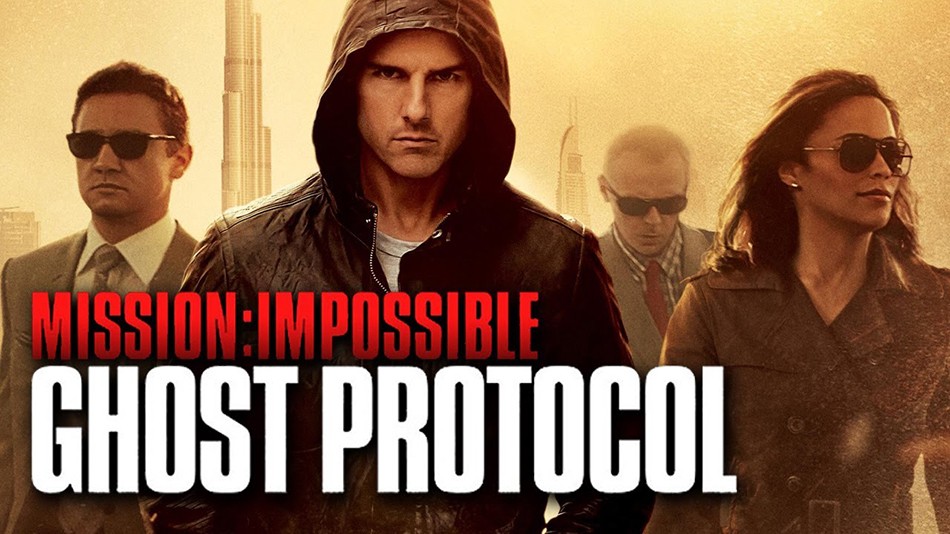 The year is 2011 and Impossible Missions Force agent Ethan Hunt is having a really bad day. You see there are stolen top secret files, an explosive device has gone off in the heart of Russia and although the terrorist code named “cobalt” is to blame, the world believes that the IMF are to perpetrators for the attack. The president of the United States of America has just disavowed the IMF, oh and just to put the icing on the cake Hunt and his team of ragtag agents must prevent nuclear armageddon and they’re not even getting paid.

So begins the thrill ride that is Mission: Impossible – Ghost Protocol (2011) the fourth installment in the, by now, insanely popular Mission Impossible franchise. Now let’s delve into how and why this movie deserves a place in the Ultimate Action Movie Club hall of fame, if there was such a thing. 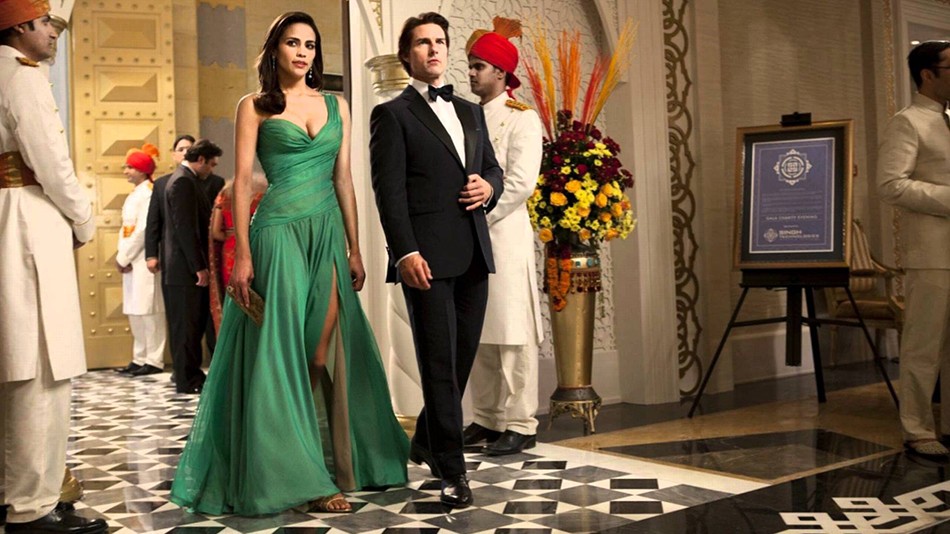 One thing for which the Mission Impossible franchise does not get enough credit from critics and the fan community is how it embraces its legacy as well as embracing innovation which is seen perfectly in this movie.

The overall of this method is to create something on screen that is completely iconic and recognizable as very Mission Impossible in tone and style but also absolutely reflects movie making today. This achieves something unique in long standing franchises.

That mix of established and new is built upon perfectly in this movie. In front of the camera we have the return of Tom Cruise and Simon Pegg from previous installments but then you have the rising stars (at the time) of current action movie legend Jeremy Renner and the incredibly talented, kick ass, female action movie star Paula Patton who add that contemporary element to the movie.

Behind the camera were a perfect mix of those that had a previous relationship with the Mission Impossible movies and new blood which helps to drive the movie forward so that new audiences can feel like they’re watching something that stands out in the marketplace. This balancing act is executed perfectly with the return of J.J Abrams, who having directed Mission Impossible 3 (2006) would return for this one as co-producer with Tom Cruise as well as the return of the legendary John Knoll as effects supervisor.

A real master stroke was to get the editor of the first Mission Impossible (1996), Paul Hirsch, this was a hell of a crew choice because not only do you have the feeling of franchise continuity onscreen and a return to the classy, noir style of the first movie but Hirsch is also a star editor in the world of movies. He is responsible for editing some of the greatest action movies ever made including Star Wars (1977) The Empire Strikes Back (1980) and Falling Down (1993).

So with the veterans established the next part of the Mission Impossible formula to success had to be fulfilled, that of a director. The directors of the franchise have been the very best that the world of movies had to offer and that legacy needed to be continued. Research suggests that J.J Abrams was going to resume directorial duties for the fourth movie but due to other commitments couldn’t return in that capacity so the hunt began for a new voice to take on the franchise. In March of 2010 Brad Bird was in talks to accept this whole new mission.

A New Bird Finds Its Wings

Brad Bird is a polymath of popular culture, a creative who can go from animation to live action productions with ease. You can feel the flavor of old school Hollywood in his productions, this could be because Bird was mentored at Disney by one of Disney’s legendary Nine Old Men, Milt Kahl. At Disney Bird was involved in that early, flawed but brilliant and completely underrated animated 1980s sword and sorcery classic The Black Cauldron (1985) which was one of Disney’s first attempts at doing a more mature themed action movie.

On the small screen Bird was creative consultant on The Simpsons for its first eight seasons and then in the year 2000 he joined Pixar after making the modern classic The Iron Giant (1999). At Pixar Bird would go on to create pop culture phenomenon The Incredibles (2004) which was a homage to action comics, especially those of Jack Kirby and 1960s spy movies. This recurring relationship between Hollywood glamour and creating big budget classic action made Bird a perfect shoo in for the Mission Impossible. This cocktail of director and franchise was perfect, especially in the second act of the movie.

Mission Impossible: Ghost Protocol’s second act is possibly one of the greatest middle acts of any action movie ever made. It is carefully crafted and expertly executed, it is genuinely heart racing and completely engaging. We start with some incredible shots of the desert and the sweeping soundtrack by Michael Giacchino which is reminiscent of that action movie great, Lawrence of Arabia (1962). We then move on to a daring operation which will give the IMF agents a fighting chance of avoiding nuclear conflict in true Mission Impossible style by Ethan Hunt conducting himself in true acrobatic craziness.

Just as the stunts of each film outdid those of the last, the stunts in this movie just reach a whole new level.  The stunt work was conducted on the Burj Khalifa in Dubai, the world’s tallest building. With clever use of Imax cameras, Tom Cruise’s peerless stunt work and just a dash of digital wizardry from Industrial light and magic, a completely immersive experience is created that has been seldom matched in action movies. This is, unbelievably, followed up by an absolutely visually stunning chase between Ethan and Kurt Hendricks in a sand storm. The sequence is full of action and incredible colors… It’s an experience the audience will not forget easily. 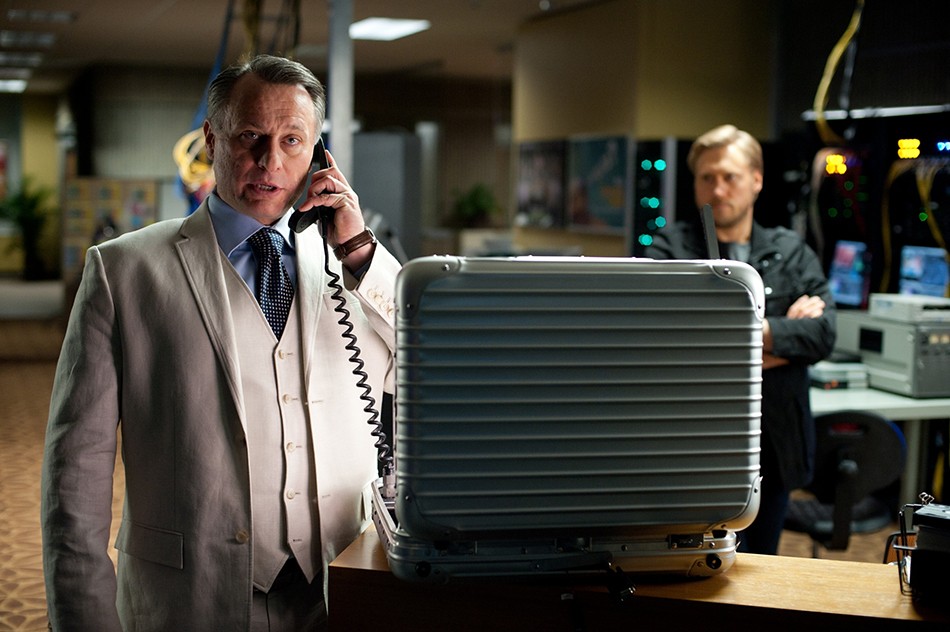 Another element of the film that audiences won’t forget easily is the chief villain of the movie, Kurt Hendricks. Codenamed Cobalt, he is played by the late great Swedish actor Mikael Nyqvist. Best known internationally as Mikael Blomkvist in the action crime thriller movies the Millennium series, which kicked off with The Girl with The Dragon Tattoo (2010) although Hendricks is nothing like the mild mannered, justice seeking Blomkvist.

Not even the villain in the third Mission Impossible movie played by the late, Philip Seymour Hoffman could match what we see here. The performance from Nyqvist is excellent and incredibly well rounded. He is a threat that is one of great menace which comes from the fact that the motivation of the character is the, very plausible, demon of extremism. The IMF are not just combatting yet another arms dealer but a fanatic who will stop at nothing to achieve his goals. This really adds to the movie. Ethan Hunt is a character built by morality and this movie give him and his team a brand new threat. Nyqvist is an excellent foil against Tom Cruise and their final conflict is electrifying to watch.

The Franchise That Keeps Up with the Hits

It’s crazy to think that when this movie was released the state of the action movie had changed again from what it was when Mission Impossible 3 came out. The action film had become more sophisticated and the franchises that were just starting out within the year of Mission Impossible 3’s release had become huge box office franchises, The Bourne films, Daniel Craig’s tenure as James Bond, the Chris Nolan Dark Knight trilogy were established and the Marvel cinematic universe was taking its first baby steps into greatness. In terms of storytelling what all of these franchises had in common was that the individual movies were all connected. Audiences were expecting bigger and more interconnected narratives and studios were getting people back a year or so down the line for the next in the series so just like all those other franchises Mission Impossible stepped up its game.

As well as story strands from the last movie forming the subplot to Hunt’s character arc as opposed to the movie being basically a stand alone adventure at the end of the movie we have a nice cameo from Luther played by  a returning Ving Rhames. There is also a mention of the shadowy “The Syndicate” leaving that mix of just enough mystery for the audience to wonder who they are and opening up the all important call to adventure for the next installment. This once again demonstrates that this is a franchise with its finger on the pulse of studio trends and fan expectations and accomplishes both with skill. 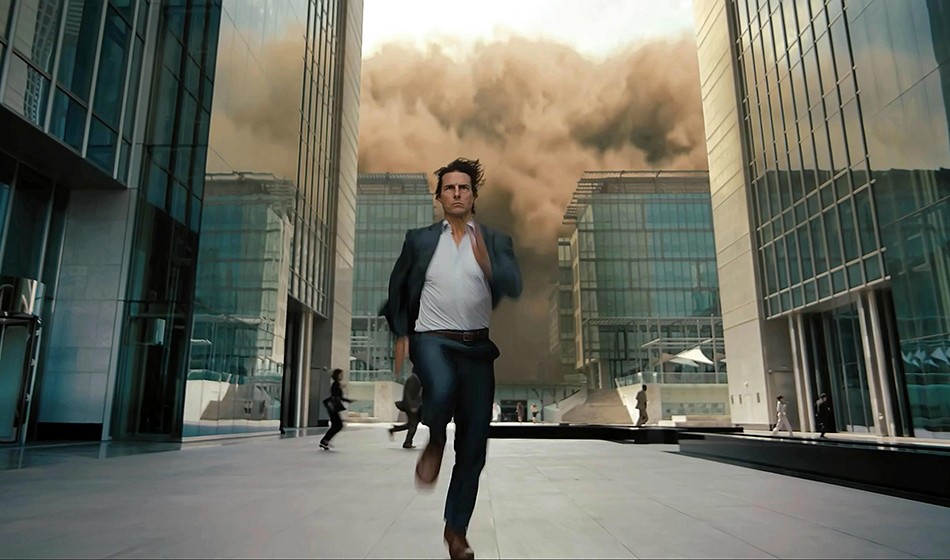 Mission Impossible: Ghost Protocol is an absolute gem of an ultimate action movie. It takes the best of the Mission Impossible formula, throws in new elements and is backed up by a great script, which is itself  a fantastic mix of elements, including humor. There was a great director behind the camera who filmed great locations, fantastic action and an awesome cast who bring all of this together. This lead to the film being a huge success worldwide both  at the box office and critically and the future for the franchise was well assured.

How That ‘Top Gun 2’ Trailer is Tom Cruise’s Ultimate Tower...