But how does the water downed TMNT 2 live up against its ultimate live-action original? 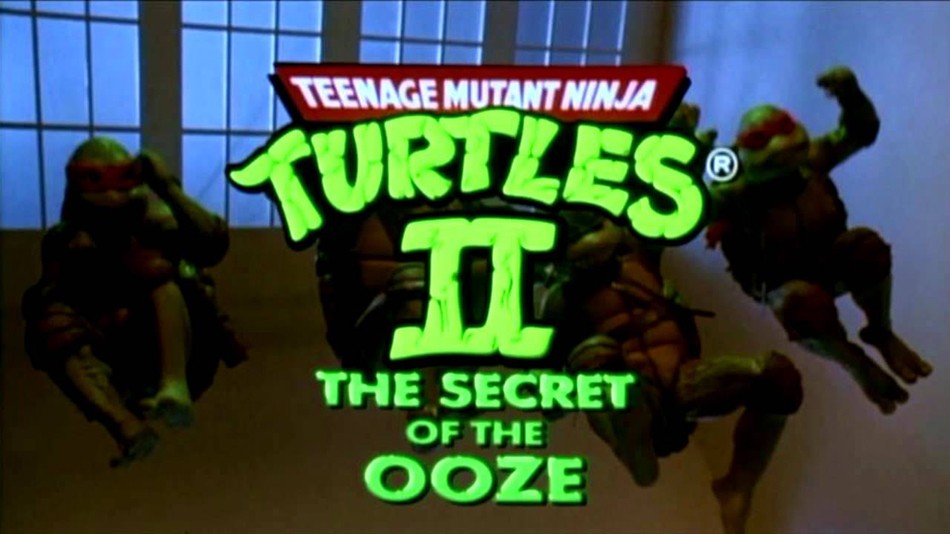 Shortly after saving NYC from the Shredder’s underground tyranny, the Teenage Mutant Ninja Turtles (voiced by Brian Toshi, Robbie Rist, Adam Carl, and Laurie Faso) and their sensei Splinter (voiced by Kevin Clash) turn to their origins in their next adventure. The ooze that mutated them fifteen years ago has gotten out from the Techno Global Research Industries building, coming to the attention of the Foot Clan.

The Shredder (Francois Chau) has gotten his hands on a cannister of the mutagen and Dr. Jordan Perry (David Warner), a scientist affiliated with TGRI. Shredder creates new mutant creatures to oppose the turtles, Tokka and Rahzar (both voiced by voice actor extraordinaire Frank Welker).

With only their newscaster friend April O’Neil (Paige Turco) and pizza delivery boy/martial arts enthusiast Keno (Ernie Reyes, Jr., who also played Donatello’s stunt double in the first movie) to help them, can the Turtles avert another crisis?

Picking up Where TMNT Left Off 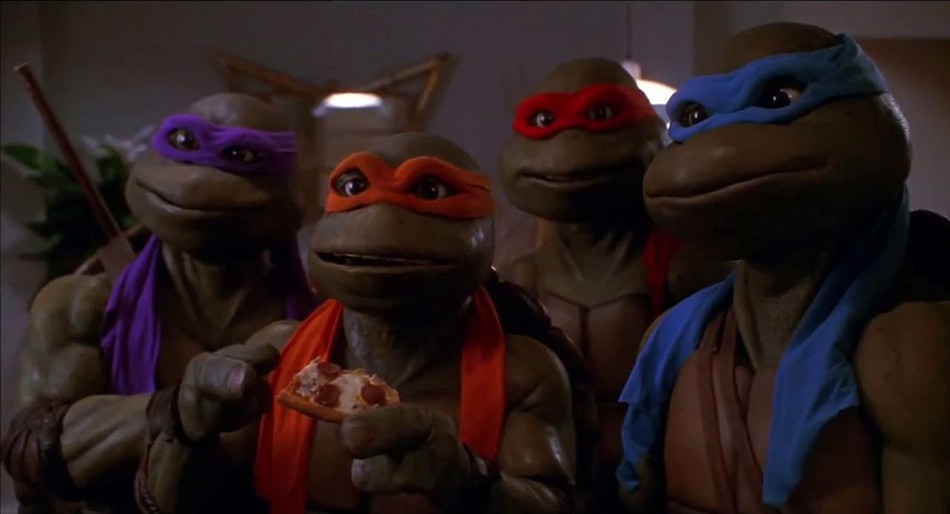 While the first Teenage Mutant Ninja Turtles movie proved to be an action classic and smash hit, it garnered a lot of criticism from parents and moral watchdogs for being “too violent.” The studio took this complaint seriously, deciding the inevitable sequel would be more kid-friendly. They’d shut the parents up and make a box office killing. (Read our UAMC review of the original below…)

And boy, did they achieve this end, toning down not only the action but the dramatic stakes as well. Secret of the Ooze has more the feel of the 1980s TMNT cartoon show than the gritty yet still light-hearted tone of the original movie.

The plot is quite slight, to put it mildly, feeling more like a full-length episode of the 1980s TV series than a feature film. Performances from the human actors are way more exaggerated on the whole. The sets are even more cartoony.

The Shredder is much less of a threat. In the first film, he was formidable and brutal, certainly no fool either. Here, the garbage crusher must have squeezed his head a bit too much, because he does some downright dumb things, like allowing the turtles to give drugged donuts to the simple-minded Tokka and Rahzar as part of a pre-battle “ritual.” He does half of the Turtles’ work for them, that’s how incompetent he is!

The weird thing is that there are moments where the film tries— and this is the best way I can put it—to get existential. Donatello frets about the reason the turtles were created and is saddened that mere chance is the reason they ever came into contact with the ooze. The turtles also mourn that they can never walk freely in the human world due to their mutant status. But none of this ever goes beyond pseudo-philosophical lip service, so I’m not so sure why the filmmakers bothered.

Where are the Turtles in Peril? 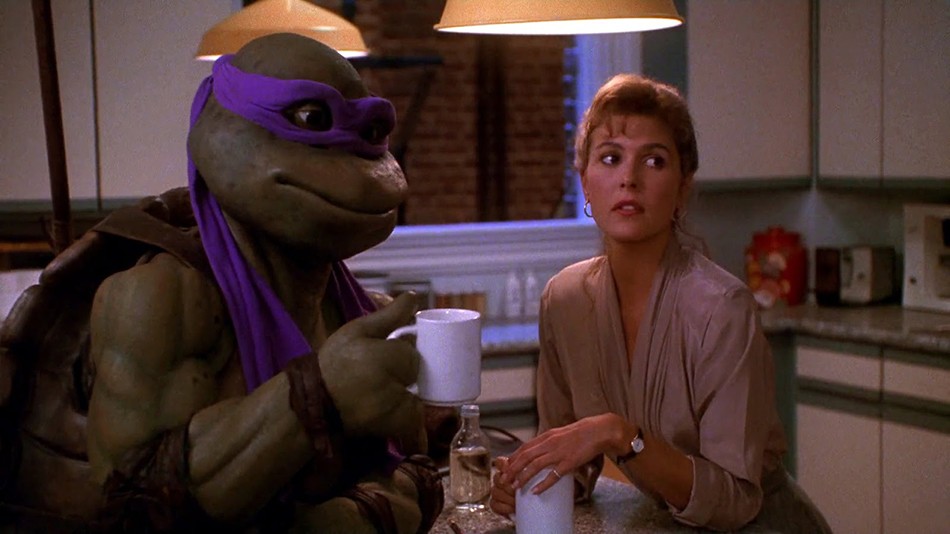 It doesn’t help that the story isn’t very compelling. The first movie had a simple story, true, but it had heart and a sense of real danger. The Shredder’s plan might not have been to take over the world, but he was a danger to the teenage misfits he enlisted, the public he victimized, and the turtles themselves. There was true investment amidst the awesome ninja action and wacky one-liners, which only increased the suspense when things got dangerous.

Here, there’s little urgency to stop the Shredder. Tokka and Rahzar are destructive, but they’re too dumb to be considered a big deal. Even the New Yorkers who see him tearing up the streets just shrug them off. I always believe that half of what makes an ultimate action movie work are true stakes and consequences, which we get so little of in Secret of the Ooze.

Nobody really gets into actual fights in this movie, at least not often and even then, there seems to be a big effort to make sure nothing is ever too violent. It’s more like the bad guys throw punches and the turtles dodge them, or they knock the bad guys over. They are more likely to use yo-yos and sausage links as weapons than nunchucks, swords, or sai (apparently, Donatello’s bo staff was less of an issue).

The main mode of attack seems to be slapstick antics. The first fight scene in the mall is a good taste of what the action is like: silly, exaggerated, and overall harmless, everything the parents wanted when they took their eight-year-olds to see a movie about giant, wisecracking turtles the first time around. Don’t expect Raphael to get knocked into a coma in this one, folks!

At Least they Look Turtle-y 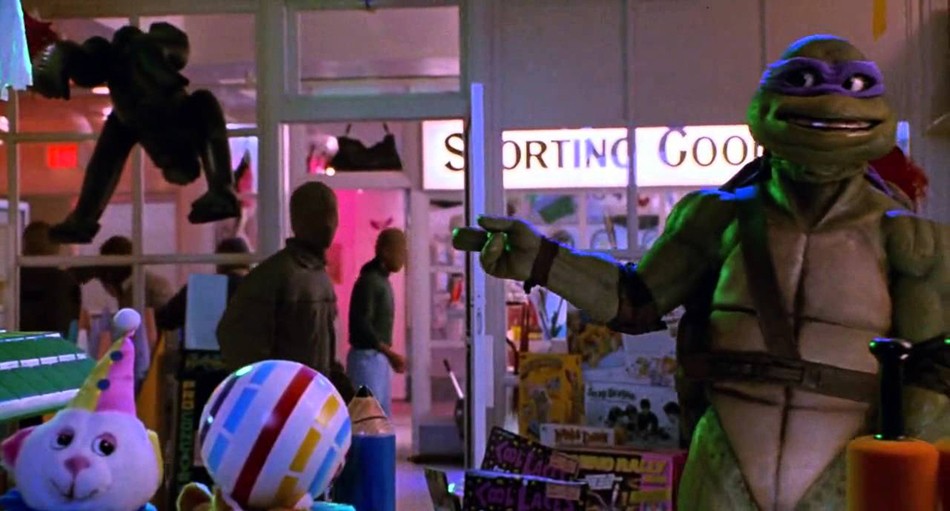 I’ve heard from a lot of 80s and 90s kids that they enjoyed the first Turtles movie because the action was both spectacular and packed with consequence. The turtles were more heroic because they were able to face actual danger from competent, threatening villains.

But I can’t get too down on the movie: at least, it’s fun and the action scenes, if tamer, are still impressive feats of acrobatics from those guys in turtle costumes. They’re able to casually flip and jump as though they were not limited in any way. And the suits still look great (not the case by the time we get to the cinematic nightmare that is Turtles in Time).

And I will say, the rampant cheesiness is charming more often than not, the most memorable cornball moment being the part where the Turtles and their mutant enemies crash a Vanilla Ice concert. Inspired by this quartet of green muses, Ice breaks into an impromptu “Ninja Rap” while the crowd cheers. I don’t think any one scene in the movie nails its tone down more than that.

I’d say this movie is to the original TMNT trilogy what Robocop 2 was to the Robocop series: watered down certainly, but when the ultimate action breaks through, it’s good stuff. And just like the Robocop series, the “badness” doesn’t really kick in until the third installment.


What are your memories and thoughts on TMNT 2? Let us know in the comments or on our Facebook page! 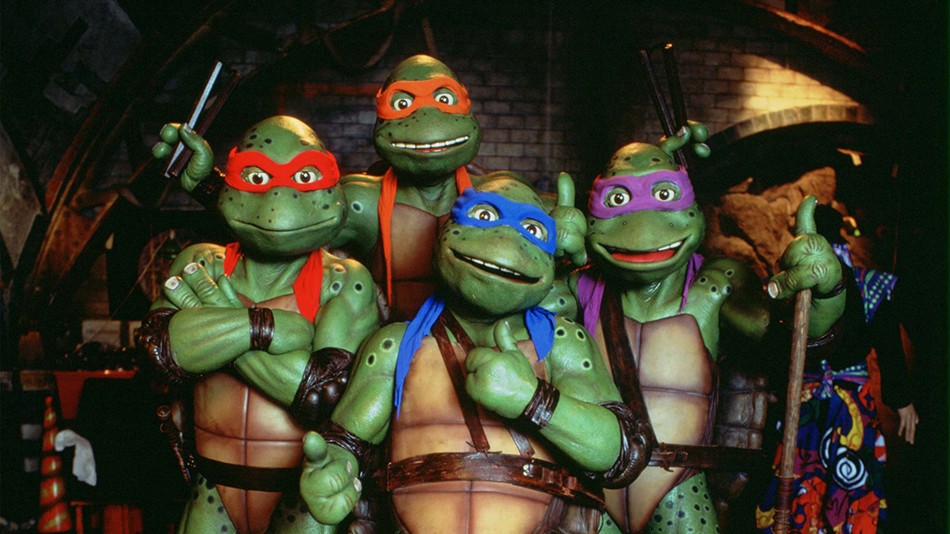