It’s a James Hong-athon with these Top 10 Ultimate Action Movies. 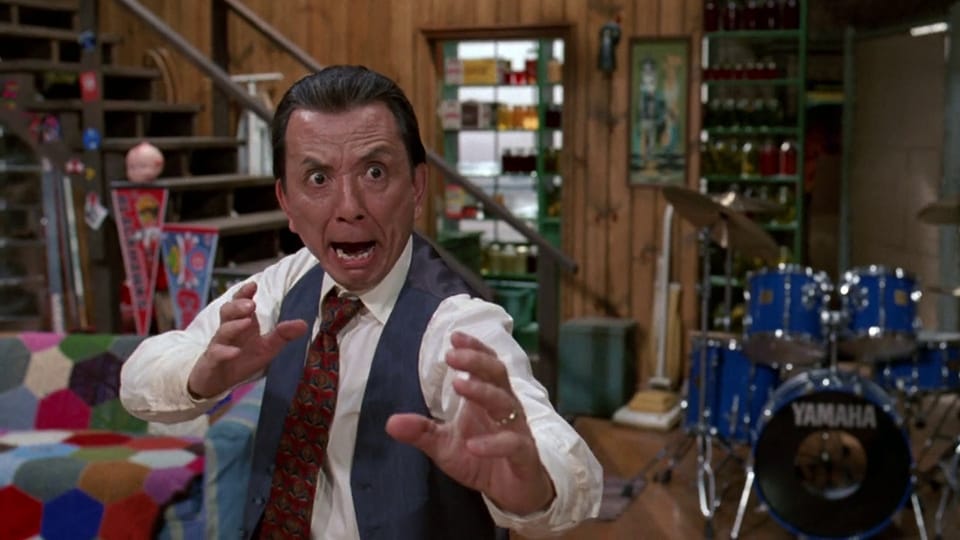 We may be a deeply divided nation at times but almost all of us can agree that legendary character actor and low-key badass James Hong deserves a star on the Walk of Fame. With 67 years of acting experience and over 500 TV and movie credits to his name, the fact that Daniel Dae Kim had to organize a campaign to secure his star was shockingly baffling. What wasn’t surprising was that they raised the necessary $55,000 funding goal in a mere three days. We love James Hong and celebrate his incredible and ongoing career. The man is 91, has four projects in post-production according to IMDB, and looks and sounds as lively as he did in his Big Trouble in Little China days. Come to think of it, James Hong may actually be Lo Pan.

Although he’s had a diverse career in various supporting roles across all genres, Hong’s work in 80s and 90s action deserves special recognition. Whether you needed a Vietnamese General or a Korean Kingpin, James Hong was your man back then. What makes Hong’s performances ultimate though is that he rarely ever played a random goon or sniveling peasant. He convincingly played, and still does, imposing authority figures that commanded respect. Hong may not have the brawn for such roles but he has the brains, cunning, and occasional ancient Chinese magic to pull it off.

Here are the top 10 ultimate action movies, ranked by performance and overall ultimate-ness, that feature James Hong kicking ass and elevating productions from 1984 to 1996. 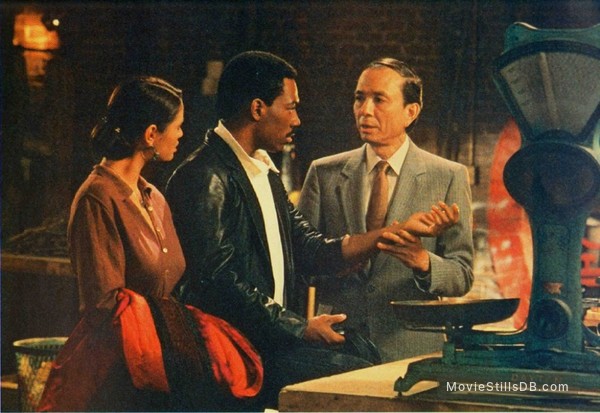 This action/fantasy Eddie Murphy vehicle is a bit of a clunker and had many more ideas than the VFX department could handle. They tried to insert Axel Foley into an international child abduction caper filled with demons, dragons, and dancing soda cans but it just didn’t work, especially when you compare it to an ultimate 80s action/fantasy movie that premiered later that year (keep reading).

Fortunately, James Hong was there to offer crucial plot points and backstory to drive the plot along, from arranging a meeting with the mysterious dragon lady to sending Eddie on a quest to find the mystical demon-slaying dagger. Hong got the job done and made it seem like keeping a smoking she-dragon monster in a musty basement was just par for the course in his world. 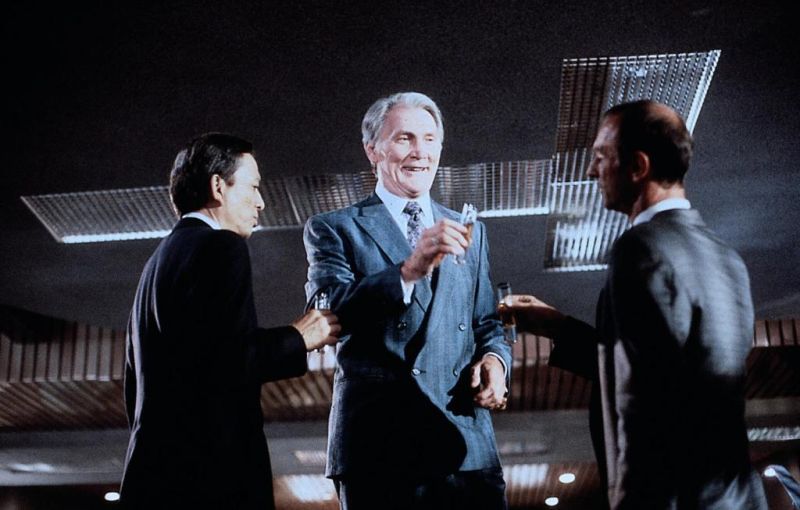 Who do you turn to when you need to brush off two pesky cops who are bringing a bit too much heat down on your nefarious narcotics activities? Quan, the local Triad boss, that’s who. Hong’s Quan has the connections and pull in LA’s underworld to help plant evidence and orchestrate the sinister scheme. He may not have a ton of screen time in this late 80s buddy cop movie but it’s amusing to see a much more sensible James Hong play off of Jack Palance’s comic book villain antics. Next time just take Quan’s advice and off them when you have the chance. Leave the convoluted payback schemes to the Bond villains. 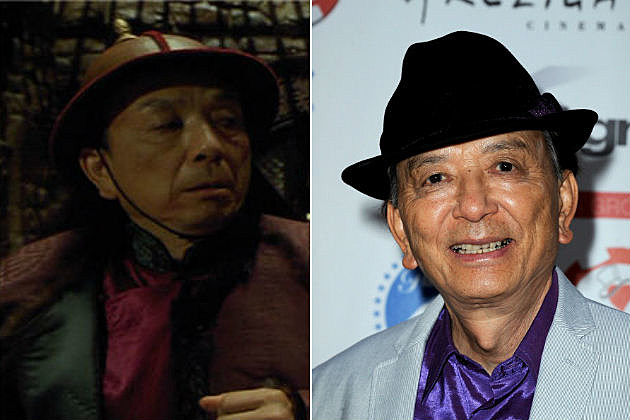 If you want your movie to hit the ground running and prepare the audience for the wild opium-fueled ride to come, a smart director will open with a James Hong performance. Hong plays Li Peng, a rival drug lord in Tibet, who wants a bigger piece of the action. He’s hauled in front of a pre-Shadow Lamont Cranston who runs the opium trade and looks like he fronts a hardcore industrial-rock band on weekends. Li Peng is screwed but still manages to go out with a bang in a short but action-packed showing from the living legend.

Weird side note: I’m pretty sure they feature the same mystical dagger in The Shadow that they use in Golden Child. The dagger has a Tibetan origin in both films too but only the Shadow one flies around and bites people. Crazy coincidence or did James Hong have this lying around in his garage and thought it might look cool in a few action movies? 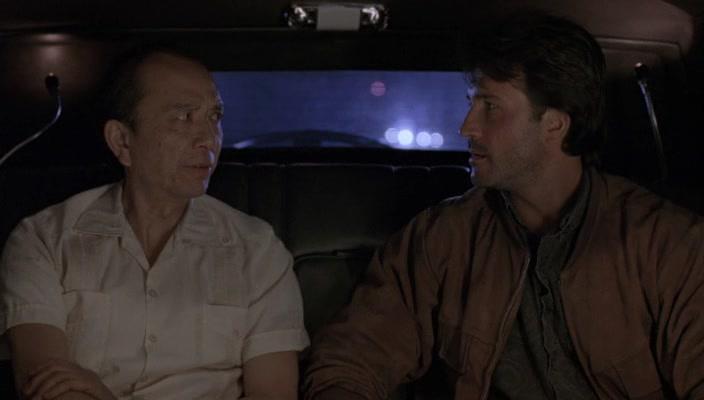 Jeff Speakman takes the lead in his first major role for this somewhat forgotten 90s martial arts extravaganza. He uses his lightning fast Kenpo techniques to take on the Korean mob that murdered his mentor. I wonder who they got to play the mob boss…

That’s right, James Hong plays an untrustworthy crime lord who was suspiciously acquainted with Speakman’s mentor prior to his untimely demise. Hong gets a knife in this one and does his best against Speakman’s flurry of confusing Karate. 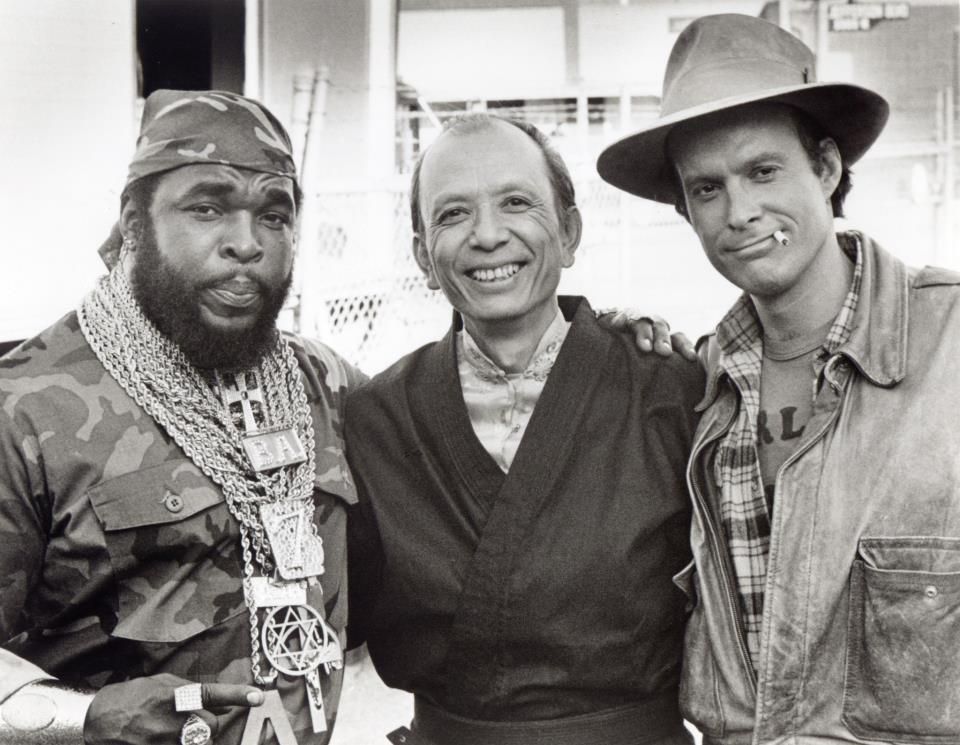 Given James Hong’s numerous TV credits over the years, it seems only right to honor his small screen success with two episodes from the 80’s action classic.

Wan Chu is a Tong mafia boss who, among other things, is running a protection racket in Little China. After shooting up a restaurant that belongs to an old war buddy of the A-Team’s, Wan Chu and his Kung-Fu thugs are going to get their just desserts. It’s another ruthless mob boss role for James Hong and he delivers a top notch villain-of-the-week in this thoroughly enjoyable LA shoot/punch-out that explosively ends in a fireworks factory.

Face is in a world of trouble and adding to it is a vengeful Vietnamese General that takes him hostage in in the General’s compound. Face must pay for dishonoring his daughter during the war. Get this, Face hooked up with a random local girl for a brief time. The General has him tied to a chair as Face waxes philosophically about love. Fortunately, Murdock is flying around the compound in a jet pack and chucking grenades everywhere. Face is rescued and the tables are turned as they take General Chow hostage and stuff him into a helicopter. 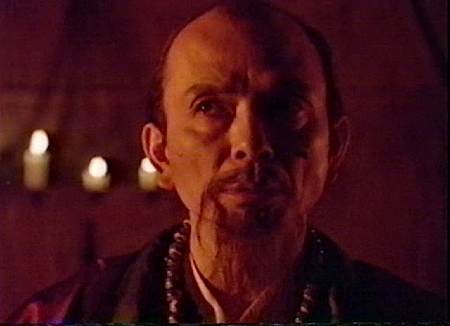 In a movie full of crazy, the scene with James Hong is the wildest one. He plays a Japanese mystic/exorcist who tries like hell to dislodge the ninja demon inside Christie. He makes her change into some heavy-duty bondage gear and take a drag off his magic pipe before the real show starts. It seems to be going well until demon Christie blows her evil stank breath all over his face. This unsurprisingly wears down his resolve to continue. This flick gets a higher ranking than it probably should, only because it looked like a ton of fun to film and Hong must have been having a blast. 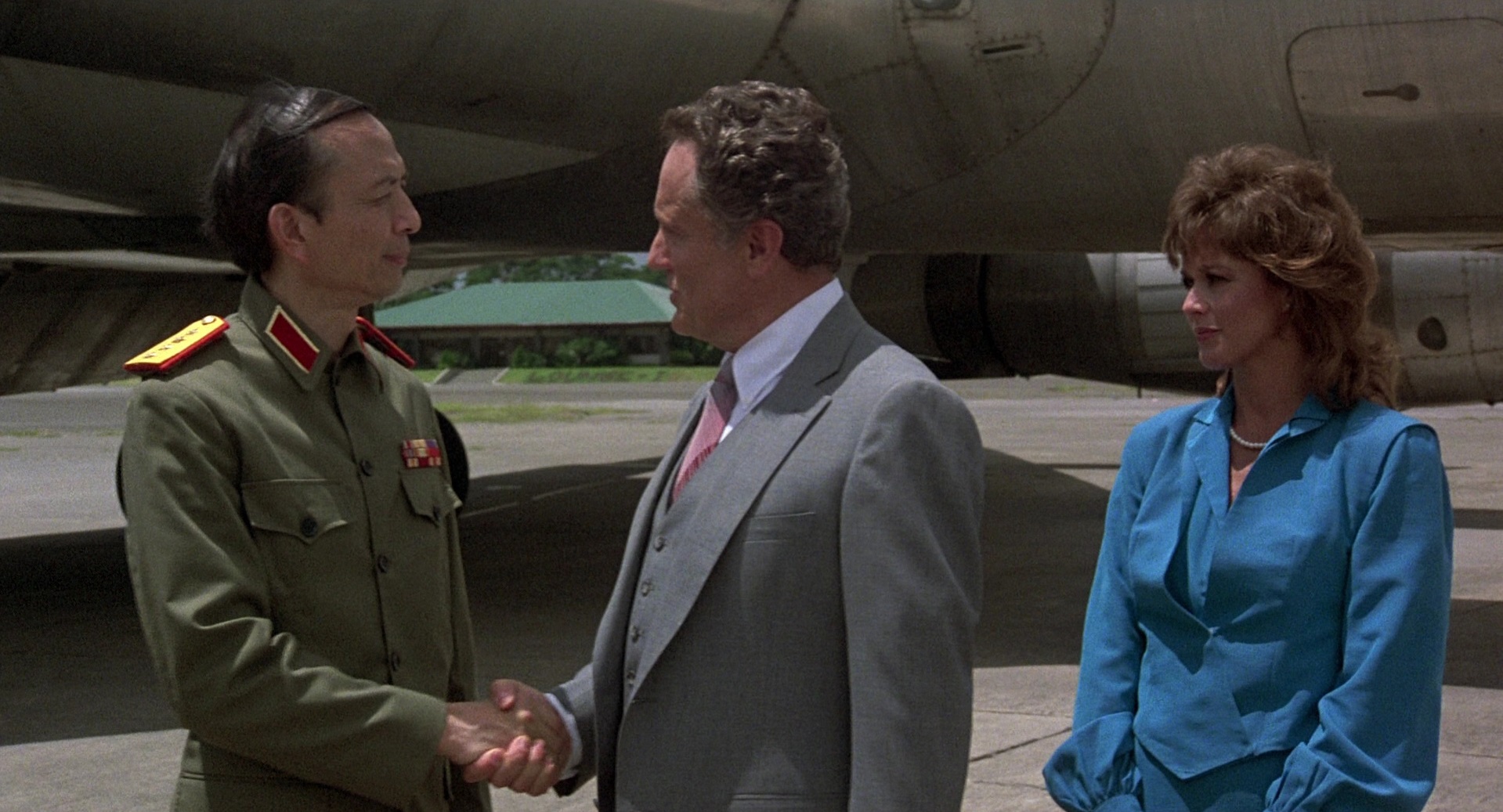 Chinese, Korean, Japanese, Vietnamese…in Hollywood, they’re Asian. Oh well, it kept James Hong in business for six decades. This particular James Hong Vietnamese General stood up to the one and only Chuck Norris, which deserves a few extra points in the ranking. General Trau is a fantastic one act villain that really sets the tone and propels the story forward.

Chuck Norris’ Col. Braddock leaves the General hanging on an unreciprocated handshake at their initial meet-and-greet on the tarmac. Trau soon answers this impolite behavior with a very public denunciation where he accuses Braddock of committing a laundry list of war crimes. Check mate, Chuck! Later, Braddock tosses out the chess board and grabs a knife to help him question Trau in the middle of the night while he’s sleeping. Still, like other great Hong characters, this badass won’t go down without a fight. 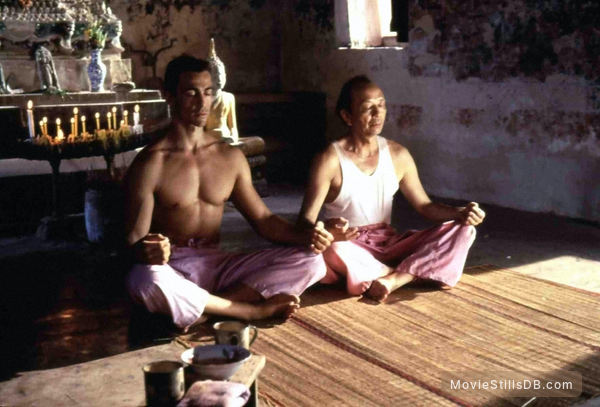 It took eight years to make the sequel but it looks and feels like it was made only a year after the original. James Hong’s Sun meets dollar store JCVD, Daniel Bernhardt, in a prison somewhere in East Asia and agrees to train him in the mysterious “Iron Hand” martial arts. Rent-a-Van-Damme was caught thieving from Mr. Miyagi of all people, so that’s some pretty hard time right there. Sun is a Kumite veteran and believes that not-Frank Dux can redeem himself and get back on the straight and narrow by training for and competing in the next Kumite.

The whole story is told from Sun’s perspective, which he is recounting for his students as a morality tale. Everyone has good and evil within them but these traits aren’t set in stone. Great lesson and a wonderful Hong performance that are deserving of a better karate movie. The other actors pale in comparison and a goofy appearance by Donald Gibb (Ray, the trucker guy buddy from the first one) can’t quite make me care about the outcome. The Kumite itself is a bit sad and cheap looking but the fight scenes are well executed with some talented martial artists showing off a variety of techniques. 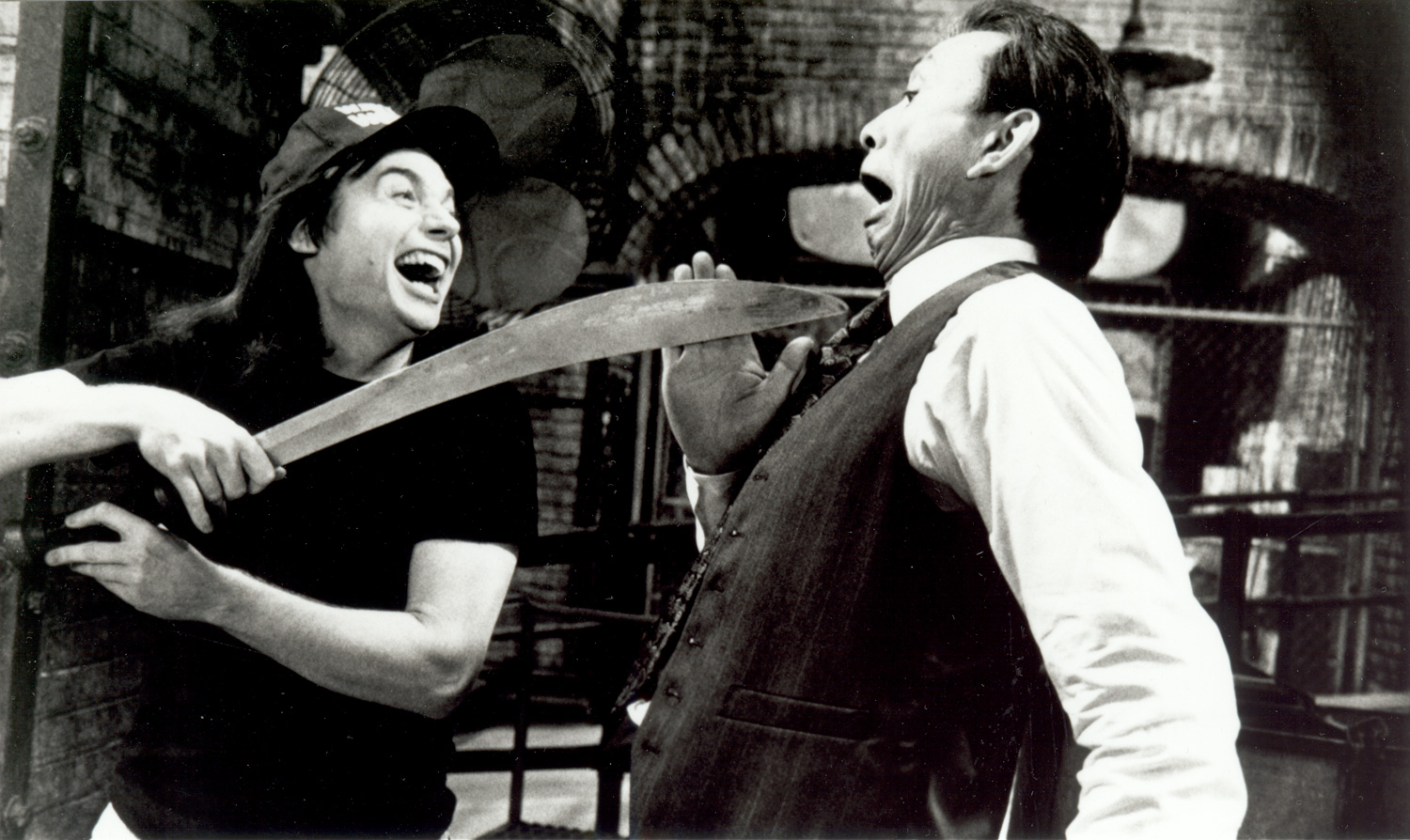 Ok, now before you spit out your coffee all over the screen, yes I realize no one would seriously consider Wayne’s World 2 an action movie but you KNOW the scene I’m talking about. Cassandra’s disapproving father comes to visit at Wayne’s apartment and a kung fu parody breaks out. You probably don’t remember much from that movie but that scene became an instant classic and still makes us laugh today. James Hong’s intensity sells it, the dubbing delivers, and the stunt work is the icing on the cake. Action-packed hilarity in an otherwise forgettable sequel. 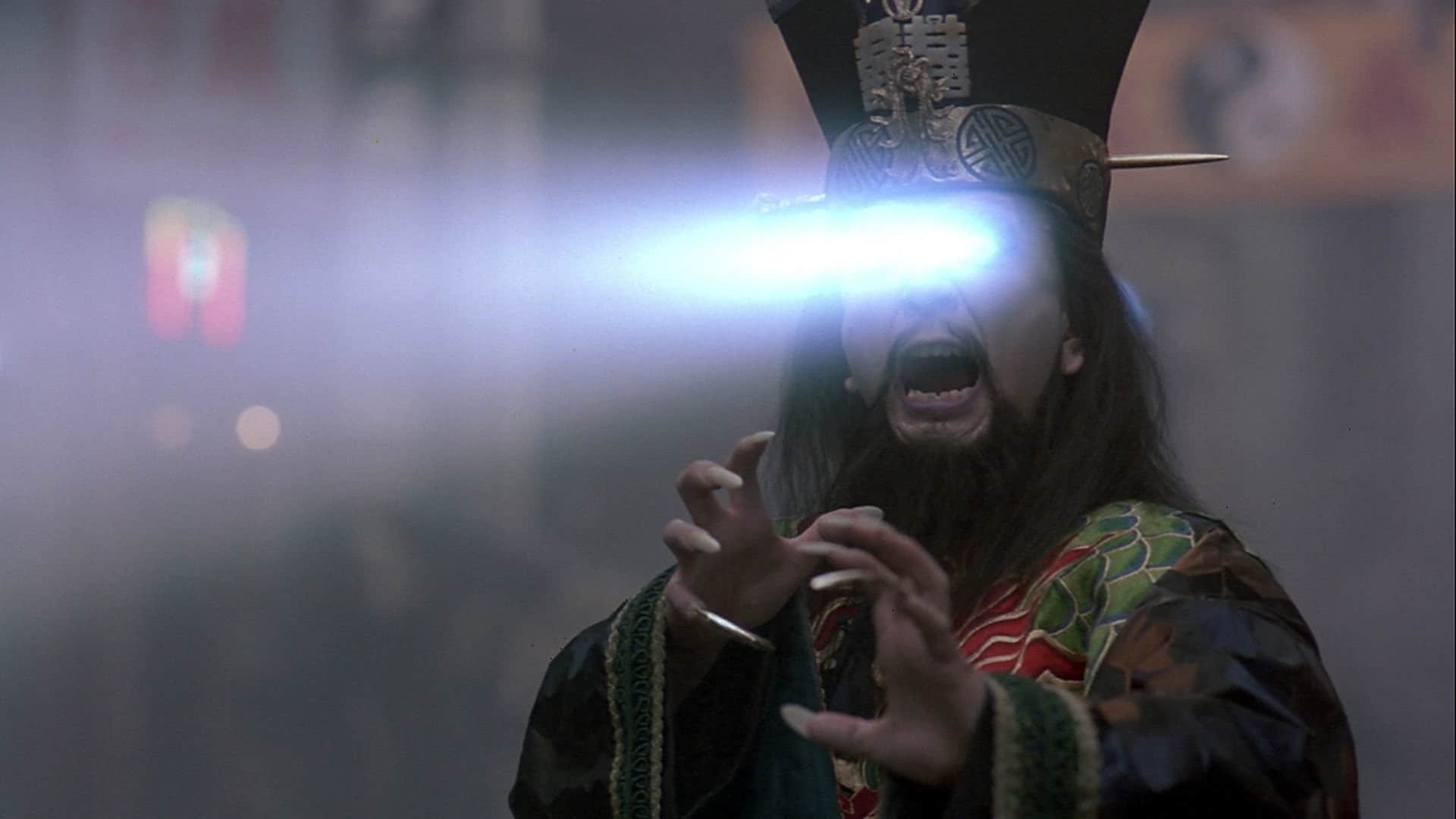 You knew this would be number one after reading the title of the article and how can it not be? Lo Pan is one of the best villains in 80’s cinema. A living ghost, an ancient mystical being that harnesses supernatural powers, Lo Pan is one tough dude with a discriminating taste in women. This really was the perfect role for James Hong. In one instance, he appears to be a harmless, doddering old man and in the next he’s shooting blue energy beams out of his mouth and taking out a small army. Appearances aren’t always what they seem and never underestimate James Hong.

John Carpenter’s narrative themes also align with Hong’s mission to boost Asian-American actors and normalize them as leads or at least play characters that are equal to everyone else. Growing as an actor in the studio system, Hong wasn’t comfortable with constantly seeing minority characters acting as bumbling sidekicks. Big Trouble flipped the script and delivered a unique action movie with a soul, in more ways than one. Lo Pan demonstrates Hong’s range and investment in the characters he plays. His performance is emblematic of his larger body of work that gives his characters dignity, no matter how small the role. For that, he is owed a bit of gratitude and a little brass star somewhere around Hollywood and Vine.